Accessibility links
Mobile Money Revolution Aids Kenya's Poor For the past several years, millions of Kenyans have been using their cell phones as mobile bank accounts. They pay bills, buy goods and send money to family members -- all by mobile phone. 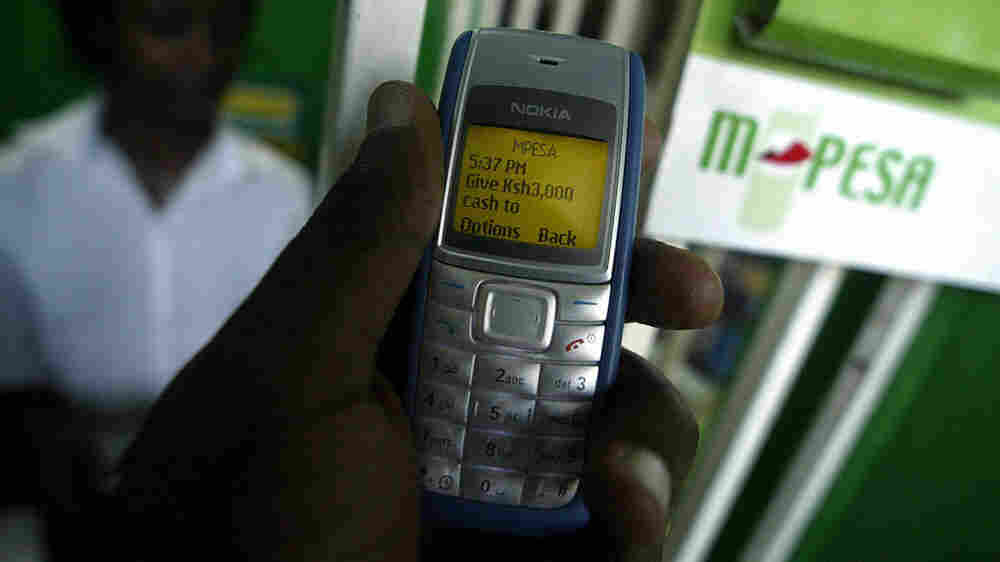 A man sends money through the mobile phone service M-PESA in Kenya's capital, Nairobi, in 2007. M-PESA is having a clear economic impact, including boosting consumer spending in the countryside. Tony Karumba/Getty Images hide caption 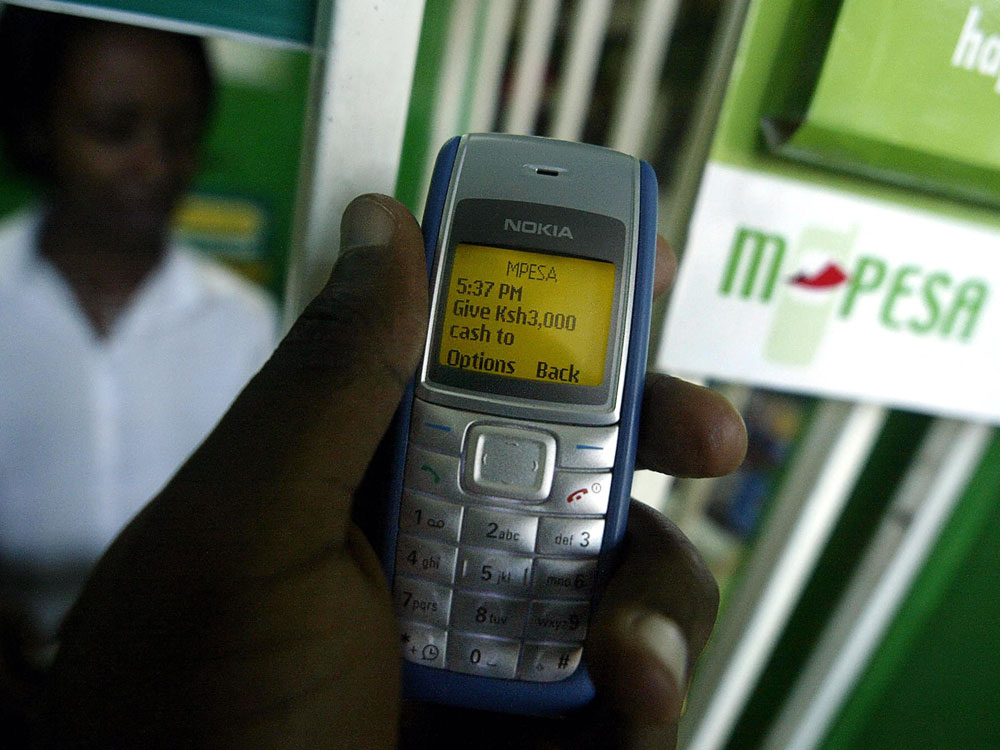 A man sends money through the mobile phone service M-PESA in Kenya's capital, Nairobi, in 2007. M-PESA is having a clear economic impact, including boosting consumer spending in the countryside.

When you think "financial innovation," East Africa doesn't leap to mind. But for the past several years, millions of Kenyans have been using their cell phones as mobile bank accounts. They pay bills, buy goods and send money to family members -- all by mobile phone.

Saimon Outiri works as a cook in a restaurant in Kibera, a sprawling, crowded community in Nairobi and one of Africa's largest slums.

Like most people in Kibera, Outiri doesn't earn very much -- just $4.37 a week. He would like to put that money in a bank, but he can't afford to.

"If I want to open up a bank account, it will cost me some charges, which I am unable to incur," he says.

So Outiri deposits his salary onto his cell phone with the help of an M-PESA agent in a kiosk in Kibera.

M-PESA is the first mobile money transfer system of its kind in Africa. "M" stands for "mobile," and "Pesa" means "money" in Kiswahili. 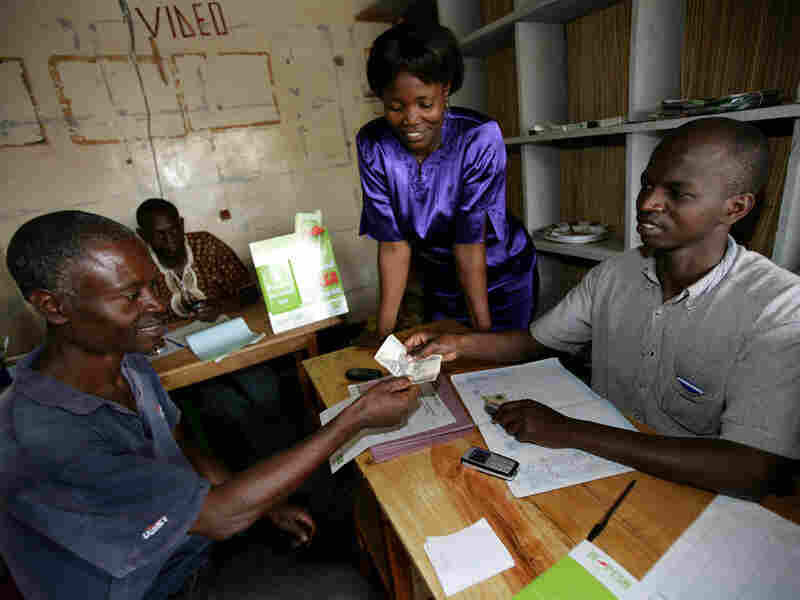 An M-PESA agent helps a client complete a transaction at an office in Bungoma, Kenya, in 2007. Brent Stirton/Getty Images hide caption 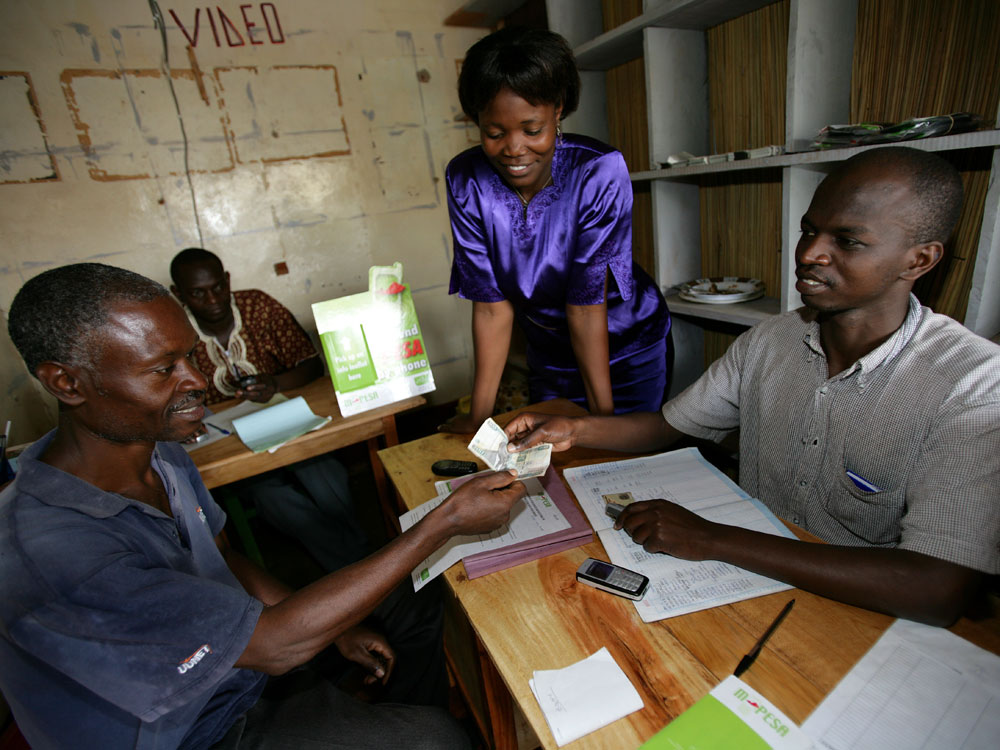 An M-PESA agent helps a client complete a transaction at an office in Bungoma, Kenya, in 2007.

Outiri uses the service for all kinds of things, including paying his rent.

In addition to paying his landlord, he sends money -- or e-cash -- to the cell phone of his mother, who lives 600 miles away. She withdraws the money at an M-PESA kiosk and uses it to buy staples such as salt and sugar.

Outiri says M-PESA also provides security. He'd rather store money on his cell phone than carry cash in Kibera, a place so dicey, some businessmen collect payments surrounded by guards with AK-47s.

Safaricom, Kenya's leading mobile phone company, launched M-PESA several years ago. Originally, the service was just a marketing tool. The company was targeting people without bank accounts -- the vast majority of Kenyans -- to get them to subscribe to Safaricom.

"It has grown faster than we expected it to grow," Mbugua says.

In less than four years, M-PESA now has more than 13 million users and 23,000 agents. Transferring money to a person anywhere in Kenya costs about 37 cents. Paying a bill is free.

Sherri Haas, a co-author of the study, says the M-PESA is clearly having an economic impact. For instance, she says the flood of money transfers from urban areas boosted consumer spending in the countryside. 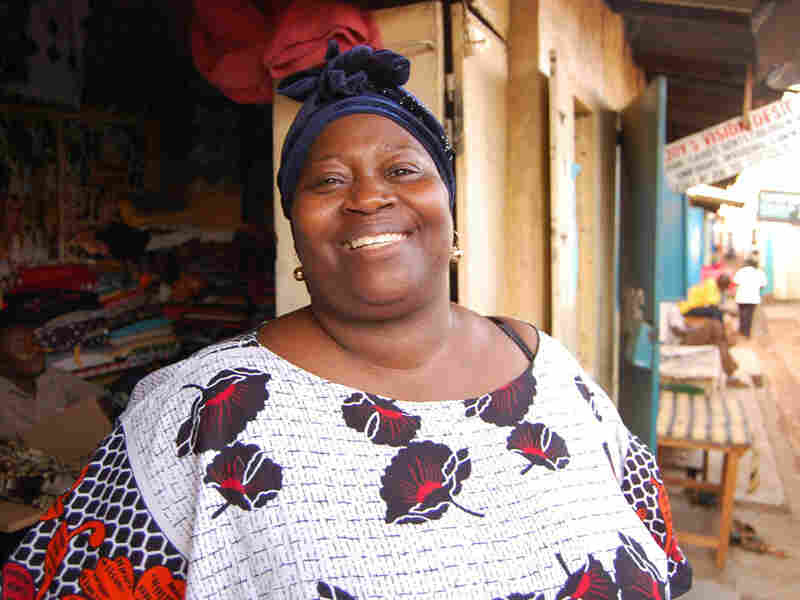 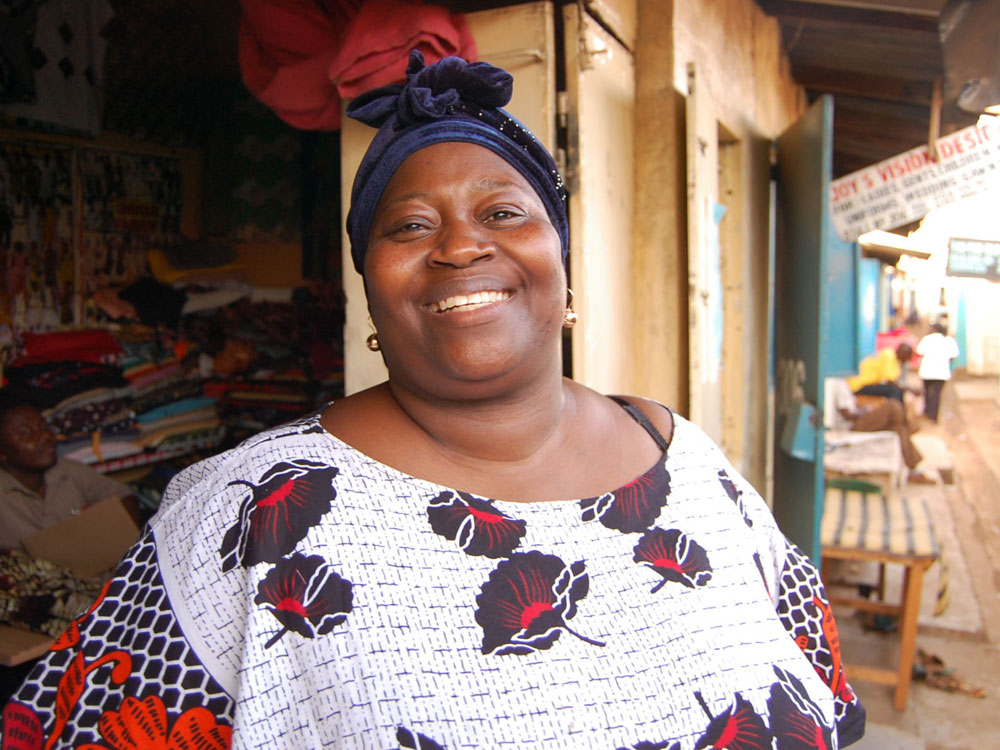 Pamela Omiyo, who sells dresses and suits in the Nairobi slum of Kibera, says M-PESA has helped triple her business in recent years.

"Now that locals were able to receive money into these areas, they were spending their money there as well. Shop owners would report that they had more business because there was more money circulating within these local communities," Haas says.

M-PESA also allows some small-business owners to increase their speed and expand their reach.

Designer Pamela Omiyo runs an open-air dress shop in Kibera. She says her business has tripled in the past several years -- and much of it is thanks to M-PESA.

It used to take days for her to send and receive payment for fabric and dresses. Now, it's instantaneous. Omiyo even uses the service to pay her workers.

In recent months, M-PESA has encountered new competition from other mobile phone companies, but it still dominates the Kenyan market.

And it has expanded on the continent and beyond -- to South Africa, Tanzania and even Fiji.