Accessibility links
7 Billion And Counting: Can Earth Handle It? The planet's population stands at nearly 7 billion, and demographers project we may reach 9 billion by the middle of this century. Already, forests are vanishing, glaciers are melting and almost 1 billion people go hungry each day. When experts look to a world with 2 billion more people, they see India as a vision of that future. 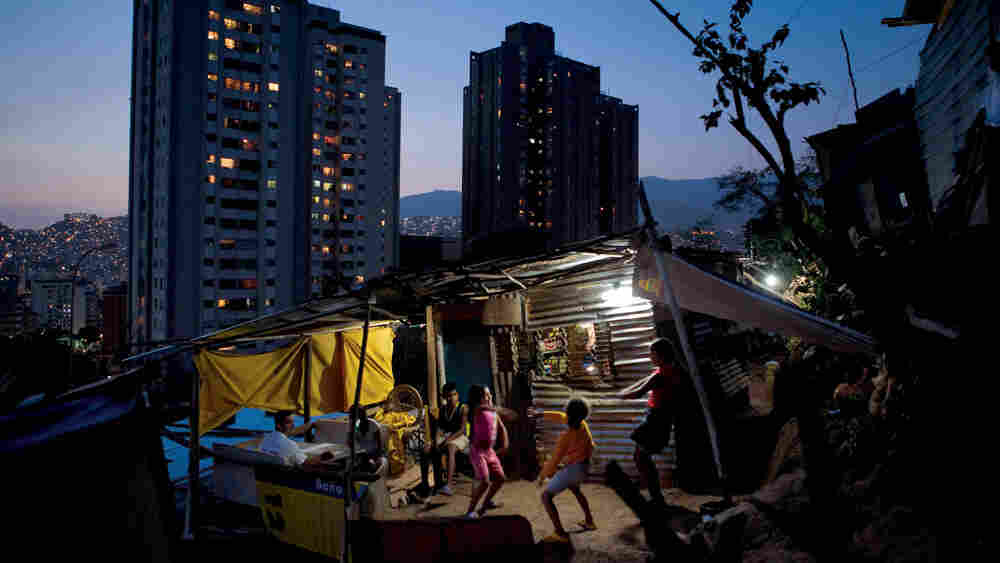 Sharing a hillside with high-rise apartment dwellers, children dance at a shop in one of the squatter communities that ring Caracas, a city of 3 million. Today, one in seven people live in slums. Providing them with better housing and education will be one of the great challenges facing a world of 7 billion people and counting. Jonas Bendiksen/Magnum Photos hide caption

Earth's population stands at nearly 7 billion, and demographers project we may reach 9 billion by the middle of this century.

In the past 50 years, population has grown at a rate never before seen in human history. Pastures have become towns, cities have sprawled across the landscape, and humans now live in places once considered remote. The change is so dramatic that some scientists now refer to this as "the age of man."

But as humanity's reach expands, forests are vanishing, glaciers are melting and almost 1 billion people go hungry each day.

Robert Kunzig is a senior editor for National Geographic and author of this month's cover story, "7 Billion," which considers the possibility of the global population overwhelming the planet.

He tells NPR's Neal Conan that he believes India is emblematic of where current population growth is taking us.

Population Projection: Your 7 Billion Neighbors And What They Mean

"I spent a few weeks there," he says, "and there's really no place like India to get the experience of being immersed in a crowd." Kunzig describes the heat hitting Western visitors "like a brick," and dust swirling.

He says he visited two very different places in India -- the South, where populations have stabilized, and Delhi, which is still growing.

But it still lacks the infrastructure to handle the influx.

"The government tries to plan, but it's really just sort of overwhelmed by events, so people make their own way," Kunzig says. He adds that while there are "outright slums and shanty towns," there are also neighborhoods where people are building their own apartment buildings and making their way, stealing power from the electric company. Kunzig calls those neighborhoods "a hodgepodge of worlds -- cows in the streets, satellite dishes on the roofs."

Because of that hodgepodge, Kunzig says he was optimistic when he left India.

"There's a tremendous energy there," he says. "I met people ... that have come in from the countryside, have built their own homes and are now devoting themselves to the education of their children."

Richard Harris, a science correspondent for NPR, notes another kind of energy related to this growth: the energy being used by these growing populations, and the impact that has on the Earth's atmosphere.

"It's not just body counts, it's our lifestyles and how much resources we consume," he says.

Because of that, some think population trends are less important than energy use and lifestyle trends when it comes to the planet's future health. Consider that as populations grow, so does demand for food, and an expansion of agriculture leads to increased emissions.

Water is another stress point for population growth. Upmanu Lall, director of the Water Center at Columbia University, grew up in India at a time when developing the infrastructure to deliver water was a major concern.

"Today, the situation has changed dramatically," he says. "The question today is one where the resource itself has become significantly depleted in many parts of the country."

Consider Delhi, which has a population of around 22 million. One of India's largest rivers, the Yamuna, flows by it.

"This river is now essentially a sewer over most of the year," Lall says. So today, agricultural pumping, mining and Delhi's water consumption have depleted the groundwater resources of surrounding areas.

But it isn't all bad: Kunzig says the predicted population boom could help boost countries previously classified as part of the developing world, such as India and China.

"We tend to think of countries as locked in certain categories," he says. "The population boom has, if anything, been helpful to evening out the stratification."

Countries like India and China also have young populations with lots of workers, few kids and elderly people to support.

"They're catching up fairly rapidly in terms of income, also in terms of energy use and resource use," Kunzig says.

But Lall is less hopeful, and fears for India's ability to meet the food needs of its population.

"When I was young," Lall remembers, "if there was a drought, we stood in lines for days on end to get food at controlled prices from government shops."

These days, India periodically exports food, but Lall says it comes at a cost: "dramatic extraction of water and dramatic utilization of land and the degradation of the soil."

"India is an enigma," he says. "Despite all the chaos, somehow things actually work. So the fact that the population has nearly tripled since I was a kid and things are better, gives the hope for optimism."

Innovation has helped humans squirm out of projected crises in the past, and it remains to be seen, Harris says, whether we can keep doing that in the future.