Accessibility links
U.S. Uses Birth Control To Rein In Wild Horses The Bureau of Land Management is using birth control to whittle down the population of its herd of wild horses in the West. Right now there are 12,000 more horses than the range can support.

A wild horse at Assateague Island National Seashore in Maryland. The horses on the island are not given supplemental food or vet care, but the National Park Service darts its mares with a birth control vaccine to help reduce the size of the herd. Serri Graslie/NPR hide caption 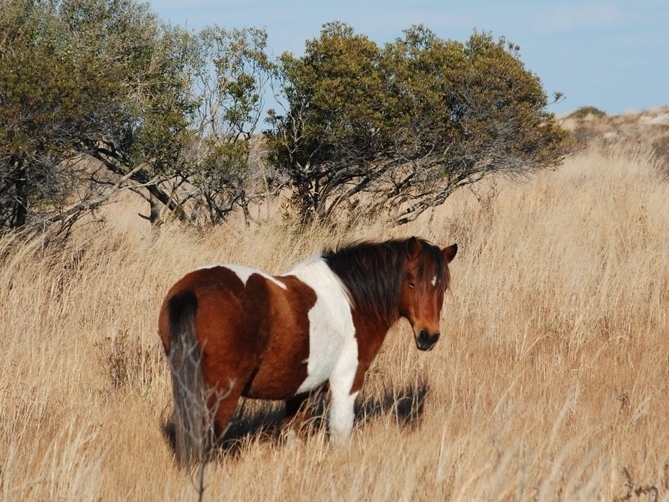 A wild horse at Assateague Island National Seashore in Maryland. The horses on the island are not given supplemental food or vet care, but the National Park Service darts its mares with a birth control vaccine to help reduce the size of the herd.

Mustangs often evoke great nostalgia for the lost American West. But today, there are too many of them, and they're causing problems for their government caretakers.

For decades, the Bureau of Land Management has struggled to reduce the size of its herd through adoptions and roundups. But it's also trying another method: birth control.

It used to be cowboys who rounded up wild horses. Now it's helicopters. The BLM has used them for years to herd mustangs in terrain impassable by cowboys and four-wheelers.

In one YouTube video from a roundup in Nevada, a herd is thundering across rugged hills as it's chased by a low-flying chopper. The horses are funneled into a holding pen where they slow, then stop. Confused by the sudden confinement, they circle looking for an exit, and kick up snow as they bang against the metal corral.

Roundups are never perfect, but they're necessary, according to Tom Gorey, spokesman for the BLM's Wild Horse and Burro Program. The bureau has been in charge of the horses since passage of the 1971 Wild Free-Roaming Horse and Burro Act.

More Horses Than The Government Can Handle

Gorey says right now there are 12,000 more horses than the range can support.

"When that happens, we are mandated under the law to remove the excess horses," Gorey says. He says the population can double every four years.

There are more than 38,000 wild horses and burros in 10 Western states including Nevada, California and Wyoming. The BLM says there's not enough food or water to sustain them, and it says all their trampling hooves can destroy habitat for other animals.

This video shows a wild horse roundup by helicopter.

But activists say roundups are dangerous and can be deadly. Panicked mustangs can trample other exhausted ones, and worked-up stallions may fight.

Wild horses aren't overpopulated, just overcrowded by cattle which graze the same land, says Suzanne Roy, director of the American Wild Horse Preservation Campaign. Roy says there's a better way to manage the mustangs. "It would involve shifting resources away from roundup and removal strategies to management strategies on the range," she says

That can mean removing cattle and introducing more natural predators. But Gorey says allowing the horses to roam and reproduce freely isn't smart. "Yes, Mother Nature could regulate the horses through mass starvation and dehydration, but we don't think that's a viable alternative," he says.

But there is one thing both activists and the BLM agree on: the use of birth control. A vaccine approved by the Humane Society has already been tried with success by another government agency, the National Park Service.

"Yes, Mother Nature could regulate the horses through mass starvation and dehydration, but we don't think that's a viable alternative."

Allison Turner has managed the wild horses at Assateague Island National Seashore in Maryland for 20 years. The horses here aren't like those in the West -- they're pony-sized and have distended bellies from eating the salty grass in seaside marshes. During the winter, they sport shaggy coats and are elusive, doing their best to hide from the weather. Even Turner, who sees them everyday, has a hard time finding one on a December afternoon.

"This happens all the time; they've been out every day for the last two weeks," she says.

Turner, a biological technician, stays strictly hands-off with the island's 114 horses and never provides food or vet care. The Park Service wants them to remain as wild as possible.

Lately, she's been tracking down different bands to pregnancy-test the mares. And with horses you can't touch or exactly get a urine sample from, you have to get creative.

"So what I have to do is find the mare that I want tested and just wait until she drops a pile and then I go and collect it," she says.

Using a plastic bag, she collects the sample, freezes it and ships it off for testing.

In the spring and summer, Turner uses a modified rifle to shoot the mares with birth-control-loaded darts. The vaccine she uses is called Porcine Zona Pellucida, or PZP, and comes from a protein found in pig eggs. When it's injected in any female animal other than a pig, it temporarily blocks fertilization.

Jay Kirkpatrick of ZooMontana is a scientist who has pioneered use of the vaccine in wild animals. To date, he estimates he has vaccinated more than 27,000 animals including bison, wild elephants, urban deer and zoo animals. He started research on the Assateague Island herd in 1988.

"We treated 26 mares [that year]. And we simply darted them; the dart would inject the vaccine, and the dart pops out and a year later not a single foal was born," he says. "That's the first time that had ever been done."

Kirkpatrick says he admires the Assateague management plan where each mare is allowed to have one offspring during her lifetime. 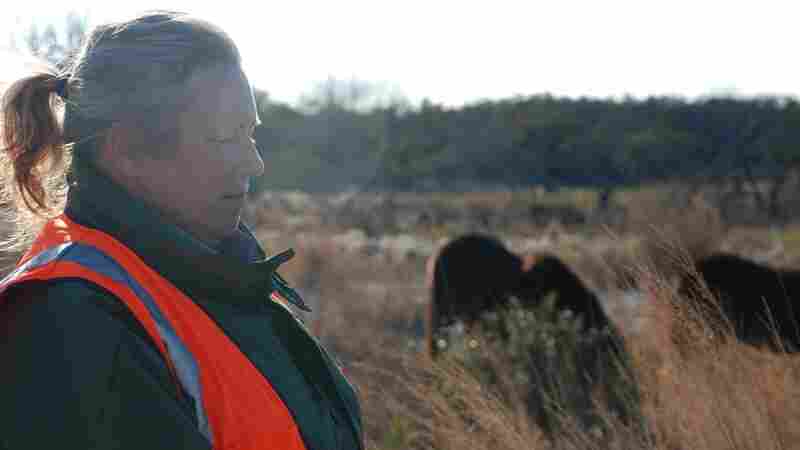 Allison Turner, a biological technician with the National Park Service, has managed the Assateague Island herd for 20 years. Every year in the spring and summer she administers a birth control vaccine to the mares. Serri Graslie/NPR hide caption 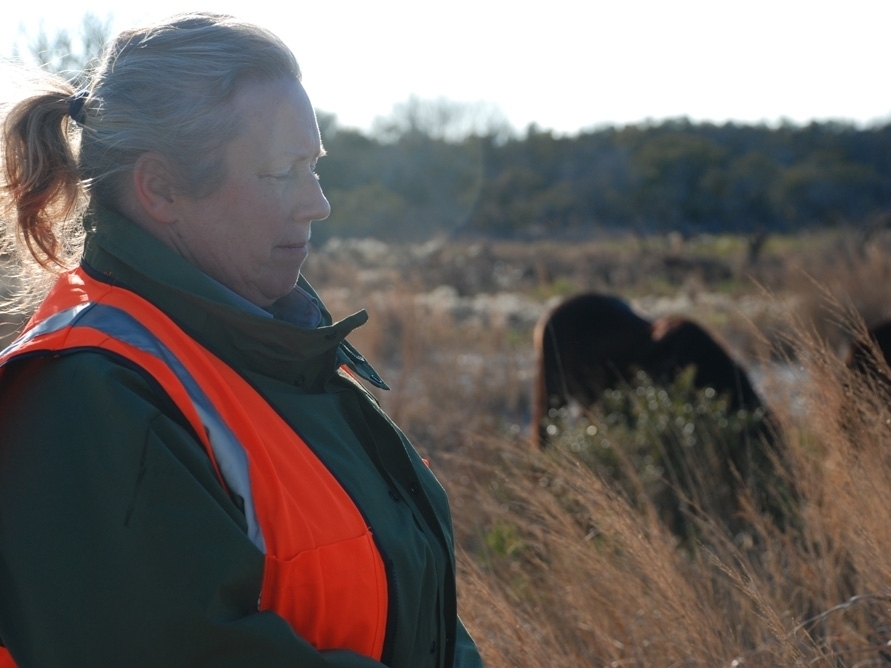 Allison Turner, a biological technician with the National Park Service, has managed the Assateague Island herd for 20 years. Every year in the spring and summer she administers a birth control vaccine to the mares.

Last year only two foals were born on the island, and the BLM hopes to see similar results in the West. The bureau will still round up and remove 10,000 horses this year, but it will also vaccinate 900 by October 2011 using what it calls a "catch, treat and release" model.

It will be a challenge, though, having to track down the mares across millions of acres instead of a small island.

And that's not the only difficulty. Without the stress of multiple pregnancies, the vaccine is helping mares live up to 10 years longer.