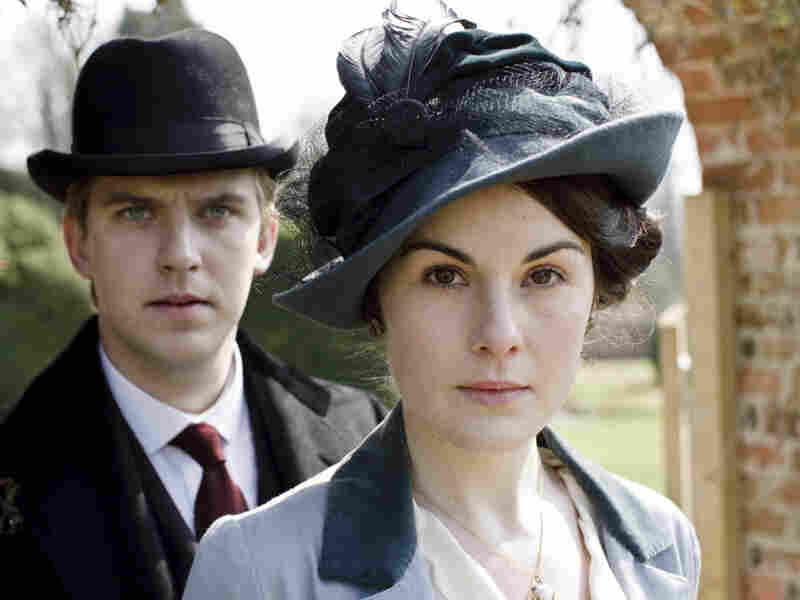 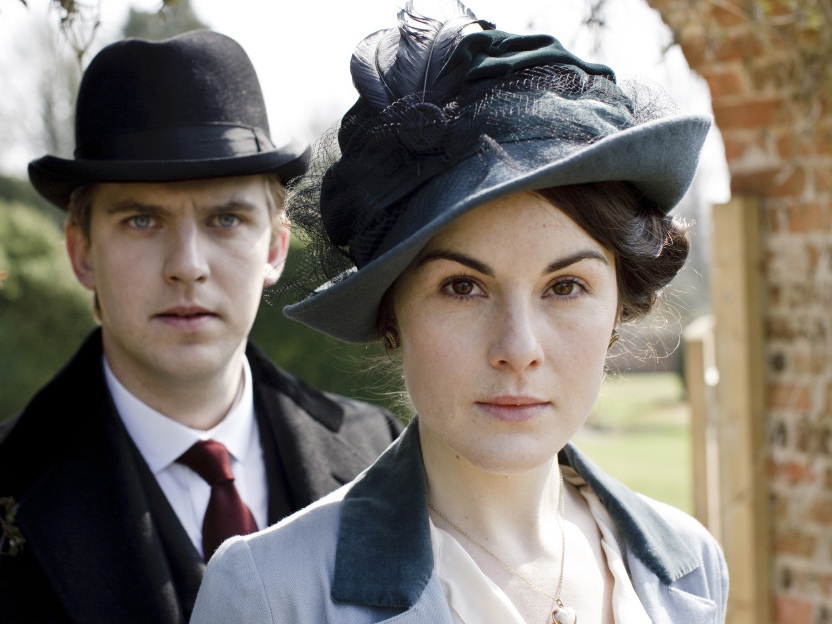 Downton Abbey depicts the lives of the noble Crawley family, including Mary and Matthew Crawley, played by Michelle Dockery and Dan Stevens.

It's a busy weekend for television, with three new series premiering Sunday on cable and public TV -- Episodes and Shameless on the Showtime cable network, and Downton Abbey on PBS.

A few things about these new shows should be noted at the start -- they're all very well-acted, cleverly written, fun to watch and a little unusual. Not one of them comes from commercial broadcast TV, which continues to play things safe and boring this season. And by coincidence, all of them have something to do with the United Kingdom.

Downton Abbey, the latest miniseries import via what used to be known as Masterpiece Theatre, is a great new period drama made the way the British used to make them, back in the days of Brideshead Revisited. The new comedy Shameless, starring William H. Macy, isn't a British show, but it's an American remake of one. And Episodes, a new comedy starring Matt LeBlanc, is about a British sitcom that's being adapted for America, like The Office was -- with the former star of Friends, playing himself, offered the leading role.

Downton Abbey is the best imported miniseries since Bleak House. It's written by Julian Fellowes, who wrote the movie Gosford Park, and it's a kind of modern take on Upstairs, Downstairs. It has the same division between the downstairs people -- the servants -- and the upstairs people, their wealthy employers. Except in Downton Abbey, which takes place in the early 20th century, money is so scarce that the residents of the Abbey may soon lose title to their own estate. And while the servants downstairs iron the morning newspaper so the ink won't smudge the hands of the Earl of Grantham, the headlines themselves deliver some unsettling news about other people of privilege -- aboard the Titanic. Jim Carter plays the head butler, Mr. Carson, and Hugh Bonneville plays the Earl, who turns out to be surprisingly -- and endearingly -- sensitive.

This miniseries pays equal attention down below and up above, with characters that are full of surprises and quirks, and storylines that offer the same. It's not unreasonable to expect a period drama like Downton Abbey to offer scenes of illicit romance and unexpected death -- but at the same time? All that, and there's a fox hunt, too.

Shameless, based on a British series that has run for eight seasons now, stars William H. Macy as an irresponsible drunk with a bunch of kids who cope, mostly, not because of but in spite of him. This American remake, like the original, is written by Paul Abbott, and if you've watched a lot of British imports, you know his work: He's the man behind the detective series Cracker and the original miniseries version of State of Play.

Shameless is a comedy, but a really, really dark one -- one that almost dares you to like its central character. The series is daring in other ways, too. For one thing, Macy, the star of the show, barely appears in the premiere episode, which focuses instead on his eldest daughter, played by Emmy Rossum, and the other kids. But they're strong enough to carry on without him -- which, in this show, is the entire point. 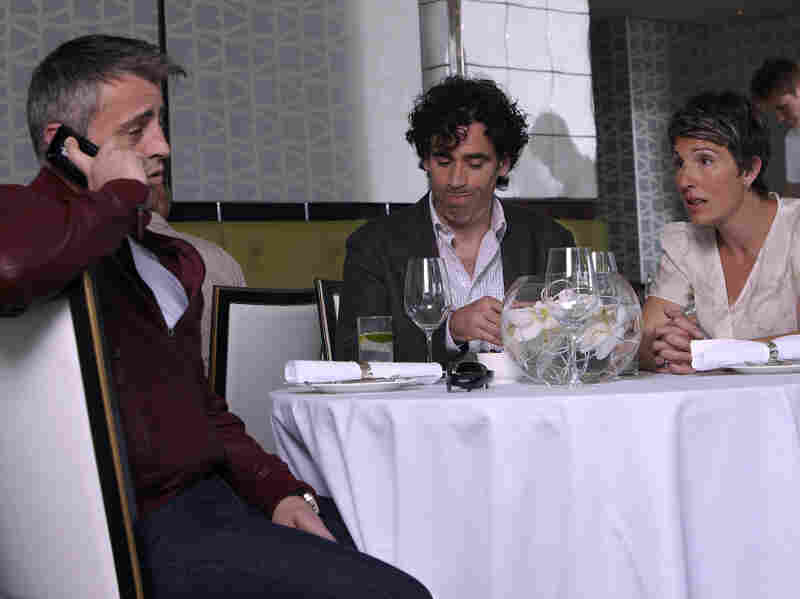 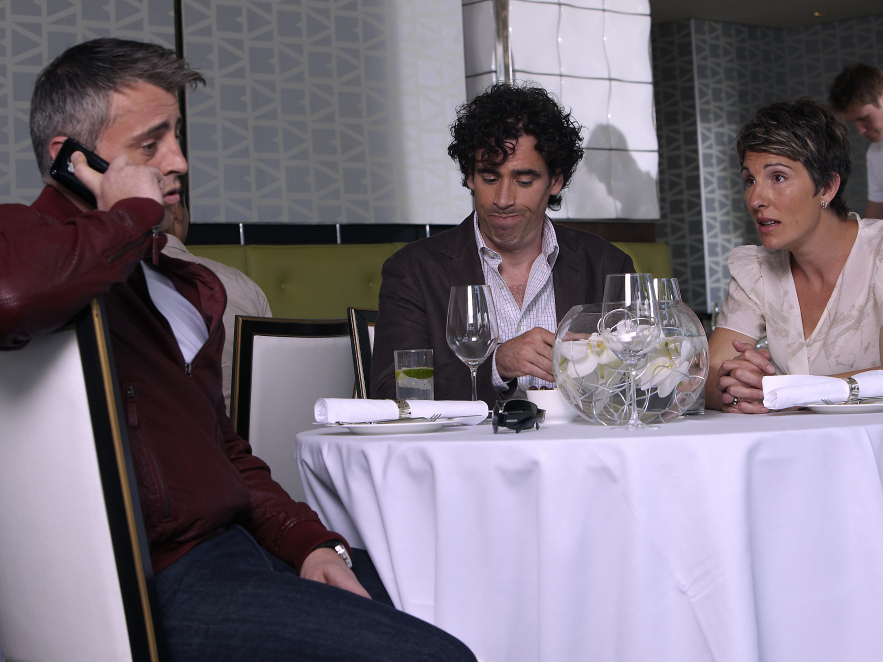 Matt LeBlanc (left) plays himself in the new Showtime comedy Episodes, which also stars Stephen Mangan and Tamsin Grieg as married screenwriters struggling to adapt their British comedy for an American audience.

There's a similar trick pulled in the opening program of Episodes, which stars Matt LeBlanc as an exaggerated version of ... Matt LeBlanc. He shows up in the opening scene, but only to launch a flashback -- which takes up the entire seven episodes of this show's first, limited season. He doesn't even reappear until episode two -- but as with Macy in Shameless, the show works just fine while you're waiting.

The real focus of Episodes is on Sean and Beverly, writers of a fictional, award-winning British TV comedy that an American TV executive persuades them to come to America and remake because it's his favorite show. Only after they sign up and then show up do they realize he's never even seen it.

And in Episode 2 of Episodes, when they take a courtesy lunch meeting with LeBlanc, it's only because they're told he saw and loved their series while making a movie in England. It doesn't take them long to learn that's not quite true, either.

Episodes is unexpectedly good, sharp and funny -- and knows the territory, because co-creator David Crane was one of the creators of Friends. And he doesn't just focus on Matt LeBlanc, either. Tamsin Grieg, who plays Beverly, is especially a joy.

In fact, all three of these shows -- Episodes, Shameless and Downton Abbey -- are pleasures to watch. And not one of them, it's worth reiterating, comes from the standard Hollywood system.