Accessibility links
Strife and Salvation: Beethoven's 'Fidelio' Beethoven's only opera is about a daring woman who dresses as a man, risking all to save her imprisoned husband. Read the story and hear excerpts from this Lucerne Festival production. 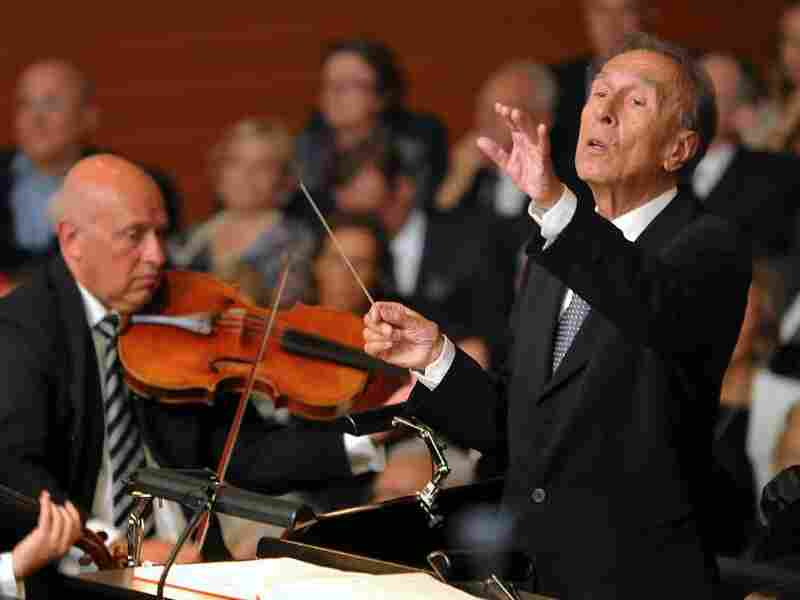 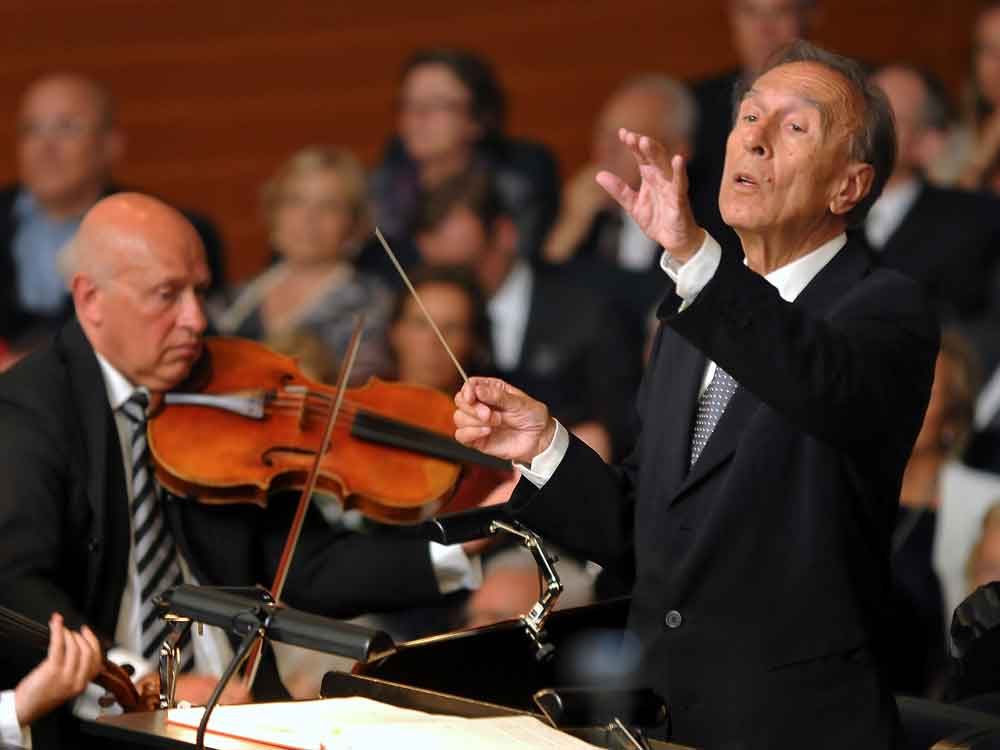 Claudio Abbado conducts this concert performance of Beethoven's "Fidelio" at the Lucerne Festival in Switzerland.

The villain Don Pizarro (bass-baritone Falk Struckmann) introduces himself in Act One with the aria "Ha! Welch' ein Augenblick" -- "Ha! What a Moment" -- when he senses that he finally has his chance to murder Florestan.

Ha! What A Moment

Have you ever heard an opera by Pierre Gaveaux, Simon Mayr or Ferdinando Paer? Names don't sound familiar?

Well, they were all quite trendy in their time. A couple of centuries ago, each of them wrote operas featuring daring wives who risked their lives to rescue their condemned husbands -- a popular plotline in the early 1800s.

Any number of other composers also exploited the trend, and by now most of them are just as obscure as the three just mentioned. That's because Ludwig van Beethoven also took the story into the opera house, with Fidelio, and that brilliant drama has long since overshadowed all the rest.

Fidelio falls into a genre known as "rescue opera," a loosely defined term that was coined well after the fact. It's generally used to describe a type of opera that developed in France at the time of the French Revolution, and quickly became popular all over Europe. And why not? At some point or another just about everyone needs to be rescued -- if not physically, then at least emotionally.

At their finest, rescue operas involve more than just the heroic rescue of an individual from mortal danger. They also portray a rescuer so heroic that he or she willingly risks everything in the cause, with an outcome that signals the inevitable triumph of human will and freedom over injustice and tyranny. Fidelio provides all that, with plenty of drama and emotion to spare.

On World of Opera, host Lisa Simeone presents Beethoven's Fidelio from the Lucerne Festival, starring one of today's most acclaimed tenors, Jonas Kaufmann, in the role of Florestan -- the prisoner in need of rescue. The production also features soprano Nina Stemme as his wife, Leonore, and bass-baritone Falk Struckmann in a dramatic performance as Florestan's villainous nemesis, Don Pizarro.

The Story of 'Fidelio' 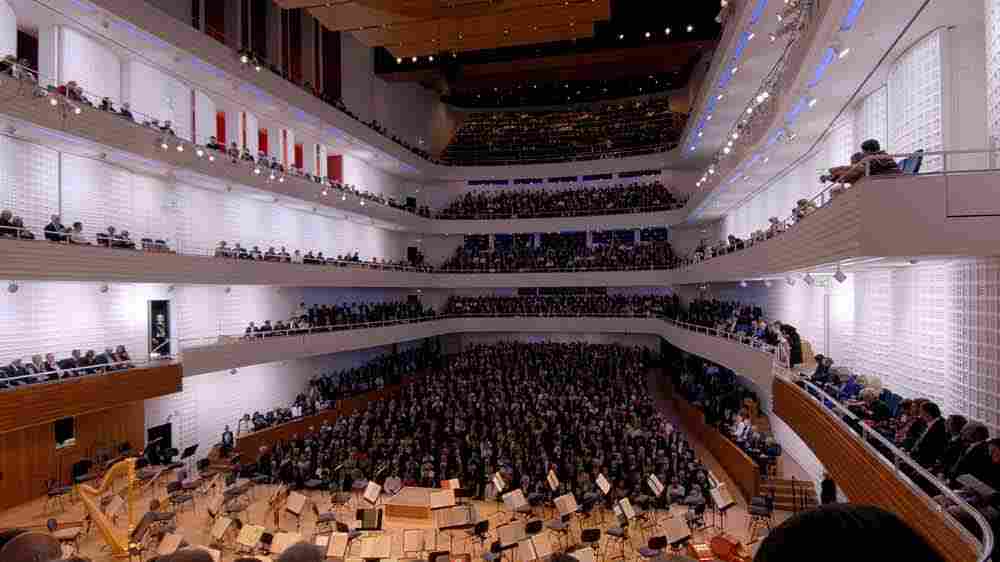 This production of Fidelio was presented in concert at the 1800-seat Lucerne Culture and Convention Center. Jurg Egli hide caption 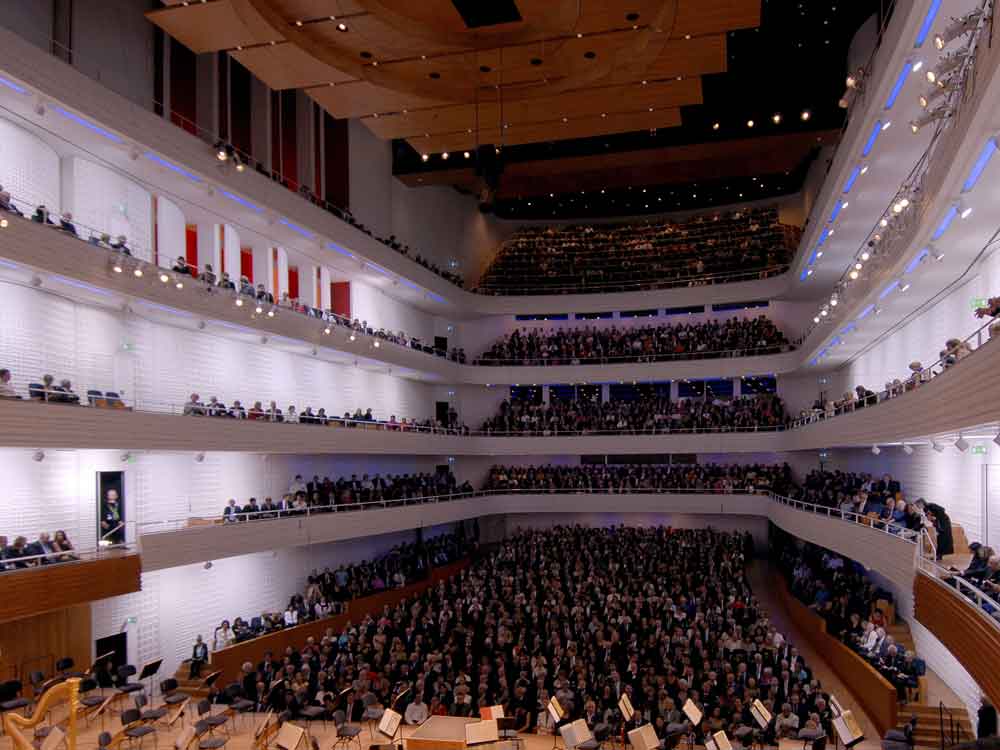 This production of Fidelio was presented in concert at the 1800-seat Lucerne Culture and Convention Center.

As Act One begins, Florestan has been unjustly jailed as a political prisoner, and his loyal wife Leonore has a daring plan to save him. She dresses as a young man, adopts the name Fidelio, and lands a job at the prison where Florestan is being held in secret, chained in an underground dungeon.

The jailer who runs the prison is called Rocco, and after Beethoven's dramatic overture winds down, we find Rocco's daughter, Marzelline in the courtyard, ironing. Jaquino, Rocco's assistant, is in love with Marzelline. But she only has eyes for her father's newest employee, Fidelio.

In a beautiful quartet, Beethoven gives us a glimpse of what's on everyone's mind. Marzelline is elated, thinking Fidelio is in love with her, and Fidelio is worried about Marzelline's obviously deep feelings. Rocco is happy to see his daughter in love, and poor Jaquino is growing more jealous by the minute.

Rocco offers Fidelio his Marzelline's hand in marriage and in a light-hearted aria he warns the two that besides love -- money is also important. But Leonore has only one reason for maintaining her Fidelio disguise: She's hoping Rocco will permit her to help out in the dungeon, so she can find out if Florestan is still alive.

Along the way we meet the bad guy, Don Pizarro, who ordered Florestan's imprisonment. Pizarro learns that the regional minister is planning an inspection of the prison, to see how well the inmates are being treated.  Knowing that Florestan is being held illegally, Pizarro tells Rocco that before the minister shows up, he wants the mysterious political prisoner in the dungeon silenced, for good. He orders Rocco to prepare a grave. Leonore overhears their conversation. In a long, dramatic aria, she's shocked by Pizarro's cruelty, and wonders if the unnamed dungeon prisoner might be her husband.

The act closes with a small act of human kindness, and some of Beethoven's most radiant music. Rocco goes against his better judgment and allows the prisoners to leave their cells for a brief moment, to catch a glimpse of the sun and get a breath of fresh air -- all the prisoners except Florestan. As the inmates emerge into the daylight, singing a luminous chorus, Rocco gives Fidelio his permission to help out in the dungeon. Meanwhile, Pizarro arrives to find the prisoners outside and sternly orders Rocco to lock them all back up.

We don't meet Florestan at all in the first act, but Beethoven makes up for it at the top of Act Two.  After a dark, orchestral introduction, Florestan gets an entire, highly emotional scene to himself -- a long sequence filled with passion and despair. Florestan is half starved and chained to a rock, deep underground. In a momentary hallucination, he envisions Leonore in the form of an angel, coming to save him. Then he collapses.

Rocco and Leonore enter the dungeon to dig a grave, as Pizarro has ordered. When Florestan wakes, Leonore recognizes him immediately, and nearly faints from emotion. But Florestan fails to recognize his wife in her Fidelio disguise.

As the digging begins, Don Pizarro puts his cruel scheme in motion. His plan is to murder Florestan and shove him into the freshly dug grave.  And the gravediggers are potential witnesses, so Fidelio and Rocco will have to meet the same fate. Pizarro approaches Florestan with his knife ready, but Fidelio steps between the two men, draws a pistol and shouts "You'll have to kill his wife first!"

At first, it seems like a stalemate -- but at the same moment a trumpet is heard, announcing the arrival of the regional minister, Don Fernando. Pizarro's plan has failed, and Leonore and Florestan are left to sing a blissful duet.

Up in the courtyard, a crowd gathers around Don Fernando. He declares freedom from tyranny and orders all the prisoners to be released. Everyone, led by Florestan, joins in a chorus praising the resourceful, dedicated Leonore, who has saved her husband's life.