Accessibility links
Judge Nominations Refiled As Vacancies Affect Courts The White House has renominated 42 judge candidates, hoping they will be confirmed this time around after getting stuck in the Senate last year. Experts say the situation is dire: About 10 percent of seats on the federal bench are now vacant, and judges themselves are starting to sound the alarm. 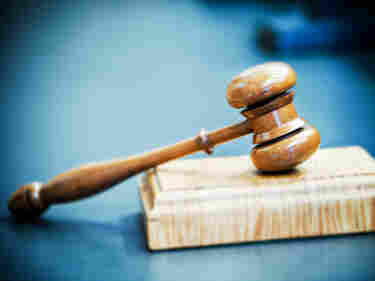 This week, President Obama renominated 42 judge candidates, hoping they will be confirmed this time around. The nominations got stuck in the Senate last year.

Experts say the situation is dire: About 10 percent of seats on the federal bench are now vacant, and judges themselves are starting to sound the alarm.

Judge Alex Kozinski, who leads the California-based 9th Circuit Appeals Court, and his colleagues from the trial courts wrote to the Senate a few months ago, describing their situation as desperate.

"What we're seeing is that a number of our district courts are swamped with cases and really in very bad need of judicial appointments," Kozinski says.

During the 111th Congress, the Senate approved 62 of President Obama's federal judicial nominees — a group that included Supreme Court Justices Sonia Sotomayor and Elena Kagan. But an additional 19 nominees never got an up-or-down vote from the full Senate, and 24 didn't even make it out of committee. (One nominee asked to withdraw his name from consideration this time around.)

What was behind the logjam? Democrats blamed GOP obstructionism and the use of "secret holds," a procedural move that lets a single lawmaker anonymously block the consideration of a nominee. Republicans countered that the last session of Congress was unusually busy and that confirming two Supreme Court nominees took a lot of time.

The Senate confirmed 19 of Obama's less controversial nominees in the final days of the last Congress. Among those who didn't get a full vote? University of California law professor Goodwin Liu, nominated to sit on the appeals court in the 9th Circuit in California.

Republicans have denounced Liu, Obama's most controversial nominee, as a far-left liberal. Liu's name was among those the White House resubmitted to the Senate this week.

Criminal cases in those busy courthouses take priority. That means, Kozinski says, that civil disputes can take years to resolve. Those include cases that challenge the denial of Social Security benefits, deportation orders and important environmental disputes.

And Kozinski is worried about what those delays mean to people who have real problems.

"What they used to say on People's Court: 'Don't take the law into your own hands; take 'em to court,' " Kozinski says. "That's the American way. Once people realize that you go to court and nothing happens, I think they are going to be looking for other ways to resolve disputes."

Lawyers with ties to both Republican and Democratic presidents are highlighting the crisis in judge vacancies. In all, courts in 30 states are suffering under judicial emergencies -- courthouses are especially busy but have gone a long time without a judge.

Chief Justice John Roberts recently called on the Senate to move urgently, and leaders at the American Bar Association are speaking out, too.

"There is no priority higher for the ABA than to make sure we have a fully staffed and fully operating federal bench," says ABA President Stephen Zack.

Zack says that he has been getting an earful from judges who feel overwhelmed and from candidates whose nominations have been going nowhere in the Senate.

"Quite a few nominees came out of committee with no recorded opposition. None," Zack says. "That means that neither side said there was any reason for them not to be confirmed. So this is not a philosophical Republican/Democrat issue. You know, these are issues that are much deeper as far as how government is being operated."

Stuck In The Senate

Senate Majority Leader Harry Reid just created a bipartisan group to examine how to break the logjam with executive nominations.

Russell Wheeler, who studies judicial vacancies at the Brookings Institution, says similar reforms are in order for judge nominees.

"There is a realization that what we have here is just broken government. The government ought to be able to fill vacancies on the bench without having a food fight over almost every one of them," Wheeler says.

Wheeler says that courts along the Southwest border, crowded with immigration cases, are feeling the pinch. And, according to judicial statistics, so are courts in Florida, Georgia and Illinois.

Tim Lewis used to be a judge on the 3rd Circuit Appeals Court in Philadelphia.

"This has become a progressively degenerating process and, frankly, a national disgrace, and I don't have confidence that this will abate any time soon," says Lewis, now counsel at the law firm Schnader Harrison Segal & Lewis.

Experts said the long delays in confirmation are even scaring away qualified lawyers who might want to be judges, but who don't want to endure waits of a year or longer.