Accessibility links
Chlorine Substitutes In Water May Have Risks Water systems across the country are changing the way they treat drinking water because the traditional disinfectant, chlorine, can leave behind toxic chemicals. But alternatives to chlorine have their own unintended consequences, a new report says. 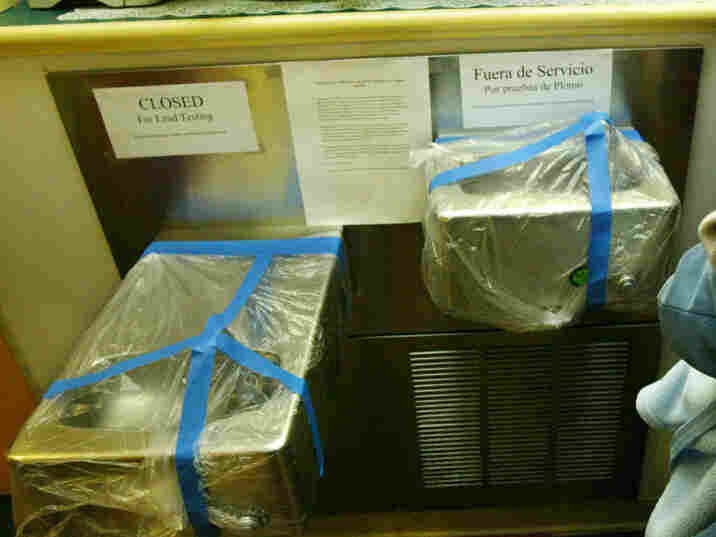 Water fountains in Washington, D.C., were sealed for lead testing in 2004 after tap water was found to contain as much as 30 times the acceptable levels. Earlier, the utility switched from disinfecting water with chlorine to chloramine, but it caused lead in the pipes to leach out into the water supply. Alex Wong/Getty Images hide caption 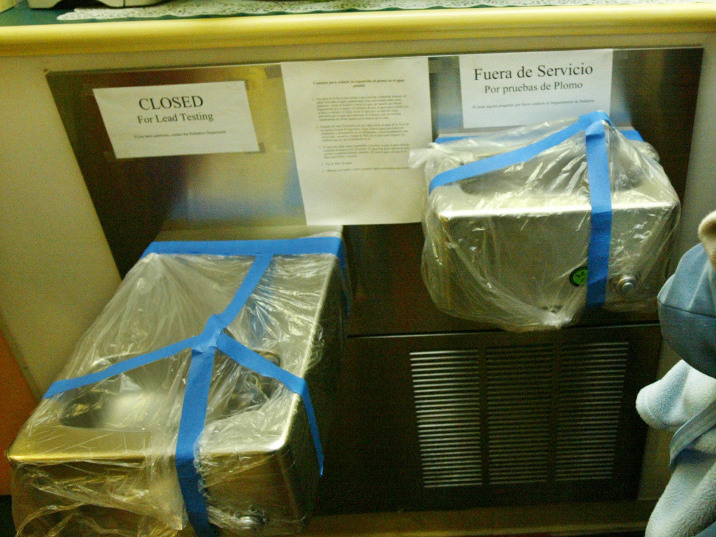 Water fountains in Washington, D.C., were sealed for lead testing in 2004 after tap water was found to contain as much as 30 times the acceptable levels. Earlier, the utility switched from disinfecting water with chlorine to chloramine, but it caused lead in the pipes to leach out into the water supply.

Water systems across the country are changing the way they disinfect drinking water because the traditional disinfectant, chlorine, can leave behind toxic chemicals.

But alternatives to chlorine are turning out to have risks of their own, says a scientist who wrote an analysis in the journal Science.

The change in disinfectants comes a century after water systems in the U.S. began adding chlorine to prevent the spread of diseases like cholera and typhoid. For much of that time, people thought chlorination was completely safe, says David Sedlak from the department of civil and environmental engineering at the University of California, Berkeley.

These byproducts didn't pose a big risk. Even so, the Environmental Protection Agency thought water systems could do better. So the EPA came up with new rules that prompted many water systems to start using chloramine, a chemical cousin of chlorine. It's now used in about 20 percent of the nation's drinking water systems.

Problems In The Nation's Capital

At first, scientists knew only that chloramine didn't produce the same byproducts chlorine did. But over time they learned that it could produce worrisome byproducts of its own, including chemicals called nitrosamines.

"Nitrosamines are the compounds that people warned you about when they told you you shouldn't be eating those nitrite-cured hot dogs," Sedlak says. "They're about a thousand times more carcinogenic than the disinfection byproducts that we'd been worried about with regular old chlorine."

Utilities can take steps to prevent nitrosamines from forming in treated water, and many do. But chloramine turns out to have other risks -- something people in the District of Columbia learned the hard way.

"I saw these results that were very perplexing and they didn't really jibe with the other data that the water company and the EPA had given me," Edwards says.

Over time it became clear what had happened, and why. In those days, Washington, D.C., had a lot of lead pipes in its system. But chlorine had helped keep the lead in those pipes from leaching out.

"So when this well-intentioned switch occurred, suddenly we had just unheard-of levels of lead in the drinking water," Edwards says.

Just how high didn't become clear until Edwards published a study of lead levels in D.C. children a couple of years ago.

Other places, including Greenville, N.C., have also seen lead levels rise with the switch to chloramine. On the other hand, places like San Francisco have switched to chloramine without apparent problems. That's because every water system reacts differently to a change in disinfectants, Edwards says.

"Our water systems have been assembled over a period of hundreds of years and we've got all kinds of materials out there," he says.

These include pipes made from cement, iron, lead, copper, plastic, even wood. And of course the chemistry of the water itself differs from place to place.

Chloramine isn't the only chlorine alternative to run into trouble. Some systems have tried ozone, only to find that it too can create carcinogenic byproducts. Other systems have tried to purify water without chemicals, using ultraviolet light. That works fine, but there's a caveat, Sedlak says.

"Once you turn off the light, the disinfection power isn't there anymore," he says. "And one of the places where we need disinfecting power is in the pipes that take water from the drinking water treatment plant to our homes."

That's because pipe systems tend to have leaks that let in organisms that would make us sick without disinfection. There are still good reasons for many water systems to move away from chlorine, Sedlak says. But he says local authorities need to remember that a new disinfectant may bring its own problems.