Accessibility links
Back On The Job? New Hires Come With Jitters Private employers, like M&H Engineering outside Boston, are starting to hire back workers. But long-term contracts for goods and services aren't as robust as they once were. Companies say this uncertainty is making workers nervous and stifling job growth. 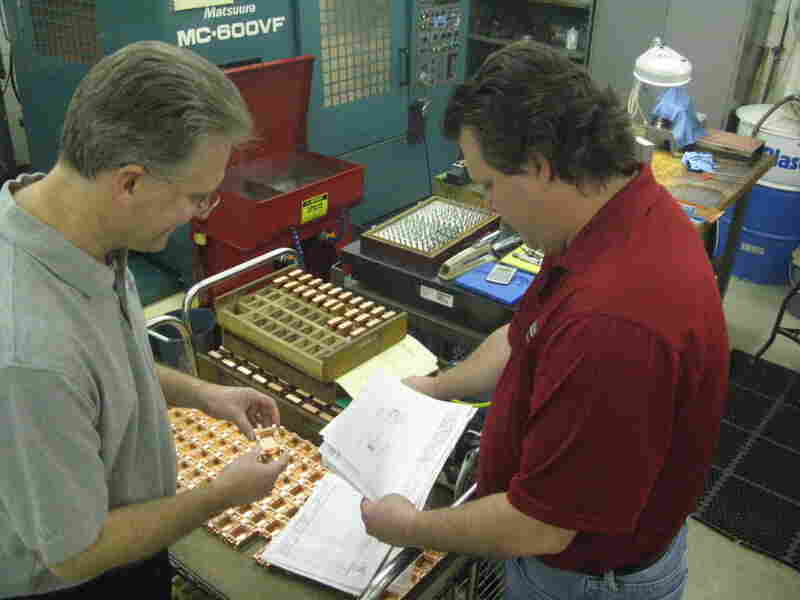 Brothers Michael (left) and Timothy Martens inspect copper machine parts on the factory floor of M&H Engineering. The company has hired back some workers who were laid off during the recession. Chris Arnold/NPR hide caption 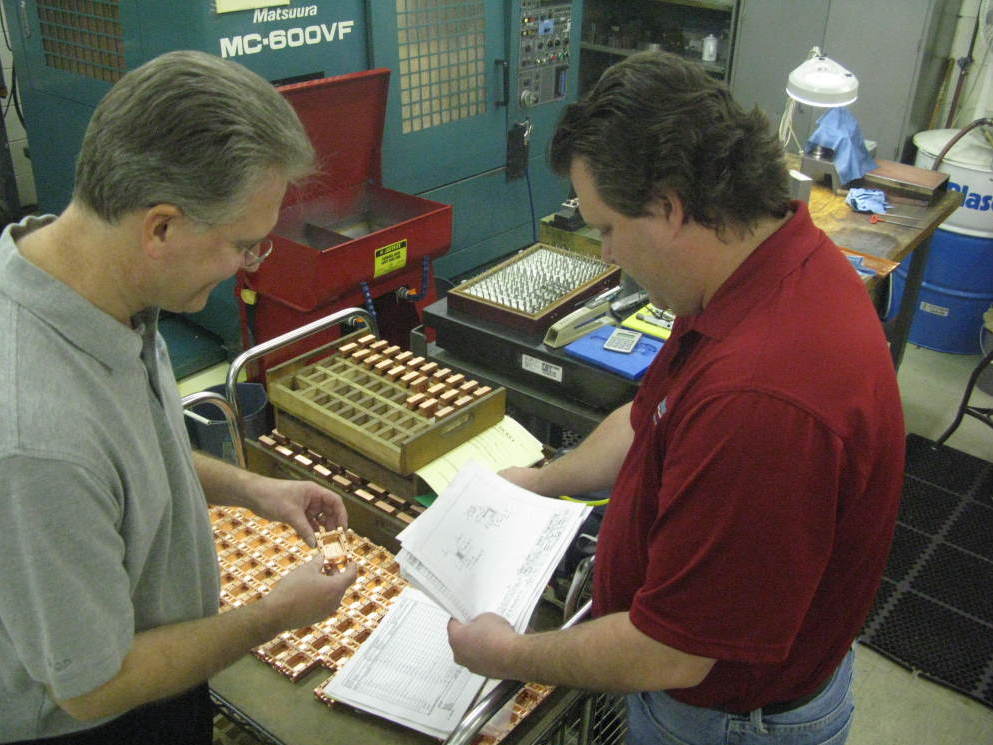 Brothers Michael (left) and Timothy Martens inspect copper machine parts on the factory floor of M&H Engineering. The company has hired back some workers who were laid off during the recession.

The offices of M&H Engineering are housed inside an ordinary warehouse by the side of the highway, just north of Boston.

People driving by would never give it a second glance because the building looks like it is part of a nearby auto dealership.

But inside, the factory floor is like something out of a science-fiction movie. Workers run big computer-controlled metal-shaping machines that make implantable body parts.

"We have worked on artificial hearts, replacement hips, bone screws, knees, pretty much the gamut when it comes to implantable devices," says Timothy Martens, a vice president for M&H. The company also makes other medical equipment and gear for the aerospace and computer industries.

Martens and his brother Michael run this family manufacturing business. Their workforce is about 50 people, double what it was during the recession.

With business finally picking up again, the Martenses have been hiring back many of the people they had to let go, Timothy Martens says.

The Martenses and other private employers around the country are slowly starting to hire more workers. The U.S. economy added 103,000 jobs last month, the Labor Department said Friday. But the unemployment rate, which fell, still remains high -- at 9.4 percent.

Reduced Demand During The Recession

Demand for bone screws and replacement hips actually slowed down during the recession.

"But people are afraid to lose their jobs so they're not going to leave work for three months while they rehab and do that ... to get replacement hips," says Tim Martens.

Michael Martens says even some of his workers delayed getting the medical help they needed. "We had employees that should have gone for an operation, but were actually afraid of losing their job," he says. "We told them, 'No, you're not going to lose your job. Get the hernia operation, get better!' "

After working for the company for almost 20 years, Mike Warren was laid off for a year and a half. Warren, who works in the shipping and receiving department, was recently rehired because orders have been increasing.

Many workers complain of feeling left out and useless when they've been unemployed for long periods of time.

Warren has known the owners of M&H Engineering since kindergarten. The factory production manager, Mark Callahan, says small companies have a family atmosphere.

"I know all their wives [and] all their children, so when you let the guy go that's what you're thinking -- you're thinking of his whole family," he says. "It tears your heart out. But sometimes it's what you need to do as a business. So, you do it." Callahan says he's glad to be calling those people and offering them their jobs back.

While workers are happy to return, Callahan says there's also a sense of nervousness over how long it will last.

When he shut down some big machines before the holidays for logistical reasons many workers came up to him worried that work was slowing down again.

The Martenses say a lot of the company's customers are still jittery and won't commit to long-term contracts.

Tim Martens says the company used to get large orders that would cover a company's needs for a year. But now those companies are placing smaller orders that cover just six months of time. When they run out of parts, the companies then place rush orders for large quantities.

The brothers say the tax cut package recently passed by Congress should help them in 2011, especially the tax write-off on equipment purchases.

But Michael Martens says uncertainty is stifling job growth because it's hard to forecast customer demand.

"As soon as we get a little more of a comfort zone with our customers on their commitment -- on what they will be projecting and what they will be needing from us -- it will allow us to hire a bunch more people," he says. "We are waiting to be able to hire more people. We just can't have it that we have excess capacity."