Accessibility links
GOP Takes Power In House Under Tea Party Scrutiny As Republicans assume control of the U.S. House, newly minted House Speaker John Boehner and his fellow leaders face the challenge of keeping happy the Tea Party activists who helped propel them to power last November -- and who warn that leaders must "walk the walk." 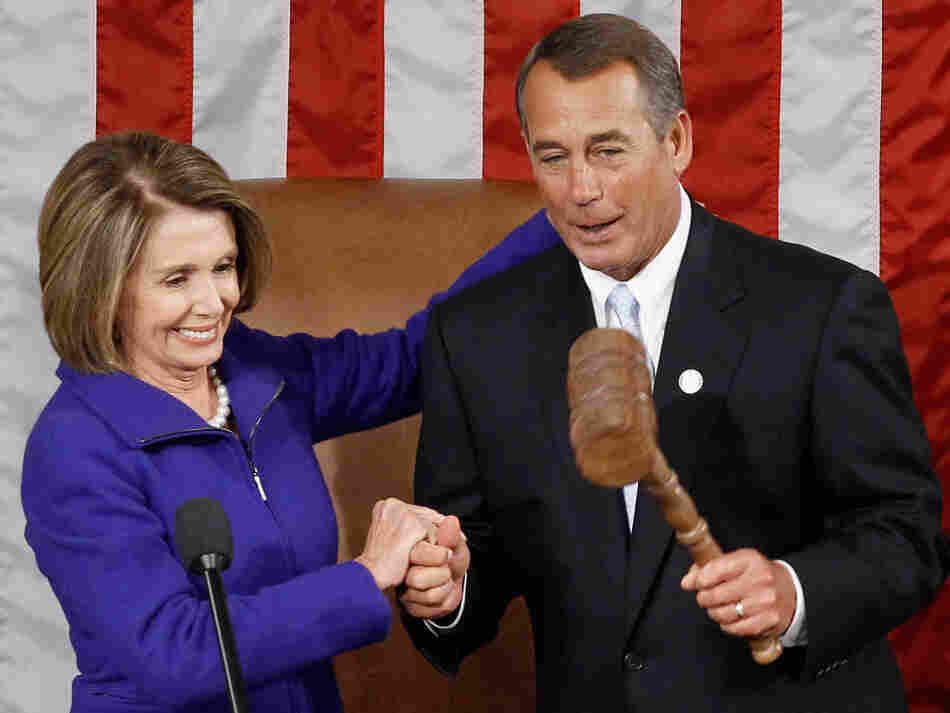 As Republicans assumed control of the U.S. House Wednesday, they face a raft of challenges, as newly minted House Speaker John Boehner noted in his opening remarks to Congress.

"Nearly 1 in 10 of our neighbors are looking for work," Boehner said. "Health care costs are still rising for families and small businesses. Our spending has caught up with us, and our debt will soon eclipse the size of our entire economy.

"Hard work and tough decisions will be required of the 112th Congress," he said, adding, "The people voted to end business as usual, and today we begin carrying out their instructions."

Republicans have gotten plenty of instructions from the Tea Party activists who helped them drive Democrats from power in the House last November. And party leaders have been scrambling to salute Tea Party goals.

They've ordered a reading of the Constitution on opening day and required that all new legislation cite a constitutional provision permitting the proposed action. They've pledged to cut 2.6 percent of the House operations budget and teed up a largely symbolic vote on repealing the 2010 health care law next week.

The Tea Party Agenda In The House

Cite The Constitution: New procedural rules proposed by House Speaker John Boehner acknowledge Tea Party demands. Under the proposed changes, House members who introduce new legislation would also have to cite which part of the Constitution gives them the power to enact it.

Push Back On The Debt Ceiling: Congress soon will have to vote on whether to raise the nation's debt ceiling beyond the current cap of $14.3 trillion. Tea Party favorite Rep. Michele Bachmann (R-MN) is gathering signatures on a petition to oppose raising the nation's ability to borrow money. Meanwhile, freshman Tea Party darling Rep. Allen West said that he would vote to raise the debt ceiling — if Congress agrees to curb its spending.

Repeal The Health Care Law: This is tops on the agenda, and the new GOP House leadership already has set a date to vote on repeal: Jan. 12. But even if repeal passes as expected in the House, it's unlikely to fly in the Senate, which Democrats still control. And President Obama would veto repeal legislation. House Majority Leader Eric Cantor (R-VA) says Republicans will attempt to "delay and defund" the bill, but that won't be easy, either — unless the GOP wants to shut down the entire federal government. (Read More)

Slash The Federal Budget: Easier said than done. Tea Party activists have been vocal in calls for smaller government, yet largely silent when it comes to details about just what they would cut. Freshman Republican lawmakers have said that nothing is off the table — including Social Security, Medicare and Medicaid.

While that's all fine and good, say Tea Party adherents across the county, window dressing does not equal what they almost uniformly refer to as "walking the walk": taking radical steps to stem government spending and cut the nation's historically high debt.

And that means starting with a "just say no" stance on increasing the debt limit -- the maximum amount the government can borrow to keep running. It's a position that the Obama administration has characterized as potentially catastrophic, and it could lead to a government shutdown.

No matter, says Amy Kremer of the Tea Party Express.

"No one ever said it was going to be easy, but they have to figure out how to do it," says Kremer, who issued this warning: "It's not too early to start making our 2012 target list."

Reckoning With The Force

Before last year's party primaries, a Tea Party threat may have been sloughed off as so much bombast. But with more than 40 Tea Party-backed House members and five senators taking the oath of office Wednesday, ignoring the movement is not an option for Republicans -- even though the movement's durability may be challenged by a strengthening economy and an off-election year.

A recent Bloomberg poll found that 57 percent of Americans expect Tea Party activists to "start compromising to get things done," while 32 percent expect them to remain "true to their principles," says the organization's pollster, J. Ann Selzer.

"I expect questions like raising the debt ceiling to offer the most insight into how the famous Republican discipline among its ranks holds or breaks," Selzer says.

Indeed, the debt ceiling debate is shaping up to be the first real test of how new Republican leaders in the House, including Boehner, and a larger GOP minority in the Senate work with, or deal with, Tea Party imperatives.

"The debt ceiling is a pivotal issue, a linchpin issue," says Peter Bordow, a Tea Party organizer in Arizona.

"There needs to be a broad understanding of the effect of this decision, but I think we are inevitably going to need to swallow a difficult pill someday," he says. "Not raising the debt ceiling may be that difficult pill."

That position has been echoed by newly elected Tea Party-backed House Republicans, including Mike Kelly, a Pennsylvania car dealer. "Raising the debt ceiling is absolutely irresponsible," he said during an appearance on CBS News.

David Schweikert of Arizona told NPR's Don Gonyea: "Not to scare people, [but] if there aren't substantive changes in both the process and what we're budgeting to, from almost a moral standpoint, I need to go out there and vote no."

And GOP Rep. Michele Bachmann of Minnesota, founder of the House Tea Party Caucus, said recently that she is "not looking to shut the government down" but is gathering signatures on a petition to prevent a debt ceiling increase.

Will Republicans seeking to appease the Tea Party risk a government shutdown, like the politically disastrous one orchestrated by Newt Gingrich, who served as speaker after the party's historic takeover of the House in 1994?

Conservative commentators and economists across the spectrum have been weighing in, and they say they hope not.

Rich Lowry, editor of the conservative National Review, urged Republicans to avoid a confrontation over raising the debt ceiling or shutting down government "lest Republicans repeat the Newt Gingrich shutdown debacle of the mid-1990s."

"The Republican political goal must be to make a government-cutting agenda seem reasonable and practicable," Lowry says, "rather than the obverse of Obama's spending recklessness."

At the business-oriented American Enterprise Institute, experts like Kevin Hassett have warned that failing to raise the debt limit would put the nation in a default situation and could turn government IOUs into toxic assets -- shaking the investment world's faith in the United States.

There are some new Tea Party-backed members of Congress who appear to be taking that into consideration. Allen West of Florida told Fox News that he would oppose raising the debt limit -- unless Congress indicates it will take on the financial problems of Social Security and Medicare. Even Bachmann couched her comments by saying she opposes raising the debt limit "at this point."

As Selzer says, the debt ceiling debate will provide a valuable window into intraparty negotiations -- and into how Boehner and Senate Minority Leader Mitch McConnell will accommodate and engage their new Tea Party-backed brethren.

When it comes to health care repeal efforts, Bordow, the Arizona activist, says he views GOP congressional action as symbolic.

"It's not a high-probability endeavor," says Bordow. "The only real shot they have is defunding certain portions of it -- the better path will be through the judicial system."

Boehner, however, has put repeal at the center of his agenda. Democrats have warmed to the battle, with Senate Majority Leader Harry Reid warning Boehner that repeal would affect "popular consumer protections that help middle-class Americans."

And Democrats have begun to highlight family-friendly aspects of the legislation, including allowing parents to carry adult children on family health insurance policies.

Tea Party activists have said that nothing should be off the table when it comes to cutting government spending -- including entitlement programs like Social Security, Medicare and Medicaid.

But like many Tea Party activists, including those coming to Congress, Kremer is less than specific when asked her suggestions for cuts: "I'm not an economist; I'm not an accountant; I'm not an expert on the economy," she says. "But to rein in spending, you have to make cuts and everything needs to be on the table."

Bordow says he would like to see the retirement age raised to 68 to help shore up Social Security and wants Americans to pay for visits to doctors' offices, with insurance covering only catastrophic health issues.

"Patients need to have their own skin in the game," he says, employing a phrase commonly used by Tea Party activists.

But Tea Party-backed newcomers in Congress now also have skin in the game, and some, like Republican Adam Kinzinger, whom Kremer points to as a Tea Party star, will have to answer to the folks back home.

"Congresswoman Halvorson did everything that she said she would during her campaign two years ago, and yet the district still tossed her," says Steve Stout of The Times newspaper in Ottawa, Ill.

"Mr. Kinzinger is a product of a growing frustration in the Midwest with the direction of the country," Stout says. But, he adds, "the Tea Party adopted Adam Kinzinger more than he adopted them. And the Tea Party here in LaSalle County is far removed from some other parts of the movement -- they're conservative here, not radical."

"Adam has a big job ahead of him," Stout says.

It's a situation that Boehner no doubt can appreciate.