Accessibility links
Closing The Achievement Gap With Baby Talk A child growing up in a poor home hears fewer words per hour on average than a child in a higher-income household, research has shown. So around the country, programs are trying to reduce the achievement gap by getting parents to talk more to their kids. 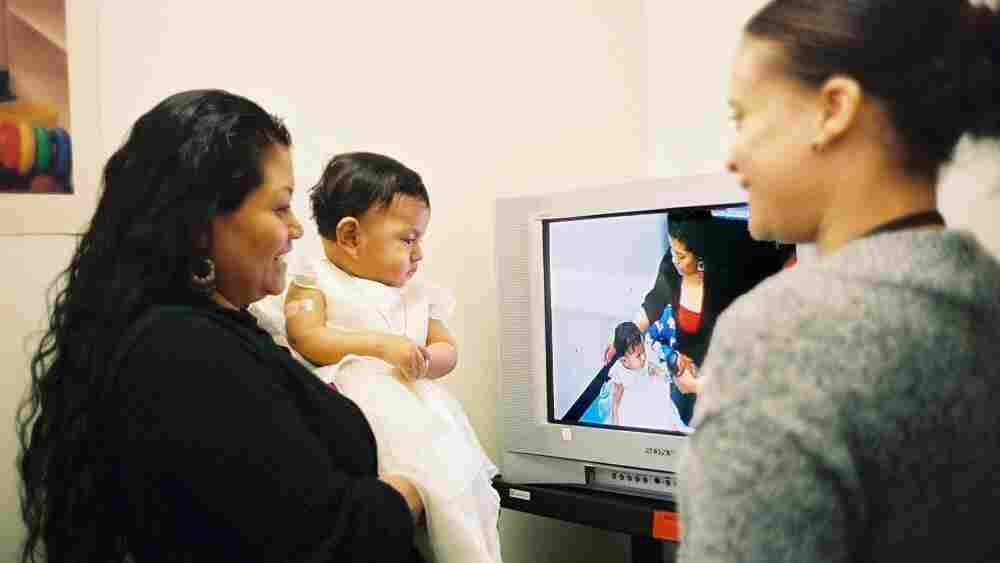 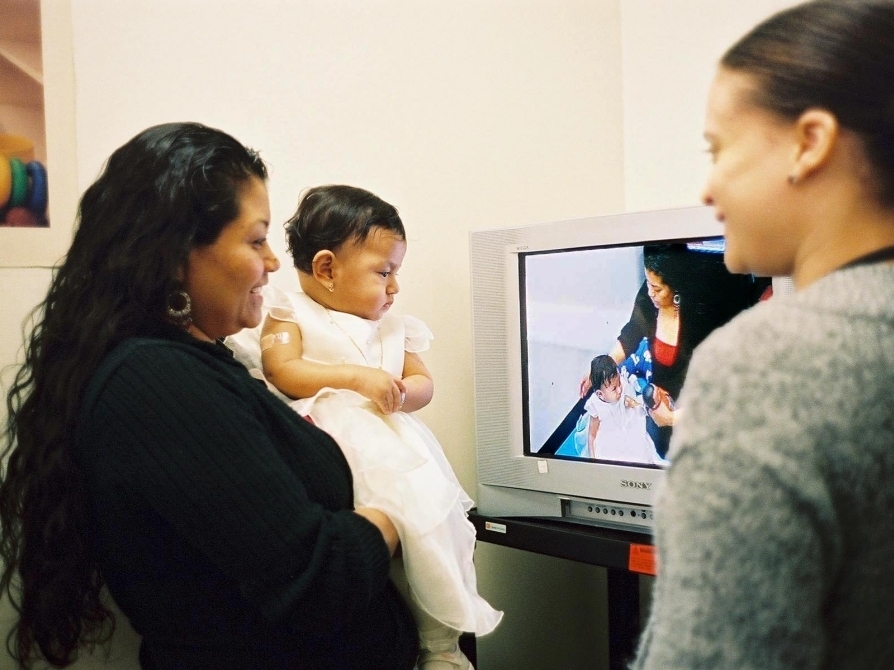 A mother watches a video taken of herself playing with her daughter for Bellevue Hospital's Video Interaction Project. Former hospital employee Brenda Woodford reviews the footage, offering positive feedback and areas for improvement.

Courtesy of Children of Bellevue Archives

In the mid-1960s, Betty Hart was a graduate student in child development working at a preschool in Kansas City, Kan. The preschool was for poor kids -- really poor kids. Many came from troubled housing projects nearby.

But Hart was determined not to see their limitations, only their potential: Hart's job was to teach these underprivileged kids how to speak like the children of her professors at the University of Kansas.

For years, she and university professor Todd Risley worked tirelessly toward this goal, doing everything they could think of to expand the vocabularies of these 4-year-olds. The idea was that if the kids could speak with the fluency of their wealthier peers across town, they might go on to similar academic achievements.

But success was elusive. "We tried everything," Hart says. "Everything we could. ... We couldn't do it."

The problem, they realized, was that they weren't getting to the kids early enough. Which led to this question: If age 4 was too late, when was early enough?

'Horrified' By The Differences

To find out, Hart and Risley embarked on an ambitious research project. They decided they would follow 40 families -- rich, poor and in between -- for the first three years of their children's lives. Literally, they would record and count the words that were said to these children.

"We really wanted to know everything that was happening to the kids," Hart says. "Who talked to the child, how long, how often, how many different words were said and how many total words were said. How many past-tense verbs and in what circumstances. You know, what people actually do all day long."

And so, starting in 1983 every month for three years, trained observers with recorders were sent to the homes of the families who had agreed to participate. There, they cataloged every utterance, endless hours of seemingly inconsequential babble.

Hart says it took close to 10 years to transcribe these tapes so they could be fed into a computer for analysis. But the results were worth it. Hart and Risley discovered many fascinating things about the differences between the way rich and poor families on average speak to their children.

But in the end, the finding that most struck people, Hart says, was not about the quality of the speech -- how often rich versus poor parents asked questions or positively affirmed their children -- but about the quantity.

According to their research, the average child in a welfare home heard about 600 words an hour while a child in a professional home heard 2,100.

"Children in professional families are talked to three times as much as the average child in a welfare family," Hart says.

And that adds up. Hart and Risley estimated that by the age of 4, children of professional parents had heard on average 48 million words addressed to them while children in poor welfare families had heard only 13 million.

It was no wonder that the underprivileged children they saw at their preschool could not catch up and often lagged behind once they went to school. They simply weren't getting the experience with language provided to their peers.

And personally, Hart says, seeing those numbers staring back at her on the page made her more than demoralized. "Horrified might be a better word," she says. "Horrified when you see that the differences are so great, and you think of trying to make up those differences. I mean, the image that you have is of running after a train. You just look at it and say, you know, 'it's hopeless.'"

But is it hopeless? 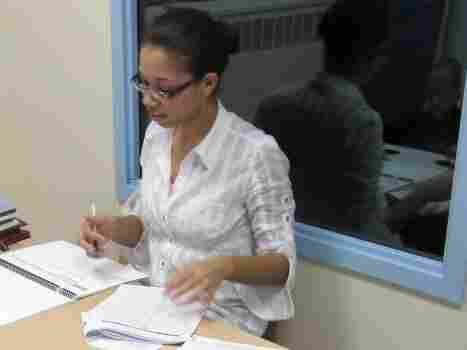 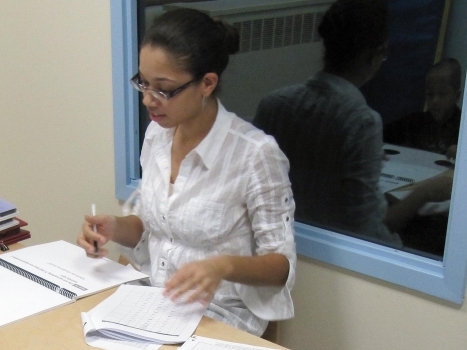 Courtesy of Children of Bellevue Archives

Hart and Risley's work was published in 1995, and since then, people in child development have seized on this idea that, to reduce the educational achievement gap between rich and poor kids, we must find a way to teach poor parents how to talk to their babies like rich parents.

One of those programs was designed by a man named Alan Mendelsohn, an associate professor of pediatrics at New York University School of Medicine.

This month in the journal the Archives of Pediatrics and Adolescent Medicine, he published a study that, he says, proves his program has been successful.

The program gives poor mothers coaching sessions with specialists every time they go to their pediatrician. In all 15 of these 45-minute sessions, the parents are videotaped playing with their babies and then advised on how to improve.

Last week, Mendelsohn brought some of these videos into an NPR studio. The first was a video taken with a mother and her baby early on in the program. On the screen, a mother and her 2-month-old were given a mirror to play with. The mother patiently held the mirror to the child, but didn't say much.

"The mother is holding the mirror up to the child, but is not really paying that much attention to the child," Mendelsohn says. "She's not talking to the child. She's not looking to see when the child is interested."

And so, after making a video like this, the child development specialist will show it to the mother herself and suggest ways that she might behave differently: Use the mirror to talk to the baby about reflections, or the color of eyes, use the mirror to engage the baby.

It is these micro-behaviors that add up to macro-differences, Mendelsohn says. To all the millions of words Betty Hart's children were missing, he points to the study's results.

"Mothers had roughly a doubling in the amount of certain kinds of labeling activities," Mendelsohn says. "And a 50 percent increase in the degree to which they reported that they talked about the events in the child's life ... and what was going on in the surroundings of the child."

But Russ Whitehurst, a researcher at the Brookings Institution who studies these issues, warns that, though laudable, teaching a low-income mother to talk to her baby as she walks through a grocery store will not by itself transform the educational achievement gap.

"If that's not followed with good stimulation in school with continued positive parent interactions, if that experience is not built on, it's not likely to have an enduring effect," Whitehurst says.