Accessibility links
Big Babies Helped Shape Early Human Societies Scientists say human babies weigh proportionally more at birth than the babies of any other primate species. Now an anthropologist has shown that the big babies of our earliest human ancestors may have helped form the first human communities. 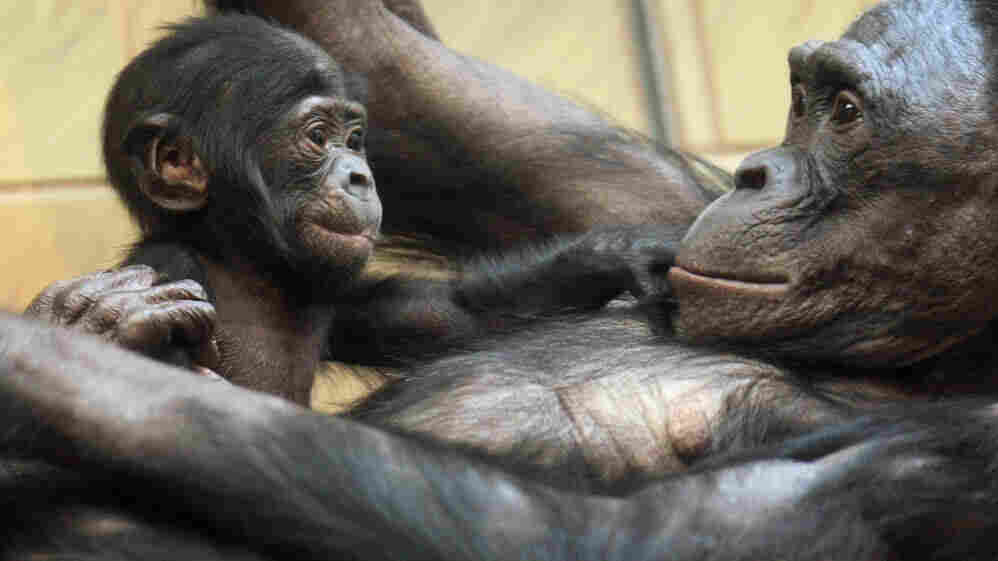 A three-month-old baby bonobo plays with its mother at a zoo in Frankfurt in 2008. A newborn ape typically weighs about 3 percent of what its mother weighs, while human babies weigh about 6 percent of their mothers' weight. Thomas Lohnes/AFP/Getty Images hide caption

Newborn babies may be a bundle of joy, but they are a heavy bundle of joy. Scientists say human babies weigh proportionally more at birth than the babies of any other primate species.

Now an anthropologist in Boston has shown that our earliest human ancestors probably had big babies, too -- something that may have influenced the development of modern human societies.

The whole expression that it takes a village is in part rooted in the fact that we have really big infants that are pretty helpless.

"Humans are strange, in all sorts of ways," says Jeremy DeSilva, an anthropologist at Boston University. We walk upright on two legs and our newborns are helpless.

A newborn ape typically weighs about 3 percent of what its mother weighs. For humans, that jumps to 6 percent. DeSilva wondered if this were true for a species like Australopithecus that came millions of years before modern humans.

But there's a fundamental difficulty answering that question: "We don't have fossilized remains of newborns," he says. 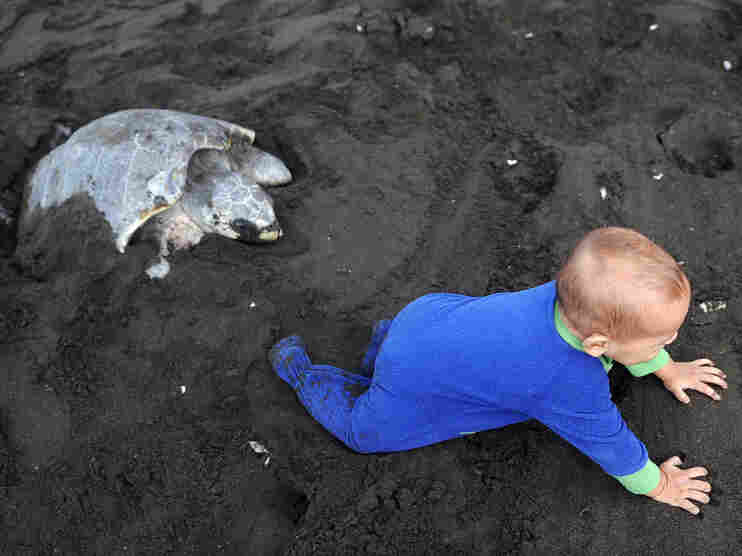 A human baby typically weighs about 6 percent of what its mother weighs. This baby, seen on a beach in Costa Rica, crawls next to an olive ridley sea turtle. Yuri Cortez/AFP/Getty Images hide caption

DeSilva came up with a clever way around that problem. It's a two-step process: First, you use adult skulls to estimate the newborn's skull size. That can be done very accurately for all primates, and DeSilva was able to analyze a dozen Australopithecus skulls.

"So once you have the size of the head, there is what researchers have called 'the 12 percent rule,'" he says. The 12 percent rule says that the brain represents 12 percent of the total body weight. "It's not exactly 12 percent; in fact in the apes it tends to be more like 10 percent."

Even with that margin of error, DeSilva says, it was clear that the birth weight of Australopithecus infants was much closer to the 6 percent of modern humans than the 3 percent of apes. He's published these results in the journal, PNAS.

"The whole expression that it takes a village is in part rooted in the fact that we have really big infants that are pretty helpless," he says. "If we wanted to get anything done, we have to hand them off."

So stable communities developed where some took care of babies while others hunted or did the taxes.

Down From The Trees

Life was changing in other ways for Australopithecus. Two and a half million years ago, they began swapping a life in trees for one on solid ground.

"One of the things I think that goes along with the switch to terrestriality is a switch to a more substantive infant that has a higher chance of survival," says Owen Lovejoy, an anthropologist at Kent State University in Ohio.

If the trend to proportionally larger babies was nearly complete 2.5 million years ago when the Australopithecus showed up, when did it begin? Anthropologist Robert Martin of the Field Museum in Chicago thinks the answer is an even older human relative called Sahelanthropus.

Martin says there's only one Sahelanthropus skull discovered so far, so that conclusion is preliminary. But it appears that big babies are something humans and our ancestors have been dealing with for a long time.