Accessibility links
U.S., China Defense Chiefs Mend Frayed Military Ties Military contacts are fewer and less substantive than U.S.-Chinese interaction in the economic, political and diplomatic arenas, and both nations want to put a better face on the military relationship ahead of a high-stakes visit to Washington by Chinese President Hu Jintao next week. 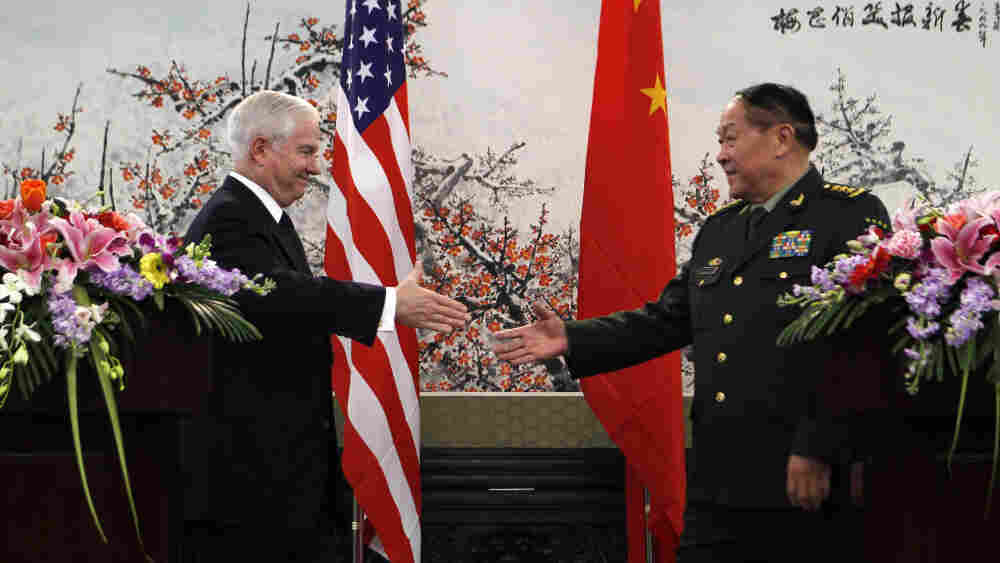 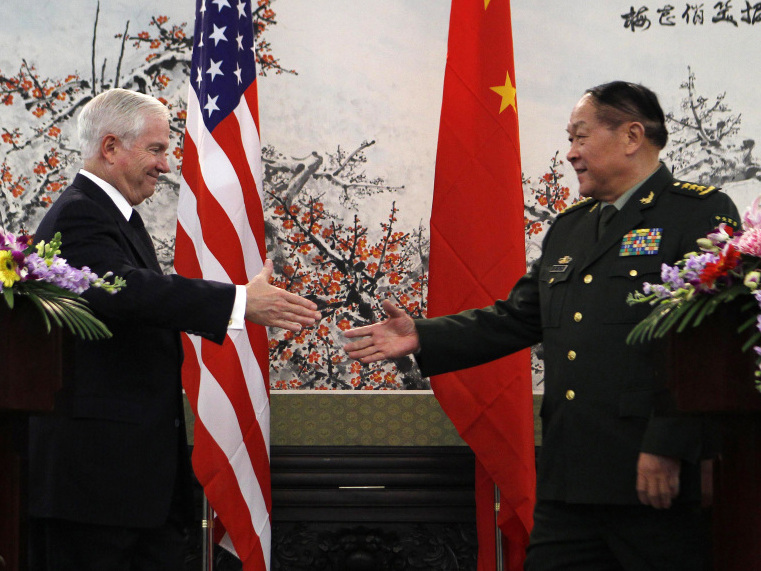 The U.S. and Chinese defense chiefs took a step Monday toward mending frayed relations between their powerful militaries, though China warned that ties could be cut again if Washington does not heed Beijing's wishes.

Military contacts are fewer and less substantive than U.S.-Chinese interaction in the economic, political and diplomatic arenas, and both nations wanted to put a better face on the military relationship ahead of a high-stakes visit to Washington by Chinese President Hu Jintao next week.

The agreement stops short of the robust cooperation sought by Washington, and China pointedly refused to promise that friction over U.S. arms sales to Taiwan might not interfere.

U.S. Defense Secretary Robert Gates and Chinese Defense Minister Liang Guanglie agreed after a morning of talks Monday to broaden some of their fragile military contacts and to study ways that the two nations might build a more formal structure for future talks. They set up a working group to look at establishing the larger and more enduring framework Gates wants.

Gates said the two nations agreed that military ties should be "solid, consistent and not subject to shifting political winds," and he said he is sure that China's People's Liberation Army is behind the idea "as much as I am."

The sometimes hidebound PLA has resisted more regular contact out of apprehension or embarrassment, and Gates has said before that China's political leadership was quicker to see the value in better military ties with the United States.

The agreement marks an end to a rocky year in which Beijing cut off defense ties with the United States over arms sales to Taiwan, the democratic island that China claims. "On that, China's position has been clear and consistent," Liang said. "We are against it."

The arms sales "seriously damaged China's core interests, and we do not want to see that happen again," Liang continued. "We hope that U.S. arms sales will not again and further disrupt" military ties or the overall relationship.

Liang, an army general, repeatedly warned that the United States should consider China's perspective. He also stressed -- following U.S. concerns over Beijing's new weaponry -- that China's military development doesn't threaten the world. Just days ago, China's prototype stealth fighter was revealed to be making test runs. The U.S. had originally believed it would be operational in 2020; now it has moved forward to 2018. But one former PLA major-general, Xu Guangyu, told NPR he believes the stealth fighter could be operational within five or six years.

Xu, now part of the China Arms Control and Disarmament Association, says the West must understand that China's military can't be frozen in time. "There's a kind of national discrimination against China. We're not excessive in our things. Our planes are much worse than American ones: 10 to 20 years behind. Some people need to change their imperialist way of thinking. China can't always have pigtails and bound feet and that level of backwardness be considered normal," Xu said.

Western analysts used to believe the guiding Chinese military doctrine was "hide and bide" -- after a saying by former Chinese leader Deng Xiaoping "to hide your capabilities and bide your time." Now that seems to be changing. Beijing's official military spending is less than one-fifth of the U.S. military budget. But it has invested in -- among other things -- anti-ship cruise and ballistic missiles, which can target U.S. aircraft carriers far out at sea. Australian defense analyst Ross Babbage, now at the Kokoda Foundation, says nobody else has that type of weapon.

"The term we tend to use in the West is anti-access area denial. It does summarize pretty clearly what the core of the Chinese strategy appears to be -- that is, to prevent U.S. and allied forces operating with great freedom in the Western Pacific," Babbage said. "There's a real risk here the Western strategy is being undermined very rapidly, and there's a need to really completely rethink where we're going and how we invest."

Xu disagrees. He says China's military is still primarily defensive, though he admits China may become more vocal as it becomes more powerful.

"We call it active defense strategy. That means we want to defend the integrity of our territorial sovereignty," Xu said. "If we're invaded or attacked, we'd defend absolutely. We don't want to challenge America at all; if the U.S. wants to be the world policeman, the big boss, that's its business. We just want one thing: Don't bully us anymore."

But Gates told reporters traveling with him to Asia on Sunday that China had the potential to "put some of our capabilities at risk."

"We have to pay attention to them. We have to respond appropriately with our own programs," Gates said.

At their news conference Monday, Gates and Liang denied that their governments are entering an arms race. Liang, dressed in his military uniform, animatedly defended China's growing capabilities, calling them entirely appropriate and consistent with China's rise as an economic and political power.

While both sides try to pave the way for a successful Hu-Obama summit, economics and politics also are aggravating strains between the world's superpower and the fast-rising new power.

Chinese trade data released Monday showed exports swelling nearly 18 percent in December and more than 30 percent for all 2010, though surging imports narrowed China's overall trade surplus. The still-high surplus is likely to add to pressure on the Obama administration to penalize Beijing for trade and currency policies that some economists and U.S. lawmakers call unfair.

A defense spending authorization signed by Obama on Friday wades into the fair-trade battle. The act effectively prohibits the Defense Department from buying solar panels made in China, a leading supplier, by requiring the Pentagon to purchase panels made in the United States or from countries that have joined an international trade agreement that Beijing has not signed.

The spending measure also orders Gates to come up with a plan to ensure secure U.S. access to critical elements known as rare earths that are crucial to some weaponry and other high-technology products. China is the world's biggest supplier but has restrained exports, citing environmental degradation from mining. Critics contend that Beijing wants to drive up prices and demonstrate its control over vital commodities.

Gates' four-day trip to Beijing includes meetings with the top political and military leadership and a visit to a Chinese nuclear weapons base.

Both governments are trying to smooth over the substantial friction over trade, North Korea's and Iran's nuclear programs and China's generally more assertive diplomatic posture. The two nations also agreed to wider cooperation in such noncombat areas as counterterrorism and counterpiracy operations.

The United States has argued that a more formal arrangement would benefit both nations and help avert crises. More formal contacts and cooperation, including joint exercises and training, might also make it less likely that China would walk out on the arrangement.

During Monday's talks, the Chinese agreed to consider a proposal for a strategic security dialogue. It's a step forward, even if it falls short of any commitment to protect military ties from rupture.