Accessibility links
'What Is The What' Lost Boy Casts Sudan Vote During Sudan's civil war, Valentino Achak Deng fled to Ethiopia on foot, one of the so-called Lost Boys. Deng's life became a best-selling novel in the U.S., and he returned to his homeland to build a school. As Southern Sudan votes on independence, he says he harbors optimism about the future. 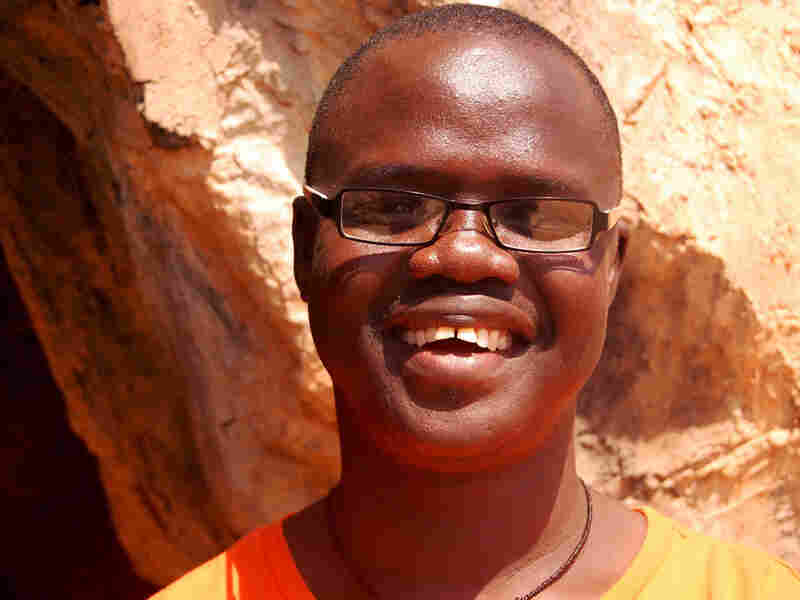 Valentino Achak Deng was separated from his family for 17 years during Sudan's brutal civil war. One of Sudan's Lost Boys, Deng now has returned to his homeland and runs a school. Frank Langfitt/NPR hide caption

During Sudan's civil war, in which some 2 million people died, Valentino Achak Deng fled to Ethiopia on foot. Separated from his family for 17 years, Deng is one of Sudan's so-called Lost Boys, children who were orphaned or separated from their families during the brutal war.

Now, voting is under way in Southern Sudan in a referendum that is expected to split Africa's largest country. Among those voting this week are the Lost Boys, including Deng, whose life became a best-selling novel in America and who has returned to his homeland to build a school.

After a peace agreement between north and south, Deng returned to Juba, the capital of Southern Sudan, in 2006. He says when he got there, the place was still a wreck.

Now, as Southern Sudan appears headed for independence, Deng is optimistic — and Juba looks a lot better. Paved roads, now lined with hotels and restaurants, arrived for the first time in 2007.

Juba is a booming city, one of incredible contrast: Barefoot women selling piles of gravel by the side of the road sit next to a Toyota dealership.

Deng grew up in a tiny village called Marial Bai. In the 1980s, northern bombers and Arab militias came.

"They bombed Marial Bai, destroyed it, killed everything, burned crops and livestock," he says.

Deng was there when the fighting came. He says he "ran away with the rest." He was 9 years old.

Deng joined thousands of Lost Boys, who spent months trekking across Sudan to refugee camps in Ethiopia. His experience is captured in What Is the What, a novel by Dave Eggers, which reads like a modern-day story of Job.

Deng eventually resettled in the U.S., where he attended college and was mentored and sponsored by ordinary Americans.

In 2007, he returned to start a high school in Marial Bai, where there was none.

The school is funded by Deng's private foundation. He says most donations come from Americans touched by his story and the plight of Southern Sudan.

Deng, now 32, has just cast his vote for independence. He says that for a Sudanese child of war, his life's journey is almost inconceivable.

"I never imagined I would be the person I am right now," he says.