Accessibility links
'Dark Was The Night' From Radio City Music Hall In a year of great music, the Dark Was the Night compilation ranks near the top. Now comes Dark Was the Night: The Concert, a truly mammoth undertaking. Members of The National curated the May 3 event to benefit AIDS research with performances by David Byrne, The Dirty Projectors, Feist, Bon Iver, Sharon Jones and My Brightest Diamond.

'Dark Was The Night' From Radio City Music Hall 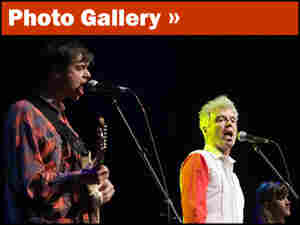 Click to see photos from 'Dark Was the Night.'
Kathryn Yu

In a year of great music, the Dark Was the Night compilation ranks near the top, with 31 songs by artists writing and performing original works, including Sufjan Stevens, Arcade Fire, Yeasayer, Cat Power, Andrew Bird and many more.

More recently, on May 3, the collection spawned a one-of-a-kind concert at Radio City Music Hall in New York City.

It was a truly mammoth undertaking. Though not all 31 songs from the record were performed, you could still hear David Byrne, The Dirty Projectors, Bon Iver, The National, Sharon Jones and the Dap Kings, My Brightest Diamond and Feist, often in unique configurations.

The lively dynamics of the night made for some wonderful pairings and odd duets: Feist and Bon Iver, David Byrne and The Dirty Projectors, David Byrne with Justin Vernon of Bon Iver, The National with My Brightest Diamond and Sharon Jones with everyone.

Dark Was the Night is a 20th-anniversary benefit collection put together by the Red Hot Organization, which has been using the power of pop culture to fight AIDS since 1989. This particular compilation was brilliantly curated by twin brothers Aaron and Bryce Dessner of The National, who also curated the concert.

There are a few bits missing here that were part of the live event. Sometimes, a live performance is best left at the venue, but what we have here are all the performances that the artists are most proud to present.