Accessibility links
Kepler Space Telescope Spots Its First Rocky Planet The planet, Kepler-10b, is 1.4 times the size of Earth and the smallest planet discovered outside our solar system. Though the planet is far too close to its star to harbor life, the finding holds promise for future planetary discoveries using the space telescope. 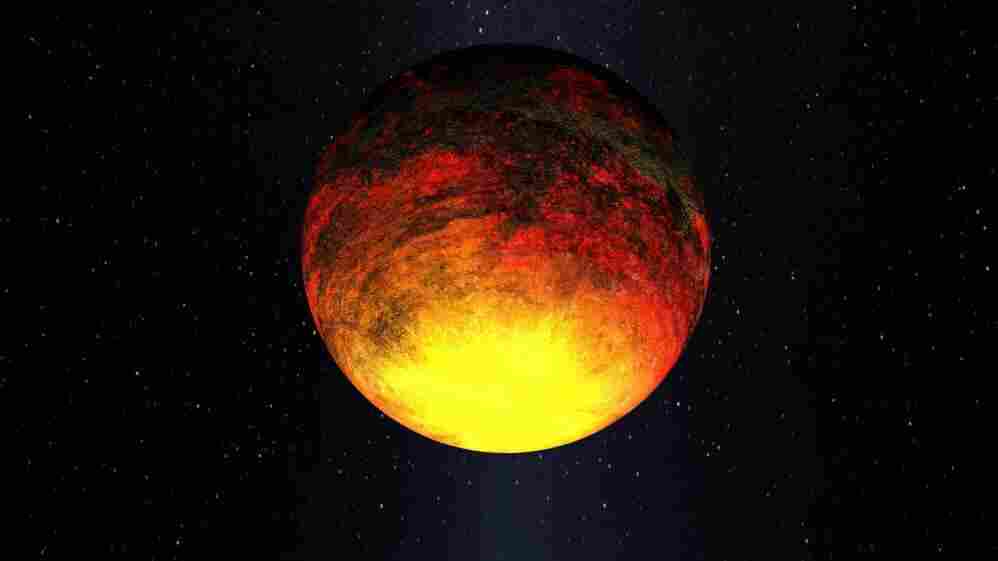 The planet Kepler-10b, seen in this artist's drawing, is about 1.4 times the size of Earth and is the smallest planet ever discovered outside of our solar system. NASA hide caption

A big, hot rock made its debut Tuesday. It's a planet orbiting a star 560 light-years away, and it is claimed to be the smallest planet discovered outside our solar system.

Video: More About The Planet

Astronomers have found hundreds of planets outside our solar system, but most are behemoths -- larger than Jupiter -- and many are made mostly of gas.

The new planet was found by NASA's Kepler space telescope, which was designed to look for much smaller, solid planets more like Earth. At a news conference Monday at the American Astronomical Society meeting in Seattle, researchers said they'd found one.

Batalha says Kepler can detect planets like this by measuring the minute decrease in light when the planet passes in front of its star. The dip in light is tiny -- Baltalha says think of it in terms of light bulbs.

"You've got 10,000 light bulbs, and you take just one away -- that's the brightness change we're trying to measure," she said.

Kepler-10b may be Earth-sized and rocky like Earth, but it's not likely to be inhabited. That's because it orbits once every 20 hours. It's also very close to the star it orbits -- its surface temperature is about 2,500 degrees -- a bit toasty for life.

"The discovery of Kepler-10b is a significant milestone in the search for planets similar to our own," said Douglas Hudgins, Kepler program scientist at NASA Headquarters in Washington, in a statement. "The exciting find showcases the kinds of discoveries made possible by the mission and the promise of many more to come."