Accessibility links
Foreign Policy: Clooney's Presence Not Helping Sudan George Clooney is in south Sudan this week to advocate against genocide as the south votes to gain independence from the north. But Joshua Keating of Foreign Policy argues that Clooney isn't helping matters. 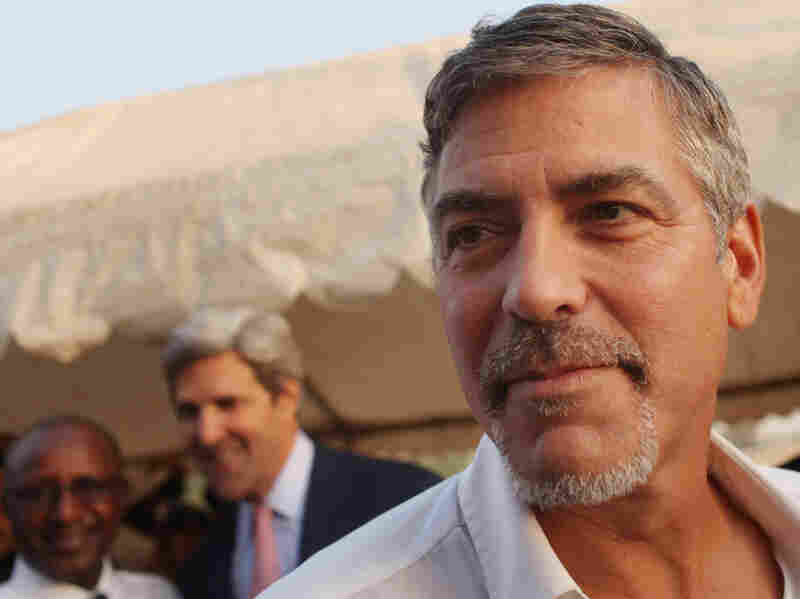 American actor George Clooney attends voting ceremonies during the first day of voting for the independence referendum in the southern Sudanese city of Juba. Clooney is in Sudan to advocate against genocide and to promote the satellite project that shows what's happening along the north-south border. Spencer Platt/Getty Images hide caption

Joshua Keating is an associate editor at Foreign Policy.

George Clooney's "anti-genocide paparazzi" seems to be dominating nearly every transmission coming out of south Sudan this week. Clooney, along with the Enough Project, Harvard researchers, and some of his wealthier Hollywood friends, have hired satellites to monitor troop movements along the north-south border, particularly the oil-rich region of Abyei. Clooney, active for years in the Save Darfur movement, has also become something of a celebrity spokesperson for the independence referendum. Naturally, the international humanitarian blogosphere's snark brigade is out in force.

Laurenist: "If you're anything like George Clooney, you lounge around on your yacht off the coast of Italy thinking up ways to save Africa."

Texas in Africa: "While John Prendergast, George Clooney, and other advocates who don't speak a word of Arabic have been raising fears about violence for months … the likelihood that a genocide or war will break out immediately seems to me to be slim to none."

Wronging Rights: "Clooney has described it as 'the best use of his celebrity.' Kinda just seems like he's trying to recruit a mercenary for Ocean's Fourteen."

Troubling as this morning's border violence is, there seems to be good reason for skepticism about the satellite project. The imagery the satellites provide isn't all that clear, showing about 8 square miles per computer-screen pixel, making it difficult to figure out just what's going on on the ground. That level of imprecision can be dangerous when trying to assign guilt or innocence in crimes against humanity. There's also the question of how much of a deterrent this type of monitoring really is. Laurenist again:

In 2007, Amnesty International and the American Association for the Advancement of Science launched "Eyes on Darfur," a satellite project that monitored developments on the ground in Darfur. As you'll recall, mere months later, Darfur was saved after millions of people updated their Facebook statuses with a link to blurry photos of sand.

But what about Clooney's presence itself? The actor's use of the paparazzi and basketball as analogies for horrific human rights violations might be grating to those who study these issues seriously, but isn't it worthwhile to bring attention to an often overlooked conflict? Here's UN Dispatch's Mark Leon Goldberg:

I know some people (cough, cough, Bill Easterly, cough, cough) have hangups about celebrity activism.  But does anyone really think that Sudan's upcoming referendum would be covered on a National Sunday morning broadcast without George Clooney's handsome face to greet viewers?

(Interestingly, Bono-basher-in-chief William Easterly doesn't appear to have weighed in yet.)

Clooney has his own words for the haters:

"I'm sick of it," he said. "If your cynicism means you stand on the sidelines and throw stones, I'm fine, I can take it. I could give a damn what you think. We're trying to save some lives. If you're cynical enough not to understand that, then get off your ass and do something. If you're angry at me, go do it yourself. Find another cause -- I don't care. We're working, and we're going forward."

This kind of "at least I'm doing something" rhetoric drives development scholars absolutely bonkers and for good reason. But for now at least, it's hard to see how Clooney's presence as a cheerleader is really hurting. Once the referendum is over however, I hope he heads back to Lake Como. In international negotiations, a certain degree of obscurity can often be just as helpful as the media spotlight. Making a new country is a messy business anywhere, and in Southern Sudan, it's going to involve some very ugly compromises. (I wonder, for instance, what Clooney thinks about the Southern Sudanese government expelling Darfuri rebels in what seemed to be a conciliatory gesture to Khartoum.)

In the difficult weeks and months ahead, Southern Sudan will certainly need international help, but it should come from people with a slightly more extensive background in the situation. Most of all, it's probably not helpful for celebrities and the media to promote a narrative of the Juba government as the "good Sudan." Even in the best-case scenario, it's bound to be shattered pretty quickly.

In any event, the Southern Sudanese themselves seem pretty nonplussed about Danny Ocean's presence in their midst: