Accessibility links
Hungarian Media Laws Embarrass European Allies Hungary's turn at the helm of the European Union is off to a rough start. Budapest has outraged pro-democracy advocates and others with a series of decisions, including the implementation of new media laws, that critics say represent a dangerous erosion of democratic principles. 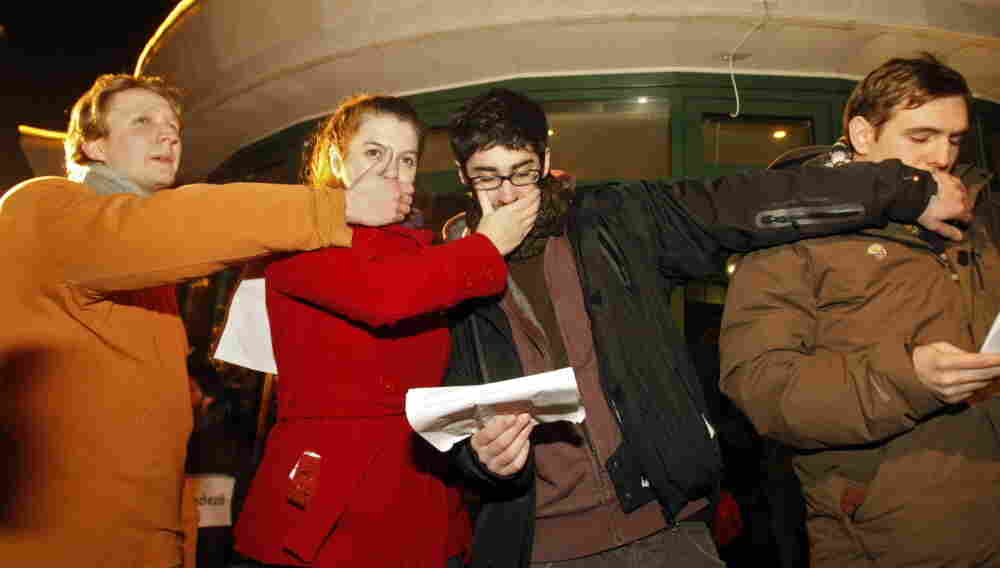 Hungarian students in downtown Budapest take part in a demonstration Dec. 20, 2010, against new laws that will give the state authority far-reaching powers over private media. Ferenc Isza/AFP/Getty Images hide caption 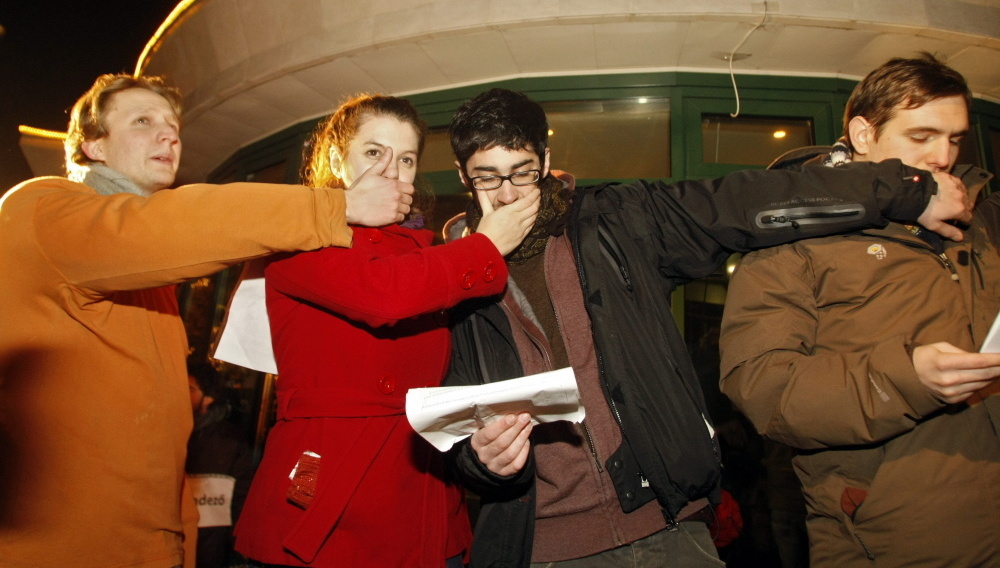 Hungarian students in downtown Budapest take part in a demonstration Dec. 20, 2010, against new laws that will give the state authority far-reaching powers over private media.

Hungary's turn at the rotating helm of the European Union presidency is off to a rough start.

The government has managed to outrage some EU member states, pro-democracy advocates and others with a series of measures critics say represent a dangerous erosion of democratic principles and a lurch toward autocratic rule.

In a snow-dusted park in central Budapest, tourists and locals alike snap photos of the beautiful neo-Gothic Parliament building as EU flags hang together with Hungary's.

It is a proud time for Hungary. Yet some Hungarians are worried that many of the very values the country is expected to uphold as an EU member and as president are now under threat.

A new package of media laws created by Prime Minister Victor Orban's conservative government allows Hungary's five-person Media Council -- all loyalists of Orban's ruling Fidesz party -- to impose big fines on all news outlets if the board deems reporting unbalanced or as violating a host of vaguely defined terms such as public morality. 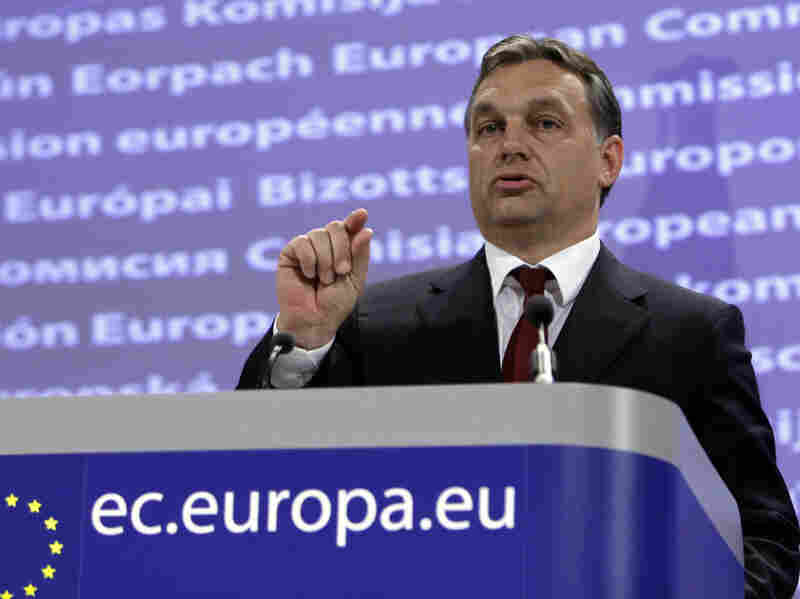 Hungarian Prime Minister Victor Orban speaks during a media conference at EU Headquarters in Brussels, Nov. 17, 2010. Hungary's democratic credentials are under scrutiny as it assumes the EU presidency, with some critics accusing its leadership of creeping authoritarianism. Virginia Mayo/AP hide caption 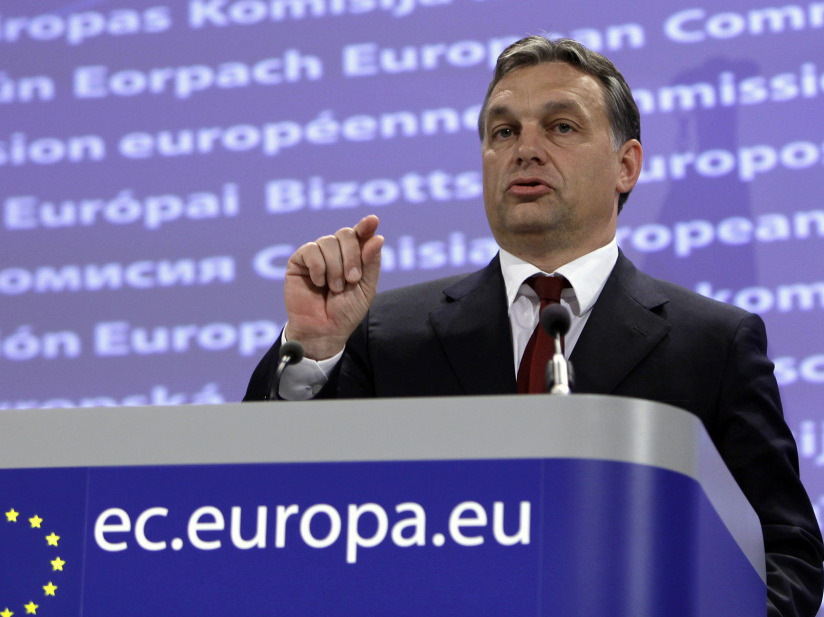 Hungarian Prime Minister Victor Orban speaks during a media conference at EU Headquarters in Brussels, Nov. 17, 2010. Hungary's democratic credentials are under scrutiny as it assumes the EU presidency, with some critics accusing its leadership of creeping authoritarianism.

"The law provides total control to the government over all the media, both public and private," says Gabor Horvath, deputy editor of the daily Nepszabadsag, the largest-circulation broadsheet in Hungary.

Newspapers can be docked the equivalent of half a million dollars per violation.

Horvath likens the laws to a bully with a baseball bat standing over the news desk.

"And he says, 'You know, I can smash your head, but I'm a good guy. I'm not going to do that.' What would you feel? All the guarantee we are having is them saying that they are nice guys. I'm not buying that," he says.

In protest, Nepszabadsag and several other papers have run blank front pages.

Meanwhile, the laws have sparked international outrage and a European Commission inquiry. The Organization of Security Cooperation in Europe called the Media Council's regulatory power "unprecedented in European democracies."

Attila Mong, one of the hosts of Hungarian Public Radio's morning news magazine, 180 Minutes, protested the new media laws last month with a minute of silence during his program, which is one of the most influential and popular news shows in the country. Mong was abruptly suspended and is now off the air pending an internal disciplinary investigation.

"This was a matter of journalistic conscience for me," Mong says. "I was talking with my editor and we were thinking we wouldn't want young reporters 15 years from now asking, 'You were there, what did you do, what didn't you do?' I think this is public service journalism when something serious is happening to maybe choose unusual, formal solutions. This was trying to draw the attentions of average Hungarians that these [media laws] are something they need to pay attention to."

Gyorgy Ocsko, the legal chief of the Media Council, insists Hungary's post-communist media need reining in. But he says the country will consider changes to the law if the EU says it's necessary.

"This 'unfettered press freedom,' it yielded some negative fruit as well," Ocsko says. 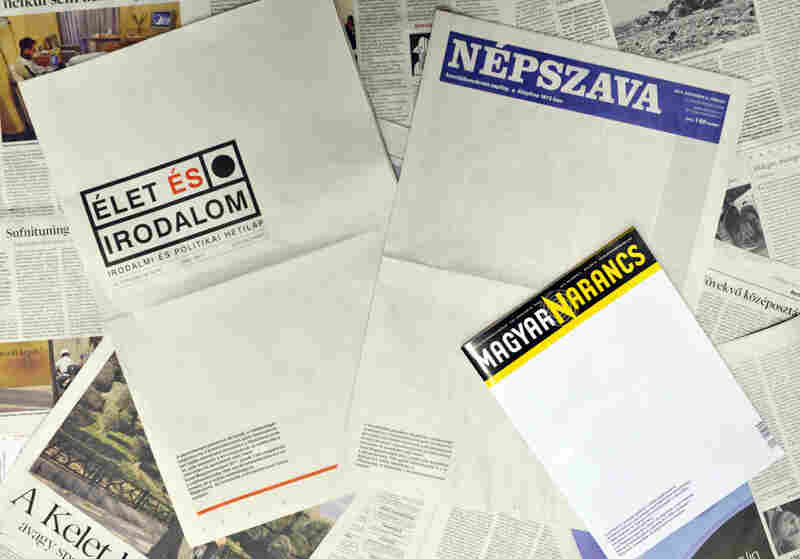 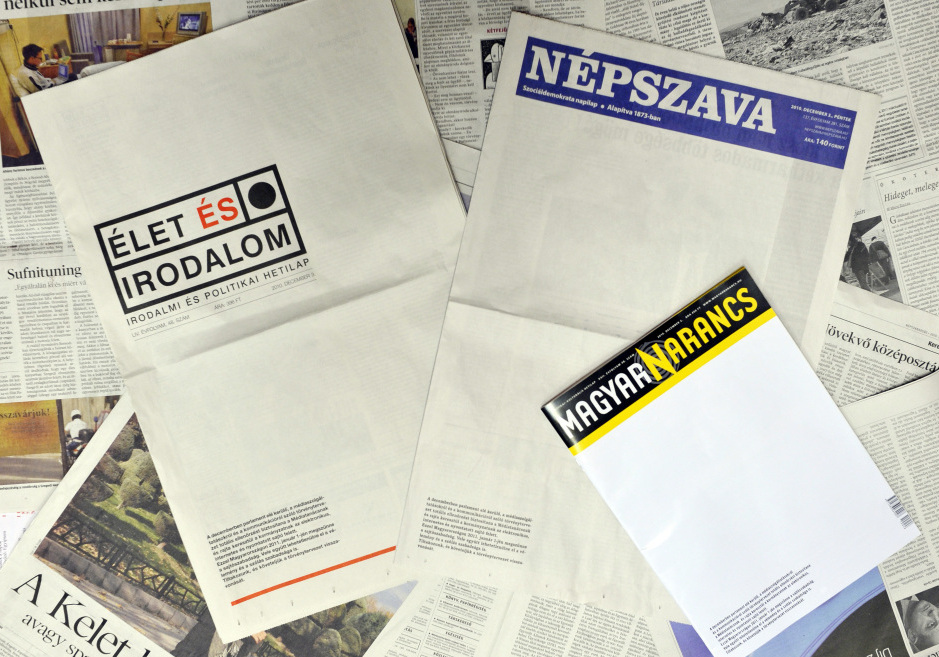 He says he hopes the new laws won't have a chilling effect on journalists in Hungary. "But if it is in violation of international and democratic standards, then it should be modified. If not, then this law will prevail," he says.

In recent days, Orban has signaled a potential retreat on this controversy, saying he would consider changes but won't be forced into it. He says he's awaiting the European Commission's word on whether Hungary's media laws comply with EU rules.

"We are monitoring its practical application and if any of the political concerns are verified ... we are ready to remedy them," Orban said at a Budapest press conference recently with visiting EU officials, including commission chief Jose Manuel Barroso.

The EU also has launched an inquiry into the legality of new taxes aimed mostly at foreign companies. All of this is happening just as Hungary takes over the EU presidency.

Former EU commissioner Laszlo Kovacs, a member of the Hungarian Parliament with the opposition Socialists, says the country holding the rotating presidency "is the one who is the face of the European Union for six months. And it's not a very beautiful face today."

Kovacs says that with its two-thirds majority in Parliament, Orban's Fidesz party also has threatened the independence of the judiciary and rammed through changes to the Constitution. When the Constitutional Court opposed Orban's plan to nationalize some pension funds, Orban and his party quickly eliminated the high court's power to rule on financial matters.

Last weekend, a group of prominent former anti-communist dissidents from Hungary and elsewhere in Europe expressed dismay at Orban's consolidation of power and appealed to the EU for help.

In the open letter the dissidents, including former Czech President Vaclav Havel, warned that Hungary's government, though elected democratically, is misusing its legislative majority to dismantle democracy's checks and balances and "to remove constitutional constraints, and to subordinate to the will of the ruling party all branches of power, independent institutions, and the media."