Accessibility links
Coen Bros. On Wet Horses, Kid Stars: It's A Wild West Joel and Ethan Coen's latest film is an adaptation of the Charles Portis western novel True Grit. The filmmakers and writers discuss the making of the film and the difficulties of working with both child actors and horses. 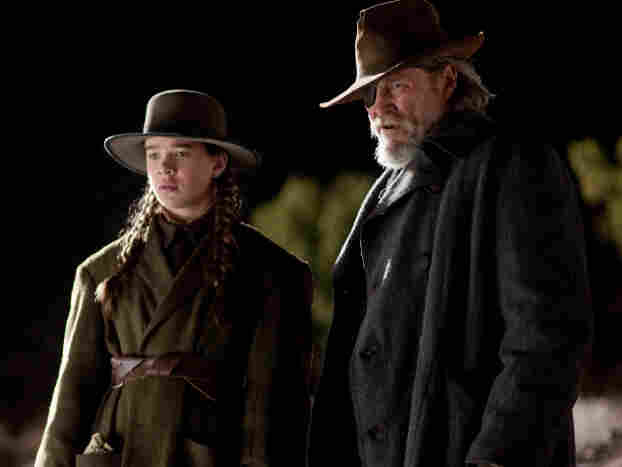 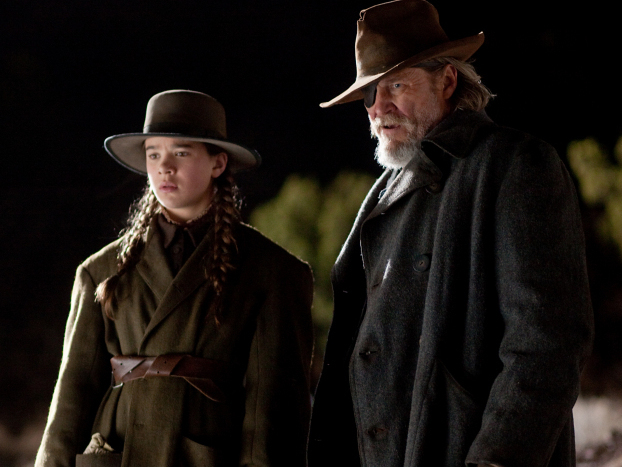 Hailee Steinfeld plays 14-year-old Mattie, the stubborn and determined teenager who sets out to avenge her father's death in the Coen brothers' adaptation of Charles Portis' novel True Grit.

But finding an actress to play Mattie was a challenge, Ethan Coen says. He tells Fresh Air's Terry Gross that he asked Rachel Tenner, the casting director from A Serious Man, to sift through thousands of audition tapes, passing on the promising ones to both Coen brothers.

"We saw only a tiny percentage of those auditions and submissions," says Joel Coen, whose filmography, all produced in tandem with his brother, includes Blood Simple, The Big Lebowski, O Brother Where Art Thou, Fargo, No Country for Old Men, Burn After Reading and A Simple Man.

"To a large extent, 99.99 percent of the girls who auditioned for this role just washed out at the level of the vocal qualities, and not being able to get their mouths around the language."

'I Will See The Thing Done'

From 'True Grit' - 'You Missed Your Shot'

'You Missed Your Shot'

Steinfeld, whose debut film performance has been hailed by critics across the country, was cast as Mattie only weeks before the film shoot started.

The Coens were "in despair some time before we met Hailee," Ethan Coen says, "because it wasn't a given that we were going to find the person who could do the movie. It's a great part for a 14-year-old, but it could have turned out to have been beyond all real-life 14-year-olds. But we just figured we'd find somebody, and it would be cheating to tell ourselves that we could abandon the movie if we didn't find the right person, so we just pushed on — and then, mercifully, did meet Hailee."

True Grit, which begins in Arkansas in the 1870s, follows Mattie as she looks for a federal marshal willing to track down her father's murderer — and to take her along on the hunt. The marshal she finds is the one-eyed, drunk-but-fearless Rooster Cogburn (Jeff Bridges, as the character made famous by John Wayne).

Joining the two on the journey is a Texas Ranger played by Matt Damon. Mattie, who at first thinks the expedition will be an adventure for the three of them, will witness brutality that transforms her as they get further down the trail.

In addition to casting actors, the Coen brothers were faced with the difficulty of casting horses in True Grit, a task they initially approached with great trepidation. (For most of the movie, the actors are on horseback.)

Equine actors "are difficult to deal with for a number of reasons," says Joel Coen. "But we were lucky to work with probably the best horse wranglers in the business. And they do extraordinary things with the horses. The horses will often hit their marks in ways you sometimes wish the actors were capable of doing. But we were doing a lot of very complicated things with the horses, and there are restrictions on what you can do with animals — and horses in particular — which are there for very good reasons." 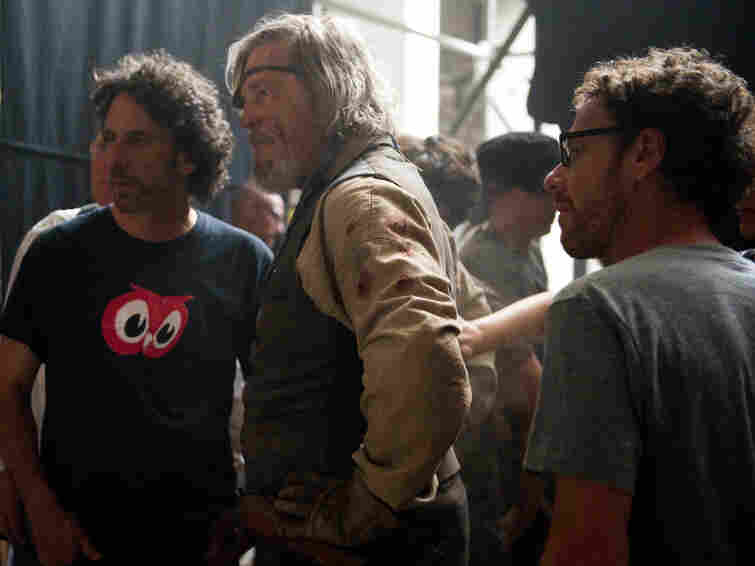 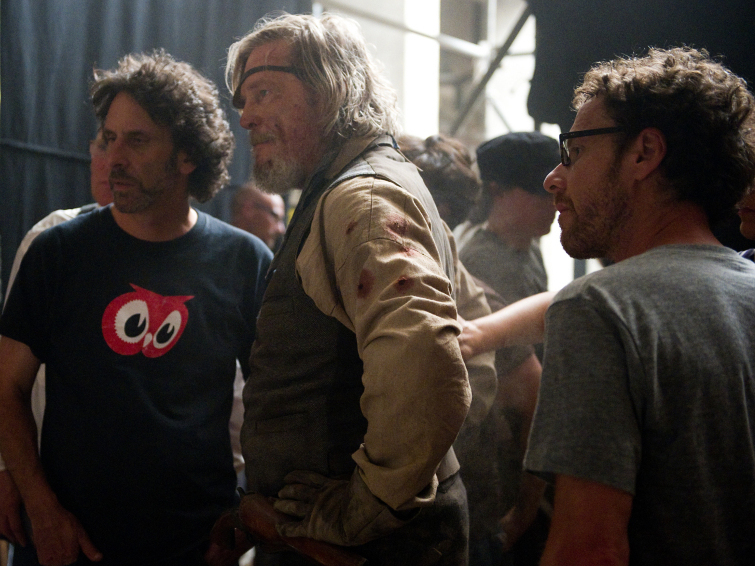 For instance, if you wanted a horse to fall down 20 years ago, Ethan says, you could have simply tripped the horse.

"You're not allowed to do that, with good reason," he says. "But it makes it very difficult. The horses have to be trained, and they have to want to fall down."

There are also rules in place about how close moving camera equipment can be to horses, who is allowed to touch a horse, and what the water temperature must be for aquatic scenes involving horses.

"It seems odd, because we were throwing actors in there with the horses, and the actors weren't complaining," Ethan says.

"There's frequently things you can do with actors that you can't do with animals," jokes Joel. "That's actually quite common. The horses are protected but the union isn't saying anything about putting the 13-year-old in freezing water."

On the distinct dialect used in the film

Joel Coen: "Most of the dialogue is taken from the book [by Charles Portis]. And in places where it wasn't, where we were kind of aping the language of the book because the scenes didn't derive from the original book, it wasn't a foreign language. It is a strikingly different usage of the English language, but it was more a question of aping the tone."

Ethan Coen: "It was a frequent occurrence on the set that an actor would use a contraction, and we would ask them not to."

Joel Coen: "A special whistle that we blew. Not really. But the actors really welcomed that. Part of what's interesting about the parts is the language — and they also wanted to be faithful to that."

On not sexualizing Hailee Steinfeld's character

From The Coens, A Grittier Sort Of Truth Out West

Ethan Coen: "That's a whole interesting issue. ... We were aware of the fact that that part was played [in the John Wayne movie version] by Kim Darby, who was in her early 20s. ... But it's so clear from the novel that Charles Portis made the protagonist on the brink of puberty, of sexual awareness — just on that weird edge between being a child and being an adolescent or sexual creature. It's part of what's interesting about the dynamic between her and the two men in the story. And you don't want to sexualize it, but there's this sort of sexual element between them and her age that's part of the story, and part of what we wanted to be there. It would have been unavoidably more sexual or weird had the character been older — or, in certain ways, younger."

On rules dealing with child actors

Ethan Coen: "In terms of child labor, the one that was difficult to deal with — just because you're making a movie and trying to make the day's work done — [was] related to her hours on the set, which are restricted. And you're not allowed to shoot with a minor past midnight, so when you're doing a night scene, it's especially onerous because it doesn't get dark until 8 or 8:30, and the main character leaves at midnight. That presents a working problem. But, you know, we knew what we were getting into, shooting a movie with horses and a 13-year-old."

Joel Coen: "It makes scheduling the movie enormously more complicated. It does force you, unfortunately, in certain situations to do the coverage of certain scenes — the coverage of Jeff or Matt, for instance, sometimes had to be done with another actor who was standing in for Hailee at that point — because you still have to shoot the day."

Ethan Coen: "There's a rule that in the movie, if you're looking at a shot of Jeff or Matt over the shoulder of Mattie, the character of Mattie is usually not Hailee but an adult double in her wardrobe."