Accessibility links
Airports Consider Using Private Security Screeners In 17 airports across the United States, security screeners work for private contractors, not the TSA -- although they work under the agency's supervision and guidelines. Now, the new chairman of the House Transportation Committee is urging other airports to make the switch to improve performance. 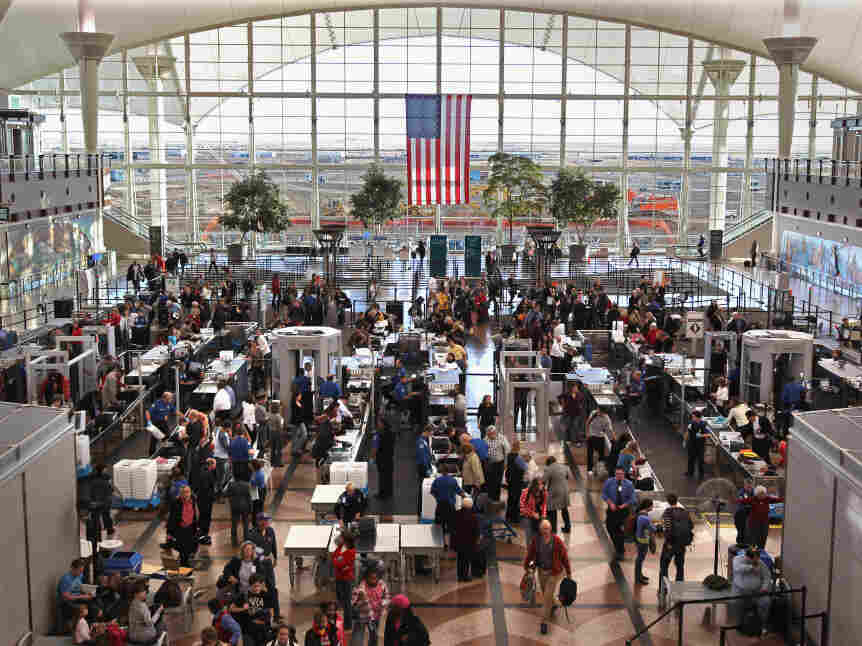 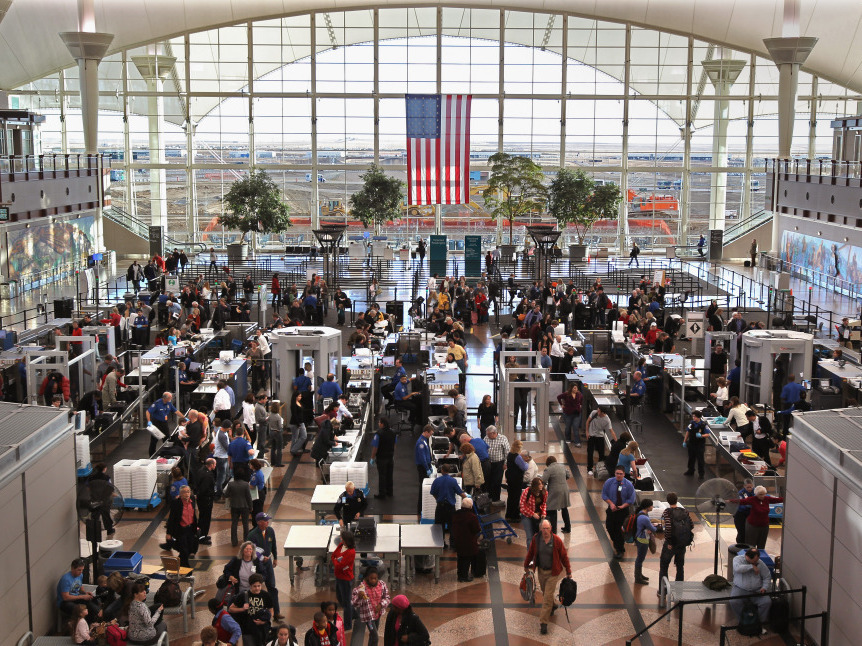 Passengers move through a main security checkpoint at the Denver International Airport on Nov. 22. Some airports are considering replacing government security screeners with private companies.

It's a step the new chairman of the House Transportation Committee has been urging the nation's airports to take. But it's not clear travelers would notice much of a difference.

The Kansas City International Airport is one of 17 in the United States where the screeners work for private contractors, not the Transportation Security Administration.

The airport's director, Mark VanLoh, is expecting to be busy this winter: "I will be giving a lot of tours in the next few months from airports all over the country coming to Kansas City to check us out."

"In my opinion, these contract employees -- they're not federal employees; they're not guaranteed a job for life," he says. "If they don't meet the performance goals or maybe they're consistently rude, or maybe they miss objects that go through the machine, they are terminated. I can't remember how easy that would be to do with a federal employee. I don't think it is."

Kansas City was one of the first airports after the Sept. 11 attacks to use screeners hired by private contractors. The Aviation and Transportation Security Act of 2001, which created the TSA, also gave airports the option of using private security screeners. Those that have range in size from San Francisco's international airport to the regional facility in Tupelo, Miss.

With private screeners, the security line operates the same way it does at airports where TSA handles the screening: Travelers remove their shoes; take out their laptops. They go through the same full-body scanners and are subject to the same pat-downs. In fact, the private security firms are actually hired by the TSA, and the screeners work under TSA supervision and guidelines.

But Republican Rep. John Mica of Florida, the new chairman of the House Transportation Committee, maintains that the private contract screeners are better. Last November, before he even took the reins at the committee, he sent letters to some 200 airports, urging them to consider converting from TSA screeners to a private screening program.

Mica's office did not respond to requests for an interview. But it in a clip posted on his website, Mica cited a Government Accountability Office report about private screeners.

"The private screening under federal supervision works and performs statistically significantly better, so our main purpose here is in getting better screening and better performance, not to mention that we can get better cost for the taxpayers," he said.

Mica says the TSA has become, in his words, an unwieldy bureaucracy with 67,000 employees -- something, he said, that was never envisioned.

The TSA will say only that all screeners are subject to the same training and performance requirements.

It's not clear that hiring private screeners saves the government any money. And aviation analyst Robert Mann, a former airline executive, is dubious about returning to what he says was a fragmented system before the Sept. 11 attacks.

"It's likely that a private contractor would manage front-line employees to a different customer service standard than would a federal workforce, but if they're required to use the same technology, if they're required to meet the same screening standards and techniques, then the likelihood is it's a nicer wrapper on the same process," he says.

Mann says security should be focused on stopping terrorists rather than discovering objects, and that the debate over whether screeners get their paychecks directly from the TSA or from a private contractor matters little in the end.