Accessibility links
FBI Launches 'Bureau Special' To Probe Shooting Agents from across the country are being called in to help gather evidence and construct a timeline of alleged gunman Jared Loughner's movements in the days and weeks before the attack. Investigators tell NPR that they are trying to understand what motivated Loughner to lash out. 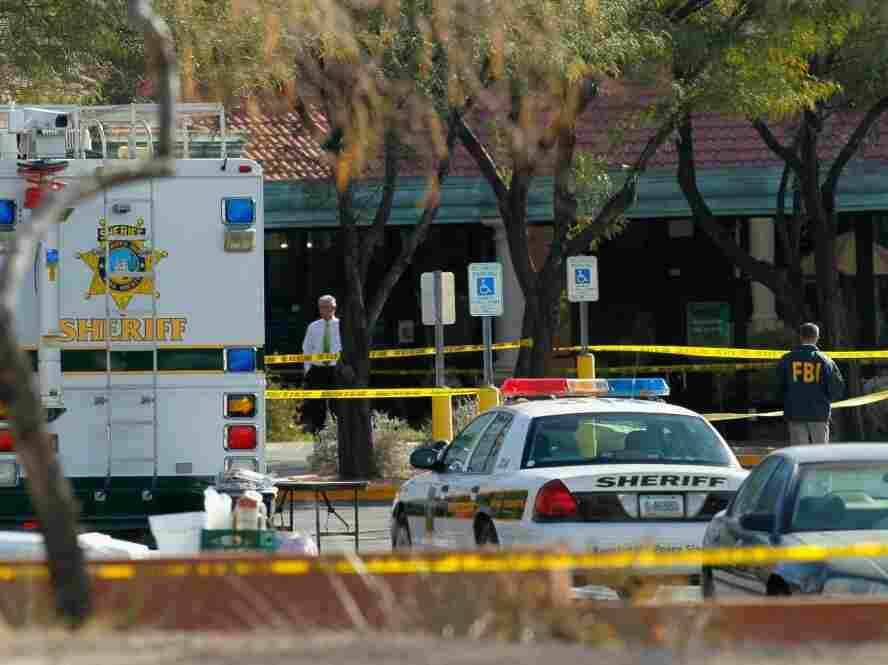 An FBI agent investigates the crime scene in front of the Safeway store in Tucson, Ariz., on Sunday. Hundreds of agents are working to understand what prompted 22-year-old Jared Loughner to allegedly go on a shooting rampage that killed six people and wounded Rep. Gabrielle Giffords (D-AZ). Kevin C. Cox/Getty Images hide caption 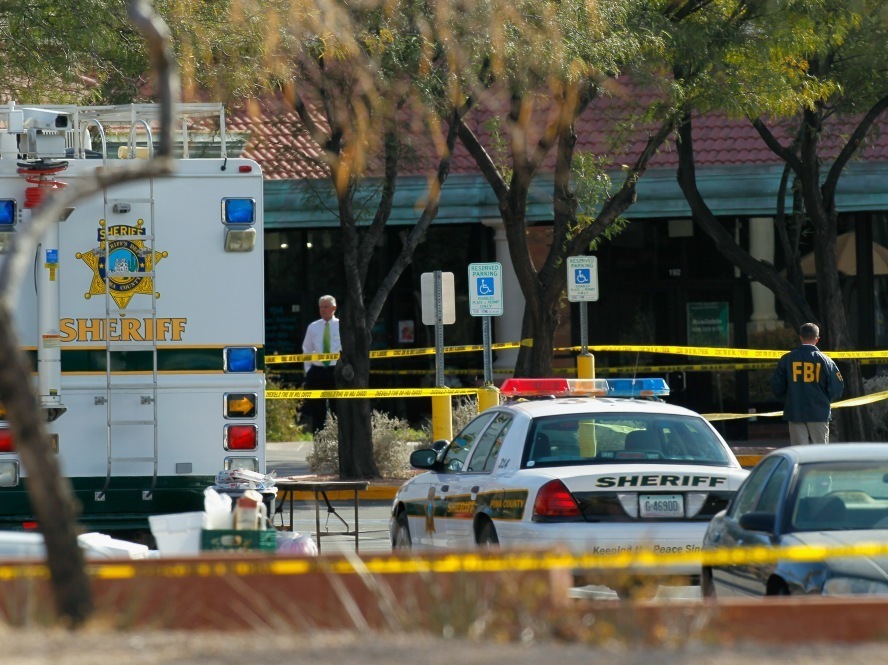 An FBI agent investigates the crime scene in front of the Safeway store in Tucson, Ariz., on Sunday. Hundreds of agents are working to understand what prompted 22-year-old Jared Loughner to allegedly go on a shooting rampage that killed six people and wounded Rep. Gabrielle Giffords (D-AZ).

Hundreds of FBI agents are working on an investigation aimed at understanding why a former community college student, with no history of violence, went on a shooting rampage outside a Tucson, Ariz., supermarket last weekend. The suspect, Jared Loughner, 22, allegedly killed six people, gravely wounded Rep. Gabrielle Giffords (D-AZ) and injured 13 others as he opened fire during a political event at a local shopping center on Saturday morning.

Inside the FBI, the investigation is known as a "Bureau Special," which means that agents from across the country are being called in to help gather evidence and construct a timeline of Loughner's movements in the days and weeks before the attack. Investigators tell NPR that they are trying to understand what motivated Loughner to lash out.

Loughner has taken the Fifth Amendment and officials say he has refused to speak to authorities or help in the investigation. He has been in custody since Saturday and, officials say, has barely exchanged a word with law enforcement officials. That's why FBI agents are trying to piece together much of his life without his help.

"Usually in a case like this, agents will try to account for literally every day of a suspect's life going back years," says Tom Fuentes, a former assistant director with the bureau. "Investigators will look for other possible associates, or any indication that someone might have talked Loughner into the attack. Even though it appears he was caught red-handed -- in this case he was literally tackled at the scene -- it helps the prosecution if there is a motive."

That's why hundreds of agents are interviewing and reinterviewing anyone who had any contact with Loughner in the past three to five years. Officials know, for example, that Loughner took math and literature classes at Pima Community College. The FBI is trying to interview every single person who had a class with him. Agents will also talk to teachers and administrators. Campus police had half a dozen contacts with Loughner because he was allegedly disruptive in class. The agents will talk to them, too. 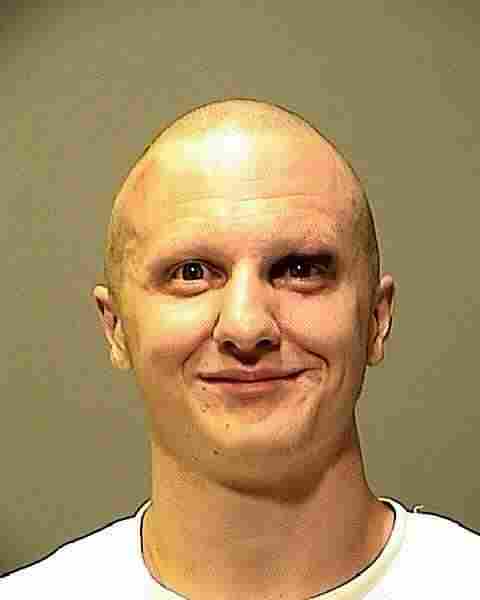 Loughner tried to join the Army, but sources say he apparently failed the drug test. The FBI will talk to the recruiter. It will look for any other jobs or programs for which he applied or submitted documentation. All those records will have to be subpoenaed and reviewed.

Officials say that in some respects, this case is easier than, for example, the Timothy McVeigh Oklahoma City bombing investigation. McVeigh had been in the military and traveled all over the world. Agents had to retrace his steps to interview every single person with whom he had been in contact. In Loughner's case, the circle is smaller and appears to be just around the Tucson area.

The FBI has already searched the Loughner residence. The 22-year-old lived with his parents not far from the shopping center parking lot where the shooting took place. Agents have bags of evidence from that sweep, including letters and writings from Loughner that, they say, indicate that he had been planning the shooting for some time.

All Hands On Deck

In 1979, Judge John Howland Wood Jr. of Texas became the first federal judge to be assassinated in the U.S. He was murdered outside his house, and the FBI had some 500 agents working on that case for months. He was killed, it turned out, by an organized-crime figure and contract killer named Charles Harrelson. (His son, as an aside, is actor Woody Harrelson of the television show Cheers.)

That case was an early "Bureau Special" and now the Loughner case is the latest one.

Officials say the current investigation is likely to take months. Just getting the phone records to follow up on Loughner's telephonic contacts will take weeks, officials say. Then they have to try to find out if he used Internet cafes or libraries or Skype. Then they have to subpoena those records, too.

Investigators already have a lot of the day of the shooting pieced together. They know Loughner bought the 9mm Glock handgun used in the shooting shortly after Thanksgiving. He purchased it legally at a local sporting goods store. The FBI has interviewed the clerk who sold it to him. Officials told NPR that the morning of the shooting Loughner went to a Walmart near his house to buy ammunition. Apparently, he was acting so strangely that the clerk was a little wary and wouldn't sell him bullets. Loughner had to go to a second store.

Then, at this second store, he allegedly bought 10 boxes of 50 bullets -- obviously much more ammunition than he needed, officials said. He had at least two extended magazines for the gun. Each carried 30 bullets, so it is unclear why he got so much ammunition. Several agents said that purchasing that many bullets and the extended magazines suggests that Giffords was not his sole target. They say he clearly intended to commit mass murder.

But again, until they unravel what his motive was, or understand what triggered the violence, what possessed Loughner to allegedly start shooting is unclear.