Accessibility links
Jared Loughner: A Puzzle, Even Before Arizona Shooting People have been trying to figure Jared Loughner out since long before he was accused of killing six people and wounding more than a dozen others Saturday. Friends and neighbors describe odd behavior. But one former classmate says, "None of us were really afraid for our safety." 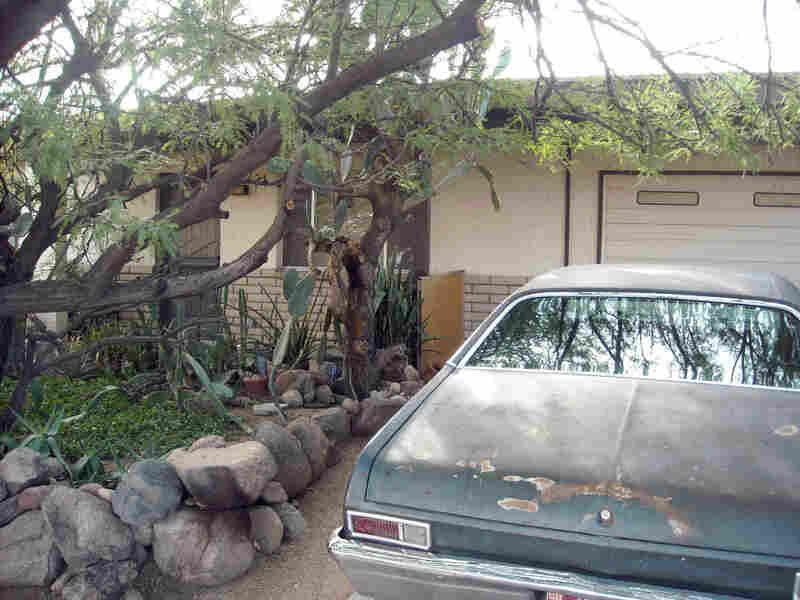 The home in Tucson, Ariz., where Jared Loughner, charged in a shooting that killed six and wounded more than a dozen, lived with his parents. AFP/AFP/Getty Images hide caption 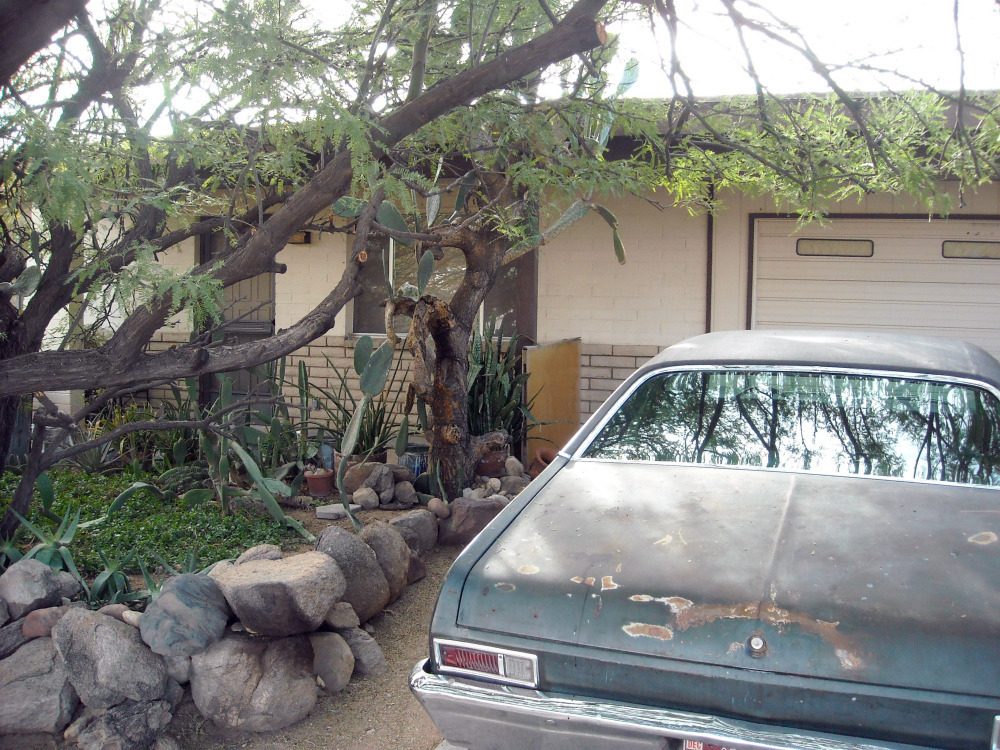 The home in Tucson, Ariz., where Jared Loughner, charged in a shooting that killed six and wounded more than a dozen, lived with his parents.

The city of Tucson has been besieged by a small army of people trying to answer a very basic, but difficult, question: Who is Jared Loughner?

There are journalists, law enforcement investigators and now, reportedly, private investigators working for Loughner's defense attorney. But it's also clear that people have been trying to figure Loughner out since long before he was accused of killing six people and wounding more than a dozen others Saturday.

The Loughners live on the north side of Tucson, in an older subdivision surrounded by saguaros. Steve Woods has lived next door for seven years.

"I've seen Jared walk down the street several times, and ... my son would try to say hi to him, and he still wouldn't say hi or anything," Woods says. "Just bundled up in his hoodie, he's got his earbuds in and just doing his whole thing, going down the street."

Loughner's father, Randy, moved here three decades ago, when this was a lonelier place. As things got more crowded, the family seemed to close in on itself. Woods points to the high bushes around the backyard.

"They really just didn't want to be want to be bothered -- leave us alone and we're just going to do our own thing," he says. "And now this."

A wall of TV cameras and 200-plus journalists are camped just off the end of the Loughner driveway. On Tuesday afternoon, hours into the reporters' stakeout, an unidentified man finally emerged to distribute a written statement.

The brief statement expressed the parents' deep sorrow. And it included the line, "We don't understand why this happened."

But a lot of people who never met Loughner seem to understand. Right-wing commentators have tagged him a "left-wing pothead," because he was busted for drug paraphernalia and he listed the Communist Manifesto on a reading list. Left-leaning commentators say his nonsensical YouTube videos about government mind control indicate the influence of right-wing conspiracy theories. 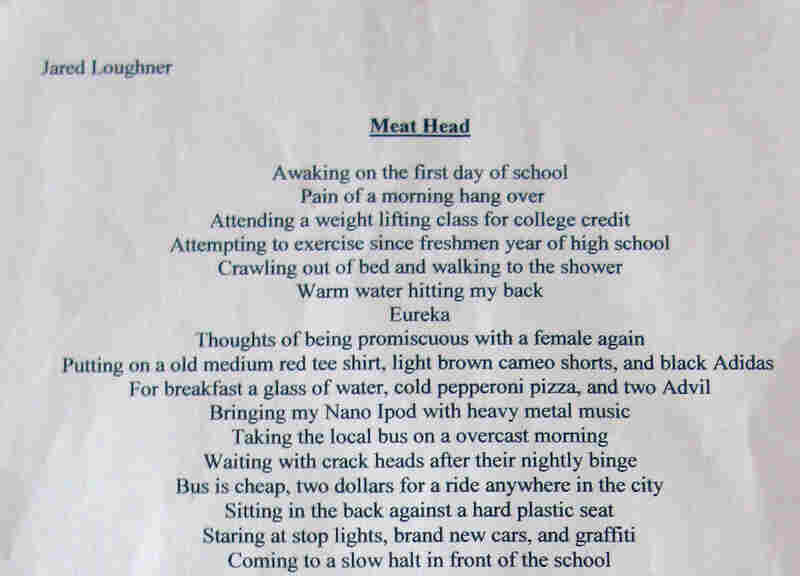 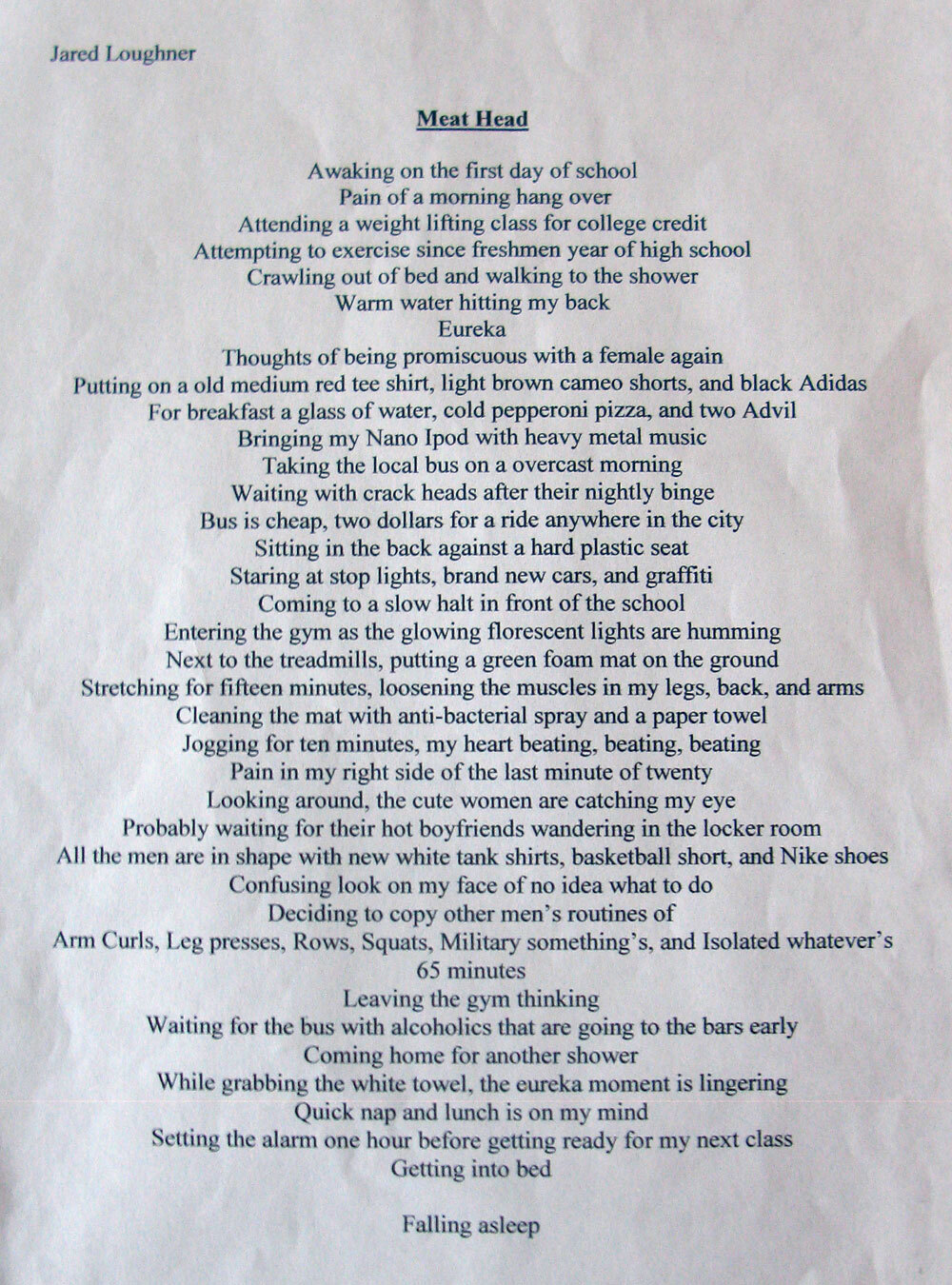 A portion of a poem by Jared Loughner written for a poetry class at Pima Community College. Document provided by former classmate Dan Coorough.

Neither side knows what it's talking about, says Amber Troy, who took a poetry-writing class with Loughner at Pima Community College last spring.

But it wasn't ideological, she says -- he just seemed to want to get a rise out of people. Troy recalls a moment when another student had just finished reading an autobiographical poem about abortion.

"So all of us were just very somber; she's in tears," Troy says. "And Jared starts laughing, like a lot, and we all just kind of look at him strangely and then he starts bursting out about tying a bomb to the fetus and making a baby-bomb."

Loughner wrote his own poetry in the class; another student, Don Coorough, saved a copy. He reads a portion: "Awaking on the first day of school / Pain of a morning hang over / Attending a weight lifting class for college credit / Attempting to exercise since freshmen year of high school / Crawling out of bed and walking to the shower / Warm water hitting my back / Eureka / Thoughts of being promiscuous with a female again."

Coorough says Loughner had the poem memorized, and he stood up in class and performed it with great drama -- at one point, grabbing his crotch. But Cooraugh says the poem itself is strangely empty.

"Most of us, when we have a 'Eureka!' moment," he says, "it's something much larger and much more grand and much more engaging than, 'Oh, I want to have some sex.' "

Loughner's friends talk about a change over the past few years. He didn't last long at jobs, and he was rejected by the Army. A friend from high school days, Travis Smith, wrote to NPR that Loughner "wasn't always a bad person." He says there were growing signs of mental illness.

Another friend, Bryce Tierney, hadn't seen Loughner for 10 months. Then, on Saturday, he got a voice mail from Loughner, saying, "Hey, man, it's Jared. Me and you had good times. Peace out. Later." Tierney's mother, Angie, says her son thought it might be a suicide message. Now, the voice mail is evidence.

And yet, while many people thought Loughner was strange, no one claims to have seen this coming -- certainly not Troy, his poetry classmate.

"I mean, he was definitely strange and, like I said, he wasn't the kind of person that I was going to go, you know, have coffee with," she says. "But, I mean, none of us were really afraid for our safety."

In fact, she says, when news of the shooting broke, it took her a while to realize the suspect was the same Jared she knew. And when contemplating Loughner's now-infamous head shot, shaved-headed and smirking, she says she doesn't even recognize him.