Accessibility links
How High-Frequency Trading Is Changing Wall Street Computerized algorithms now do much of the work on Wall Street. Financial journalist Felix Salmon says they've become ingrained in the financial system -- but are also increasingly complex and difficult to regulate. 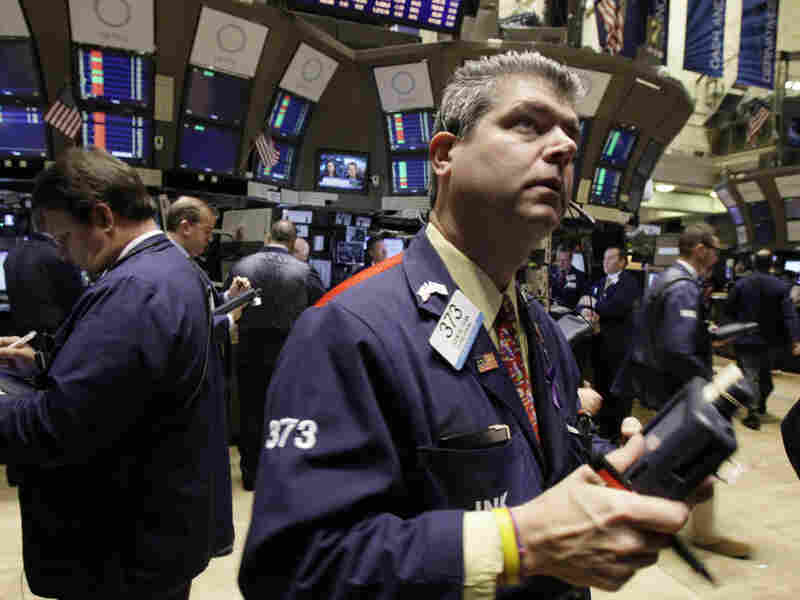 Trader John Panin checks prices as he works at the New York Stock Exchange. Fewer traders are now on the floors of the exchanges because of computerized trading. Richard Drew/AP hide caption 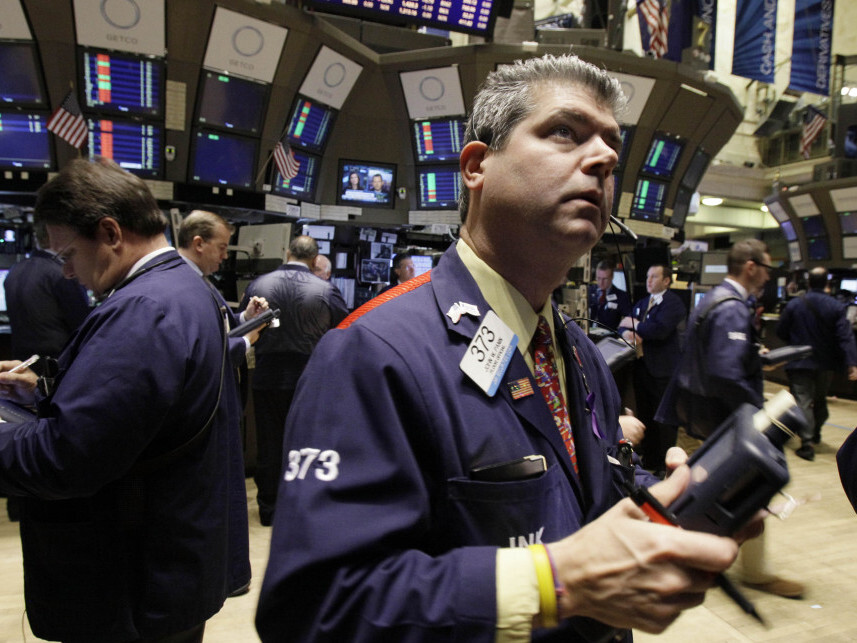 Trader John Panin checks prices as he works at the New York Stock Exchange. Fewer traders are now on the floors of the exchanges because of computerized trading.

On May 6, 2010, the Dow Jones industrial average dropped hundreds of points in a matter of minutes -- and then recovered moments later.

Known as the "flash crash," the incident sparked congressional hearings as well as an investigation by the Securities and Exchange Commission and the Commodity Futures Trading Commission. The two market regulators later issued a joint report in September blaming a single sale -- of $4.1 billion in future contracts -- for the nosedive.

Waddell & Reed, the mutual fund company that made the sale on that day in May, used automated high-frequency trading algorithms to start the trade. Those algorithms -- computer programs designed to get the best execution or return on a deal -- set in motion a chain of events that caused the stock market to plunge and then recover.

Shortly after the sale began, high-frequency algorithms run by other investment firms began to buy and sell the futures contracts at high speeds. Other automatic computerized traders shut down altogether. In 14 seconds, the futures contracts changed hands over 27,000 times. After an automatic stabilizer paused trading for five seconds on the futures exchange, the market steadied and then recovered.

But even after the SEC/CFTC report was issued in September, "no one really knows why that [crash] happened," says financial reporter Felix Salmon. "What we do know is that there were some crazy trades which happened in those 5 minutes. We had stocks trading for a penny a share or $100 a share, and no human would do that."

Salmon recently co-wrote a piece in Wired magazine about the computer algorithms transforming the way Wall Street conducts business. An algorithm, he explains, can analyze data much faster than the human mind ever could -- and can therefore respond instantly to market conditions.

On today's Fresh Air, Salmon explains the benefits -- as well as the downsides -- of using automated algorithms to make a lot of the investment and trading decisions on Wall Street. 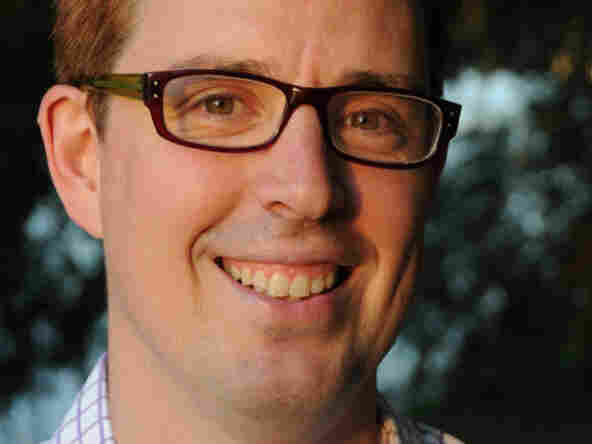 Felix Salmon is a financial journalist. He received the 2010 Excellence in Statistical Reporting Award from the American Statistical Association for his "statistical investigative reporting." Courtesy of Felix Salmon hide caption 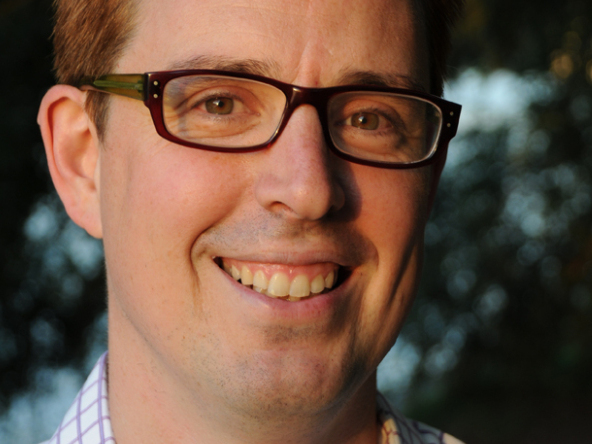 Felix Salmon is a financial journalist. He received the 2010 Excellence in Statistical Reporting Award from the American Statistical Association for his "statistical investigative reporting."

Though they're more efficient and faster than humans, computers use a different type of logic than individual investors, says Salmon, and no one is really sure how they all work in tandem with each other.

On the downsides of computers making investment decisions:

"The downside is they don't have a smell test. They don't have the basic common sense that most of the rest of us do. So back in May, for instance, we had this incident known as the flash crash, where the stock market plunged over 500 points in the space of about 5 minutes. And no one really knows why that happened. No one quite understands the mechanisms -- the self-snowballing -- which caused all of these computer programs to either pile onto the selling or else to just turn off altogether and to say, 'This is too volatile; we're leaving the market.' What we do know is that there were some crazy trades which happened in those five minutes. We had stocks trading for a penny a share or $100 a share, and no human would do that. What we think is that, left to their own devices, every so often when you have a highly complex system like this, it can just spin out of control, and it's hard to know when or how or whether a market is going to spin out of control in that way. Most of the time, computerized trading makes things faster and better and more efficient, but sometimes you get these things called tail events -- which you couldn't ever expect -- which can cause quite a lot of chaos."

On what computers are making decisions about

"They're looking at a huge number of data sets -- everything from weather forecasts to Twitter streams to whole areas of data streams which we can't even think of -- and they're putting them all together and they're analyzing them and they're learning from them. ... And they're looking to see what's happening in the market as all of this data comes through, and they're trying to find patterns there. And then what they're ultimately looking for is an if-then algorithm: If this kind of thing happens in the data stream, then you're likely to see stocks that go up or down, and then they use those movements and those predictions to make bets and then to hopefully make money."

"If you own a million shares of IBM and you decide you want to sell those shares, then what you don't do is simply go along to the New York Stock Exchange and say, 'I've got a million shares of IBM. Does anyone want to buy this?' Because the minute that the market knows there's a huge seller in the market, then the price will plunge and you'll get a very bad price for your shares. So what you do is try and hide the fact that you're trying to sell such an enormous block of shares. And you try and use algorithms to try and hide what you're doing to get the best possible price for your shares."

On algorithms designed to spy on other algorithms

"That's known as predatory trading, and it's a very large business. In fact, a lot of the algorithms which are used to make simple trades, one of the things they do is try to trick other algorithms to think they're saying 'buy' instead of selling so that the other algorithms will try to go in and raise the price. It gets very complicated. It's a spy-versus-spy thing."

On the complexities of computerized algorithms

"We don't understand the feedback loops between them. We don't understand what causes individual stocks or entire market indices to move. We have an incredibly complex system with only the most rudimentary controls. And we got a hint of what could happen last May, during the flash crash, but we have no idea what other things might happen. We don't have a flight simulator for stock markets where we can run a whole bunch of possible scenarios and see how the stock markets might react. We really have no idea how these markets work or how these complex systems work or how they might just explode one day in a very unpredictable manner."