Accessibility links
Afghans Wary Of Building Up Local Policing Forces U.S. commanders in Afghanistan are pushing for the rapid creation of local community watch programs in order for U.S. forces to draw down. But many Afghans are reluctant to create yet another armed group in a fractured country. 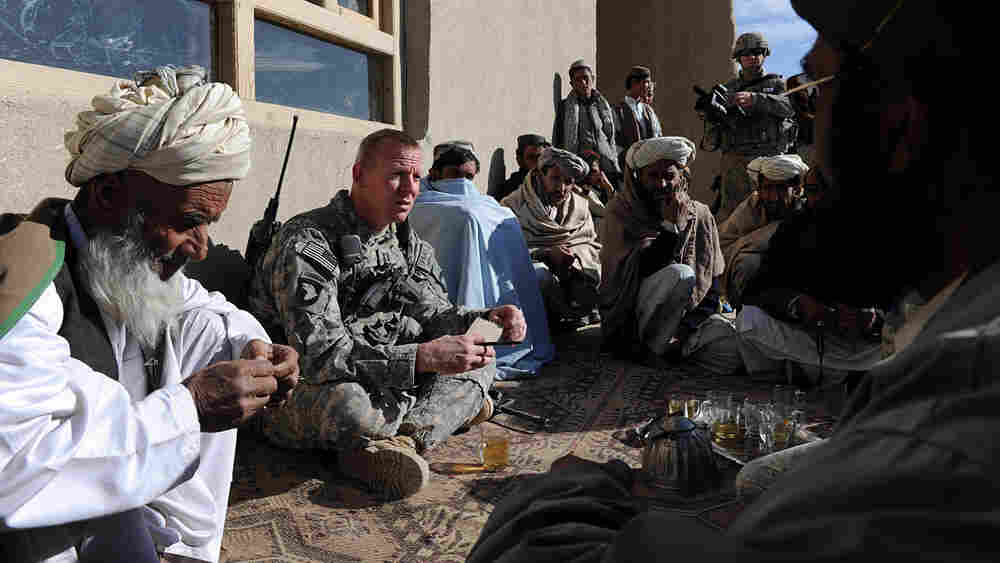 In Kabul this week, U.S. Vice President Biden said the surge in American troops has arrested the momentum of the Taliban insurgency, and he pledged that U.S. forces would draw down as Afghan troop numbers build up.

To that end, U.S. commanders in Afghanistan are pushing for the rapid creation of local community police forces. But many Afghans are reluctant; they have reservations about creating yet another armed group in a fractured country.

About 100 miles south of Kabul, Ghazni province is a world away from the capital. On election day last year, Taliban threats kept voters away from the few polling stations in the mostly Pashtun province that were considered safe enough to open. In Andar district -- with a population of 110,000 -- exactly three people went out to cast a vote.

The soldiers of the 3rd Battalion, 187th Infantry, travel everywhere outside their tiny fort in titanic mine-resistant trucks. For the four months they've been in Andar district, they've skirmished almost every day. Lt. Col. David Fivecoat speaks of the enemy in personal terms. 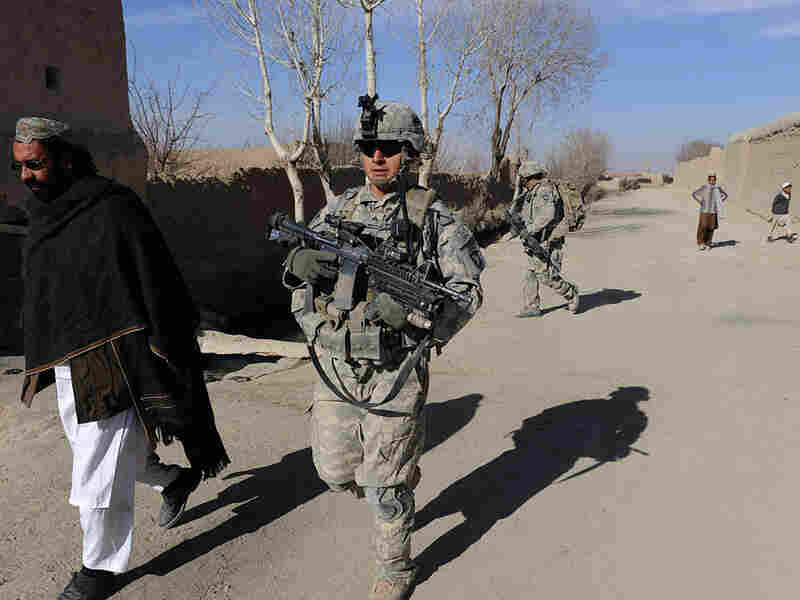 U.S. soldiers of the 3rd Battalion, 187 Infantry, B Company patrol Bangi village, Andar district in Ghazni province, Jan. 6. One of their missions is to persuade local Afghans to participate in a community watch program. So far, no one has signed up. Shah Marai/AFP/Getty Images hide caption

"After four months of tough fighting, we've attrited [reduced] his capabilities and control and have begun the slow process of every counterinsurgency, of turning the control back over to the government," he says.

But it's not the first time NATO troops have tried to take back Andar district from the Taliban, and it's not the second. In 2006, the U.S. Army's Operation Mountain Fury was supposed to clear Ghazni province. So were sporadic raids in 2007. U.S. soldiers from the 187th arrived there in September, replacing Polish NATO soldiers, but now the strategy is different.

On a recent day, chickens scatter in a yard as Capt. Aaron T. Schwengler and a platoon of B Company soldiers enter the farmyard of a village elder in a hamlet called Bangi. With soldiers on the roof keeping watch, Schwengler takes off his helmet and sits on the ground for tea.

"We appreciate the hospitality, having us here in Bangi," he tells a group of elders. "It's always nice to come here because we don't get shot at and I appreciate that."

Schwengler isn't joking, and the elders don't laugh. He can't say that about many villages in the district. Bangi is close enough to B Company's base that the Taliban shy away from it. Schwengler has promised money to rebuild the irrigation canals in the village, and he has asked about building a school, which Bangi hasn't had since the 1970s. But he wants something in return.

Schwengler is hoping to recruit, pay and arm a squad of the new community watch program. The program has changed its name several times since summer, but it's based on the one in Iraq that helped turn the tide against al-Qaida. The commander of U.S. forces here, Gen. David Petraeus, pushed the program through despite public doubts expressed by Afghan President Hamid Karzai. B Company has been canvassing the local villages hoping to get elders to come to their base for a shura, or council, to start forming the village guards.

One village elder, Muhammad, says he agrees with everything that Schwengler and the local district governor want to do, and he promises to come to the shura to discuss it.

Waiting For Someone To Take The Lead

But two days later, the day of the shura, only the two elders from Bangi turn up at the base. Schwengler says the other villages are too scared to show.

"The Taliban [came] in after we did and told them not to support the shura and not to show up," he says.

Even the elders from Bangi have reservations about the program.

"We tried that program during the Russian occupation," says Muhammad, "and when we armed people they went and joined the insurgency."

The elders leave the base with a promise to consider the program -- especially if other villages go first.

"If one village does it, others will follow. It's just a matter of that one village being brave enough and to do it successfully," Schwengler says.

He got some more encouraging news the following day. A few dozen elders did meet with the captain -- off the base, and at the invitation of the district governor. They started talking about setting up a community watch, but no one has signed up yet.