Accessibility links
The Nation: NGOs Have Failed Haiti In the year-long wake of Haiti's earthquake, much remains to be done -- and a majority of the charity money is still unspent. Isabeau Doucet of The Nation argues that the past year reveals the weaknesses of the NGO aid system.

The Nation: NGOs Have Failed Haiti

The Nation: NGOs Have Failed Haiti 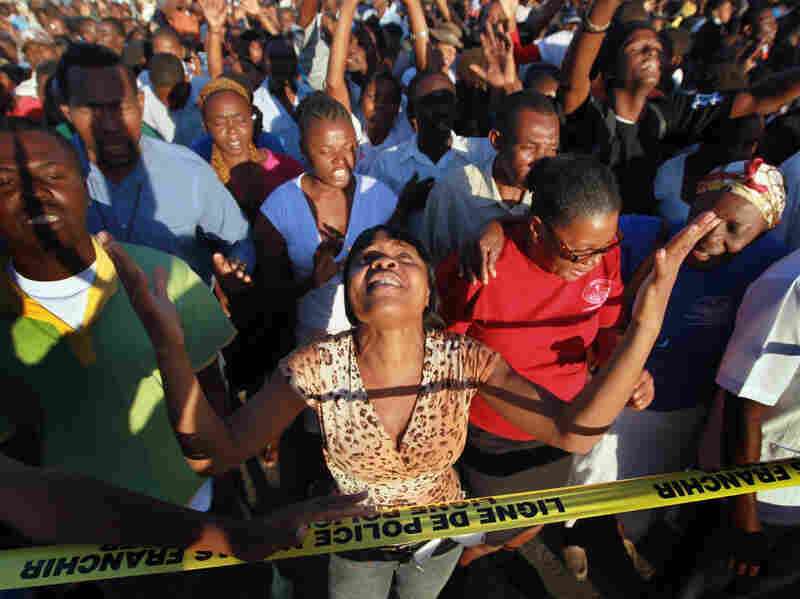 People attend a prayer service near the Presidential Palace in Port-au-Prince in memory of those killed a year ago in the massive earthquake in Haiti. With much of the aid money unspent, the country struggles to repair the damage. Joe Raedle/Getty Images hide caption

In the aftermath of the earthquake that hit Haiti on January 12, 2010, those who were desperate to find something positive in the tragedy that claimed an estimated 230,000 lives talked about the "opportunity" the destruction could present for the impoverished nation to "build back better." On the tragedy's one-year anniversary, it's become clear that perhaps the only positive aspect of the past twelve months has been the exposure of the failures of the NGO aid system, and the international community's long-standing use of the country as a laboratory for cashing in on disaster -- both of which have been wrecking havoc on this country since long before the earthquake.

Despite being home to the world's highest density of NGOs per capita, Haiti is presently being ravaged by a cholera epidemic with an official death toll of some 3,500, with experts estimating the number of dead at twice as high.

More than a million people are still living in overcrowded camps under the same now-frayed tarps they received last January. A third of these camps still don't have toilets, and most Haitians have no access to potable water.

The cholera may have spread to Haiti via latrines on the base of the U.N.'s Nepalese troops, which emptied into the country's main river, inflaming the already widespread contempt for the UN's interminable MINUSTAH occupation. This, followed by an election bankrolled and endorsed by the international community, but widely denounced within Haiti as illegitimate and fraudulent, has caused  protesters to barricade streets in several cities with burning tires, cars, garbage dumps, as well as coffins and portable toilets as barricades, hindering cholera relief, spreading the epidemic and plunging the country deeper into socio-political chaos.

A lull of a political stalemate has settled over Haiti in anticipation of the month-and-a-half-old election results. But the Center for Economic and Policy Research independently recounted and reviewed the 11,181 tally sheets and found massive irregularities, errors, and missing vote totals. "The OAS can't salvage an election that was fundamentally illegitimate, where nearly three-quarters of the electorate didn't vote, where the most popular political party was excluded from the ballot, and the vote count of the minority that did vote was severely compromised," said Mark Weisbrot, CEPR co-director.

In the past weeks, several highly-placed diplomatic and Haitian establishment figures have voiced what Haitians have been saying for months: forever excluded from any process determining their political and economic sovereignty, Haitians are now being excluded from the reconstruction of their nation.

The twelve Haitian members of the Interim Haiti Reconstruction Commission—a twenty-six-member body that decides where to spend money donated to Haiti's reconstruction—presented a letter of protest to co-chairman Bill Clinton at the commission's most recent meeting on December 14.

They complain of being "completely disconnected from the activities of the IHRC," given no background information on the projects they are supposed to fund, given "time neither to read, nor analyze, nor understand—and much less respond intelligently—to projects submitted" the day before they're voted on. There is no follow up on previously approved millions in funds; they "don't even know the names of the consultants who work for the IHRC nor their respective tasks.""

These twelve board members surmised that their only function is to rubber stamp, as Haitian-approved, decisions already made by the executive committee—Bill Clinton, Haitian Prime Minister Jean-Max Bellerive, and long-time US State Department employee at USAID as well as a US informant inside President René Préval's inner circle Gabriel Verret.

As if to highlight the disposable role of Haitian leadership, the last meeting went ahead without the second co-chair, Prime Minister Jean-Max Bellerive, who couldn't attend because the meeting was held in the Dominican Republic, as post-election political turmoil shut down Haiti's capital.

Why has the international community excluded Haitians from the process of allocating aid funds? A recent AP investigation revealed that of every $100 of Haiti reconstruction contracts awarded by the American government, $98.40 returned to American companies, suggesting that non-Haitian companies and organizations have much to gain from the relief effort. Haiti's reconstruction, like almost everything else in that country, has been privatized, outsourced, or taken over by foreign NGOs.

Last week, OAS special representative to Haiti Ricardo Seitenfus was ordered to take an indefinite leave after giving a hard-hitting interview denouncing U.N.'s "imposed" occupation, which, he said, was "transforming Haitians into prisoners on their own island." He argued that NGOs use of Haiti as a "training ground" for young humanitarian "amateurs," saying that "Haiti's original sin, on the world stage, is its liberation," being the first black republic born of the only successful slave revolution in modern history. For the past 200 years, Seitenfus continues, "It is force that defines international relations with Haiti and never dialogue."

It's not so much what he says -- it's what Haitians say all the time -- but the fact that he's an OAS representative. Earlier this week, Seitenfus gave another interview in which he recounted with horror that "on November 28, the day of the elections, there was discussion in a meeting of the Core Group (donor countries, OAS and the United Nations) of something that seemed to me simply frightening. Some representatives suggested that President Rene Preval should leave the country and that we should think about an airplane for that purpose."

To Seitenfus, this was an ominous deja vu of the U.S., French and Canadian backed coup d'etat against democratically elected President Jean-Bertrand Aristide, who still lives in exile after having been flown out of Haiti on a plane in 2004.

Aristide's political party, still the most popular in Haiti, was excluded from running, making these elections illegitimate a priori. On top of an already low voter turn out, would-be voters were disenfranchised, reportedly walking past the bodies of cholera victims on the street in search for different polling station with their name on the list, only to find not their names the name of their neighbor who died in the earthquake. Haitians called the practice "eleksyon zombi," because the dead were being used to do the bidding of their enemies. By noon, the majority of the candidates held a press conference calling for the election to be annulled.

Edmond Mulet, MINUSTAH occupation troop's first in command -- no doubt sitting at this meeting with Seitenfus -- personally called two of the leading candidates, Michel Martelli and Mirlande Manigat, the morning after the election telling them to withdraw from the group of candidates calling for the election's annulment because (he told them) they are the leading candidate. Four other candidates also claim that Mulet, or someone from his office, called urging them to withdraw because they were in a favorable position.

Was Mulet playing divide and conquer to save face for organizing the security and logistics for an election marred by rampant fraud? Was he calling on behalf of the U.N., or someone else?

Imposing a weak unpopular government that can be dismissed as hopelessly corrupt, ensures that Haiti serve the world as a disaster training ground for international troops and NGO workers, while transnational reconstruction companies can frolic in the lavish destruction.

Disasters catalyze neo-liberal policies of liquidating the state and atrophying the mechanisms of democracy have been carried out to such a perfection that the only "opportunity" brought on by the earthquake, should be, as Haitian veteran observer put it, to "listen to Haiti, because it is the canary in the world's mine."