Accessibility links
Tora Bora, The Turning Point In 'The Longest War' In the nearly 10 years since the terrorist attacks of Sept. 11, 2001, Osama bin Laden remains on the run. In The Longest War, Peter Bergen gives a comprehensive account of the development of al-Qaida and the U.S. response to the terrorist organization. He talks about the strategic missteps on both sides. 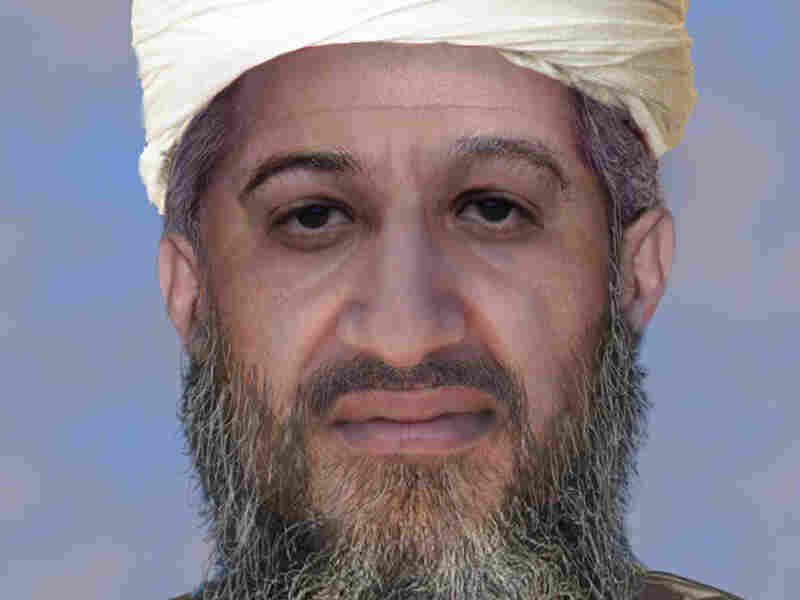 This digitally enhanced image from the U.S. Department of State shows what Osama bin-Laden could look like today. AP/U.S. State Department hide caption 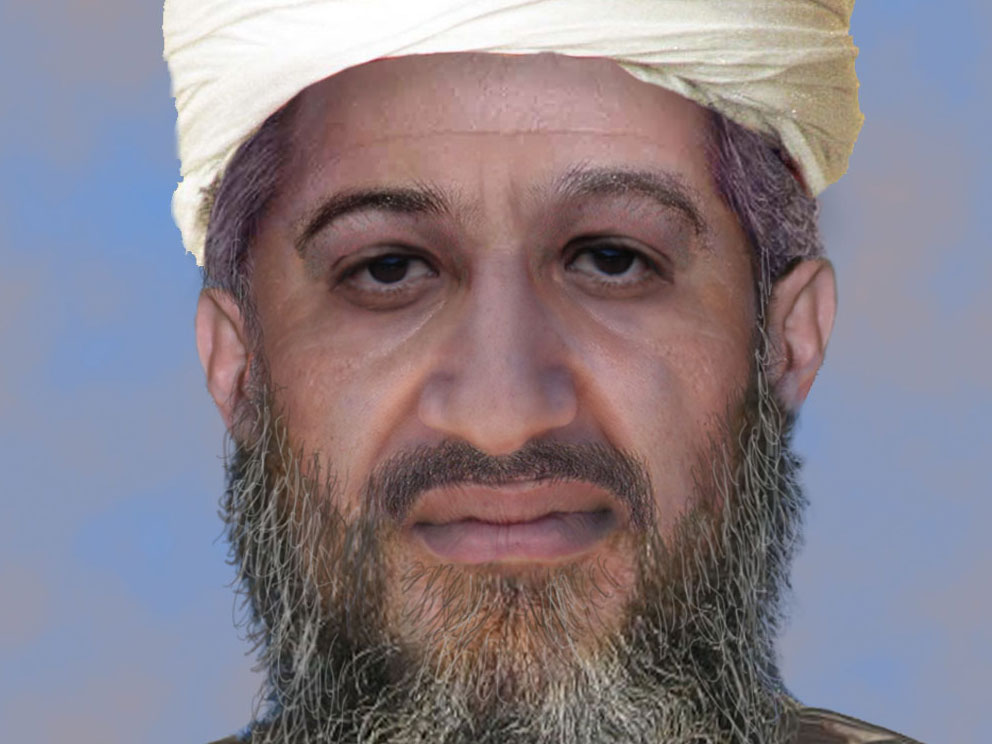 This digitally enhanced image from the U.S. Department of State shows what Osama bin-Laden could look like today.

In the nearly 10 years since the terrorist attacks on Sept. 11, 2001, the U.S. has launched wars in Afghanistan and Iraq, and entered bitter debates over interrogation techniques and renditions. This decade has also seen the spread of terrorist networks linked to al-Qaida around the globe.

In The Longest War, Peter Bergen gives a comprehensive account of the development of al-Qaida and the U.S. response to the terrorist organization. He talks about the strategic missteps made by both sides.

Bergen says he believes the single most important battle in the conflict came in December 2001, when bin Laden and al-Qaida fled from their bases in Afghanistan to their mountain retreat in Tora Bora.

"I assembled accounts of the battle from both al-Qaida's perspective and also CIA, U.S. Special Forces, and some of the Afghan warlords who were there on the ground," Bergen tells NPR's Neal Conan. 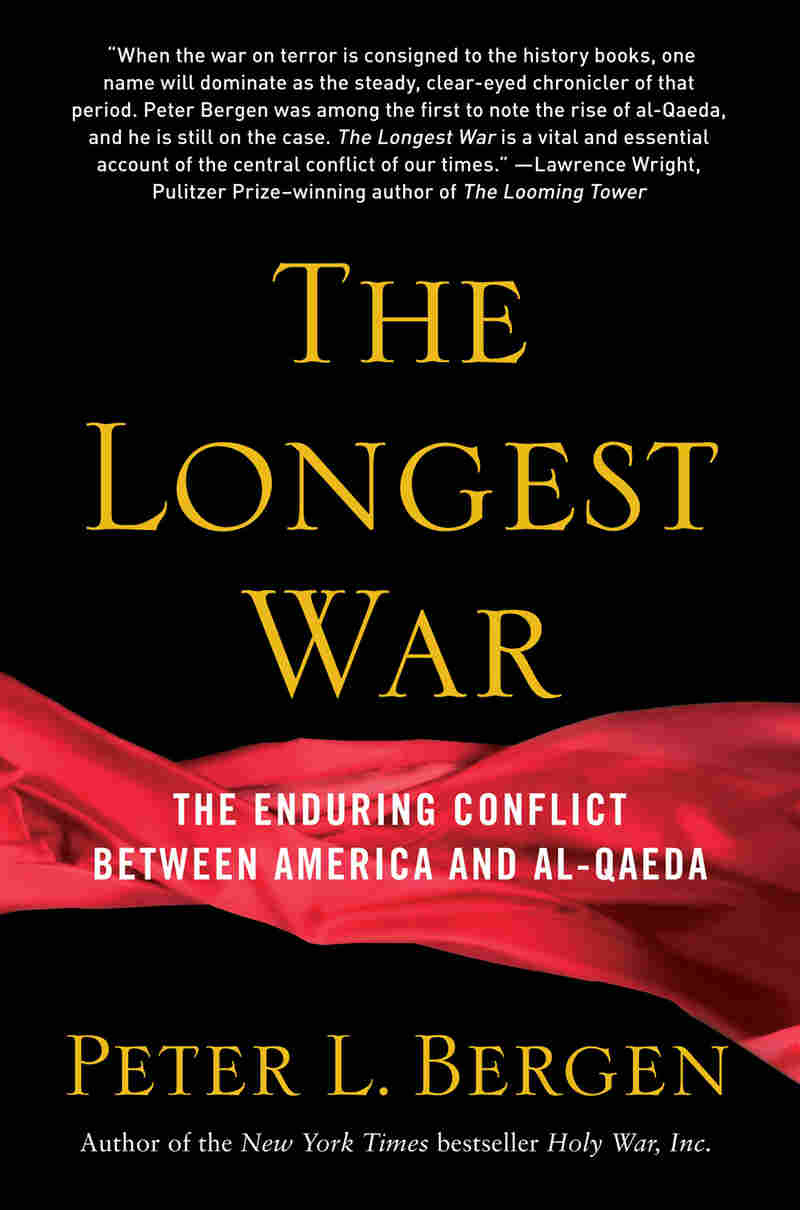 Bergen says he learned from the Special Forces' official history of the battle that during the period of Dec. 9 to Dec. 14, 2001, "multiple sources of intelligence placed bin Laden at the battlefield."

And that's the last time, says Bergen, that "we really knew where he was."

Bin Laden chose Tora Bora for a reason, he says.

"He knew this area like the back of his hand," says Bergen. "He'd been visiting this area on and off for 15 years, he built roads in the mountains -- he knew this place intimately."

So it was no accident that "he fled there, and then staged one of history's great disappearing acts from Tora Bora," he says.

Following the battle at Tora Bora, "the hard core of al-Qaida lived to fight another day," Bergen says.

Could something have been done at the Battle of Tora Bora that would have turned it into a decisive victory for the U.S.? Bergen thinks it's possible.

There were a variety of reasons that the requests for more troops went unfulfilled.

"It was a concern that more American boots on the ground would annoy our local Afghan allies," and there were concerns about search and rescue, and about helicopters, Bergen says.

"But the point is, that this was never tested," he says. "The most significant battle in the war on terror was left up to 70 U.S. Special Forces, some CIA guys, a handful of British special boat service operators, and thousands of our not particularly effective Afghan allies."

At 2:30 a.m. on August 29, 2001, the lead hijacker Mohammed Atta called Ramzi Binalshibh, his al-Qaeda handler, telling him he had a riddle that he was trying to solve: "Two sticks, a dash and a cake with a stick down -- what is it?" Binalshibh thought for a while and suddenly realized that the two sticks were the number 11, and a cake with a stick down was a 9, and that Atta was telling him the attacks would happen in two weeks, on 11/9. That date is known as 9/11 in the United States.

Binalshibh, a slight, intensely religious Yemeni who had volunteered to be one of the hijackers, was turned down for an American visa. As a consolation prize for not becoming a "martyr," Binalshibh took control of the coordination of al-Qaeda's plans for the attacks on America from his apartment in Hamburg, Germany. Atta communicated by email from the United States with Binalshibh, apprising him of the progress of the plot. In his email messages, Atta posed as a university student writing to his girlfriend "Jenny." Atta used an innocuous code to alert Binalshibh that the plot was nearing completion: "The first semester commences in three weeks … Nineteen certificates for private education and four exams." The nineteen "certificates" referred to the nineteen al-Qaeda hijackers and the four "exams" to the four targets of the soon-to-be-hijacked planes.

On September 5, Binalshibh left Germany for Pakistan, where he dispatched a messenger to Afghanistan to warn Osama bin Laden about the exact timing and scope of the attacks. Expecting some kind of American reprisal for the coming assaults on Washington and New York, likely in the form of cruise missile attacks like those President Clinton had ordered following al-Qaeda's 1998 bombings of two U.S. embassies in Africa, all of the organization's camps and residential compounds were put on high alert in the days before 9/11. A Yemeni living at al-Qaeda's al Farouq training camp in Afghanistan recalled that the trainers at the facility said, "If anyone wanted to leave, we were free to leave. There might be problems and there might be bombings." In Kandahar, the southern Afghan city that served as the de facto capital of the Taliban, bin Laden urged his followers to evacuate to safer locations in early September.

Earlier that summer the scuttlebutt around the al-Qaeda campfires was that a large anti-American attack was imminent. Feroz Ali Abbasi, a British militant of Ugandan descent who was eager to conduct terrorist operations against Jews and Americans, remembered "this information being commonly known amongst everybody in the training camps and guesthouses." Even "American Taliban" John Walker Lindh heard an instructor at his camp tell a group of trainees that bin Laden had dispatched dozens of suicide operatives for attacks against the United States and Israel.

In mid-June 2001 bin Laden and his top military commander, Mohammed Atef, also dropped broad hints that a major attack was in the works, during a meeting they held in Kandahar with Bakr Atyani, a correspondent for the Middle East Broadcasting Corporation. Atef said that "in the next few weeks we will carry out a big surprise and we will strike or attack American and Israeli interests." Atyani asked bin Laden, "Would you please confirm that?" The al-Qaeda leader responded only with one of his slight, enigmatic smiles. The report about al-Qaeda's plans for an anti-American attack was subsequently picked up by the Washington Post on June 23. For those who cared to look during the summer of 2001, al-Qaeda's plans to wreak havoc on the United States were an open secret.

But the timing, targets, and scale of the operation was information that was tightly held, confined only to the top leaders of al-Qaeda and the pilots of the planes to be hijacked. Ayman al-Zawahiri, the leader of the Egyptian Jihad group, first learned of the details of the operation in June 2001, and that was only after his organization had formally contracted its alliance with al-Qaeda. Bin Laden even kept his spokesman in Afghanistan, Suleiman Abu Ghaith, in the dark. A former high school teacher from Kuwait, Abu Ghaith learned about the attacks on Washington and New York from media reports.

Similarly, the "muscle" hijackers on the four planes, whose primary role was to restrain the passengers on the flights, knew that they were volunteering for a suicide mission in the United States, but only at the final stage of the operation were they told their targets. Before they journeyed to the United States, the hijackers videotaped suicide "wills," which al-Qaeda's video production arm would release over the coming years to milk the 9/11 tragedy repeatedly.

In the final run-up to the attacks, Binalshibh made a last call to Ziad Jarrah, a onetime Lebanese party boy who had moved to Hamburg in 1996 and had fallen in there with the zealots in al-Qaeda's local cell. Despite his increasing militancy, Jarrah continued to date a pretty Turkish dentistry student he had met in Germany. Now Jarrah was in the States to train as a pilot-hijacker, but in the summer of 2001 Binalshibh was concerned that personality clashes between Jarrah and the lead hijacker, Mohammed Atta, a dour misogynist known as "the Ayatollah," might endanger the entire operation. Binalshibh asked Jarrah, "How do you feel?" He replied, "My heart is at ease, and I feel that the operation will, Inshallah [God willing] be carried out." Jarrah would soon crash United Airlines Flight 93 into a Pennsylvania field, killing everyone on board. 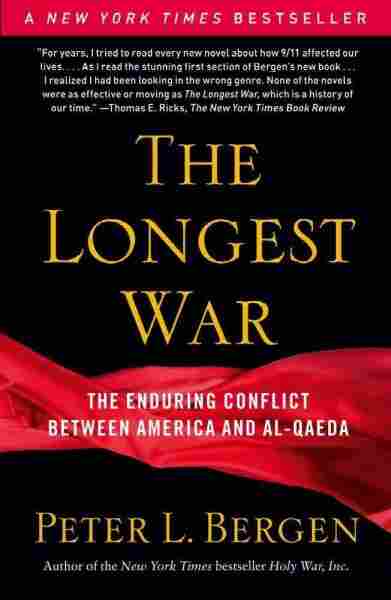