Accessibility links
Behind 'Hornet' Mask, An All Too Recognizable Rogen Playing L.A. playboy Britt Reid, who becomes anti-superhero Green Hornet by night, the actor disappears not into character but into a thicket of his signature comedy tics. His voluble, lazy protagonist signals a different angle on the genre -- but it's one that will turn most audiences off.

Behind 'Hornet' Mask, An All Too Recognizable Rogen

Behind 'Hornet' Mask, An All Too Recognizable Rogen 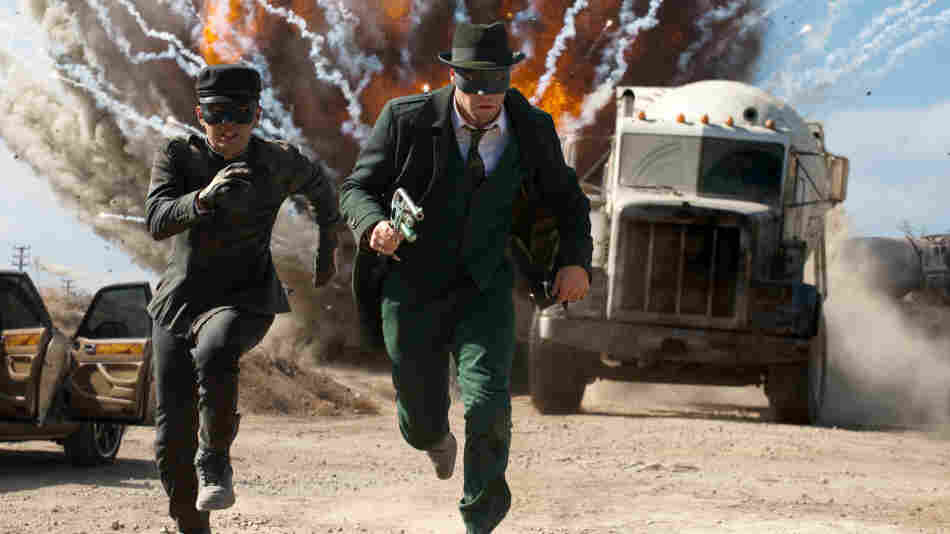 You Can Run, But You Can't Hide: After his father's death, Britt Reid (Seth Rogen, right) teams up with Kato (Jay Chou) to take down criminals. Their first archvillain: Benjamin Chudnofsky (Christoph Waltz, not pictured) and his mob syndicate. Jaimie Trueblood/Columbia Pictures hide caption

'I Want You To Take My Hand'

'I Want You To Take My Hand'

'The Greatest Moment Of My Entire Life'

'The Greatest Moment Of My Entire Life'

Point of order: You can call Michel Gondry's The Green Hornet many things -- loose, talky and fitfully charming among them -- but one thing it most emphatically is not is a comic book movie.

Granted, it escapes that designation on a technicality: The Green Hornet has in fact made sporadic comics appearances over the years, but our hero was created for radio. To follow the true provenance of Gondry's film, look to that long-running radio program, two film serials and a short-lived '60s television iteration, which starred Van Williams as the Hornet and a pre-Fist of Fury Bruce Lee as trusty butt-kicking sidekick Kato.

More fitting to dub this a superhero movie, then, replete with the factory-installed genre trappings of origin story, crime-fighting gadgetry, secret identity, dastardly villain and comely love interest. Upon the death of his disapproving father (Tom Wilkinson), the dissolute Britt Reid (Seth Rogen) inherits a fortune and the crusading L.A. newspaper that built it. When Reid stumbles across the fact that his father's mechanic (Curse of the Golden Flower's Jay Chou, donning Kato's mask) can outfit a vehicle with surface-to-air missiles as easily as he can gap spark plugs, the two decide -- after, it must be noted, much discussion -- to clean up the streets of Los Angeles by posing not as heroes but as mysterious masked gangsters.

Standing in their way: an evil crime lord played by Inglourious Basterd's Christoph Waltz, who brings his singular brio to a role originally intended for Nicolas Cage. Standing by their side: Reid's executive assistant/amateur criminologist Lenore (Cameron Diaz), who unwittingly helps the duo plot their next moves.

Given that plot outline, you'd be forgiven for expecting the film to unfold with the familiar, implacable goodie-vs.-baddie rhythms of its superheroic film fellows. But The Green Hornet confounds those expectations in a manner that's initially agreeable, even winning. Rogen co-wrote the screenplay with buddy Evan Goldberg, his writing partner on Superbad and Pineapple Express; small wonder, then, that The Green Hornet should evince the shaggy, low-stakes, wildly discursive structure of your stoner college roommate's late-night talking jags. For long stretches of the film, Rogen and Goldberg are content to dial the genre elements so far down that they barely register, if it allows them to pursue a joke or follow a particularly meandering bit of dialogue to see where it leads. If doing so robs the proceedings of any palpable sense of danger or suspense -- and it does -- they seem perfectly cool with that, man. 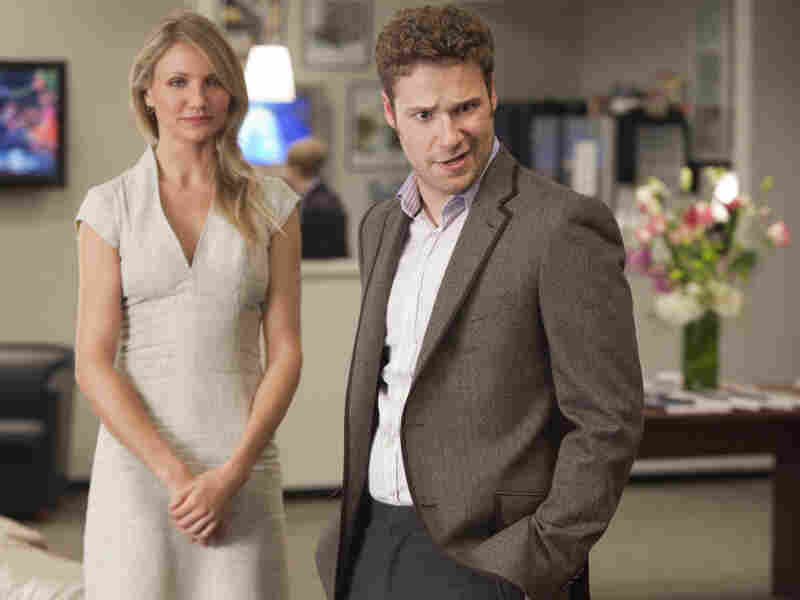 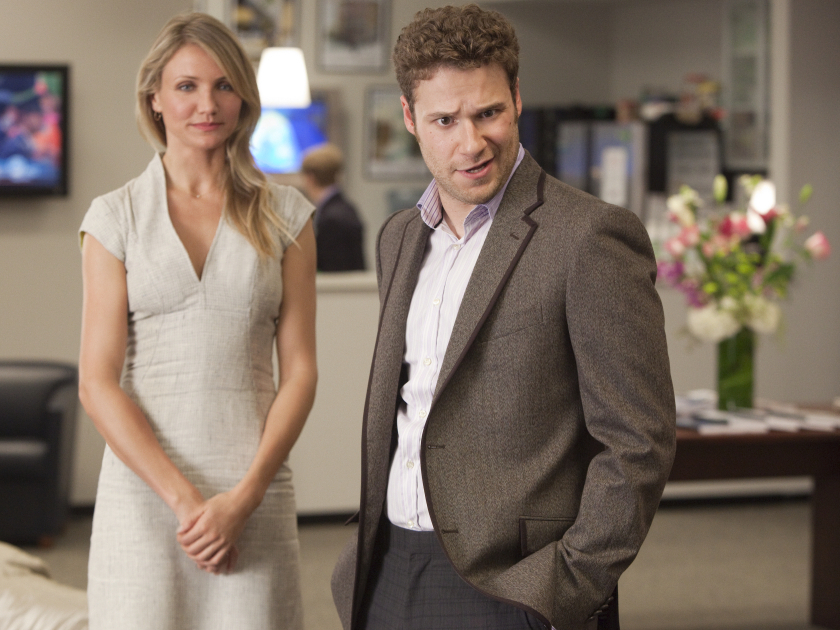 Cameron Diaz plays Lenore Case, an executive assistant with a sideline in criminology.

Those who decry the superhero genre as static, schematic and overdetermined may welcome the infusion of this loose, improvisational sensibility. It certainly intersects the viewer's expectations of superhero fare at an oblique angle: The film doesn't mock the genre's constraints and cliches as much as it gently interrogates them.

Why, for example, must our hero be ... heroic? What if he weren't driven by a sense of justice, or a desire to do good, or anything resembling a core morality? What if instead he remained a lazy, cowardly, spoiled thrill-seeker throughout? What if Bruce Wayne were Spencer Pratt?

There's something gutsy about the way Rogen and Goldberg stress the anti- in their antihero and steadfastly refuse to allow Reid to grow, or deepen, or take even a single step off the dime of boorish self-involvement on which he starts the film.

Ultimately, however, it's a choice that comes at a cost. Somewhere about the film's midway point, Rogen's character -- who remains onscreen for most of the film's two-hour running time, and spends nearly every second of that screentime ceaselessly talking -- becomes flatly unbearable. Even those favorably inclined to Rogen's comedic approach, which consists of enthusiastically announcing and then proceeding to comment at considerable length about the events of that particular moment, will likely tire of spending so much time directly under the torrent of his full-bore logorrhea.

Easily the most puzzling thing about this superhero-film-cum-SNL-sketch is how light a footprint its director leaves. In films he writes or co-writes, Gondry's name signals an organic, visual approach to storytelling, be it cool and trippy (Eternal Sunshine of the Spotless Mind) or deliberately and ingeniously low-fi (The Science of Sleep, Be Kind Rewind). Only intermittent flashes of that Gondry show up in The Green Hornet: a scene transition here, a brief split-screen effect there. He does stage his fight scenes cleanly, however, favoring full and medium shots that allow us to track our heroes' movements, eschewing the close-in, quick-edit anatomical montages that have come to typify the genre.