Accessibility links
An End To Politics As Usual In Arizona — For Now There's widespread agreement among state politicians that they need to take more care with their rhetoric in the wake of Saturday's shootings. But there are also questions about how long gentler tones will predominate in a state where politics have grown more polarized — and far more heated — in recent years.

An End To Politics As Usual In Arizona — For Now

An End To Politics As Usual In Arizona — For Now 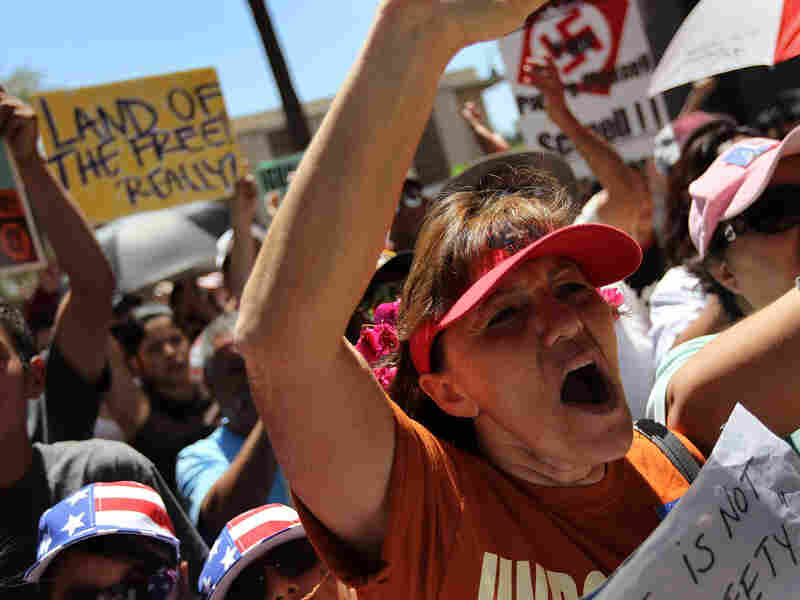 Opponents of Arizona's controversial immigration-enforcement law protest outside the state capitol building in Phoenix last April. Arizona officials recognize both the need for a new tone and the fact that such efforts could prove short-lived in a state where politics have grown more polarized in recent years. John Moore/Getty Images hide caption

Lobbyists and demonstrators seemed almost apologetic about going about their business this week at the Arizona state capitol here in Phoenix.

Organizers of one rally called for a moment of silence on Tuesday before speaking about spending cuts, while a group of Realtors -- in from Prescott to meet with their representatives -- made it their first order of business to add a wreath to the impromptu memorial for Democratic Rep. Gabrielle Giffords and other victims of the mass shooting in Tucson Saturday.

"We questioned whether we should come here," said Pete Weaver, one of the Realtors. "We decided that business as usual is the way it should be. We shouldn't let one individual impact the whole state."

Yet it's clear that that one individual, accused shooter Jared Loughner, has already had an impact on the entire state. People in Arizona are still in shock about Saturday's events, but there is already debate about whether there will be any lasting change to the state's political culture as a result.

When you mention a particular place, most people associate it with a single thing, whether it's a beautiful landmark or a horrific event.

People in Arizona are hoping they will not long be known, or judged, for the recent shootings. But some worry that the event will compound the public relations problem the state has had since passing a controversial law targeting illegal immigrants last April.

While emphasizing the state's fine qualities, such as its diversity and natural beauty, state Rep. Daniel Patterson worries that the damage to the state "through the perception that we discriminate" has been greater than any brought about by formal boycotts.

"I can remember when Arizona failed to pass the Martin Luther King holiday," he says. "I think it took us a decade to recover. I think we're in a similar situation now."

State Senate Majority Leader Scott Bundgaard is not alone in arguing that Arizona should not be "stigmatized" for the shootings, which could have taken place in any state. He notes that Utah has even looser gun control standards, and that the 2009 mass murder at Fort Hood hasn't hurt Texas' reputation as a place to do business.

"It's more the result of the fact that there are bad people in our society," he says of the Tucson shootings, "and sometimes our laws don't prevent them from doing bad things."

But the killings occurred just as Arizona had hoped to showcase itself in a more positive light, hosting Monday's college football championship bowl game in suburban Phoenix.

"It's harmful," says Mike Hellon, the former state GOP chair. "It's something we'll deal with for a long time."

As the legislative session got under way in the shadow of the shootings this week, politicians from Republican Gov. Jan Brewer on down consciously sought to address one another with a more sensitive tone. But Arizona officials also recognize that their new efforts at mutual respect could prove short-lived in a state where politics have grown more polarized -- and far more heated -- in recent years.

State Rep. Daniel Patterson, a Democrat whose district overlaps that of Giffords, says it's fine to disagree -- that's what politics is all about -- but that he hopes arguments never again rise to a level of personal attack.

Patterson includes himself in his indictment, saying he hopes to be more measured than he has sometimes been in the past.

"If we don't make some meaningful, permanent changes, it would be a big mistake," he says. "We have paid a very high price."

In Arizona, as in the nation as a whole, there has been a good deal of debate about whether the shootings were politically motivated and in some way influenced by heated partisan rhetoric, or simply the cruel act of a deranged individual.

"It's really important that the blame fall squarely on the shooter," says state Sen. Kyrsten Sinema, a Tucson Democrat and friend of Giffords.

"That being said, as political actors, we have to understand that our expressions of anger have effects on other people," Sinema says. "The left calls the right in Arizona 'Nazis' and 'bigots,' and the right calls the left 'traitors' and 'terrorists.' That has got to stop."

Even those who dispute the notion that the shooting grew out of political ferment say there's a need for politicians to be more careful about the words they use.

Mike Hellon, a former chairman of the Arizona Republican Party, says the shootings were a tragic event akin to other acts of mass violence, such as the 1999 shootings at Columbine High School, rather than something either triggered by "extreme rhetoric" or likely to have a lasting impact on politics in the state.

In the campaign here on the Republican side, they were talking about taking [Giffords] out. A rational person knows what that means, but you don't know how an irrational person will act.

Mike Hellon, a former chairman of the Arizona Republican Party

Still, he recognizes that there is a need for politicians to grow more circumspect. "In the campaign here [in Tucson] on the Republican side, they were talking about taking [Giffords] out," Hellon says. "A rational person knows what that means, but you don't know how an irrational person will act."

How Long A Pause?

No one at the capitol in Phoenix seems to expect that the shootings will lead to a policy shift. Greater protection of gun owners' rights, to allow rapid response to a future out-of-control shooter, seems more likely than any attempt at gun control. And it's not clear that the state will adopt funding for mental health as a renewed priority.

Still, Sen. Scott Bundgaard, the Republican majority leader, says the Legislature will spend less time this year on "divisive" issues than it has in the recent past. "The focus has to be on those bread-and-butter issues," he says. "We have a whole lot of work to reinvigorate the economy."

State Sen. Steve Gallardo, a Democrat, is skeptical. He recognizes that the tone of this legislative session in its early days has been much affected by the killings, and that the type of divisive legislation that the state has grappled with over the past couple of years has been shelved.

As political actors, we have to understand that our expressions of anger have effects on other people. The left calls the right in Arizona 'Nazis' and 'bigots,' and the right calls the left 'traitors' and 'terrorists.' That has got to stop.

A plan to challenge the birthright citizenship of children born to illegal immigrants was slated to be among the first items considered on the legislative agenda, for instance, but it has now been put on hold.

But Gallardo insists that this is just a temporary state of affairs. Just as the U.S. House has only temporarily delayed a vote on repealing last year's federal health care law, he says, in Arizona, "within the next month or so, a lot of the legislation that has created the ugliness will be back."

The fact is that partisan arguments are already shaping up around the shooting itself. Aside from the disagreement about whether the shooting was a politically motivated act, there has been ongoing debate about whether Pima County Sheriff Clarence Dupnik called it right or lacked good judgment in calling Arizona "the mecca for prejudice and bigotry" on Saturday.

Despite the earnest calls for a calmer tone and greater respect, it's hard to break old habits. Already, angry signs are popping up at rallies outside the capitol, such as one suggesting that spending cuts amount to "genocide."

"That's what a Guantanamo inmate looks like," yells Thomas Mario Costanzo to a woman passing by. Costanzo was there to protest the U.S. prison camp in Cuba. Standing a few feet from the impromptu memorial to the shooting victims, Costanzo pointed to a fellow demonstrator wearing a hood, standing in the crucifix position.

"The only thing people respond to is shock," he says. "It's unfortunate."

Still, Rep. Lela Alston, a Democrat who returned to the Legislature this week after a 16-year absence, says she is hopeful that the newfound spirit of agreeability, if not cooperation, will continue throughout the legislative session.

"Because of the nature of the budget shortfall, there will be disagreements, but I hope there will not be the problems with civility, as there have been in recent years," Alston says.

"You can violently disagree -- well, 'violently' is not a good word -- but you can seriously disagree and not be mean about it."