Accessibility links
Obama Calls On Americans To Talk In A Way That Heals The president asked for a collective "pause" as he paid tribute to the victims of the Tucson shootings during an emotionally riven ceremony attended by thousands of people. He urged Americans to change the nation's vitriolic public dialogue by "talking with each other in a way that heals, not a way that wounds."

Obama's Message In Grief: Talk In A Way That Heals

Obama's Message In Grief: Talk In A Way That Heals

President Obama paid tribute to the victims of the Tucson, Ariz., shootings Wednesday, urging Americans to change the nation's vitriolic public dialogue by "talking with each other in a way that heals, not a way that wounds."

Obama, speaking at a memorial service at the University of Arizona, somberly called for an end to the political recriminations that have ignited in the days since a gunman killed six people and injured 13 others, including U.S. Rep. Gabrielle Giffords (D-AZ). 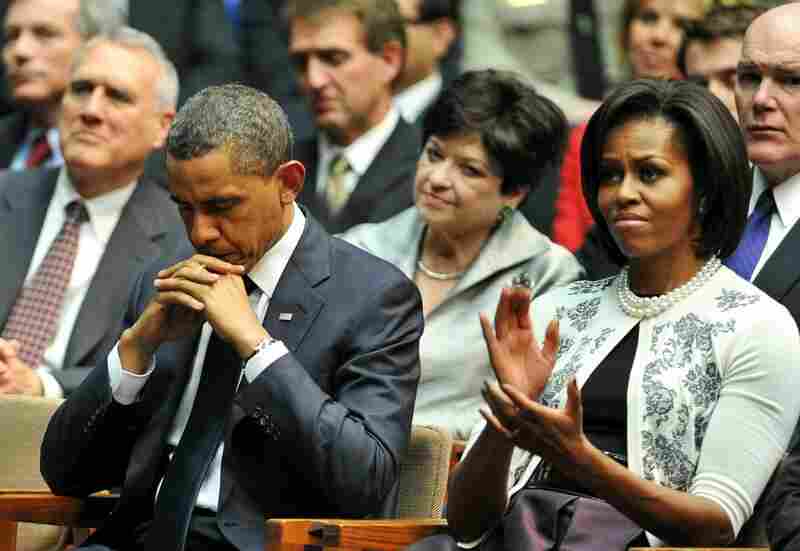 President Obama and first lady Michelle Obama during the memorial for the six people who were killed and 13 wounded in Saturday's shooting rampage in Tucson. Jewel Samad/AFP/Getty Images hide caption 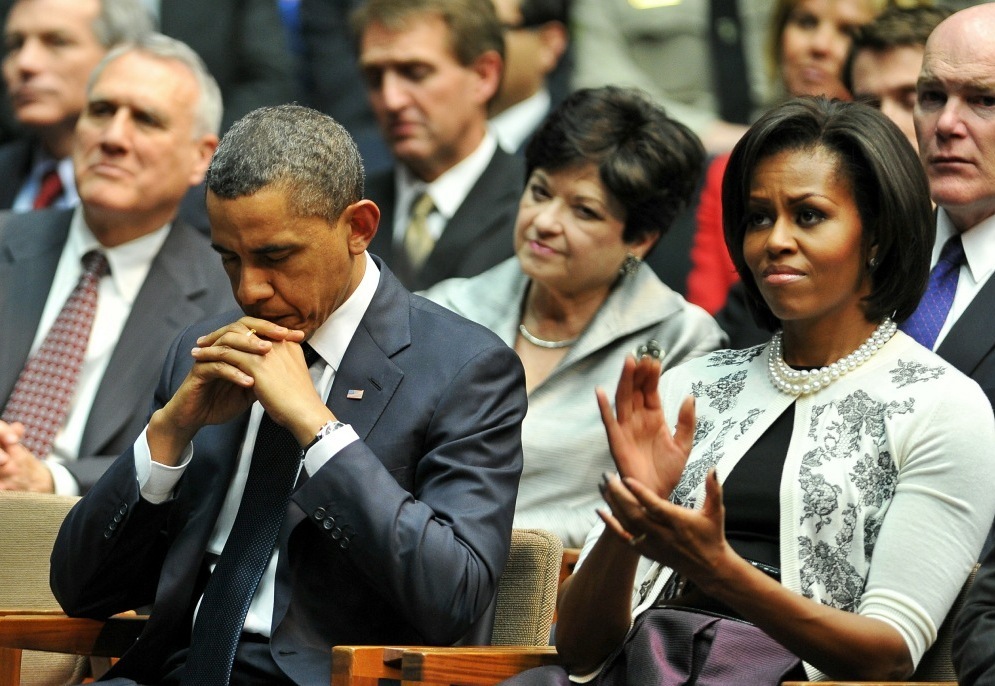 President Obama and first lady Michelle Obama during the memorial for the six people who were killed and 13 wounded in Saturday's shooting rampage in Tucson.

"Scripture tells us that there is evil in the world, and that terrible things happen for reasons that defy human understanding," Obama said. "Bad things happen, and we must guard against simple explanations in the aftermath."

Calling for a collective "pause," the president said, "None of us can know with any certainty what might have stopped those shots from being fired, or what thoughts lurked in the inner recesses of a violent man's mind."

The president had to balance a host of expectations, from comforting the victims' families to lifting the spirits of Arizonans traumatized by the violence and admittedly embarrassed by the way it reflects on their state.

Obama was met warmly by the estimated 14,300 packed into the university's arena. He brought them to their feet with a hopeful update of Giffords' condition.

Complete video: on The Two-Way.

Before the service, the president and his wife had visited the congresswoman, other shooting victims and their families at the University Medical Center. The Obamas spent nine minutes with Giffords in her room.

Diverting from his speech as written, Obama told the audience that moments after he and his wife left, Giffords opened her eyes and reached for her husband, NASA astronaut Mark Kelly. (Others in the room, including members of Congress, later confirmed the account.) The crowd erupted in screams and applause.

"She knows we are here," Obama said. "I can tell you she knows that we are rooting for her through what will be a difficult journey."

Separately, Giffords' doctors said Wednesday that she continued to show signs of recovery by making "spontaneous movements," such as feeling her wounds and adjusting her hospital gown. Doctors have reduced her level of sedation. But they declined to provide a broad prognosis, saying the next few days would be critical.

Earlier in the day, thousands of people stood in line outside the University of Arizona's McKale Center, where the service was held. By midafternoon, the arena was half full. Many in the audience wore black-and-white ribbons. By evening, the arena was packed, and an overflow crowd of 13,000 watched on the big screen at the nearby football stadium.

The Power Of A Simple Snapshot

Before the president spoke, the audience heard from Arizona Gov. Jan Brewer and former governor and current Homeland Security Secretary Janet Napolitano, among others. But a standout moment came when Daniel Hernandez Jr. took the stage.

Hernandez, a 20-year-old intern in Giffords' congressional office, tended to Giffords' wounds in the moments after she was shot through the head. "I humbly reject the use of the word 'hero' because I am not one," he said.

But later, Obama begged to differ, insisting, "You are a hero!"

The shootings have caused an already heated political climate to catch fire. Authorities say they have found no clear political motive for the shootings. But the fact that the alleged gunman apparently targeted Giffords — a moderate Democrat who stood out in conservative Arizona — has focused attention on whether today's political rhetoric has grown too inflammatory.

In reaction to the incident, gun control advocates and some Democrats in Congress have renewed their calls for tougher restrictions on assault weapons and ammunition. One Republican lawmaker is proposing legislation to ban civilians from carrying firearms within 1,000 feet of federal officials. And conservatives complain that liberals are overreacting and unfairly blaming them for creating a bitterly partisan political discourse.

But in the days before the shootings, public animosity toward Washington politicians seemed to be ebbing, if a newly released poll is any indication. The Associated Press-GFK survey found that 53 percent of Americans approve of how Obama is doing his job -- his highest rating in nearly a year. Back in November, just after the midterm elections — in which the Democrats were dealt huge losses in congressional and gubernatorial races — the same poll put Obama's job approval at 47 percent.

Respondents in the poll also expressed greater confidence in Congress, and 56 percent of them said they believe the newly Republican-led House can improve the economy.

Obama's aides said Wednesday's speech was a chance for the president to try to build on that -- and to emotionally connect with the victims, their families and the rest of America without fomenting division.

"The loss of these wonderful people should make every one of us strive to be better," Obama said. "If, as has been discussed in recent days, their death helps usher in more civility in our public discourse, let us remember it is not because a simple lack of civility caused this tragedy. It did not. But rather because only a more civil and honest public discourse can help us face up to the challenges of our nation in a way that would make them proud."