Accessibility links
A Memoir Of A 'Tiger Mother's' Quest For Perfection Battle Hymn of the Tiger Mother, by Amy Chua, discusses Chua's extreme parenting techniques. The book has become fodder for debate among parents across America. NPR's Michele Norris talks to Chua about the book, and to Chua's husband, Jed Rubenfeld. The two are professors of law at Yale Law School, and Rubenfeld has a forthcoming book of his own, The Death Instinct.

Battle Hymn of the Tiger Mother, by Amy Chua, discusses Chua's extreme parenting techniques. The book has become fodder for debate among parents across America. NPR's Michele Norris talks to Chua about the book, and to Chua's husband, Jed Rubenfeld. The two are professors of law at Yale Law School, and Rubenfeld has a forthcoming book of his own, The Death Instinct.

NORRIS: Thanks so much for having me, Michele.

NORRIS: Can you, in a few words, tell us what you were hoping to communicate with this book? What's the core message?

NORRIS: So the book is absolutely not a how-to book. I do not think the Chinese way is superior. It's a memoir. It's really a sort of - a story of my own journey and transformation as a mother, and it does explore these issues. You know, what's the right balance?

NORRIS: It's a journey that you're on. And you really do need to read the entire book, and not just the excerpt, because you do land in a very different place at the end of the book. But in the beginning of the book, you spell out some of the things that a Chinese mother believes. And if you don't mind, I'm just going to tick through a few of them because I do have...

NORRIS: ...the touch points for your life when you were growing up?

NORRIS: You know, I hope people see, Michele, that that is a little tongue in cheek. I mean, come on. I - the one thing I can say is, I know that my kids grew up knowing that they were deeply, deeply loved. And it was hard, it was hard, you know? And I'm actually really proud of the relationship that we have.

NORRIS: I so appreciated your honesty in this book because parenting is something that, you know, despite all the manuals and all the discussions about it in public forums, is something that happens behind closed doors. And you are incredibly candid. You really lay bare, you know, what these experiences were like for you. And you write about how you handled your daughter Lulu when she was 3. What happened on that day?

NORRIS: She looked at me - and she's 3 years old - and she steps outside into the cold. And I start to panic, you know? The whole book is full of Lulu calling my bluff. I didn't think she would go out there. So I quickly said, OK, you're quiet now, come back in here. And she just shook her head, and she wouldn't come in. I had to bribe her back in with hot chocolate and brownies but I - that's how I set up the book.

NORRIS: Jed, did you know what you were getting into when you struck this arrangement?

NORRIS: You know, to me - maybe I'm wrong - but I always thought the way we were raising our kids was more of a traditional American way - you know, the values of hard work and perseverance, and being taught that you can overcome obstacles, and respect.

A: It's not the parenting style in which I was raised. My family really did have the more permissive emphasis on individuality, creativity, freedom. And those are great values. And we tried to give our kids those values, too. But it's really true that my parents - and a lot of parents, I think, in that generation - didn't, you know, put expectations on kids. And I'm one of those people who sort of wishes that their parents had made them learn an instrument, or something like that.

NORRIS: Did you ever clash over this at all? Were there ever any concerns? And Jed, when I ask you this question, I'm thinking about a moment in the book where you noticed these marks on the piano, and you realize that your very driven daughter was actually gnawing on the piano when her parents weren't looking.

NORRIS: But those marks, whatever they indicated, and I - assuming they indicated frustration and, you know, something was hard to do. And things are hard to do for children, and kids will typically give up if the parents don't push them. What kid wants to practice a musical instrument so much that they really get good at it, you know? If the parent doesn't make them, it's probably not going to happen.

NORRIS: Amy writes that the measure of Chinese parenting is how the children, in the end, wind up viewing their own mother and father. And you use your own father as a cautionary tale in that sense. He was very resentful of his own parents and in fact, he was estranged from them because of their outsized expectations. This is a tough question to ask, but I'm wondering what your daughters think of you.

NORRIS: I mean, I guess I'm proud of the parent that I've been. I know I'm being judged very harshly by people out there. You know, that does hurt. But in the end, it's just how my daughters feel and think about me that matters. They are outgoing, strong-willed girls with lots of friends. And you know, I think my odds are good, but I don't know. It's a work in progress. I can only hope, you know? We can only try to do our best.

NORRIS: Amy and Jed, thank you so much for being with us. This has been wonderful.

NORRIS: Thanks so much for having us. 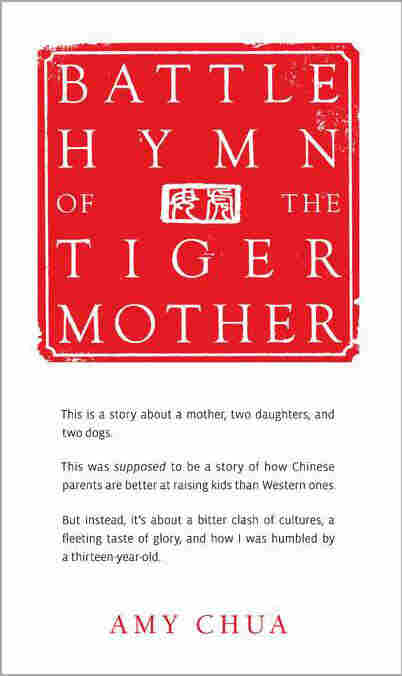 This is a story about a mother, two daughters, and two dogs. It's also about Mozart and Mendelssohn, the piano and the violin, and how we made it to Carnegie Hall.

This was supposed to be a story of how Chinese parents are better at raising kids than Western ones.

But instead, it's about a bitter clash of cultures, a fleeting taste of glory, and how I was humbled by a thirteen-year-old.

The Tiger, the living symbol of strength and power, generally inspires fear and respect.

A lot of people wonder how Chinese parents raise such stereotypically successful kids. They wonder what these parents do to produce so many math whizzes and music prodigies, what it's like inside the family, and whether they could do it too. Well, I can tell them, because I've done it. Here are some things my daughters, Sophia and Louisa, were never allowed to do:

I'm using the term "Chinese mother" loosely. I recently met a super-successful white guy from South Dakota (you've seen him on television), and after comparing notes we decided that his working-class father had definitely been a Chinese mother. I know some Korean, Indian, Jamaican, Irish, and Ghanaian parents who qualify too. Conversely, I know some mothers of Chinese heritage, almost always born in the West, who are notChinese mothers, by choice or otherwise.

All the same, even when Western parents think they're being strict, they usually don't come close to being Chinese mothers. For example, my Western friends who consider themselves strict make their children practice their instruments thirty minutes every day. An hour at most. For a Chinese mother, the first hour is the easy part. It's hours two and three that get tough.

Despite our squeamishness about cultural stereotypes, there are tons of studies out there showing marked and quantifiable differences between Chinese and Westerners when it comes to parenting. In one study of 50 Western American mothers and 48 Chinese immigrant mothers, almost 70% of the Western mothers said either that "stressing academic success is not good for children" or that "parents need to foster the idea that learning is fun." By contrast, roughly 0% of the Chinese mothers felt the same way. Instead, the vast majority of the Chinese mothers said that they believe their children can be "the best" students, that "academic achievement reflects successful parenting," and that if children did not excel at school then there was "a problem" and parents "were not doing their job." Other studies indicate that compared to Western parents, Chinese parents spend approximately ten times as long every day drilling academic activities with their children. By contrast, Western kids are more likely to participate in sports teams.

This brings me to my final point. Some might think that the American sports parent is an analog to the Chinese mother. This is so wrong. Unlike your typical Western over-scheduling soccer mom, the Chinese mother believes that (1) schoolwork always comes first; (2) an A-minus is a bad grade; (3) your children must be two years ahead of their classmates in math; (4) you must never compliment your children in public; (5) if your child ever disagrees with a teacher or coach, you must always take the side of the teacher or coach; (6) the only activities your children should be permitted to do are those in which they can eventually win a medal; and (7) that medal must be gold.

Excerpted from Battle Hymn of the Tiger Mother by Amy Chua. Copyright 2010 by Amy Chua. Excerpted by permission of The Penguin Press.