Accessibility links
Dr. Seuss Movie Musical 'The 5000 Fingers of Dr. T' Gets New 3-CD Soundtrack The beloved children's author made just one movie -- a surreal musical about a diabolical music master with a piano so gigantic he has to kidnap kids to play it. It was not a hit -- but as you might imagine, it has developed a wildly enthusiastic cult. 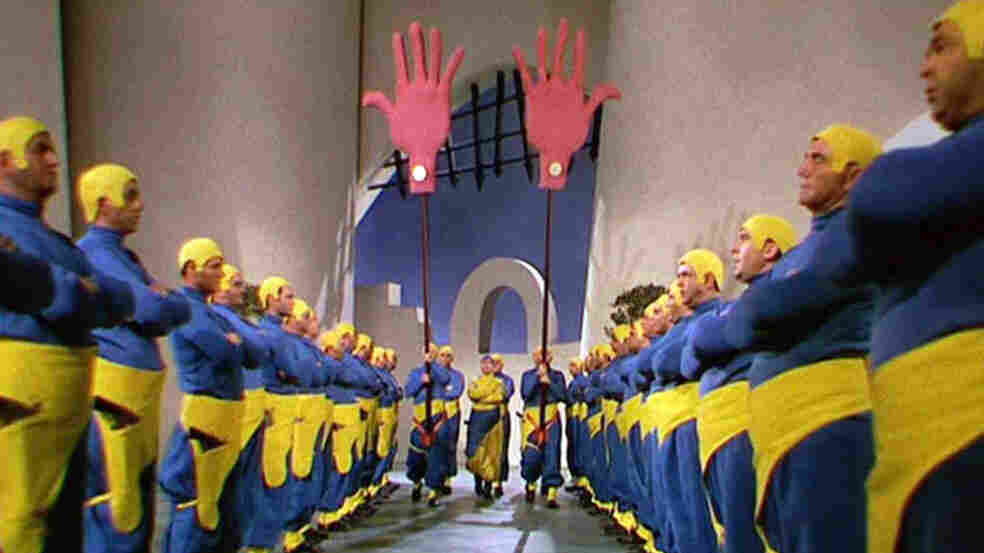 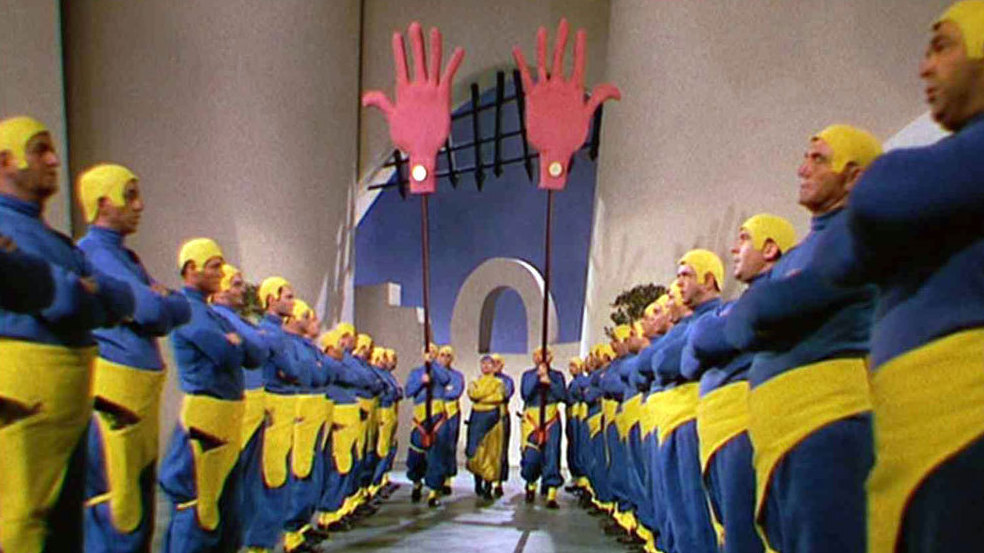 The surreal Terwilliker Institute, featuring a 5,000-key piano, is the backdrop of Seuss' zany cult classic.

Listen To The Songs

Not many people know about Dr. Seuss' only film, The 5000 Fingers of Dr. T. The 1953 movie musical was a flop, but thanks to special screenings and cable-TV airings, it's earned a small but devoted following.

Among them: singer Michael Feinstein, who's such a fan of the movie that he spent the past 30 years gathering every scrap of music ever recorded for it -- enough material to fill three CDs. And now, 57 years after its premiere, the definitive soundtrack of this kooky cult classic has finally been released.

The 5000 Fingers of Dr. T is a Technicolor fantasy -- mostly the extended dream sequence of a boy who doesn't want to practice the piano. He imagines a cockeyed castle where his teacher, transformed into the evil Dr. Terwilliker, has hypnotized his mother and taken 500 boys prisoner so they can play music on his 5,000-key piano.

"It's something that people discover and either love it and have this thing for it, or they just don't get it," Feinstein says.

He says the producers of the film wanted to create a significant children's musical fantasy -- a '50s homage to The Wizard of Oz, perhaps -- but that was no easy goal to achieve. At previews, the filmmakers realized that their movie was too dark for young audiences. 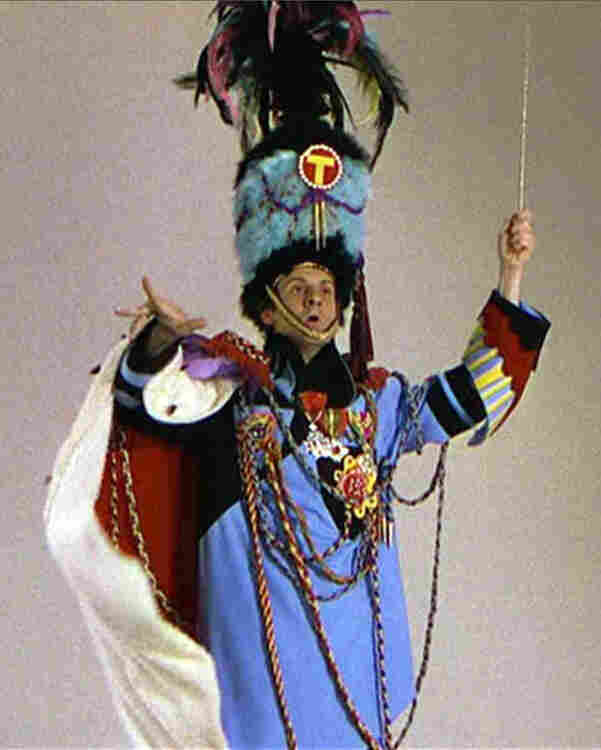 The madcap Dr. Terwilliker presides over a giant piano that must be played 24 hours a day. Columbia Pictures hide caption

"It scared the heck out of all the little kids!" says Feinstein.

And oh yes, it was ... ambitious: Seuss (who wrote the song lyrics) and composer Frederick Hollander had written 16 songs and two ballets for the show.

"They ended up cutting half the musical numbers," Feinstein says.

Mary Healy and Peter Lind Hayes, who were married in real life, starred as the hypnotized mother and the plumber who saves her. Actress Cathy Lind Hayes, their daughter, recalls her parents screening the film at home, and lamenting the excisions.

Alan Lareau, who's writing a biography on Hollander, says the German composer -- best known for The Blue Angel, with Marlene Dietrich -- is one of the most underappreciated Hollywood composers of the 1930s and 1940s. Out of the work that this prolific musician created for the film, Lareau says that the music for the film's "Shlim Shlam Ballet"  sequence really stands out.

Feinstein On 'The Dressing Song'

"The great highlight of the score is the dungeon ballet, where musicians who do not play the piano have been consigned," he says. "They burst out of the background in [the] moldy green tatters of their orchestral tuxedos and play us a totally surrealist ballet that's a montage of different styles, playing delightful Seussian instruments."

It was in this ballet sequence that George Chakiris, who became famous as Bernardo in the film West Side Story, made his Hollywood debut. It was a lucky break: Chakiris says producers wanted so many male dancers -- 60 of them -- that auditions were opened to men who were not in the Screen Extras Guild.

"So I auditioned, and I got the job and I made enough money to actually join the Guild, as well. So, it was a good thing!" he says.

While the movie helped to launch Chakiris' film career, it was the first and last film project for Seuss. After it flopped -- Lareau says Seuss referred to it as "a debaculous fiasco" -- he never wrote for the movies again. Seuss didn't even mention the movie in his memoir. 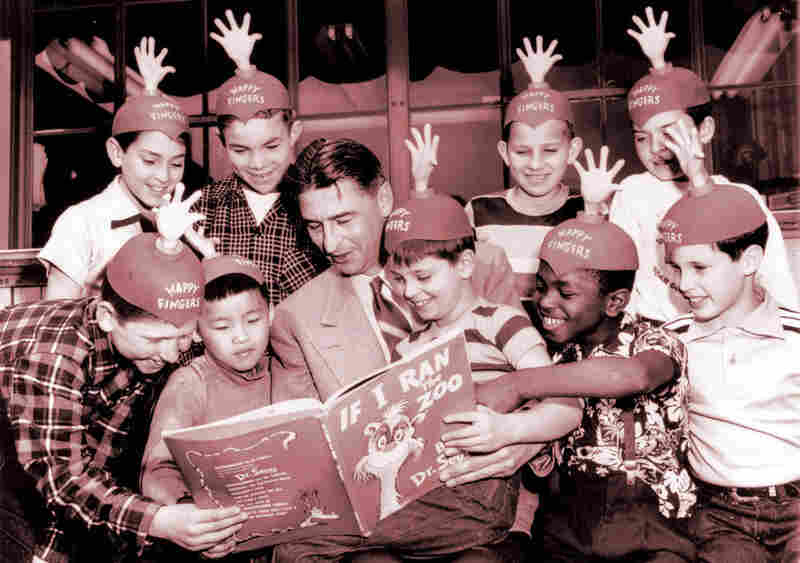 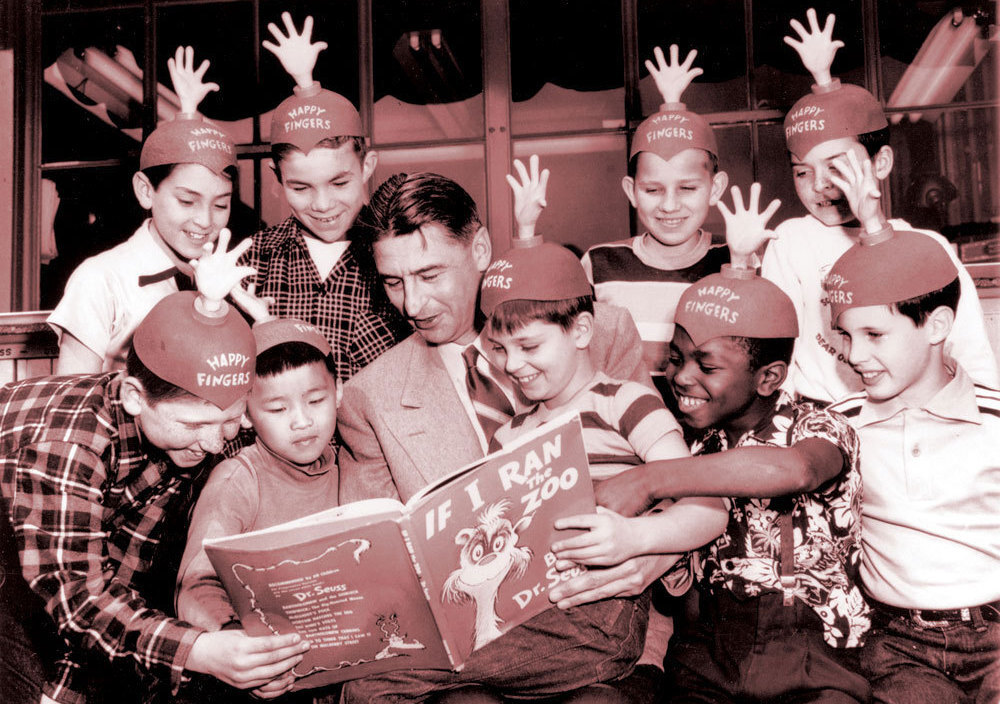 It's far from forgotten, though. Cathy Lind Hayes attended a screening in Pasadena, Calif., a few years ago, only to discover that the film had a devoted cult following.

"I mean, it was like Rocky Horror Picture Show -- they knew all the lines," she says. "And they were much, much younger than me. I thought, 'Well isn't this interesting?' This tiny little cult."

"This is the first official release of the music, and even though some of it doesn't sound terrific, a lot of it does; it will sound better than it has ever sounded before," Feinstein says. "It's a wonderful feeling after nearly three decades to see this thing in existence."