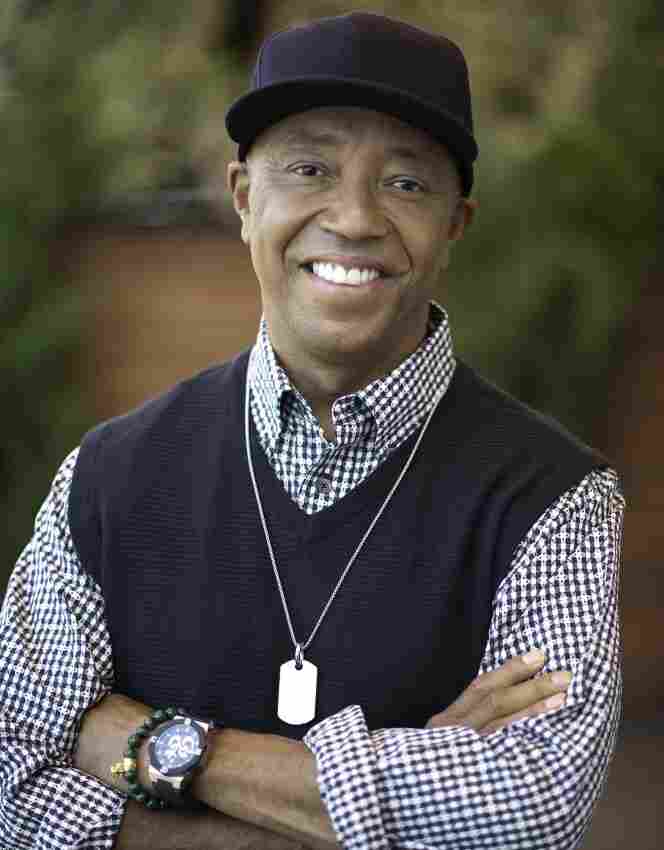 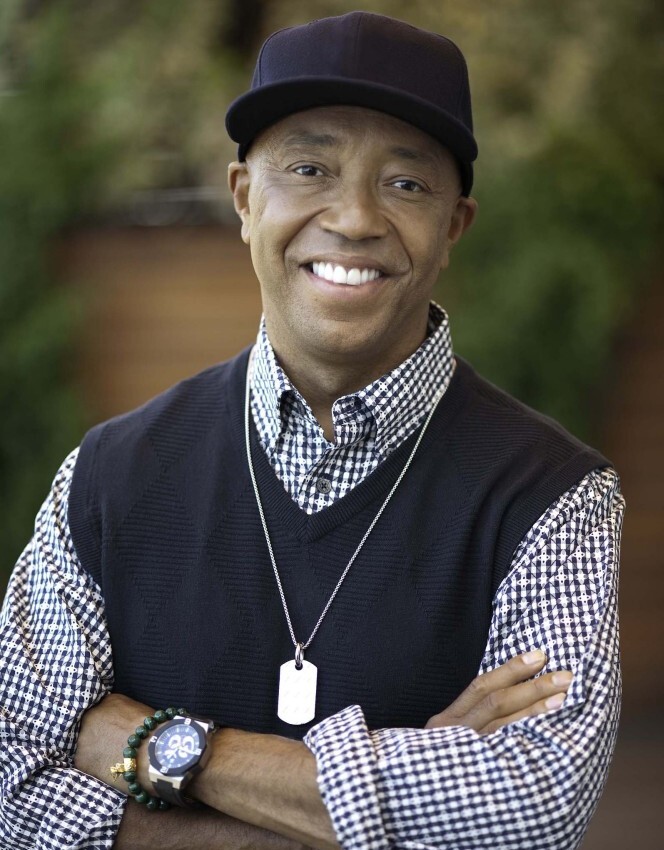 Russell Simmons -- co-founder of the Def Jam Recordings label and creator of the Phat Farm clothing line -- has some practical advice to share with the rest of us. "Happy can make you money, but money can't make you happy," he explains in his new book Super Rich: A Guide to Having it All.

And now, the game where we invite on people who've done big things and ask them little questions. Our guest today has influenced every facet of hip-hop culture. He launched rap and hip-hop stars with his label Def Jam Recordings. He launched comedians with Def Comedy Jam. He changed fashion with his label Phat Farm. By the time I finish this intro, he probably will have started a car company and built an amusement park. His new book is "Super Rich." Russell Simmons, welcome to WAIT WAIT...DON'T TELL ME!

SAGAL: Let's talk about the book. The book is called "Super Rich." And you are, as everybody knows, pretty wealthy from all your success in all your various things. But you say in the book that the rich you're talking about is not monetary wealth.

SIMMONS: No, not at all. I think when you're very dedicated to something and you're engaged fully, you become a giver. And the book is about learning to make people more productive or promoting to people that, you know, waking up and deciding on what you want to give is a great practice as opposed to waking up and deciding what you're going to get. That's where you really find your focus, or you tune out the noise and have some...

SAGAL: And you did business meetings.

SIMMONS: I still go there.

SAGAL: You used to do business meetings at the Russian baths in New York.

MAZ JOBRANI: Is that the one on 10th Street?

SAGAL: So you'd tell people to meet me down on 10th Street and you'd be sitting there inside the Russian baths in a sauna with a towel around and do business meetings?

SIMMONS: Yeah, that's not so odd. I've seen that in movies. That's like...

SAGAL: Well, usually in movies, the people I've seen in movies having meetings in the Russian baths are mobsters.

SIMMONS: Well, I used to fancy myself a bit of a mobster.

SAGAL: You started, I think not uncharitably, from nothing. You were a guy growing up in New York, in Queens was it?

SAGAL: And you ended up - I want to describe accurately the role you play in the world of hip-hop. You didn't invent it. You're not a singer or performer yourself, but you're kind of like the Bill Gates of hip-hop. You took it and made it available to everybody. Is that about right?

SIMMONS: Well, I was there, the company that started everybody from Jay-Z to Run DMC and L.L. I watched a lot happen. And I was very fortunate to be surrounded by a lot of very talented people.

SIMMONS: I produced Run DMC. I produced some early records, lots of records early on. But it was just the lack of - you know, we made records that didn't sound like anything else at the time.

SIMMONS: And I don't mean just because they rapped. I mean musically, I produced records that sounded dramatically different from what was on the radio.

SIMMONS: And I kind of knew the tone that needed to be set, and then the really creative guys came along and took over. But records like stuff MC I made or it's like that or Rockbox or Walk This Way. I made different sounding records.

SIMMONS: I don't think I have any good experiences of what people wanted what I was doing. I had that experience forever. (Inaudible) is the courage of Jamie Fox and Cedric and Bernie Mac and Chris Tucker. These guys were nowhere and HBO didn't want them. No one wanted a reverend and five A students on MTV. That was a weird thing.

SIMMONS: Well, my ex-wife has a show that just started again, her fifth season

SIMMONS: And my nieces had a reality show. So we've all had shows, and we've all been on each other's shows many times. We kind of, you know, just cheer each other on. I don't think there's a competitive bone in any of our bodies in that regard.

SAGAL: It saves time. Instead of calling up your relatives to see how they're doing, you just turn on the Oxygen network and watch their show I guess.

SAGAL: Well, we are delighted to have you with us today, Russell Simmons. And we have invited you here not just to talk but also to play a game.

SAGAL: Today, we are calling this game?

SAGAL: Now, since you are an important cultural figure who has the wellbeing of America as his goal, we thought we'd ask you about another such person, weight loss guru, Richard Simmons.

SIMMONS: I've told you how many times that I've been called Richard Simmons...

SAGAL: You guys get mistaken for each other?

SIMMONS: I get that all the time.

SIMMONS: And I've never met. It's amazing as many as I've been called his name. But I wondered if he's ever been called my name.

JOBRANI: You guys should do a reality show together.

SAGAL: Well, if you answer two out of three questions correctly about Richard Simmons, you'll win a prize for one of our listeners, Carl's voice on their home answering machine. Korva, who is Russell Simmons playing for?

SAGAL: Now, I just want to point out that when your brother, Rev Run, was on the show, he got zero for three.

SAGAL: Just laying that down as a marker.

SAGAL: Ready to try this?

SIMMONS: Well, it had to be number two. I think B.

SAGAL: You think the salad spray? You're a businessman...

SIMMONS: Yeah, I'm right about that one?

SAGAL: You are. You are absolutely right about that.

SIMMONS: By the way, that was so simple, anybody could figure that out. Give me the next one.

SAGAL: All right. The idea was that, you know, you could spray your salad rather than douse it in oil. Did you ever, yourself, get into food products? That seems like - is that a business you've gotten into amongst your many?

SIMMONS: No, I have not. But I am on a green juice fad, so I haven't had any solid food since January 1st.

SAGAL: Since January 1st? How do you feel?

SIMMONS: Yeah. I'm in a restaurant now with a green juice watching everybody eat.

SAGAL: Is that tough sometimes?

SIMMONS: Yeah, it's happens relative. What's the next question? Let me...

SIMMONS: I think so.

SAGAL: It's actually Jake the Undertaker.

SAGAL: It is. Apparently, Simmons has created dolls representing this family in a small town. There's Norman, Norman's unmarried sister Miss Bea, and Aunt Della Mae, as well as bother Jake, the Undertaker.

SAGAL: You can do this.

SIMMONS: And 65 was passing when I went to school.

SIMMONS: Give me one more shot.

SAGAL: Two out of three wins on this game, so you can still do it.

DICKINSON: Thank God, you're not competitive, because that could be a problem.

SAGAL: Yeah. All right, here we go. Richard Simmons has dabbled in acting, including which of these roles? A: The Spirit of Christmas Yet to Come in a stage version of "A Christmas Carol." B: Assassin number two in the 80s action movie, "Blue Steel." C: an obese extra in Fellini's Satyricon.

SIMMONS: I would guess A.

SAGAL: I don't know about A.

SAGAL: I mean, the Spirit of Christmas Yet to Come, he's a sinister figure, he never speaks, he's very still. It's hard to imagine Richard Simmons in that. I'm just saying.

SIMMONS: I'm happy with A.

SAGAL: You're going to go with A even though I suggested that's probably not the right choice. You're just going to do it?

SAGAL: You know, who am I to gainsay Russell Simmons, I want that to be true. But no, actually the answer is C, an obese extra in Fellini's Satyricon.

SAGAL: Yeah. The story is that Simmons was quite obese back in the 60s and he went to Rome as a student and was picked as an extra for the famous film about ancient Roman excess. Korva, how did Russell Simmons do on our quiz?

COLEMAN: Well, Peter, Russell got one out of three answers correct. He did not win the prize for Michelle-Shari Kruss.

SAGAL: But you did get one more than your brother, which I'm sure is important the next time you see him.

SIMMONS: I got one more than my brother. Okay, so I wasn't competitive, just with him.

SAGAL: Right. I understand. I've got to ask you something. You've done so many things, has anybody ever come to you with an idea that you said no, that's too - I'm not going to do that. That's the dumbest idea I've ever heard?

SIMMONS: I don't know, four or five times a day.

SAGAL: Russell Simmons is the founder of Def Jam Records and the author of the book, "Super Rich."

SAGAL: Russell Simmons, thank you so much for being with us.

SIMMONS: Thank you for having me on your show.