Accessibility links
Experts: Gun Background Checks Have Big Gaps The FBI database that gun sellers use to run background checks on would-be buyers is only as good as the records that states put into it. Several studies and experts say those records are often incomplete or missing. 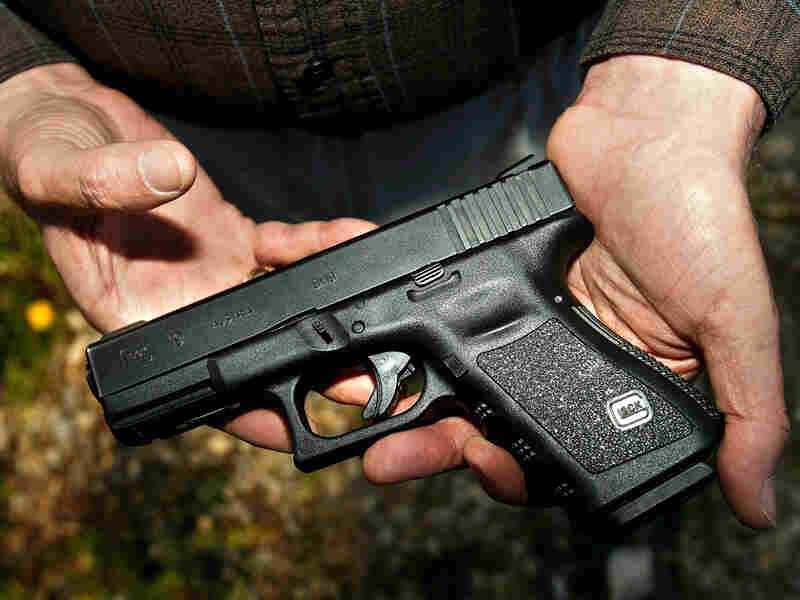 A file photo of a Glock 19, the type of weapon that authorities say was used in the Jan. 8 shootings in Tucson. Chip Somodevilla/AP hide caption

When Jared Loughner walked into the Tucson gun store where authorities allege he put down his money for a Glock 19 in November, the store owner sent a request to run Loughner's name through the FBI's database of criminals, fugitives, illegal immigrants and mentally ill to see if Loughner was among them.

Loughner had had several run-ins with police for possessing drugs and had been told to leave his community college for erratic behavior. But the arrests never became convictions, and his behavior was never evaluated by state mental health professionals. So like 10 million others across the U.S. last year, Loughner passed and got his gun.

Despite the outcome, it's not people like Jared Loughner -- people who may have questionable but not criminal backgrounds -- that have gun control advocates worried. It's the database itself, which is only as good as the records that states put into it.

Several studies and experts say those records are often incomplete or missing.

"The [background check system] is gigantically better than nothing, and it is helping to keep people who are not supposed to have guns from getting guns," said Matt Bennett, spokesman of the nonprofit group Third Way, formerly known as Americans for Gun Safety. "But it has very significant holes that are problematic."

The database is a 13-year-old system called NICS -- the National Instant Criminal Background Check System. It pulls records from not only state and local police, but also dozens of other agencies, including the U.S. Park Police, campus police and the U.S. Border Patrol. Except for a few additional restrictions in some states, as long as you're 21 and not in it, you can buy a handgun. If you're 18, you can buy a long gun.

But according to the FBI and a 2005 study from the Bureau of Justice Statistics, a significant problem is the number of states that are slow or fail entirely to update the final outcome of court cases. For example, the database may include the arrest record of someone charged with murder, but it may not know whether that person was convicted if the state court did not provide that information.

"If there's an open warrant for someone's arrest, the database is usually correct," said Robert McCrie, professor of security management at the John Jay College of Criminal Justice. "Where it is not correct is in the disposition of cases -- if the charges are later dismissed or the case is continued. That's not very reliable, and that's a problem."

"Many counties and states don't see it as their duty to put substantial information into the system," McCrie said.

Digging Through Records -- With A Time Limit

McCrie and other experts say that leaves it up to database researchers to figure out what happened. In some states, researchers have to track the information down at the specific courthouse where the trial occurred, calling a busy clerk's office to ask someone to manually pull the file. Some records are in storage in warehouses or basements.

And according to the law, the researcher has only three days to do it. If the FBI cannot determine whether someone is permitted to buy a gun in three days, in most states the dealer is allowed to proceed with the sale. It's called a "default proceed."

In 2005, the latest figures available, the Justice Department determined that more than 3,000 people walked out of a gun store with a firearm that they should not have been able to buy, because records later revealed they were felons or otherwise prohibited from owning a gun.

At that point, it's up to the Bureau of Alcohol, Tobacco, Firearm and Explosives to get the gun back.

"Imagine you're law enforcement and you're sent to retrieve the firearm from the felon who bought it or the domestic violence offender," said Becca Knox, director of research for the Brady Campaign to Prevent Gun Violence. "Not exactly the situation we want to put our law enforcement officers in."

Some of the biggest challenges for the database, experts say, are domestic violence and drug cases, which often have inconclusive ends. Defendants are sometimes given a year or two to attend treatment, complete community service or enter therapy before a court decides whether a conviction will stand. An arrest is not enough to prohibit someone from buying a gun.

According to the Justice Department, some states are still entering those records manually. In states where records are fully automated, a clerk in a courtroom can punch the information into the database. Other states pass a handwritten piece of paper from one office to the next before it gets entered -- a delay that can be costly for victims of domestic violence who have requested immediate restraining orders.

"You can see there's uneven performance," Knox said. "The database is an incredible step forward, but we still have to figure out where the administrative and financial roadblocks are."

In 2009, the FBI ran 10.8 million background checks on potential gun buyers. About 150,000 people were rejected. Most had felony or domestic violence convictions, or a restraining order, on their records. Less than 2 percent were rejected because of a mental illness.