Accessibility links
Eisenhower's Military-Industry Complex Warning, 50 Years Later On Jan. 17, 1961, President Dwight Eisenhower gave the nation a dire warning about what he described as a threat to democratic government. He called it the military-industrial complex, a formidable union of defense contractors and the armed forces. 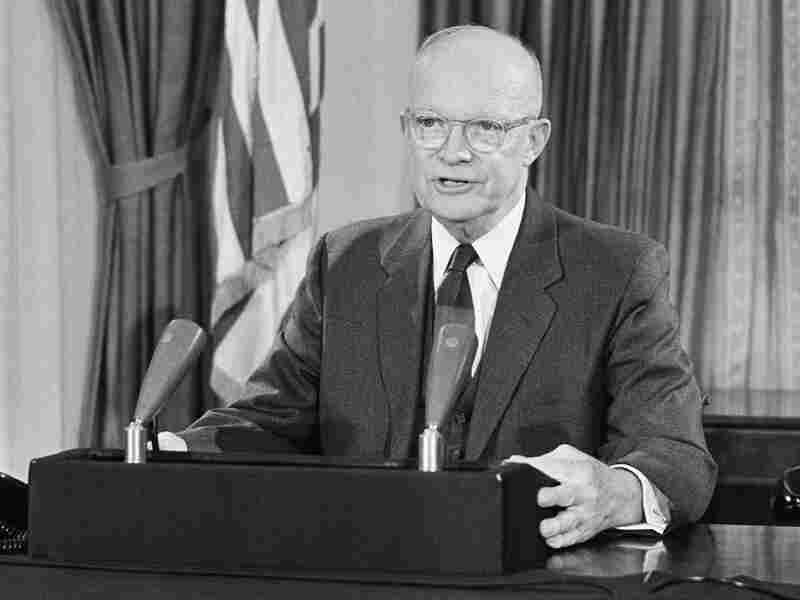 In his final speech from the White House, President Dwight D. Eisenhower warned that an arms race would take resources from other areas -- such as building schools and hospitals. Bill Allen/AP hide caption 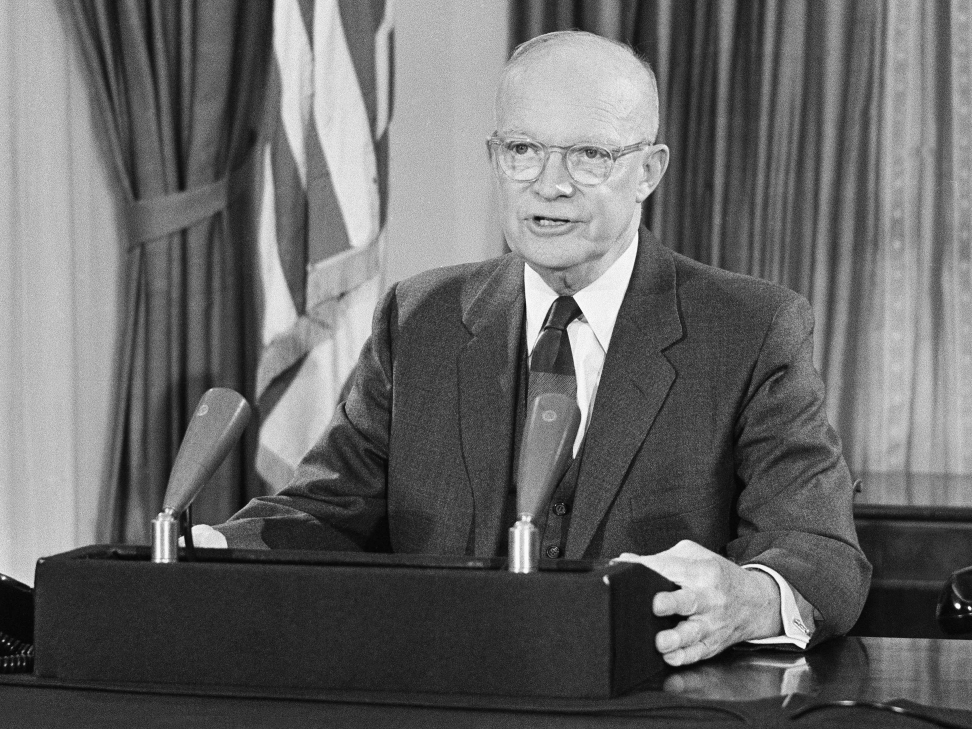 In his final speech from the White House, President Dwight D. Eisenhower warned that an arms race would take resources from other areas -- such as building schools and hospitals.

On Jan. 17, 1961, President Dwight Eisenhower gave the nation a dire warning about what he described as a threat to democratic government. He called it the military-industrial complex, a formidable union of defense contractors and the armed forces.

Eisenhower, a retired five-star Army general, the man who led the allies on D-Day, made the remarks in his farewell speech from the White House.

As NPR's Tom Bowman tells Morning Edition co-host Renee Montagne, Eisenhower used the speech to warn about "the immense military establishment" that had joined with "a large arms industry."

"In the councils of government, we must guard against the acquisition of unwarranted influence, whether sought or unsought, by the military-industrial complex. The potential for the disastrous rise of misplaced power exists, and will persist."

Since then, the phrase has become a rallying cry for opponents of military expansion.

Eisenhower gave the address after completing two terms in office; it was just days before the new president, John F. Kennedy, would be sworn in.

Eisenhower was worried about the costs of an arms race with the Soviet Union, and the resources it would take from other areas -- such as building hospitals and schools.

Bowman says that in the speech, Eisenhower also spoke as someone who had seen the horror and lingering sadness of war, saying that "we must learn how to compose differences not with arms, but with intellect and decent purpose."

Another concern, Bowman says, was the possibility that as the military and the arms industry gained power, they would be a threat to democracy, with civilians losing control of the military-industrial complex.

In his remarks, Eisenhower also explained how the situation had developed:

"Until the latest of our world conflicts, the United States had no armaments industry. American makers of ploughshares could, with time and as required, make swords as well. But we can no longer risk emergency improvisation of national defense; we have been compelled to create a permanent armaments industry of vast proportions."

The difference, Bowman says, is that before the late 1950s, companies such as Ford built everything from jeeps to bombers -- then went back to building cars. But that changed after the Korean War.

Bowman says that it's important to note that during the Cold War, the U.S. military didn't draw down its troops like it did after World War II.

"It kept a large standing army after the Korean War," he says.

America's new reliance on sophisticated weapons technology also helped bring about what Bowman calls "a technology race with the Soviets."

And that meant that weapons manufacturing became more specialized.

"So [for] a company like Ford, going from cars to jeeps is one thing; cars to missiles is quite another," Bowman says.

In an effort to control the expansion of the military-industrial complex, Eisenhower consistently sought to cut the Pentagon's budget.

The former general wanted a budget the country could afford, Bowman says. He upset all the military services with his budget cuts, especially the Air Force.

Citing another quote from Eisenhower -- this one from another speech on military spending -- Bowman says, "The jet plane that roars overhead costs three quarters of a million dollars. That’s more than a man will make in his lifetime. What world can afford this kind of thing for long?"

In today's government, Eisenhower has a fan in his fellow Kansan Secretary of Defense Robert Gates -- who keeps a portrait of the former general in his office at the Pentagon, Bowman says.

"Does the number of warships we have, and are building, really put America at risk, when the U.S. battle fleet is larger than the next 13 navies combined -- 11 of which are our partners and allies?

Is it a dire threat that by 2020, the United States will have only 20 times more advanced stealth fighters than China?

But, Bowman says, it has only become more difficult to control the size of the nation's military industry.

First, "there are only a handful of defense giants," he says, "which means you can't shop around for a better price."

And companies such as Lockheed Martin and Northrop Grumman are also adept at both lobbying and marketing to promote their interests.

Bowman says, "they also spread the jobs around the country, to lock in political support."

Gates has also discussed the difficulty of cutting military spending:

"What it takes is the political will and willingness, as Eisenhower possessed, to make hard choices -- choices that will displease powerful people both inside the Pentagon, and out."

Bowman says that some industry observers believe that "the one thing that could create that political will is the nation's huge deficit." Only that might force cuts in the overall defense budget.