Accessibility links
Foreign Policy: Breaking Up (Countries) Is Good To Do With most expecting southern Sudan to secede from the north this year, Parag Khanna of Foreign Policy takes a look at other country births -- and possible future states -- and argues why the post-colonial trend of state independence is inevitable and necessary.

Foreign Policy: Breaking Up (Countries) Is Good To Do

Foreign Policy: Breaking Up (Countries) Is Good To Do 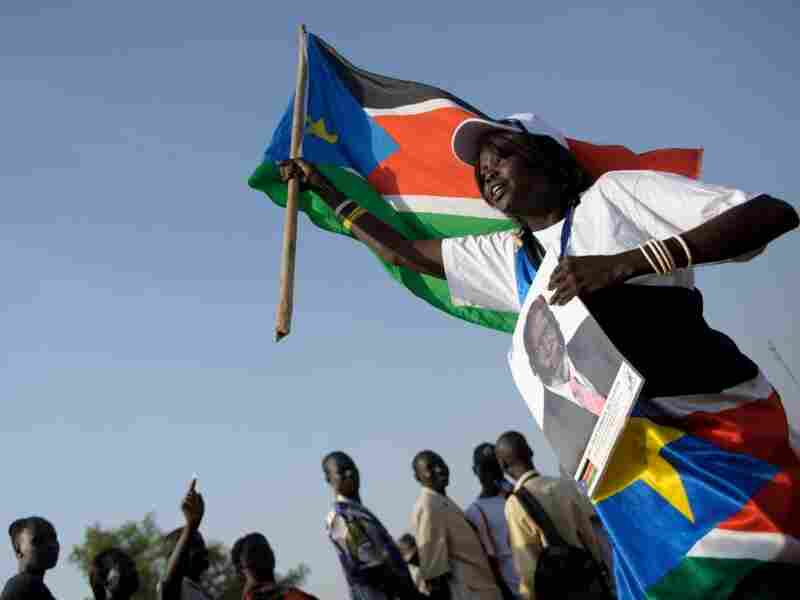 A voter, wrapped in a southern Sudanese flag, waives another local flag outside a polling station in Juba on January 9, 2011 on the first day of a week-long independence referendum expected to lead to the partition of Africa's largest nation and the creation of the world's 193rd UN member state. AFP/PHIL MOORE/AFP/Getty Images hide caption

Parag Khanna is a senior research fellow at the New America Foundation and author of the forthcoming book, How to Run the World: Charting a Course to the Next Renaissance.

This year will almost certainly see the birth of a new country named Southern Sudan. It might also witness the creation of an independent Palestine, as Palestinian leaders push for unilateral recognition of their national sovereignty within their country's 1967 borders. And within a couple of years, a sovereign Kurdistan might emerge from a still-brittle Iraq. We could be entering a new period of mass state birth: Imagine an independent South Ossetia, Somaliland, and Darfur too. The trend is nothing new, but it's picking up steam again. The most recent sovereign entrant was in 2008, when Kosovo emerged from the breakup of Yugoslavia; nine years earlier, in 1999, it was East Timor gaining independence from Indonesia.

Because of this wave of self-determination culminating in sovereignty, there are today more autonomous political units in the world than at any time since the Middle Ages of a millennium ago. Within a few decades, we could easily have 300 states in the world. Moreover, we are gradually returning to the medieval world of thousands of multilayered communities ranging from the supranational European Union to the magnetic city-states of the Persian Gulf to the indigenous communities of the Inuit of Canada and Greenland.

This instability is the cartographic expression of an underlying geopolitical phenomenon afflicting much of Africa, the Middle East, and Asia: post-colonial entropy. Except for a few, rare cases, many of the colonies that gained their independence a half-century ago have since experienced unmanageable population growth, predatory and corrupt dictatorship, crumbling infrastructure and institutions, and ethnic or sectarian polarization.

Whether or not Yemen, Iraq, Pakistan, or the Democratic Republic of the Congo technically qualify as "failed states," their fates are sealed by their colonial inheritance. Indeed, it's often their borders that are the deepest cause of their conflicts. Many of these national borders are in desperate need of adjustment, and the rest of the world should show more flexibility in allowing them to do so. Europe messed it up the first time, but now the West can support the right regional bodies to adjudicate these new borders -- helping others help themselves in the process.

By this logic, today's hot spots such as Iraq and Afghanistan are not simply "America's Wars." Rather, they are to some extent the unexploded ordinance left over from old European wars, with their fuses lit on slow release. Indeed, the United States had nothing to do with the Sykes-Picot and other agreements that parceled the Levant into French- and British-allied monarchies, or the Congress of Berlin, which drew suspiciously straight lines on Africa's map. Some of these haphazard agreements created oversized or artificial agglomerations like Sudan, which threw together heretofore independent groups of Arabs, Africans, Christians, and Muslims into a country one-fourth the size of the United States but lacking any common national ethos or adequate distribution of resources to sustain commitment to unity. Others did the opposite, like the British officer Henry Mortimer Durand, whose infamous line divided the Pashtun nation between Afghanistan and Pakistan.

This growing cartographic stress is not just America's challenge. All the world's influential powers and diplomats should seize a new moral high ground by agreeing to prudently apply in such cases Woodrow Wilson's support for self-determination of peoples. This would be a marked improvement over today's ad hoc system of backing disreputable allies, assembling unworkable coalitions, or simply hoping for tidy dissolutions. Reasserting the principle of self-determination would allow for the sort of true statesmanship lacking on today's global stage.

In Sudan, the United States has certainly placed itself on the right side of this trend. It has been a key architect of the internationally sanctioned referendum that will likely result in Southern Sudan's independence, making clear that the eventual split is not a U.S.-led conspiracy to hack apart the Arab-Muslim world. Such a legitimate process has given cover to China to reorient its policy as well, balancing its staunch support for the regime of Omar Hassan al-Bashir in Khartoum with upgraded relations with the Southern government in Juba, which has in return promised to honor the China National Petroleum Corp.'s contracts. (Sixty percent of Sudan's oil exports currently go to China.)

But there is more to ushering new nations into existence than preventing neighboring antagonists from invading one another (as fundamentally important as that is). All three of the world's current quasi-states -- Southern Sudan, Palestine, and Kurdistan -- will be effectively landlocked and vulnerable unless they are provided with viable infrastructure to connect to external markets. In addition to the existing Sudanese north-south pipelines, Southern Sudan needs a new pipeline across Kenya to the Indian Ocean to export oil through additional routes. Likewise, Kurdistan needs pipelines via Turkey and Syria to Europe and the Mediterranean Sea, and Palestine needs the Rand Corp.'s proposed "Arc" of road and rail corridors to link the West Bank and Gaza into an integrated unit. These linkages to the outside world are insurance policies against dependence on and domination by neighbors, whether Sudan, Iraq and Turkey, or Israel, respectively. While the White House remains obsessed with "security guarantees" for Israel that rest on empty or short-lived gestures of goodwill, it is infrastructure, rather, that is the prerequisite to peaceful coexistence. Nation-building is as much physical as institutional; independence without infrastructure is impossible.

The entropy afflicting the post-colonial world will not stop anytime soon. States like Congo, Nigeria, and Pakistan, which are internally diffuse and often intentionally unevenly developed, will soon be too large to manage themselves. It is less likely that they will gather the competence, capacity, and will to become equitable modern states than that they will continue to inspire resistance to the legacies of centralized misrule.

The coming partitions must be performed with a combination of scalpel and ax, soft and hard power. Above all, the world must recognize that these partitions are inevitable. Our reflex is to fear changes on the map out of concern for violence or having to learn the names of new countries. But in an age when any group can acquire the tools of violent resistance, the only alternative to self-determination is perpetual conflict. After genocidal campaigns such as Saddam Hussein's gassing of the Kurds and Serbia's brutal repression of the Kosovars, it is impossible to imagine those groups again living under one government. Rather than delay, the emphasis should be on diplomatic efficiency: Speedy partitions can lead to more amicable outcomes, such as the "velvet divorce" between the Czech Republic and Slovakia in 1993. Both are now members of the European Union, within which they respect one another's borders even as such borders have largely become irrelevant.

Finally, we must be weary of status quo conservatism motivated by selfish concerns. Russia and China staunchly opposed Kosovo's independence for the sake of their own quasi-imperial possessions, but did a sovereign government in Pristina really undermine Russia's ironclad rule over Chechnya or China's grip on Tibet?

Each territorial conflict has a particular mix of historical, geographic, and diplomatic conditions that will breed unique solutions. But one thing is certain: The way to create a peaceful and borderless world is, ironically, by allowing ever more nations to define themselves and their borders. Then, and only then, will they seek openness and integration with the rest of the world. Breakups are sometimes the path to better friendships.