Accessibility links
U.S., China Leaders To Focus On Economic Frictions The relationship between China and the U.S. seems to grow more complicated every day, whether the issue is China's growing military might or how to handle North Korea. But economic issues, like the value of China's currency, are also likely to find a place on the U.S. and Chinese leaders' agenda. 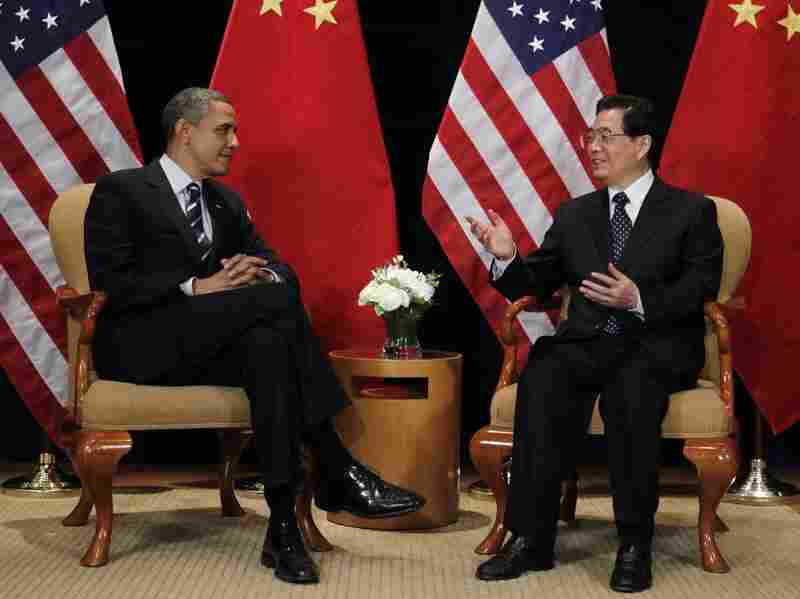 President Obama meets with China's President Hu Jintao on the sidelines of the G-20 summit in Seoul, South Korea, in November. The Chinese leader comes to Washington this week. Charles Dharapak/AP hide caption 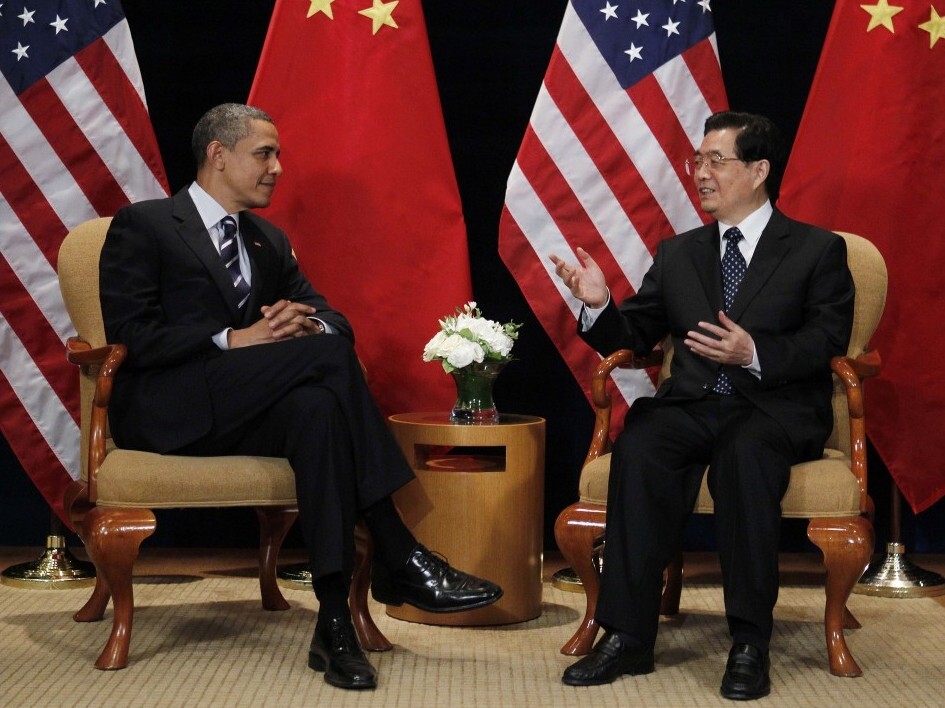 President Obama meets with China's President Hu Jintao on the sidelines of the G-20 summit in Seoul, South Korea, in November. The Chinese leader comes to Washington this week.

The relationship between China and the U.S. seems to grow more complicated every day, whether the issue is China's growing military might or how to handle North Korea. But there are prickly and persistent economic issues the two leaders will have to navigate, too.

With U.S.-China security issues in the headlines recently, some analysts have predicted that economic issues will take a back seat at this week's Washington summit between Chinese President Hu Jintao and President Obama. China specialist Nicholas Lardy of the Peterson Institute for International Economics is not one of them.

"When we remain in a position of fragile, sluggish domestic growth, and unemployment above 9 percent, it's almost inevitable the economic issues are going to be very, very high on the agenda," he says -- including the long-running U.S. concern that China is artificially suppressing the value of its currency, the yuan, to make its exports more attractive overseas. That makes it harder for the U.S. and other countries to compete. In a speech last week, Treasury Secretary Timothy Geithner said that has to change.

"We believe it's in China's interest to allow the currency to appreciate more rapidly in response to market forces," he said. "And we believe China will do so, because the alternative would be too costly both for China and for China's relations with the rest of the world."

The other big issue, Geithner said, is the theft of U.S. intellectual property, from software to movies, by Chinese businesses.

Myron Brilliant of the U.S. Chamber of Commerce agrees. "We need to see more robust efforts on the enforcement side, more protection of patents from foreigners and more support generally in how we deal with intellectual property issues in the marketplace," he says.

Geithner suggested that if China agreed to solve the currency and intellectual property issues, the U.S. could accommodate some of China's priorities, including greater access to U.S. high-tech products and more opportunities to invest in the United States.

"We are willing to make progress on these issues," Geithner said. "But it's important to recognize that our ability to do so will, of course, depend on how much progress we see from China."

But a grand bargain is not likely at this summit, Lardy says. One reason, he says, is that China's leaders worry that if the yuan appreciates too fast it could hurt the country's exports and cause domestic unrest.

"The export sector employs tens of millions of people, and they fear if they allow too rapid appreciation, they'll get significantly higher unemployment, that workers will be out in the street," Lardy says.

And China's leaders can't risk that kind of instability.

But there is an indirect force that could raise the cost of China's exports and make U.S. goods more competitive: inflation.

Right now, China is experiencing a bout of rapid inflation, and that could have the same economic impact as a government-engineered hike in the value of the yuan. But Arthur Kroeber, who edits China Economic Quarterly in Beijing, says the inflation solution might not be enough to satisfy American politicians.

"The problem is a political one, which is that people in Congress want to see the exchange rate rise, and they won't be happy if the exchange rate doesn't rise, but you get the same effect through an increase in inflation," he says.

A major deal on intellectual property issues also appears unlikely, though incremental progress was made last month when the Chinese government agreed to make sure that at least the software used in government offices is not pirated.

Lardy of the Peterson Institute says solving specific highly technical issues like those surrounding intellectual property is not the role of summits between presidents.

Kroeber agrees. "I think the question about the summit is not will it achieve this or that specific goal, but will it create a tone, a positive tone, for the relationship," he says.

If Obama and Hu succeed in that, it makes it much more likely that the two countries' negotiators will make progress in the future on specific issues. Kroeber says that will improve a relationship between the countries that is already broad and deep, despite the waves of disagreement that often roil the surface.