Accessibility links
The New Republic: How Government Boosts Health Critics of the Affordable Care Act worry that it's too much of a government takeover, with one specific group of people writing the rules for what insurance carriers can and can't do. Jonathan Cohn of The New Republic acknowledges those fears, but argues that government regulation of health care is necessary. 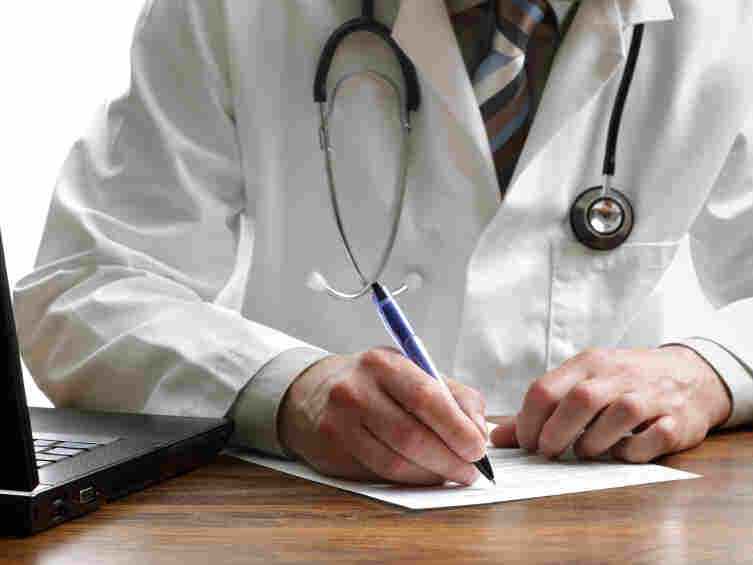 As the debate in the House begins over health care reform, some critics worry that the Affordable Care Act is a government takeover of health care. iStockphoto hide caption

Jonathan Cohn is a senior editor at The New Republic and a senior fellow at Demos.

As the House begins its debate on whether to repeal the Affordable Care Act, you're going to hear a lot about how it's a "government takeover" of health care and how it means Kathleen Sebelius, Secretary of Health and Human Services, will be dictating the terms of everybody's insurance policies.

I'm not really sure how potent this claim is. My suspicion is that it plays well with conservative inclined to oppose reform but resonates a lot less with everybody else. But since it's such a staple of conservative rhetoric these days, I think it's worth debunking again -- although only in part, because more government in health care happens to be precisely what we need these days.

Let's start with the basics. In a true "government takeover" of health care, the government would seize control of the entire sector, turning doctors into government employees and hospitals into government institutions. A few countries have systems with some of those characteristics, but the United States is not about to join them -- not even close. Doctors will continue to remain in private practice. Hospitals will continue to operate as private enterprises. And so on.

Nor is it even fair to say that the Affordable Care Act amounts to a government takeover of health insurance, in which Washington is providing everybody's insurance. We have a system like that for the elderly. It's called Medicare. And, truth be told, I'd be quite pleased if we were about to offer the same program to the rest of the country. But we're not. Under the Affordable Care Act, most working-age individuals and families will continue to get coverage from private insurance carriers.

You often hear conservatives complaining that the Affordable Care Act stifles the market -- that we'd all be better off if consumers did more shopping for plans and for medical services, exerting the kind of pressure that would lead to better quality at lower prices. But the whole premise of the Affordable Care Act is to create a market where a functional one does not now exist -- for people buying coverage on their own. That's why the Act not only creates "exchanges" where people can shop for policies but also collects, and then distributes, information about how different insurance plans perform. The hope is that, armed with such information, consumers can make more informed choices and, in so doing, force insurance carriers to perform better.

And yet… the critics have a point when they say the Affordable Care Act's market would not be a totally free one. There is regulation. A lot of it. And, yes, it means Sebelius and her staff are going to spend a lot of time writing rules about what insurance carriers can and can't do. They're in the process of doing that right now: They've already written regulations about how much money insurance companies must spend on actual patient care, for example, and they've started holding meetings about exactly what benefits insurance plans must cover.

So why allow that? For starters, these regulations will set minimum standards designed to make sure the policies people get are actually adequate to their needs. That will be a major change from the status quo, in which people buying coverage on their own frequently end up with policies that have huge gaps in coverage -- maybe they don't cover certain types of services or maybe they have enormous deductibles that can wipe out the average family's resources. Even people with employer-sponsored insurance, which is generally more comprehensive and reliable, can discover their coverage runs out when they hit an annual or lifetime limit on benefits. At least, that used to be the case. The Affordable Care Act has already prohibited such limits and, over time, more such regulations will come into effect.

These sorts of regulations are, fundamentally, no different from the regulations guaranteeing that food and consumer products are safe. In other words, they are a form of consumer protection, pure and simple. But the regulations also serve another role, one that reflects the unique nature of health care as a commodity: These regulations make sure insurance is actually available to everybody.

Everybody knows that insurance companies can treat individuals with pre-existing medical conditions differently -- by refusing to cover the conditions, charging higher premiums, or denying coverage altogether. And everybody knows that, once fully implemented, the Affordable Care Act will largely prohibit such practices. But insurance companies determined to keep out people with pre-existing conditions could still find ways to do so. And one easy way would be by altering the benefit package. If a company wanted to avoid enrolling diabetics, for example, it could simply avoid covering services or treatments associated with diabetes. That's why the essential benefits package is so important -- it prevents, or at least deters, insurers from using those tricks.

But doesn't all that government intervention have a downside? Won't all that regulation drive up the price of insurance? All else equal, it would. But all else is not equal. By making it possible for more people to get insurance, and offering clearer choices that allow people to shop more intelligently, the Affordable Care Act should, in theory, exert some downward pressure on prices, too. And, of course, the regulations come in the context of a much broader scheme that seeks, in more fundamental ways, to reduce the cost of health insurance. (I talked about some of these yesterday.)

None of this is to say the regulations will be perfect or without side-effects. Conservatives frequently worry about government writing bad rules, in ways that lead to unintended consequences or reward well-connected lobbyists. I'm quite sure there will be some of that. And there is an active, legitimate debate taking place right now over just how generous to make the essential benefits package. (For more on that, see N.C. Aizenman's story in the Washington Post and Julie Appleby's dispatch for Kaiser Health News.) But other countries manage to regulate their health insurance schemes far more aggressively with what I would argue is little ill effect. And the experience here of programs like the Federal Employees Health Benefits Plan suggest it's possible to set rules about benefits in ways that will create a functioning market.