Accessibility links
The Nation: Put Poverty On The Agenda With 47 million people in America now living below the poverty line, Katrina vanden Huevel of The Nation shines a light on groups that are trying to help, and argues that the antipoverty movement needs to be more of a priority.

The Nation: Put Poverty On The Agenda

The Nation: Put Poverty On The Agenda 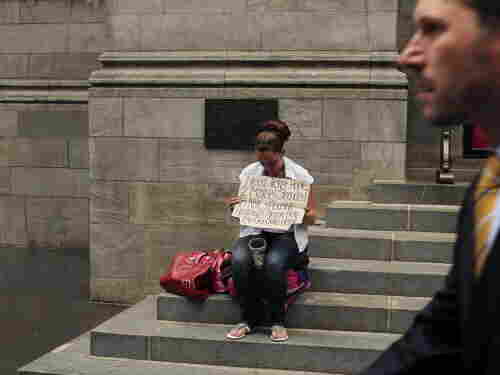 A business man walks by a homeless woman holding a card requesting money in New York City. A new report released by the U.S. Census Data shows that the income gap between Americans is greater than at any other time on record. Spencer Platt/Getty Images hide caption

Katrina vanden Heuvel is the editor and publisher of The Nation. She is a frequent commentator on MSNBC, CNN and PBS.

"There is definitely a story going untold," says Melissa Boteach, manager of Half in Ten, a national campaign to reduce poverty by 50 percent over the next 10 years. "When you have 1 in 7 Americans living in poverty. 1 in 5 children living in poverty -- including 1 in 3 African-American children and Latino children -- and it's not on America's radar, something's very wrong."

Indeed it is the shame of our nation that a record 47 million people now live below the poverty line -- $22,400 for a family of four -- and a stunning 1 in 3 Americans are living at less than twice that threshold. And yet we hear so little about this crisis in the mainstream media and Congress, where it seems off the radar not only for the GOP, but even for some of our progressive allies.

But the grim truth is that many of the same structural problems that are making life a struggle for the middle-class -- and resulted in the first "economic recovery" in 2003-2007 where productivity rose, but median income declined and poverty worsened -- are also leading to record numbers of poor people. From 1980 to 2005, more than 80 percent of the total increase in American incomes went to the richest 1 percent. Our economy is super-sizing the wealthy, while producing large quantities of low-wage jobs, unemployment and underemployment, and services are eroding. So the work of those who are waging today's war on poverty comes with a very different frame.

To meet that kind of ambitious and much-needed goal, antipoverty advocates must overcome a host of stereotypes and myths, including one which refuses to fade, facts be damned: we waged a War on Poverty, and poverty won.

"That's just historically inaccurate," says Boteach. "If you actually look at history you can see that policy interventions really do make a difference. Between 1964 and 1973, the poverty rate fell by more than 40 percent. More recently, the Recovery Act kept millions of people out of poverty."

Indeed the Recovery Act included the largest (temporary) expansion of antipoverty programs in forty years. And according to the Center on Budget and Policy Priorities, it kept more than 4.5 million people out of poverty in 2009 through unemployment benefits, food stamps, the Earned Income Tax Credit (EITC) and Child Tax Credit (CTC) and the new Making Work Pay tax credit. Those provisions will be difficult to extend under the new Republican House "cut-as-you-go" rule, which would require that they are offset by equivalent reductions in other mandatory spending -- not, for example, by closing tax loopholes for corporations that shelter profits overseas. (In contrast, any new tax breaks for the wealthy would not have to be offset at all. If this doesn't speak volumes about the GOP's priorities and hypocrisy on the deficit, I don't know what does.)

There is a mistaken notion that those who benefit from the kinds of antipoverty measures included in the Recovery Act are part of a "permanent underclass." But poverty isn't static -- people are moving in and out of it constantly, and 1 in 3 Americans will experience poverty during their lifetime. So fighting poverty isn't about helping "the other," it's about all of us. Yet seeing that common ground can be difficult in tough times like this Great Recession. Often, people understandably turn inward, doing their best simply to look after their own families. On the flip side, times like these can lead to greater empathy, an understanding that economic struggle isn't about being lazy, or not wanting to work.

"The fact is we all have the potential to lose a job and experience economic insecurity, and we want that safety net there for us as well," says Boteach. "People who never thought they would rely on food stamps are now needing them -- we hear that all the time. People who used to be the ones volunteering at soup kitchens or working at service-providing non-profits are now often forced to turn to those same services themselves."

It was Michael Harrington's powerful examination of poverty published in 1962, The Other America, that moved President Kennedy to begin taking the steps that culminated in President Johnson's War on Poverty. Perhaps there is another Harrington out there, but for Half in Ten and the hundreds of civil rights and antipoverty groups in the coalition, they are focusing on the stories of people who are experiencing poverty themselves.

"I think the most effective people I've heard talk about poverty are low-income people," says Boteach. "We need to lift up those voices and have them tell their stories." State coalition partners are working hard to elevate voices and provide opportunities for storytelling -- a lost art that will serve both this movement and those who cover it well.

In Minnesota, for example, the "Enough For All" event featured artists across the state interpreting the concept of "enough" -- as in having enough resources, or having enough/being fed up -- through performing arts, visual arts and spoken word poetry. (This strikes me as akin to the WPA and federal theatre project and the role it played in bringing attention to the plight of the poor and unemployed.) The Colorado coalition is organizing low-wage working women to raise awareness of poverty in the state and advocate for policy solutions that will benefit low- and moderate-income people. In D.C., the Making the Tax Code Work for Working Families event gave people a chance to tell how the EITC and CTC impact their families.

"These tax credits make a big difference for working families," says Boteach. "Contrast that with the recent estate tax giveaway that conservatives demanded. [It] benefited only the wealthiest one quarter of one percentage point of families, adds to the deficit, and does virtually nothing to create jobs and grow our economy. We need to start drawing those contrasts now because we're going to have this debate on tax policy again in two years."

More immediately, with a Republican House determined to slash 22 percent ($101 billion) from discretionary spending for fiscal year 2011, Half in Ten will focus on the looming budget battle.

"Domestic discretionary sounds very cold and stale. What that actually is -- it's childcare, Head Start, federal housing, transportation, job creation programs, job training. These are programs that not only low-income families rely on, but are really building blocks in our economy and communities," says Boteach. "It's one thing to say, 'We're slashing spending.' Then you say what does this actually mean for communities and families? What does it mean for job-creation? And then it becomes real, it becomes human. A budget is a moral document, it's a statement of priorities."

Antipoverty advocates are making the case that policies supporting lower- and middle-income people make fiscal and economic sense too. Economist Harry Holzer has shown that the cost of sustained childhood poverty is more than $500 billion per year, or 4 percent of GDP, roughly evenly divided between lowered productivity, increased health care costs and increased crime-related costs.

"By making smart investments up front now in children we can actually save money in our budget later on," says Boteach. "But that doesn't necessarily show up in a five to 10 year budget window."

As coalition members and activists write op-eds and letters to the editor, call, write and lobby their federal and state representatives and tell their stories, they will also be focused on holding elected officials responsible for creating jobs, preserving critical services and expanding the middle-class.

"There needs to be an emphasis, always, on accountability," says Boteach. "That's why we did an interactive poverty map by Congressional district. You can see the poverty rates by race, gender, and child poverty for your district and then figure out how your member is voting on these issues."

But growing the antipoverty movement will require the media and elected officials to start paying more attention to those who are struggling, fighting and organizing. When the US Census published record poverty numbers for 2009 our warp-speed news cycle ran the headlines and then just as quickly moved on. The 2010 data which will be released in September will likely be even worse due to the sustained unemployment over 9 percent. Half in Ten and other advocates will be ready to speak to this moral, economic, and political crisis. But it remains to be seen who will listen, and for how long.

"There are always a lot of headlines about poverty the day that the data comes out," says Boteach. "But then those headlines fade, and the problem hasn't gone away. What we need is a sustained focus by the media and our elected officials, and we need advocacy groups and grassroots activists to keep making that push."

Call it a war on poverty, call it expanding the middle-class, call it promoting economic security. Call it whatever you want, but start making the connections between the plight of the middle-class and lower-income Americans, and get involved.