Accessibility links
'Ask Not...': JFK's Words Still Inspire 50 Years Later On Jan. 20, 1961, John F. Kennedy gave an inaugural address that became one of the most famous speeches in American history. It shaped the lives of many who took his words to heart. But will the message fade as generations pass? 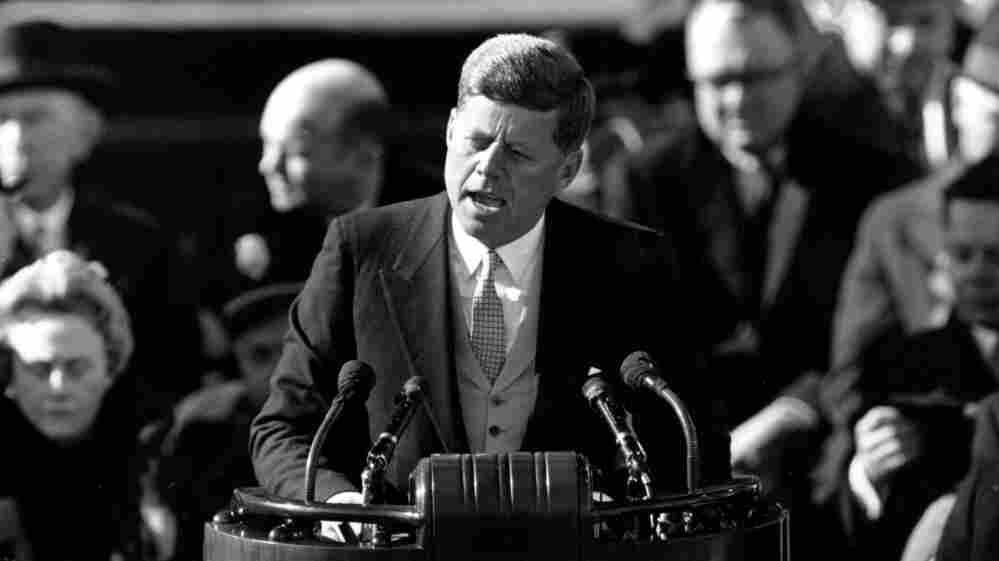 During his inaugural speech on Jan. 20, 1961, U.S. President John F. Kennedy wasn't wearing a coat or hat in freezing weather as he spoke of beginnings and ends, war and peace, disease and poverty. AP hide caption 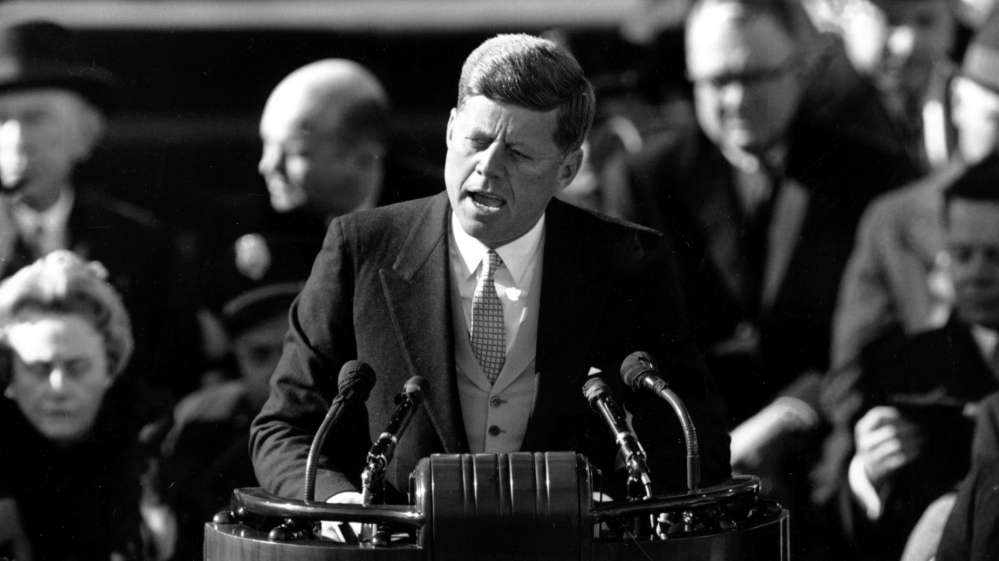 During his inaugural speech on Jan. 20, 1961, U.S. President John F. Kennedy wasn't wearing a coat or hat in freezing weather as he spoke of beginnings and ends, war and peace, disease and poverty.

Bruce Birch woke to find the city at a near-standstill. Blanketed by eight inches of snow, the nation's capital reacted to the weather in much the same way it does a half-century later -- by pretty much shutting down.

Birch was a student from Midwestern College in Kansas who was studying at American University in D.C. for a semester. And for him, waiting out the weather wasn't an option.

History would be made that day. John F. Kennedy, the youngest man ever elected U.S. president and the first Roman Catholic, would be sworn in at the Capitol, some seven miles away. And Birch was determined to be there.

Watch a video about the writing of Kennedy's inaugural address.

"Being 19 years old, you sort of think you're invincible, so we figured we'd go anyway," he says.

He and a friend caught a bus from the university in Northwest Washington, got stuck in the snow in downtown D.C., and hiked the final two miles.

"I remember being very, very cold," he says. "It took us a long time to get there. It was literally still snowing and blowing."

Cold as it was, Birch says, "I always felt it was worth it."

A Challenge To America's Youth

Once there, huddled beneath a group of trees facing the Capitol, Birch heard what would become one of the most famous speeches in American history, a speech that would help shape his life -- and his generation.

Kennedy stepped to the podium. Famously, he wasn't wearing a coat or tie. Deeply tanned in the bright winter light, he stood out against the backdrop of bundled politicians and family. From the back of the crowd, Birch and his friend watched, passing a pair of shared binoculars back and forth. But it wasn't the images that stuck with them; it was the words. 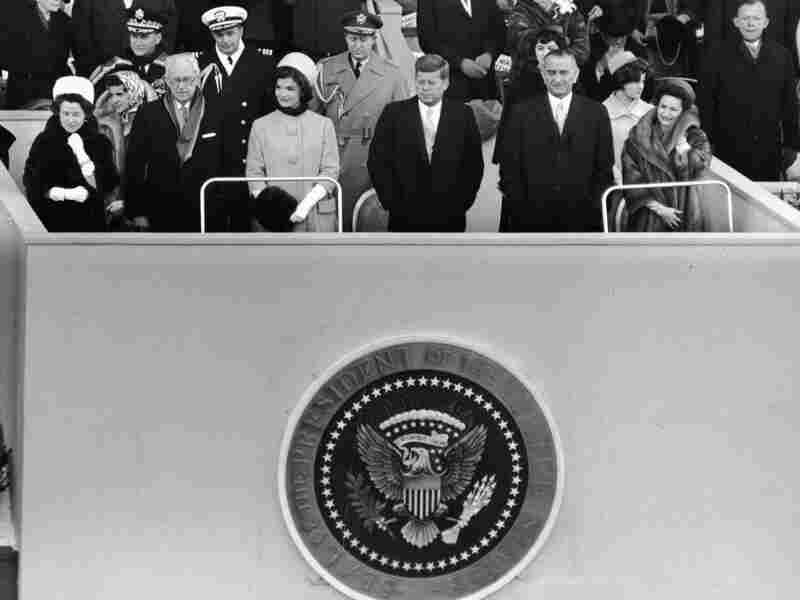 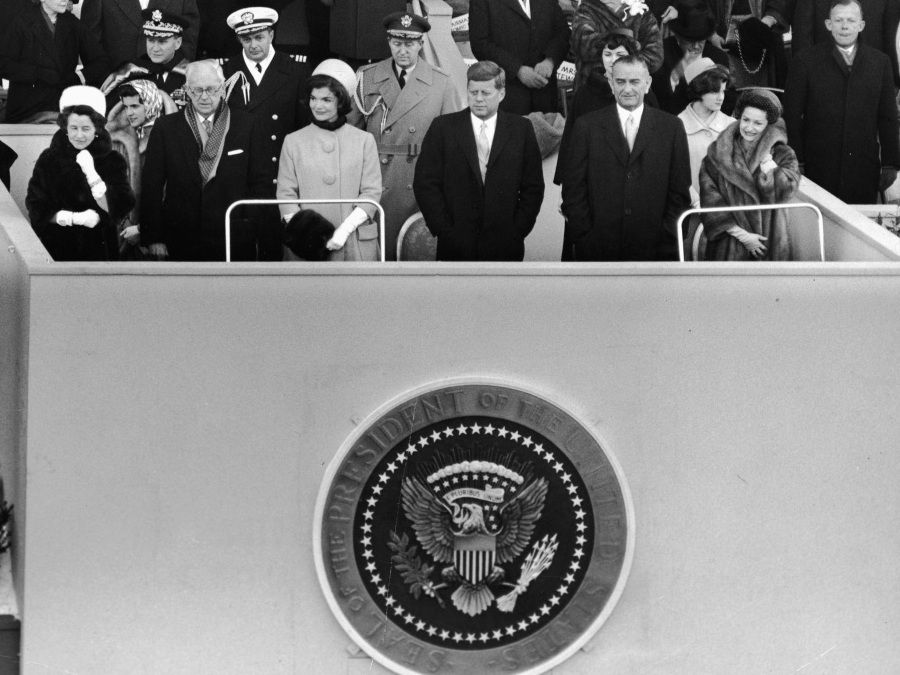 John F. Kennedy stands on a platform for his inauguration on the east front of the U.S. Capitol on Jan. 20, 1961, accompanied by his parents, Rose and Joseph Kennedy, First Lady Jacqueline Kennedy, Vice President Lyndon Baines Johnson and his wife, Lady Bird Johnson.

Kennedy started: "We observe today not a victory of party, but a celebration of freedom -- symbolizing an end as well as a beginning -- signifying renewal as well as change."

Kennedy's inaugural was as much a challenge to America's youth as it was a speech. And the challenge was not lost on Birch.

"I remember feeling very invigorated by it," Birch says. "Feeling at the end of the speech, man, this really makes me want to do something, to contribute."

That's what Kennedy's speech was intended to do. He touched on inspiration in many ways -- "the torch has been passed to a new generation of Americans.… Now the trumpet summons us again.… I do not shrink from this responsibility -- I welcome it."

But none were as direct or memorable as the "Ask Not" line. That was the one that made service an American imperative.

Birch was one of the many listeners who took it to heart. He went on to become a teacher, a professor and, later, dean of Wesley Theological Seminary in Washington, D.C. -- positions he held for 38 years before retiring.

Donna Shalala was sitting on the floor of her residence hall at Western College for Women in Ohio that January day. The room was packed with freshmen, she remembered, but dead silent as everyone watched on a fuzzy black-and-white television set.

Shalala was a 19-year-old freshman with a lot of options.

"I could go to graduate school, I could go to law school," she says. "Before I heard the speech I was thinking of being a journalist, a war correspondent as a matter of fact."

I remember feeling very invigorated by it. Feeling at the end of the speech, man, this really makes me want to do something, to contribute.

But Kennedy's speech changed all that.

She remembers feeling like Kennedy wasn't addressing the nation, he was addressing her. And "he was talking about public service," she says.

She'd never considered public service until that day, until his words hit her "like a splash of water," as she puts it.

In 1962, Shalala was one of many young Americans who joined the newly-formed Peace Corps, an organization she called, "the embodiment of President Kennedy's call to our generation for service." Its first director, Kennedy's brother-in-law Sargent Shriver, died Tuesday.

Shalala went to a mud village in southern Iran, part of the Peace Corps' first batch of volunteers. It was a learning experience for everyone, she says. All the Iranians knew was that these kids were sent to help by an "energetic young president." And because of that, she says, they were welcomed.

For two years she taught at an agricultural college before returning to the U.S. where she earned her doctorate at Syracuse University.

Shalala went on to serve as a professor, president and chancellor at numerous colleges. In 1993, Bill Clinton made her his Secretary of Health and Human Services.

Today, Shalala is the president of the University of Miami. She's garnered many honors in her career, the most prestigious in 2008, when then-President George W. Bush awarded her the nation's highest civilian award -- the Presidential Medal of Freedom.

Gonzalo Barrientos was a freshman at the University of Texas when he heard the speech.

The son of farmers and cotton pickers in central Texas, Barrientos was studying business because it was a way to escape.

"I didn't want to stay in the cotton fields forever," he says. Barrientos wanted more -- not a lot more, just an opportunity to "go out and be a part of a place that had air-conditioning and carpet -- the niceties that life could provide in this country."

Barrientos figured that a business degree was the best way to do that. Kennedy's speech made him reconsider.

"It was what I had always learned about in books in elementary and high school about the American dream, even though I saw that American dream being shattered when I grew up," he says. Barrientos, now 69, dealt with poverty and racism growing up. So when Kennedy, "spoke for all of us, he spoke to all of us whether you were poor, rich, whatever color, whatever background as an American," he says. "That was especially inspiring to me."

Barrientos seized that inspiration. He switched majors, focusing on sociology, economics and government. He went on to train newcomers to the Volunteers in Service to America (VISTA), and in 1974 he became one of the first Mexican-Americans elected to the Texas state legislature.

He served in the House for 10 years and in the Texas Senate for 21 more. His goal: "to help the community, to help the poor people, to help the downtrodden, to empower those people to get the American Dream. All of which, I think, came from John Kennedy."

But the inspiration didn't strike everyone immediately. Bill Hilliard heard Kennedy's speech, but says it wasn't until two years later, on Nov. 22, 1963, that the words inspired him into action.

That morning, around the same time Kennedy was setting out in a motorcade in Dallas, a 21-year-old Hilliard was at work in Jackson, Mich., reading a letter he'd received that morning, "for the third or fourth time," he says.

It was a draft letter. But Hilliard didn't want to be a soldier. He was working at a small insurance business. He was in school, just in between semesters. He wanted to be an artist.

There was the anti-war movement, his own moral misgivings. He contemplated running to Canada. And then he heard the news.

Kennedy had been shot. He listened with his co-workers as the events unfolded.

"We just couldn't believe it," Hilliard says. "After it was confirmed, after Walter Cronkite made his announcement, I went upstairs and got an old copy of Life magazine, which had a picture of [Kennedy] on it. And on the page opposite of the photograph it said, 'Ask not what your country can do for you, but what you can do for your country.'"

Hilliard tore off the cover, painted "Closed in Memoriam," on the bottom, and taped it to the front door of the insurance business.

The next day, he enlisted in the Air Force. He traveled around the Pacific Rim for the next two years and in 1965, "The first time I was in Vietnam, we were in Da Nang and the words came back to me again about 'Ask not…'" he says.

"It was the reason I went in," Hilliard says, now 70. "It made me more of a patriot than I had ever been. I really believed in the country you know? It was a turning point, a real change of life and I wouldn't trade it for anything."

Fifty years later, it is another cold and quiet January day in the nation's capital.

From across the river, in Arlington National Cemetery, the white dome of the Capitol building, where Kennedy spoke and 1,038 days later, laid in state, is a blip on the horizon.

It's here, at Kennedy's gravesite, that pieces of his speech are etched in granite. Among them, the infamous "Ask Not," line that inspired Barrientos, Birch, Hilliard, Shalala, and countless others -- teachers, nurses, veterans and volunteers.

You think about it and it still clicks today, thinking about what you can do instead of trying to see what other people can do for you.

But half a century has passed. Those who heard those words and acted on them are reaching the end of their careers. Will Kennedy's challenge fade with the generation that carried it?

Andrew Collier, 21, from Tennessee, doesn't seem to think so. He says he learned the words in school, more times than he can count

"You think about it and it still clicks today, thinking about what you can do instead of trying to see what other people can do for you," he says.

It clicked for him. He's still tan from his most recent trip to New Orleans -- his sixth -- where he's helping to rebuild houses destroyed in Hurricane Katrina.

Laying new floors, putting up walls -- it's Collier's way of giving back, of answering his generation's challenges. And in a way, he's answering Kennedy's.

Even the next generation is familiar with Kennedy's words. Kole Hultgren, 6, was visiting the cemetery with his family and his dad, Randy Hultgren, a freshman Republican congressman from Illinois. The family says Kole knows the words well and asks him to recite them.

It isn't perfect. But it's close. And in the numbing cold, with the wind and snow, it doesn't seem all that different from what it must have been on that day, 50 years ago.