Accessibility links
Afghan Fuel Costs Spike As Iran Flexes Muscle For a month, most fuel trucks bound for Afghanistan through Iran have been stopped at the border. Observers in Kabul say Iran is showing its leverage with the U.S. Army next door. Afghans are protesting against Iran, and even showing rare support for the U.S. presence. 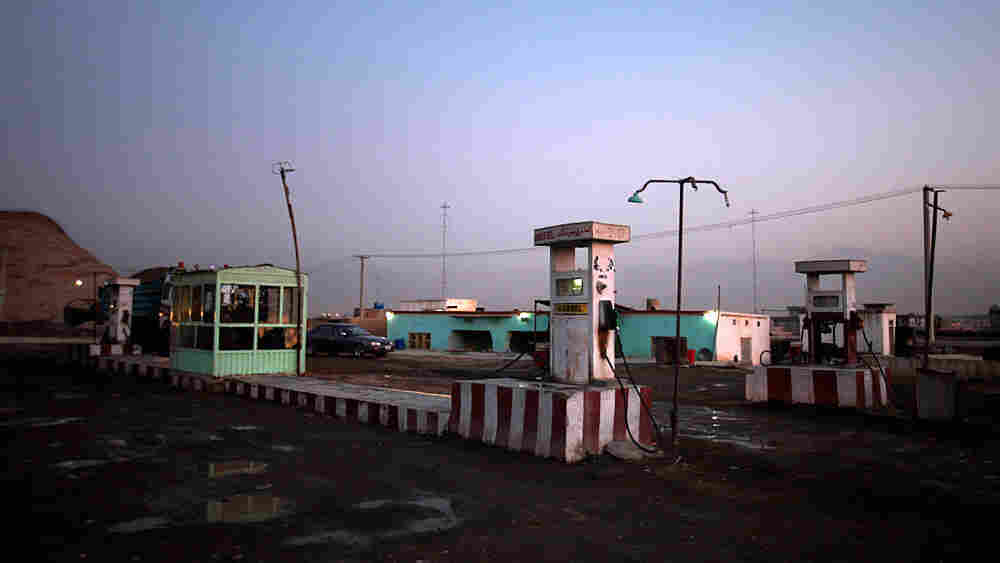 Many fuel stations in Afghanistan, such as this one on the outskirts of Kabul pictured on Jan. 4, are deserted these days. Iran has been blocking fuel trucks from entering Afghanistan, causing price hikes and protests among Afghans. Altaf Qadri/AP hide caption

Afghanistan's frigid winter has been made colder by some unneighborly actions by Iran: For a month, most fuel trucks bound for Afghanistan through Iran have been stopped at the border. As a result, gasoline and heating fuel prices have spiked, which poor Afghans can ill afford.

Iran says it's trying to stop fuel heading for U.S.-led NATO forces, which the U.S. denies. Observers in Kabul say Iran is showing its leverage with the U.S. Army next door.

But there have been side effects -- anti-Iranian protests in Kabul, and even a rare protest in favor of the U.S. presence. 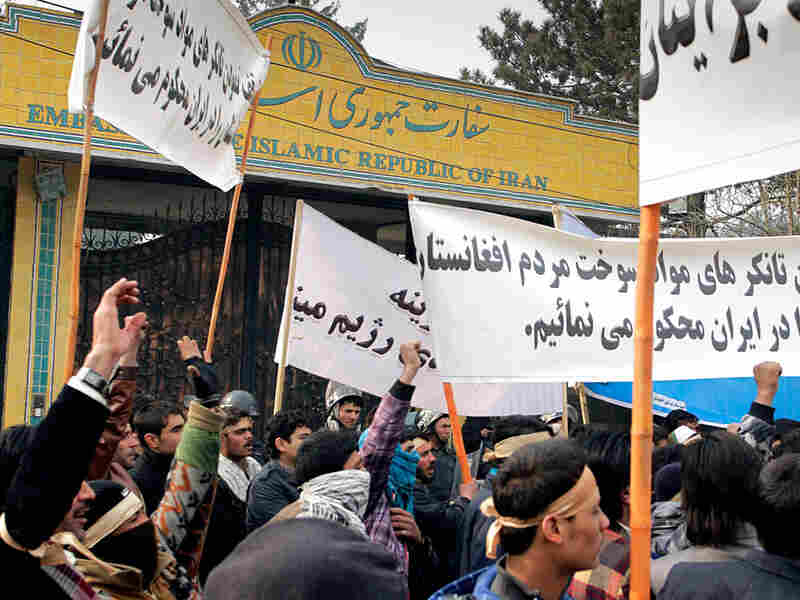 Afghan demonstrators shout anti-Iran slogans during a Jan. 7 protest in front of the Iranian Embassy, condemning the stopping of fuel tankers on their way into Afghanistan from Iran. Musadeq Sadeq/AP hide caption

Scores of young Afghans riding bicycles assembled recently outside the Iranian Embassy in downtown Kabul -- a fitting symbol for a protest against rising fuel prices. They carried a banner reading, "Life without oil is possible. Life without honor is not."

One man in the crowd shouted out the names of Iran's ambassador to Afghanistan, Iran's president and Iran's supreme leader, to which the throng replied, "Death!"

It's not just that the price of heating oil and gas is up 50 percent; knock-on effects are driving up prices of anything that needs to be transported by truck. And in Afghanistan, that's just about everything.

Lines have been long outside gas stations in Kabul. The manager of one, Ghulam Sakhi, says some taxi drivers and truckers are wondering if they can afford to work at all with the prices so high.

"It's affecting the price of our food and our firewood, and it's getting colder day by day," says Sakhi.

About half of Afghanistan's domestic fuel comes through Iran, according to Afghan Commerce Minister Anwarul Haq Ahady, the first government official to publicly criticize Iran's actions.

"We are not satisfied with the negotiations over this issue," said Ahady. Iran had promised to end the embargo after a recent visit from the Afghan vice president, Ahady said. But the promise was broken, he added, and with no good reason given for the blockade in the first place. On the international level, reasons are easier to see.

"In the past, this is not new," says Haroun Mir, a political analyst in Kabul. "Iranians have also used Afghanistan [as] leverage."

Mir says that Iran is trying to show the U.S. that it has influence over the success of the American project in Afghanistan, as a warning against any U.S. strike against Iran.

He also cites domestic reasons inside Iran; the U.S. has led efforts to squeeze Iran's economy with sanctions, and Iran is currently pushing through its own painful economic reforms, cutting the national subsidy on fuel. For Tehran, hoarding fuel may help ease the stress of both.

Also, says Mir, Afghanistan's neighbors all want their interests to be considered in any peace negotiations with the Taliban. 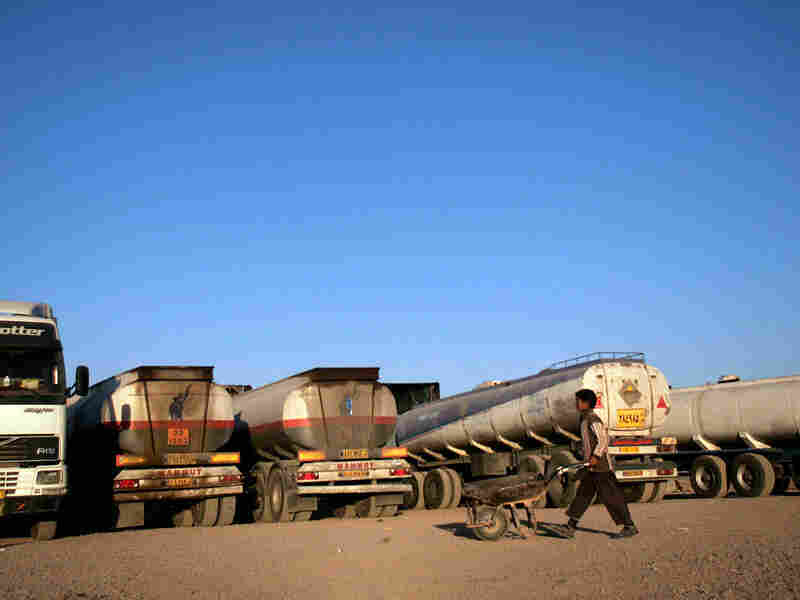 An Afghan boy pushes a wheelbarrow past oil tankers parked up near the Afghan-Iran border at Islam Qala on the outskirts of Herat, west of Kabul, Jan. 4. Reza Shirmohammadi/AP hide caption

"All these countries have a lot of stakes in Afghanistan, and they don't want to be ignored in case of a political settlement. These are warnings that Iranians are sending to the Afghan government and also to the United States," Mir says.

An Unusual Tilt Toward U.S.

But Afghan people feel caught between, says Fardeen Hashimy, one of the bicycle-riding protesters.

"Iran is allied with government elites in Afghanistan," says Hashimy, perhaps referring to some of the former warlords inside the Kabul government who in the past were sheltered and armed by Iran. Afghan President Hamid Karzai also has admitted to receiving literal bags full of cash from the Iranian government.

Hashimy says that Iran and some in the Afghan government are dismayed at the sight of peaceful protesters like him. But given a choice between the Iranian influence and the Americans, Hashimy says, he'll take the U.S.

It's a sentiment that took the protesters, by pedal power, from the Iranian Embassy in Kabul to the American Embassy for a rare public demonstration in support of the U.S. -- including a moment of silence for the nearly 1,500 American soldiers who have died, so far, in Afghanistan.