Accessibility links
Cuba Issues Thousands Of Self-Employment Licenses The licenses are aimed at helping to offset coming layoffs of 500,000 government workers, including many Cubans who may not have the wherewithal to start a business or make it on their own. 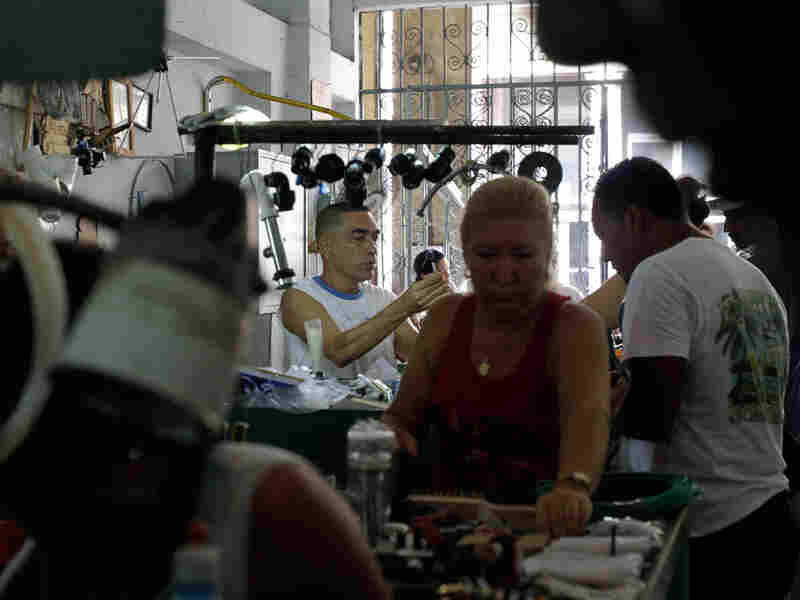 Workers sell goods inside the "Monte-Indio" self-employment market in Havana in September 2010. Cuba's government began laying out the details of its drive to create more free enterprise on the island in September. Officials say 75,000 self-employment licenses have been issued so far. Franklin Reyes/AP hide caption

Communist authorities in Cuba have issued more than 75,000 new self-employment licenses to help offset the layoffs of half a million government workers in the coming months.

But it's not clear if they can create jobs fast enough.

DVD pirates were the first to emerge from the shadows of Cuba's underground economy. They've set up homemade display racks all over the city, blasting bootlegged CDs at pedestrians like street vendors in any other Latin American capital. They have reggaeton music, Harry Potter movies and nature shows lifted off the Discovery Channel -- and they're now licensed by the Cuban state, which cares far more these days about job creation than copyrights.

Elsewhere, Cubans are delivering pizzas, or setting up snack bars and restaurants in their homes, and even hiring employees. It may not be a recipe for economic growth, but at least it's creating some optimism during an otherwise worrisome time for Cuban workers.

On a recent day, Dayami Sanchez, 26, sits at a small stand outside her Havana apartment building, knitting a cap. She says she's her own boss, sets her own hours and manages her own money. The stuffed animals, hot pads and other knickknacks on her table were all handmade, but it had taken her a week to crochet a pair of $5 gloves.

A few blocks away, Rene Ramos, 70, was walking up and down the street blowing a whistle to draw attention to his homemade peanut bars. Without a whiff of irony, Ramos described himself as a symbol of the Cuban Revolution, saying he had been a lieutenant colonel in the Cuban military and served overseas in Angola.

Ramos says he thinks it's magnificent that everyone now has the opportunity to work legally, explaining that he has spent the past 10 years dodging the police to avoid fines. He adds that he doesn't mind paying a few dollars a month in taxes.

According to the government, 68 percent of the new business licenses have gone to those who were previously unemployed, a sign that many Cubans are simply legalizing jobs they used to do on the black market. But the problem is that once the layoffs start, Cuba's economy must absorb 500,000 workers -- 10 percent of the island's labor force -- in just a matter of months, including many Cubans who may not have the wherewithal to start a business or make it on their own.

"It's not the state anymore," says Ricardo Torres, a Cuban economist. "It's you, the main actor of your own destiny or fate, right? It takes time to get used to that scenario, right? So probably many people will apply for new licenses, but not everybody will succeed."

There are plenty of obstacles: Taxes can be high, and the government will license only 178 specific trades, including palm-tree pruner, button maker and fruit peeler. At least the application process only takes a few hours, light speed by the standards of Cuban bureaucracy.

Monica Yanez, a 22-year-old cosmetology student waiting to pick up her license at a government office in Havana, says she might have tried to get a job at a state-run beauty salon in the past. Now she's building one in her home.

She says she has a chair, a mirror and brushes -- adding that what she would really like is to get some independence from her parents.

The government says it will complete the job cuts by March, but there have been no reports of mass layoffs yet. It's possible the process will drag out longer, allowing the authorities to better manage social and political tensions and offer other jobs to the unemployed in less-desirable industries like construction and agriculture.