Accessibility links
Tunisians Loot Lavish Homes Of Former Ruling Clan Tunisians say they want a complete break with their autocratic former ruler. They say the president, his wife and her family abused power and enriched themselves at the expense of the Tunisian people, who are now trashing the family's villas. 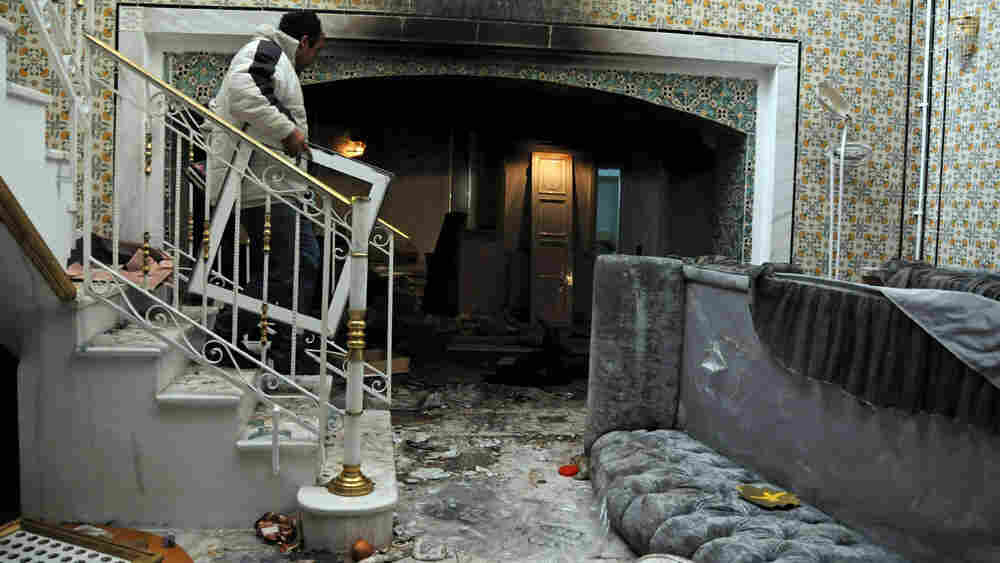 A man carries goods from the house of Belhassen Trabelsi, the brother of the former Tunisian  president's wife, Leila Trabelsi, in Sokra on Saturday. Many Tunisians say they despise their former president, Zine El Abidine Ben Ali, his wife and her family because they abused their power and enriched themselves. Hassene Dridi/AP hide caption

In the days since the overthrow of Tunisia's dictator, looters have ransacked a whitewashed villa in an upscale suburban neighborhood of Tunis called La Marsa.

The house belonged to businessman Moaz Trabelsi, one of the 10 brothers of the ousted president's wife, Leila Trabelsi. And it's a scene that is playing out across the country at homes owned by relatives of president, Zine El Abidine Ben Ali.

Tunisians say they want a complete break with their former ruler, They say the president, and in particular his wife and her family, abused power and enriched themselves at the expense of the country's people. 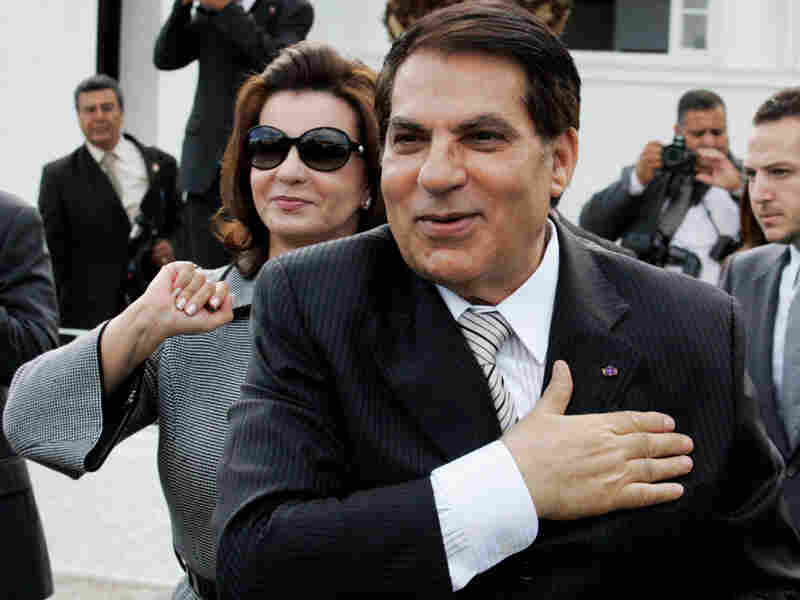 On Tuesday, Tunisia's new interim government was on shaky ground. Four Cabinet ministers resigned and others threatened to do so in protest over the continued presence in the government of Ben Ali's allies.

After days of looting in that suburban villa, there's nothing more to take away. But still, hundreds of people still come every day to visit the wrecked shell.

One of this day's visitors is Mounir Khelifa, an English professor at the University of Tunis. He points to a burned-out Porsche Cayenne and calls the mansion a "thief's" or "robber's" house.

The swimming pool has a mattress floating in it. Broken furniture and women's magazines litter the yard. Families are walking through the villa's empty, trash-strewn rooms as if it were a real estate open house.

Khelifa says Tunisians despise the president they deposed, but they hate his wife even more. The 55-year-old former hairdresser is 74-year-old Ben Ali's second wife.

Like the tentacles of an octopus, the Trabelsi clan wrapped itself around almost every sector of the country's economy, their critics say. They controlled the car dealerships, the banks, the airlines, the media and the major retailers.

Amel Jertila, a 37-year-old who started her own company, says doing business in Tunisia was hell.

"It was terrible. And you are scared all the time. What if I cross them one day in my life, what will happen to me? After years of work, we are scared of phantoms that are called Trabelsi and Ben Ali," she says.

Cables from the U.S. ambassador in Tunisia that surfaced in WikiLeaks paint a picture of a family that lived in excessive decadence, while many Tunisians lived below the poverty level. Invited to dinner at the villa of Ben Ali's favorite son-in-law, the ambassador described ice cream imported from St. Tropez on a private jet and a pet tiger in a cage on the compound.

Just three days before the final wave of protests that brought Ben Ali down, writer Abdelaziz Belkhodja took the risk of distributing documents showing the extent of what he calls the mafioso activity of the president, his wife and her family.

"It reached unimaginable proportions. These people wanted to take over the country. That's why they took the banks and the media. She appointed the ministers, because after his death, she wanted to keep control of the country," Belkhodja says.

He estimates that in their two decades in power, Ben Ali and his extended family stole about $20 billion -- twice Tunisia's national budget.

Another magnificent villa -- this one on a hillside -- is the home of a simple primary school teacher whose name happens to be Adel Trabelsi.

Inside the house, Tunisians are ripping out wiring and trying to detach some electric blinds from the windows. Everyone is smiling. Khelifa, the English professor, says no one in their wildest dreams would have imagined such a sudden and ignominious collapse of the Ben Ali-Trabelsi family.

"We suspected that tyrannical power is weak. But to this extent, this kind of weakness is just amazing," Khelifa says. "I think if there is one lesson to be learned, it's precisely that dictatorships, they're giants with feet of clay."