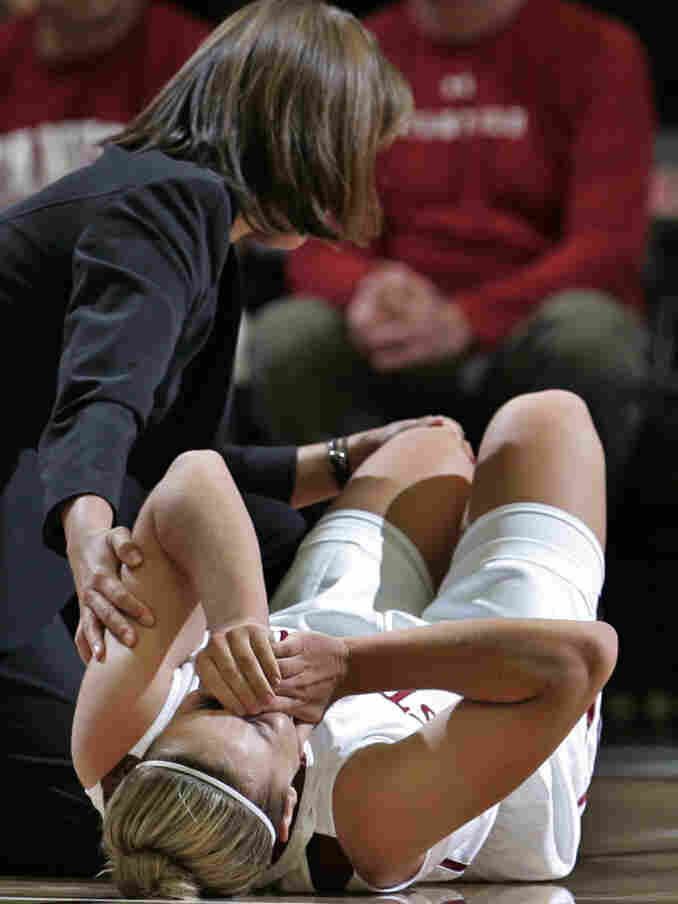 Torn ACL injuries, like this one suffered by Stanford point guard JJ Hones in 2008, can have long-term consequences. Paul Sakuma/AP hide caption 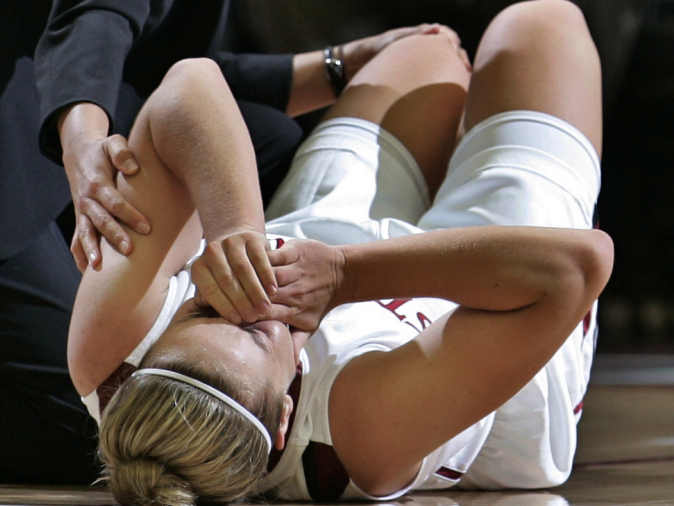 Torn ACL injuries, like this one suffered by Stanford point guard JJ Hones in 2008, can have long-term consequences.

I've spoken to horribly disabled old football players who told me they'd do it all again, whatever life's sacrifice, just to have played the game. How many players have taken performance-enhancing drugs without any concern about the possible side effects? So many athletes will do almost anything to compete.

But now, in an ironic twist, some surgeons have come to feel terribly conflicted about their part in salvaging an athlete's career.

Injury to the ACL -- the anterior cruciate ligament -- is a well-known athletic wound, as famous as rotator cuffs or concussions. And orthopedic surgeons can repair a damaged ACL.

Ah, but here's the rub. Doctors know that because the surgery allows young athletes to continue to compete aggressively and put stress on that damaged knee, a significant number will, in as few as 10 years, suffer degenerative osteoarthritis. That is so much more debilitating and painful -- and must be endured for the rest of one's life. Some may even require knee replacement.

Yet, Dr. Robert Stanton, the president of the American Orthopaedic Society for Sports Medicine, told me that even when this grim reality is carefully explained to young athletes, they almost all opt for the ACL operation. "They're young; they're invulnerable. Above all, they just want to keep playing."

I told Dr. Stanton that it sounds like some fairy tale where the evil wizard promises to make you the most beautiful woman in the world, only in 15 years you'll turn into an ugly toad.

The specialists are so troubled that last month they held a think tank in New Orleans to discuss post-traumatic osteoarthritis.  But, when it came to the effect of the ACL operation, the physicians left with no new answers.

The basic problem is that when the ACL -- which goes down the center of the knee, helping attach the shinbone to the thighbone -- is torn, it damages both bone structure and cartilage. But cartilage doesn't heal. It just doesn't. And eventually, as the young athlete grows to middle age, the arthritic problems appear.

What makes ACL injuries even more dramatic is that they're much more common with females. No one knows why for sure. It may be because the female pelvis is wider, putting a greater angle of pressure on the knee. It may be hormonal. It may be that girls -- at least until recently -- have not been as well-conditioned as boys. So in sports like basketball, volleyball and skiing, ACL injury is a special blight for girls and young women.

But then, athletes are cursed with the desire to do anything to keep playing, so sports surgeons are more and more distressed that they're being forced to be the devil's instrument, to enable a young passion that will result, later, in years, even decades, of pain and disability.

It's a cruel moral dilemma for the doctors, as the youthful sweet seduction of sport trumps the everyday grace of a healthy middle age.