Accessibility links
More Americans Learn Their ABCs In Chinese The number of Americans studying Chinese is soaring, thanks in part to deeper economic ties with China. Kids from one Chinese-language immersion school met the U.S. and Chinese presidents on Wednesday, an example of the students from elementary schools to colleges who are signing up to learn what some have dubbed the "language of the future." 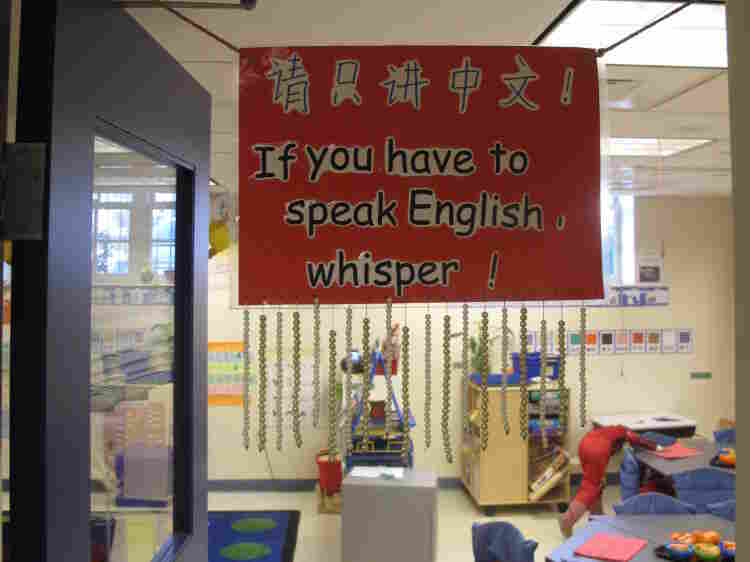 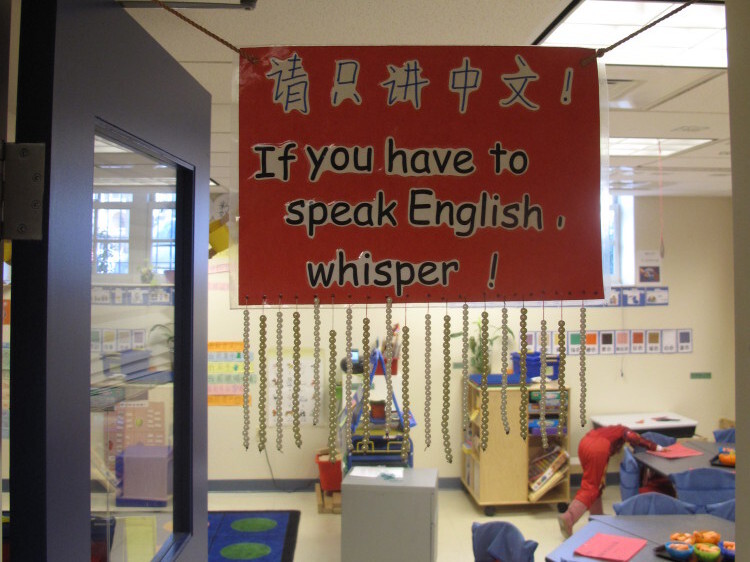 A sign encourages children at Yu Ying Public Charter School to speak Chinese instead of English. The Chinese-language immersion school is in Washington, D.C.

When President Obama welcomed Chinese President Hu Jintao to the White House on Wednesday, he was joined by a group of students from Washington, D.C.'s Yu Ying Public Charter School. It's a Chinese-language immersion elementary school -- the first in the nation's capital and one of only a handful in the United States.

Interest in learning Chinese has surged in the past decade as American economic ties to China have deepened. A growing number of elementary and high schools are offering Chinese classes -- though few teach it as intensively as Yu Ying in the northeast D.C. neighborhood of Brookland.

A sign above the door of one classroom says "If you have to speak English, whisper!" Inside, 25 pre-schoolers sit on the floor and listen to teacher Jue Wang. But learning the ABCs isn't on the lesson plan today.

Wang shows her students a white board with a poem written in Chinese characters. She speaks the characters aloud and the students mimic her.

"They actually know more than I do," says Mary Shaffner, Yu Ying's executive director. "I know a little bit of Chinese, but they're actually better than me. It's amazing these 4-year-olds have only been in school since the beginning of the year and you saw them read all those characters."

The school, founded by Shaffner and a group of parents, opened three years ago. In Chinese, the name "Yu Ying" means "nurturing excellence" -- it's a reference to a groundbreaking girls school founded in Beijing in 1911.

Today, Yu Ying is open to pre-kindergarten through third-grade students, but it has plans to expand up to the eighth grade.

As a public charter school, Yu Ying doesn't charge any fees, though parents do have to apply to send their kids. The student body is about half African American and one-quarter white. Most of the remaining students are Asian -- many from families that speak English as a first language.

'Language Of The Future'

Shaffner's daughter, a first-grader, is a student at Yu Ying. Shaffner says she helped found the school because she had a sense that Chinese would become a global language.

"We thought this is really the language of the future and what an edge to give our children," Shaffner said.

Frank Lowenstein had a different motivation for enrolling his first-grade daughter. "With the amount of money we currently owe the Chinese, I figured it couldn't hurt to have a daughter who spoke Chinese when they come around to collect."

China's growing importance to the United States is driving the boom in Chinese education across all levels.

In 2007, the College Board started offering Advanced Placement exams in Chinese for high school students. Almost 5,000 students took the exam in 2010. That's more than double the number from just four years earlier.

College students taking Chinese also more than doubled between 1998 and 2009 to 60,976 students, according to a study by the Modern Language Association.

Still, Spanish remains by far the most-commonly taught foreign language in American classrooms, with 864,986 students enrolled in Spanish classes in 2009, according to the same study.

Although Chinese instruction has grown rapidly over the past decade, it continues to lag a number of languages at the college level, including French and German.

From 1998 to 2009, the number of college students studying Chinese more than doubled.

But for many students, learning Chinese is now vital to their careers.

Joshua Sloan, a freshman at George Washington University who plans to major in business and minor in Chinese, was inspired by his father, who works for retailer Costco and travels regularly to China.

"He doesn't speak the language and while he does a great job and is very good at dealing with people, it would give him that much more of an edge if he spoke Chinese," Sloan says.

Hundreds of high schools across the country have also added Chinese to their curriculum -- sometimes at the expense of other languages. Some of those schools receive financial assistance from the Confucius Institute, an organization backed by the Chinese government. 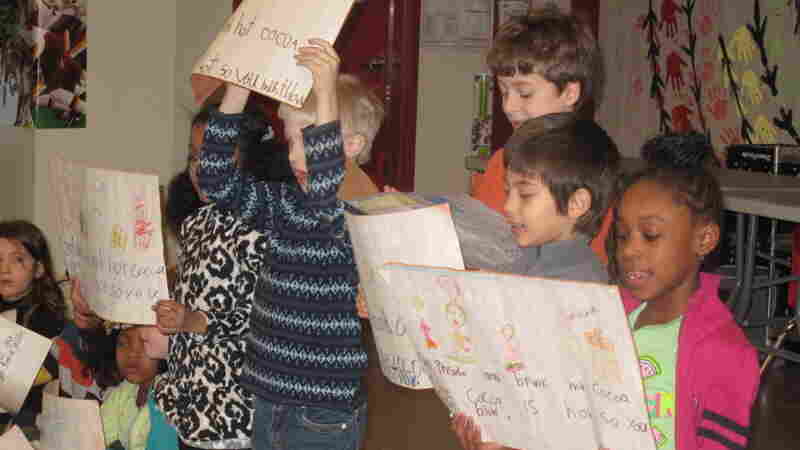 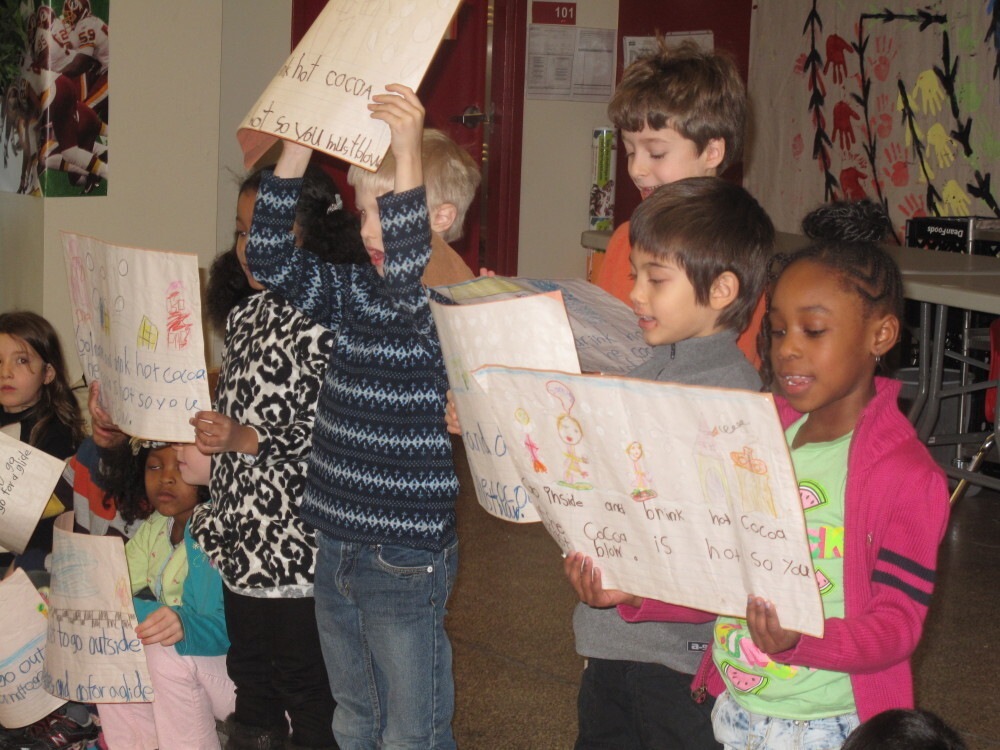 Yu Ying first-graders recite poems in English and Chinese at a school assembly.

Despite the rapid interest in Chinese, languages follow fads, says Jonathan Chaves, a professor of Chinese at The George Washington University, who has been teaching since 1970.

Chaves says up until the 1989 Tiananmen Square massacre, enrollment in his department had been steadily climbing.

"They went right off the cliff after Tiananmen, and stayed down for a long period of time and only started coming back tracking the news about China getting better," Chaves says.

If the political or economic climate changes, he says, students may again lose interest in Chinese. But meanwhile, Chaves says students entering college today are already much better prepared to learn Chinese than students were 10 years ago. That's a sign the students at Yu Ying, who've been learning Chinese since age 4, will be even better prepared when they go to college.