Accessibility links
With Eye On Domestic Politics, Superpowers Meet Analysts say the Washington visit of Chinese President Hu Jintao could be among the most pivotal state visits in U.S. history. It will also be among the most complicated. President Obama and Hu each have to deal with domestic constituencies, and the two nations are locked together at multiple levels. 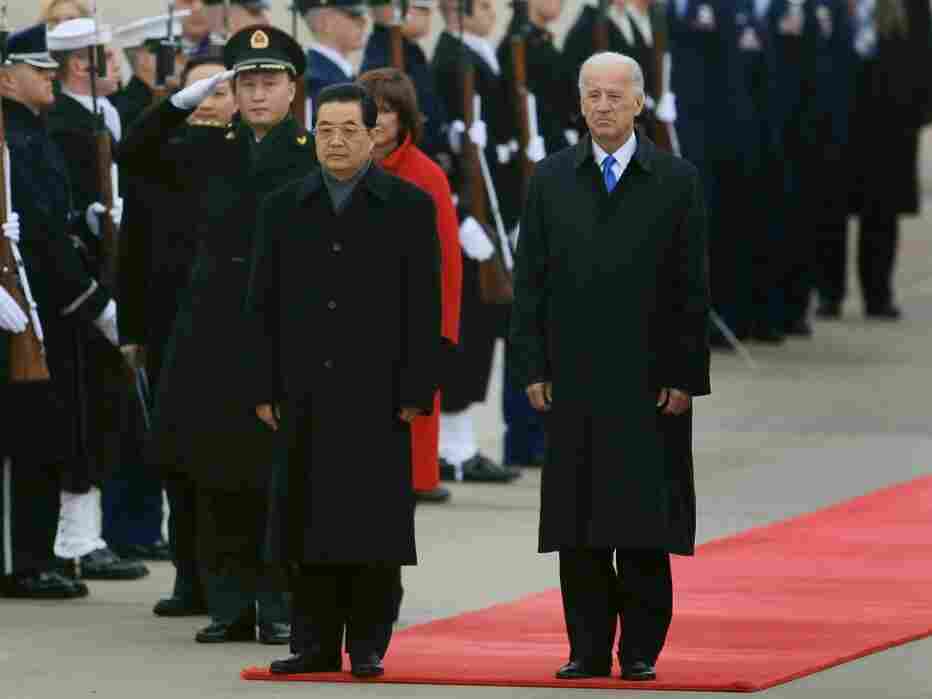 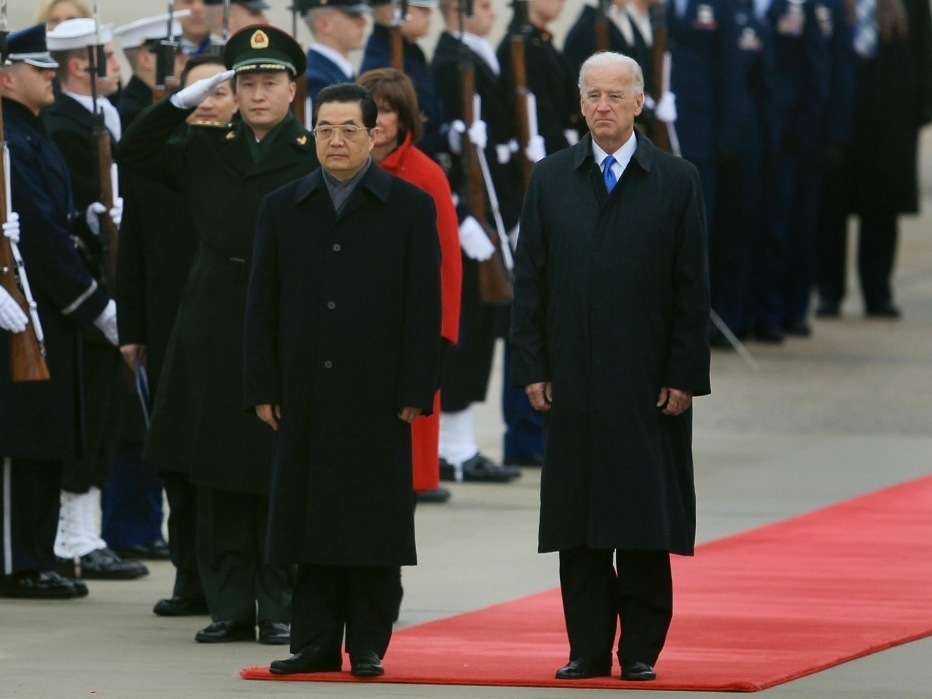 Vice President Joseph Biden welcomes Chinese President Hu Jintao to Andrews Air Force Base on Tuesday. Analysts say the Chinese leader's visit could be among the most pivotal in U.S. history. Hu meets with President Obama on Wednesday.

The Washington visit of Chinese President Hu Jintao brings together the leaders of the world's two superpowers. Analysts say it could be among the most pivotal state visits in U.S. history. It will also be among the most complicated. President Obama and President Hu each have to deal with influential domestic constituencies, and the two countries are locked together at multiple levels.

"There are so many different bureaucracies that are dealing with each other across the Pacific that the two presidents, to a certain degree, are maestros, trying to orchestrate all the various parts of their governments," says David Finkelstein, a China expert at the Center for Naval Analyses.

The United States is a mature nation, with well-developed institutions and years of practice in superpower diplomacy. China is rising so fast, it can hardly manage its own growth. Though it's not a democracy, it has some of democracy's problems.

"Even authoritarian political systems have politics," says Evan Feigenbaum, Asia director at the Eurasia Group. "Chinese leaders are trading off contending policy views all the time."

President Obama and Chinese President Hu Jintao hope to use the current state visit to strengthen relations following a difficult year. But they will also wrestle with several contentious issues:

Economic policies are among the most contentious. One group in China is linked to the big state enterprises and the big exporters. They are looking for help from the Chinese government, such as the maintenance of a low currency exchange rate so their products can be sold at lower prices on the international market.

U.S. exporters suffer a comparative disadvantage, and this is where Obama has to deal with politics: Many members of Congress favor a get-tough policy with China on the currency issue.

Obama and his team have to recognize that Hu and his team will be sensitive to the interests of the Chinese exporters. But there are other economic interest groups in China, ones the Obama administration may be tempted to embrace.

"You do have slightly more reformist people within the government," says Eswar Prasad, a professor of trade policy at Cornell University and former China economist for the International Monetary Fund. "[There is] a group of fairly influential academics who feel that, in fact, these firms would do a lot better if they were exposed to foreign competition, and that this is where China's future lies."

This issue of divided views may also apply with respect to the Chinese military. After visiting Beijing last week, Defense Secretary Robert Gates said he felt there was a "disconnect" between the civilian and military leadership.

Finkelstein, formerly the top China analyst at the Defense Intelligence Agency, suspects that any such disconnect may derive from the dearth of Chinese civilians in positions of responsibility over the armed forces.

"We have a Chinese military that is civilian-poor," he says. "There are not a lot of suits running around the Chinese defense establishment. It's mostly all uniforms, except for Hu Jintao and [Vice President] Xi Jinping."

Chinese military leaders have lately sounded more aggressive in their rhetoric than their civilian counterparts, just as some economic officials favor more open policies than others. But it may be dangerous for the Obama administration to try to support some interests in China and ignore others.

And there is a final complication that the Obama administration must keep in mind. Next year, there will be a massive leadership change in the Chinese Communist Party. Hu will go, probably to be replaced by Xi. Beijing's policies may change.

That does not mean Hu is a lame duck on this state visit. In China, the outgoing leadership has broad powers to select the incoming leadership.

"If the visit is perceived as very successful, Hu Jintao will have more leverage in terms of appointing top leadership," Li says. "If it is considered a failure, it will undermine his capacity to appoint more people to leadership positions."