Accessibility links
Abandoned Citrus Groves Produce Problems In Fla. Developers who once bought groves in the hope of turning them into residential areas have abandoned them in the post-housing-boom economy. Now, the groves have become breeding grounds for pests and diseases that threaten the rest of the state's citrus crops. 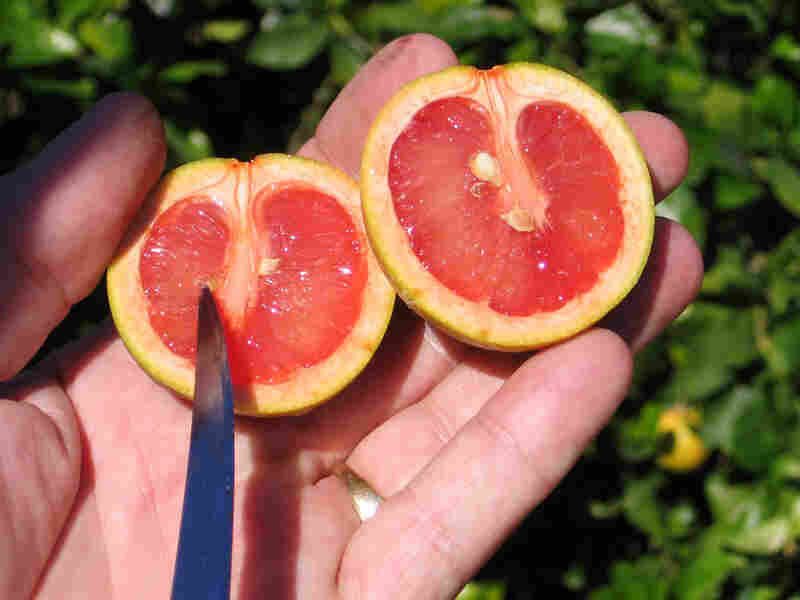 Florida is a national leader in orange and grapefruit production.

But in the past few years, landowners have given up on more than 100,000 acres of citrus groves, which have become a threat to producers of the state's signature crop.

The abandoned groves are breeding grounds for pests and diseases.

Indian River, on Florida's Atlantic coast, is known for its world-class grapefruits, oranges and tangelos. This time of year, many trees are still heavy with fruit.  But there are also many groves that aren't doing so well.

At a commercial grove in Vero Beach, there are little pieces of fruit on 140 acres of trees. But for the most part, the grove is dead.

Phil Strazzulla grew up in the citrus industry but is now mostly in the real estate business -- buying and selling agricultural acreage in the heart of Florida's citrus belt.

Strazzulla says he isn't concerned about the abandoned grove but for a healthy and productive commercial grapefruit and tangelo producer just next door. Strazzulla says the grove is already starting to decline.

Some blocks of trees are nearly dead. Some have already been pulled up. Other blocks still appear mostly healthy.

Strazzulla pulls his truck over close to a tree and picks a piece of fruit that's nearly as large as a softball.

"This is a honeybell orange," he says. "This is probably one of the best eating, best marketing oranges -- highest dollar volume, highest return to a grower. So losing this block for this grower will be painful."

Citrus growers have always had to fight disease. But in recent years, here in Florida, it has seemed that disease is getting the upper hand. Most recently, two diseases -- canker and citrus greening -- have been very difficult to control, requiring more care and nearly constant spraying.

Those diseases helped push many producers out of citrus. But Christine Kelly-Begazo says there's another compelling factor: falling land prices.

Kelly-Begazo is an agriculture extension agent with the University of Florida in Indian River County. She says during the housing boom, speculators paid top dollar for citrus groves.

"Now, if you bought acreage at that time speculating that you were going to be able to make some money off of agriculture or development or whatever, and the development boom busted, there's no incentive now," she says. "And that acreage is actually costing you money now. So they've abandoned the groves, but they're not building on them either." 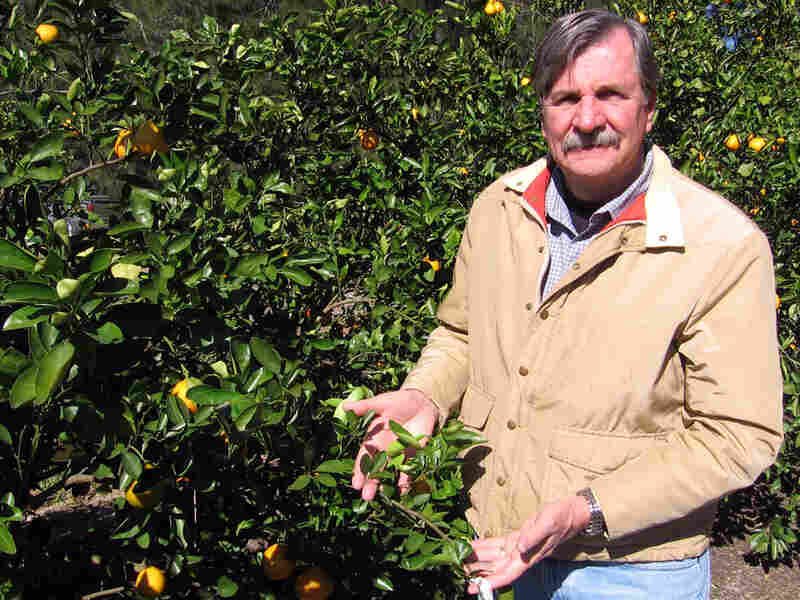 Bob Adair, a citrus researcher, owns a small grove in Vero Beach, Fla., and is working with the USDA and the University of Florida looking for better ways to control the ever-growing list of citrus diseases. Currently at the top of the list is greening disease.

It's spread by a tiny insect called a psyllid. Adair says in his grove, nearly one-third of his trees are infected. Even with treatment, the trees' days are numbered.

It's a big problem even for careful and proactive growers like Adair. Fungus and insects from infected trees quickly migrate to healthy groves nearby. And the growing number of abandoned groves makes the problem harder to control.

'We Took It Away From Its Natural Enemies'

Citrus producers in Indian River have begun a program to bulldoze and burn trees in abandoned groves. But it's costly and depends on the cooperation of sometimes absentee owners.

This is the latest of many challenges for an industry that has long grown one of Florida's most lucrative crops.

Adair says the past three decades have presented citrus growers with one new disease after another. The reason, he says, is globalization.

"What we did was, we very efficiently took citrus from another hemisphere, brought it into the United States, into Florida, and grew it as an exotic species," he says. "We took it away from its natural enemies. And what we're seeing right now is [that] all the natural enemies of citrus have found it here in Florida."

Adair says he believes, given enough time and research, the industry will find a way to effectively control greening and canker.

However, he estimates that may take up to 10 years. Many in the industry may not be able to wait that long.