Accessibility links
Obama, Hu Discuss Economy, Human Rights Issues The president welcomed the Chinese leader Wednesday to the White House, saying the visit could usher in a new era of understanding and prosperity between the two nations. But the two faced thorny human rights questions at a news conference. 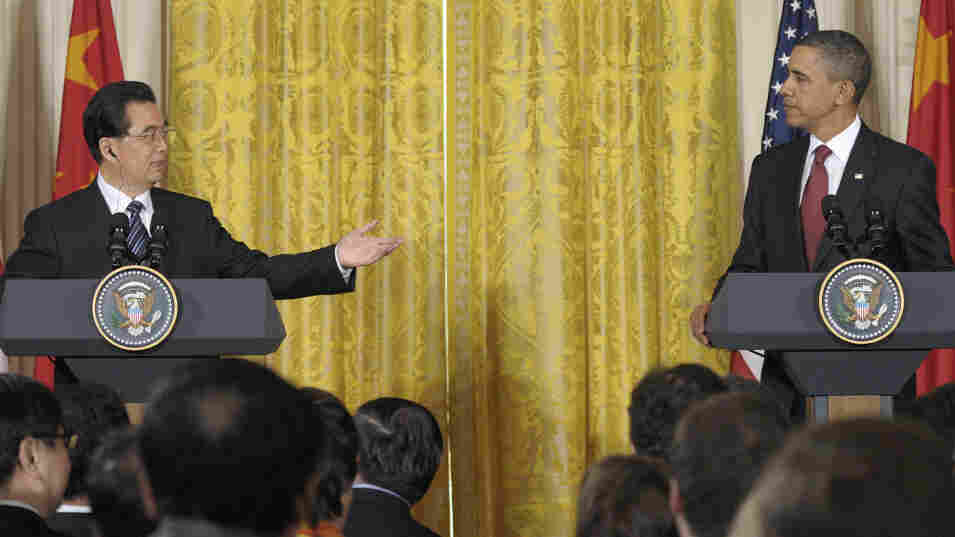 President Obama and China's President Hu Jintao held a joint news conference Wednesday in the East Room of the White House. When pressed, Hu acknowledged "a lot has to be done in China in terms of human rights." Susan Walsh/AP hide caption 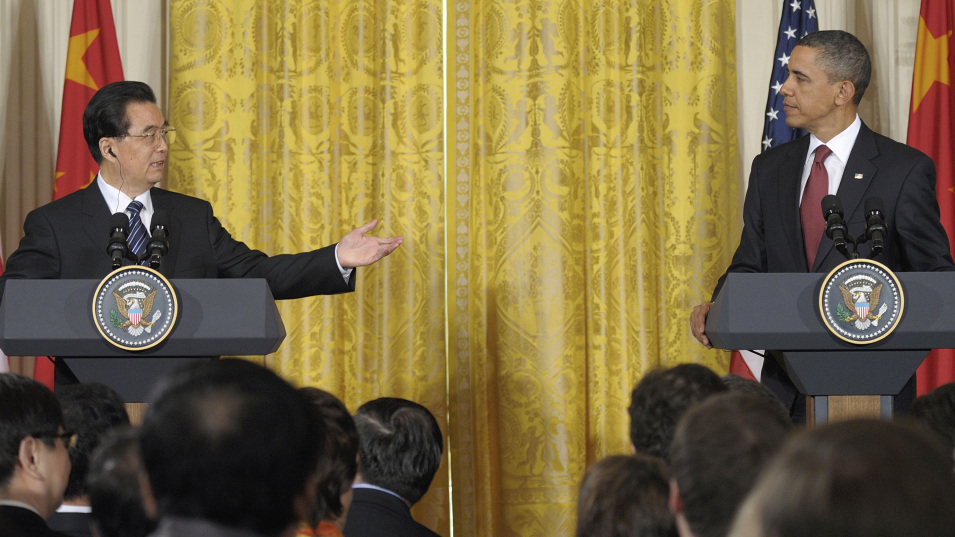 President Obama and China's President Hu Jintao held a joint news conference Wednesday in the East Room of the White House. When pressed, Hu acknowledged "a lot has to be done in China in terms of human rights."

President Obama and Chinese leader Hu Jintao pledged Wednesday to work for closer economic and political cooperation, but human rights remained a thorny issue when the two met in Washington.

Obama, speaking at a White House news conference as he stood side by side with Hu, said that in his talks with the Chinese leader, he had reaffirmed America's "fundamental commitment" to human rights.

President Obama and Chinese President Hu Jintao hope to use the current state visit to strengthen relations after a difficult year. But they will also wrestle with several contentious issues:

"The United States speaks up for these freedoms and the dignity of every human being, not only because it's part of who we are as Americans, but we do so because we believe that by upholding these universal rights, all nations, including China, will ultimately be more prosperous and successful," he said.

Asked by a Chinese reporter how the U.S. could continue to view China's rise in a benign light, Obama said he "absolutely" believed that "China's peaceful rise is good for the world, and it's good for America."

While Hu alluded briefly to the human rights issue in his opening statement at the news conference, he did not directly address a question on the subject later. When pressed, Hu blamed a translation problem for not responding.

Hu said he and Obama had discussed the issue on each of their eight meetings. He said China was at a difficult stage in its development, and in an unusually frank acknowledgment, said "a lot has to be done in China in terms of human rights."

"China is always committed to the protection and promotion of human rights," Hu said.

He said China had "made enormous progress" in its practices.

China's human rights policies have caused strains between the rival powers, with the U.S. calling on China to release jailed dissidents, including 2010 Nobel Peace Prize winner Liu Xiaobo, who was prevented from attending the Dec. 10 prize ceremony.

The New Republic: Hu Is Weaker Than We Think

Hu, making his first trip to the U.S. since 2006, also thanked Washington for its respect of Beijing's "One China" policy -- a reference to the self-governing island of Taiwan, which split from the mainland amid civil war in 1949, and to Tibet, which is already under China's control.

On improving economic ties, Obama joked at one point that "we want to sell you all kinds of stuff," including planes, automobiles and software.

Just as the summit got under way, the White House announced a slew of trade deals with China, including an announcement that Beijing has agreed to buy $45 billion in U.S. exports -- including $19 billion for 200 Boeing airplanes. However, at least some of those orders date back to 2007.

Other companies that will benefit from the package include General Electric, Honeywell and Navistar. The White House said the deals will support up to 235,000 jobs in the U.S.

China's currency valuation has thwarted U.S. efforts to bring the trade balance between the two countries into better alignment, and Obama said the United States continues "to look for the value of China's currency to be more driven by the market."

But, he added, the U.S. economy is "still three times larger than China's, despite having one-quarter of the population."

He said that in some areas, it made sense for the U.S. and China to compete -- "a healthy competition that spurs both countries to innovate and become even more competitive," he said.

The White House said Wednesday that China had agreed not to make government procurement decisions based on where the intellectual property rights for goods or services are developed or maintained. China also agreed that it would not discriminate against innovative products made by foreign suppliers operating in China.

The U.S. president said the two sides had agreed to cooperate on containing Iran and Korea.

"I also said that North Korea's nuclear and ballistic missile program is increasingly a direct threat to the security of the United States and our allies.  We agreed that the paramount goal must be complete denuclearization of the peninsula," Obama said.

NPR's Tom Gjelten contributed to this report, which contains material from The Associated Press.