Accessibility links
With Former Leader Out, Tunisians Speak Freely Life in the streets seems to be returning to normal nearly a week after President Zine El Abidine Ben Ali was overthrown. But one thing has changed: There's a lot more talking. And unlike in the old days, no topic is taboo. 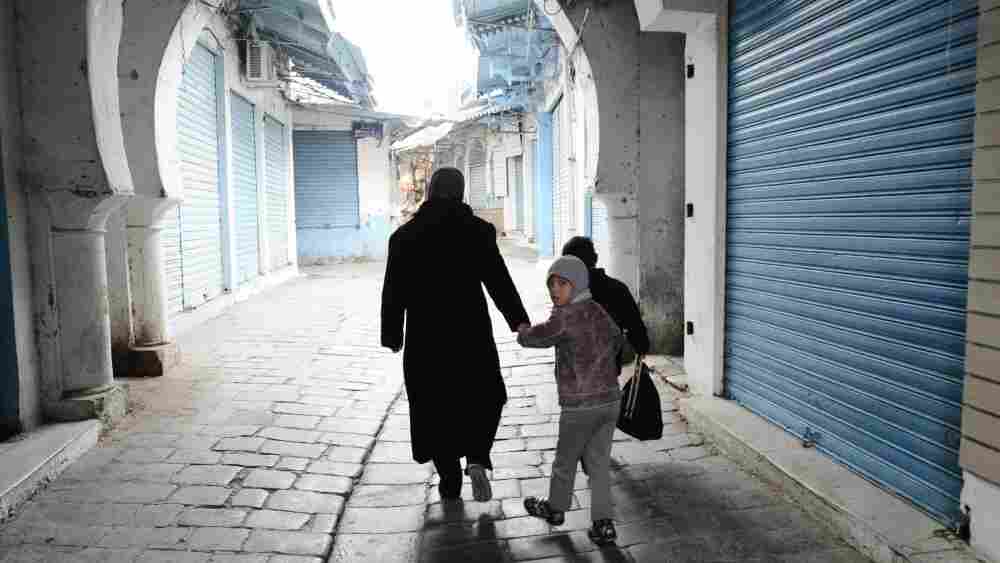 A woman and two children walk through the medina in Tunis on Tuesday. Fred Dufour /AFP/Getty Images hide caption 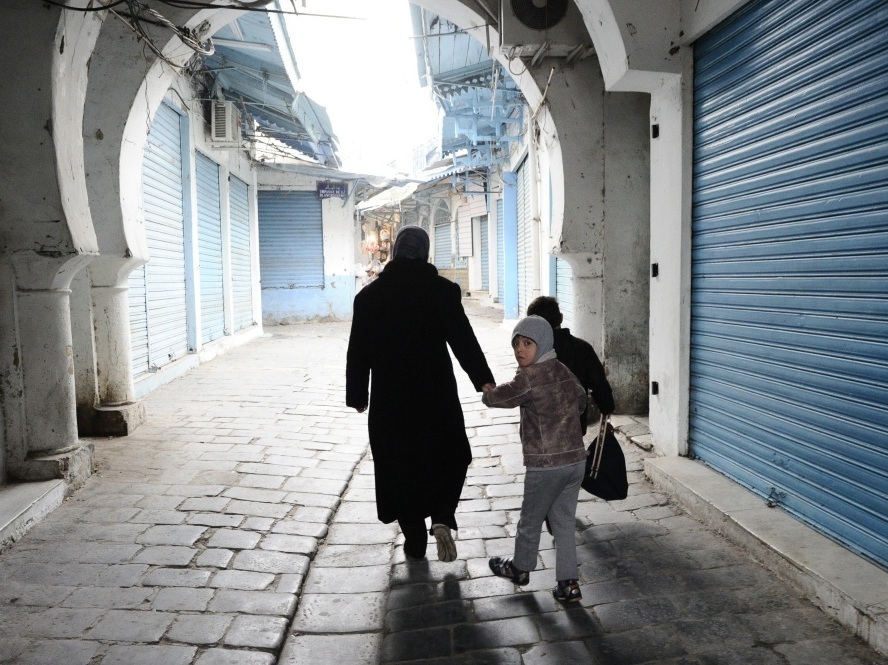 A woman and two children walk through the medina in Tunis on Tuesday.

Tunisia is struggling to put together a functioning interim government nearly a week after President Zine El Abidine Ben Ali was overthrown. Still, life in the streets seems to be returning to normal — with one exception: There's a lot more talking going on.

Cafes in the capital, Tunis, are packed with chattering coffee drinkers. Clusters of people engaged in animated discussions block the sidewalks. But unlike in the old days, no subject is taboo.

Lawyers outside Tunisia's high court say they feel like they've been released from a sort of prison. The judicial system was heavily controlled under Ben Ali.

That freedom is the best part about the revolution, Hassan Larbi says.

"People can talk freely; they can say what they want," he says. "And we can criticize the government, and that's why we are happy."

And criticize the government they have. Hundreds of protesters gathered on Tunis' central Habib Bourguiba Avenue to shout "out with the RCD!" These protesters say members of the ousted president's party have no place in a new government — even if it is only temporary. 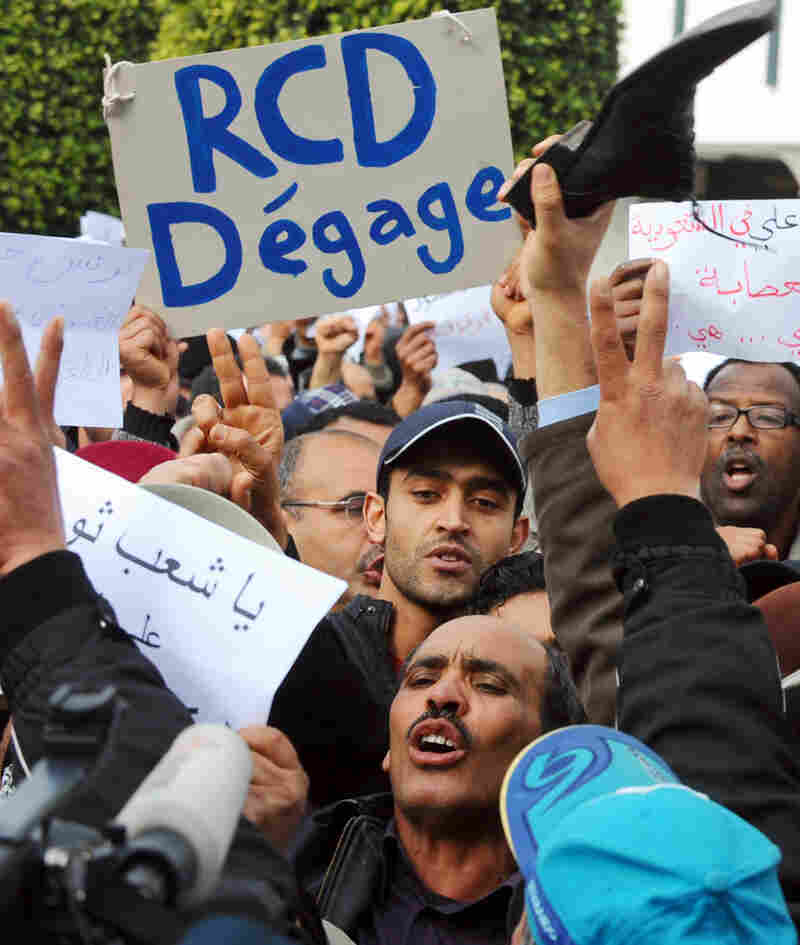 Protesters hold signs reading "RCD get out" at a march in Tunis on Wednesday. Fethi Belaid/AFP/Getty Images hide caption 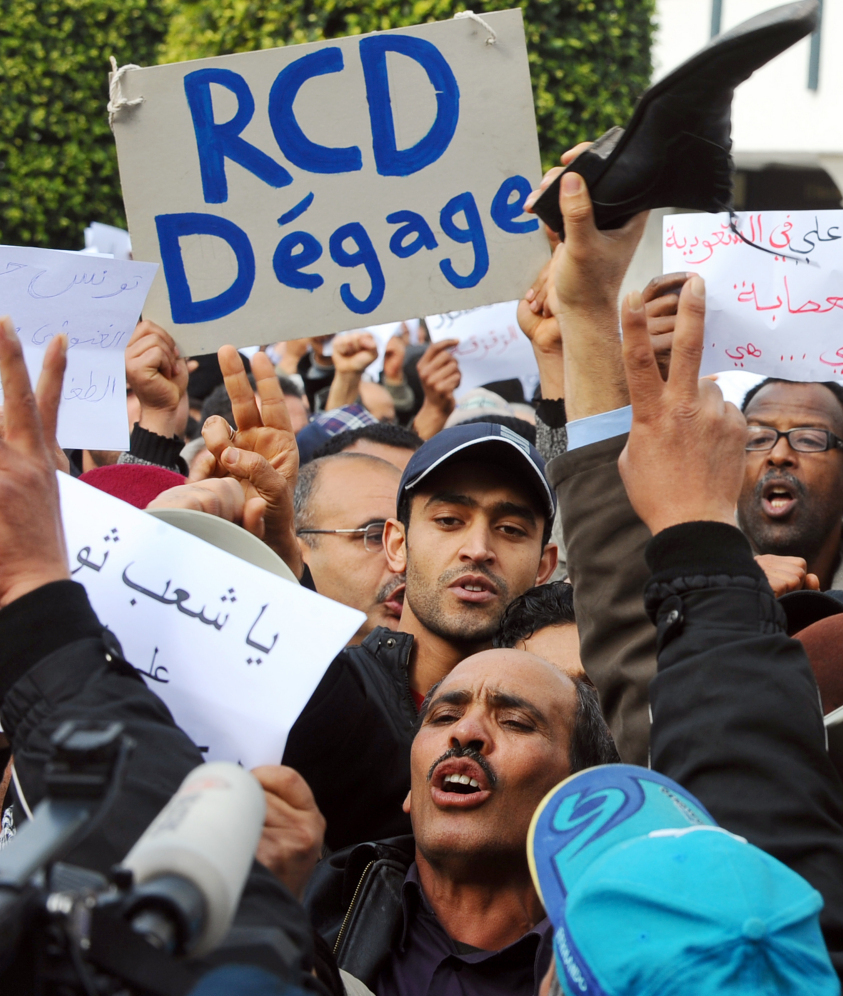 Protesters hold signs reading "RCD get out" at a march in Tunis on Wednesday.

But not all Tunisians are taking such a hard stand against the new coalition government. In a working-class neighborhood across town, 28-year-old Bessim Zitouni says he supports the government. He says Ben Ali's henchmen have all fled, and not everyone in the former president's party is bad.

"We're in a critical period now, but we're going to come through it," he says. "Tunisians have great solidarity. And that will see us through. I know we're going to have a great future."

What Is The Jasmine Revolution?

The immediate trigger for the violent protests was the self-immolation on Dec. 17 of Mohamed Bouazizi, a university graduate who had been unable to find work. After being harassed by police for selling vegetables from a cart, Bouazizi set himself ablaze.

Since Ben Ali's departure, Tunisia has cycled through new leaders rapidly, with power changing between two new chiefs of state in the first 24 hours. On Jan. 17, interim Prime Minister Mohamed Ghannouchi formed a unity government that included figures from opposition parties. But four opposition ministers stepped down a day later, bowing to protesters angry that the government still included officials from Democratic Constitutional Rally, Ben Ali's party, which has ruled Tunisia since it gained independence in 1956.

Tunisia's so-called Jasmine Revolution has sparked debate about whether Ben Ali's departure will lead to regime change elsewhere in the Arab world. Thus far, there are no serious signs of calls for change in neighboring countries, although there have been self-immolations in Egypt, Mauritania and Algeria, as well as demonstrations elsewhere.

Suddenly another man walks up and begins to argue that Ben Ali's people have to get out, that Tunisians are not free as long as they are part of the government. Zitouni insists on patience.

Scenes like this are playing out loudly all over the city, and no matter what their opinion, Tunisians say they are happy to be able to express it. But some citizens are truly afraid the provisional government will try to stay on and steal their revolution from them. They've heard promises of democracy too many times before, they say.

Several opposition figures have resigned from the interim Cabinet, saying they refuse to serve with those in the party of the former dictator. But Omeyya Seddik, a member of the main opposition party, says his party is trying to convince those lawmakers to come back. This government must work, he says.

"We had such an extraordinary reversal of things in such a short period of time," he says. "Tunisia doesn't have the means to put a democratic system in place immediately. We need a transition period to carry out some reforms that will lead to elections in six months."

As he looks out the window at the protesters, Seddik says he understands their concerns. But if the transitional government fails, he says, the country risks being taken over by the military and police, a catastrophic scenario.

Members of Ben Ali's party have run Tunisia for decades, he says, and the Tunisian people will have to put up with them for a little while longer.