Accessibility links
Gleaning A Harvest For The Needy, And Fighting Waste Of Farm Produce On U.S. farms, gleaning is making a comeback, as a national anti-hunger organization turns to the ancient practice to help feed the poor. And gleaning also gives farmers a way to use produce that would otherwise be wasted. 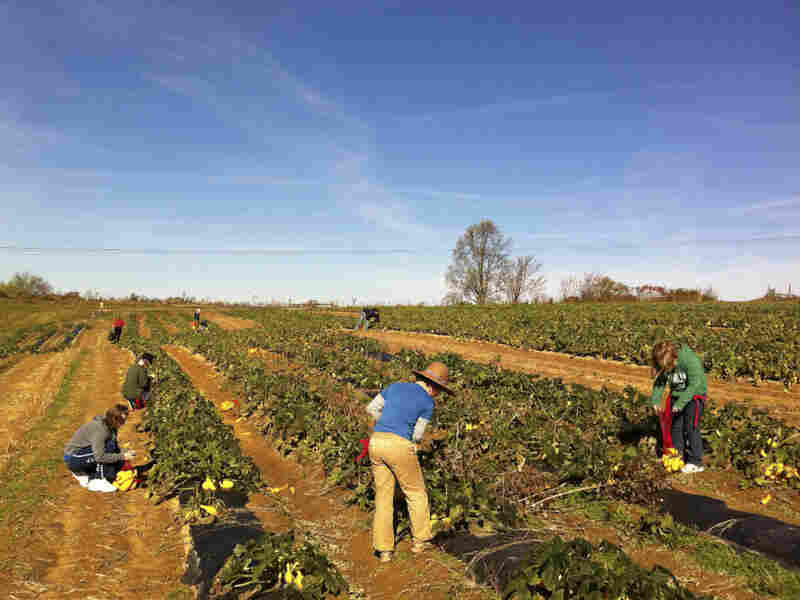 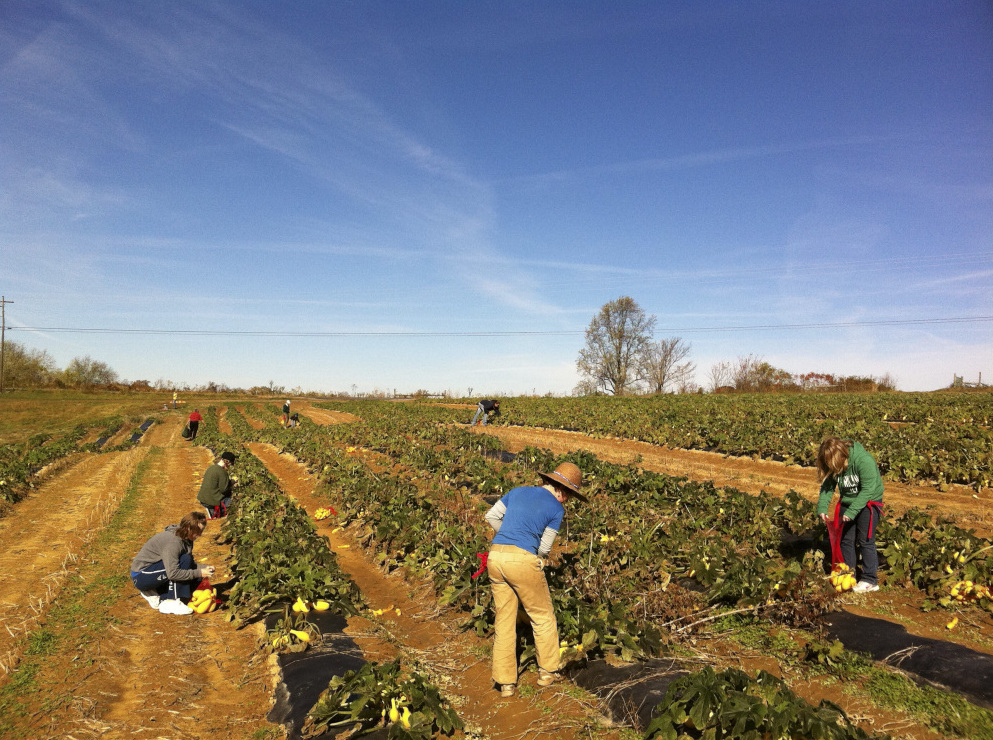 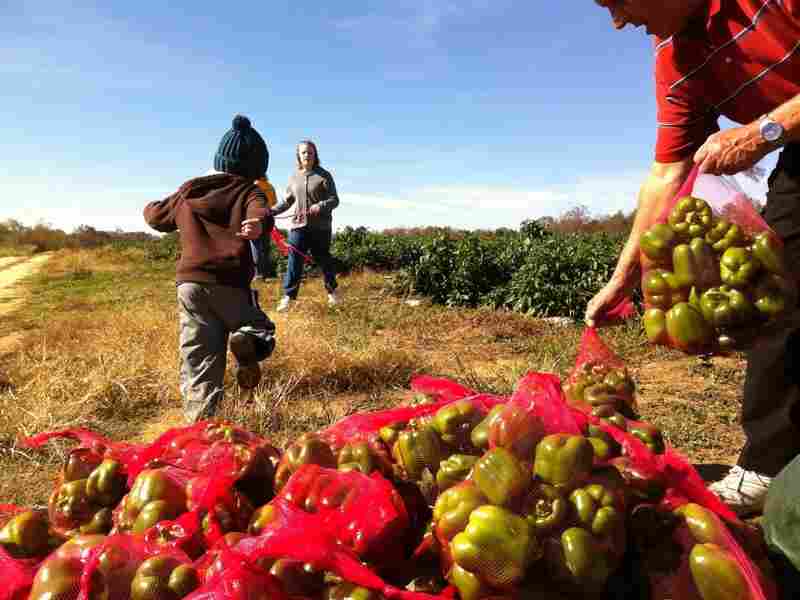 Nathaniel Smart, 5, drops a bag of bell peppers on a growing pile and runs off to pick more. Blake Farmer/WPLN hide caption 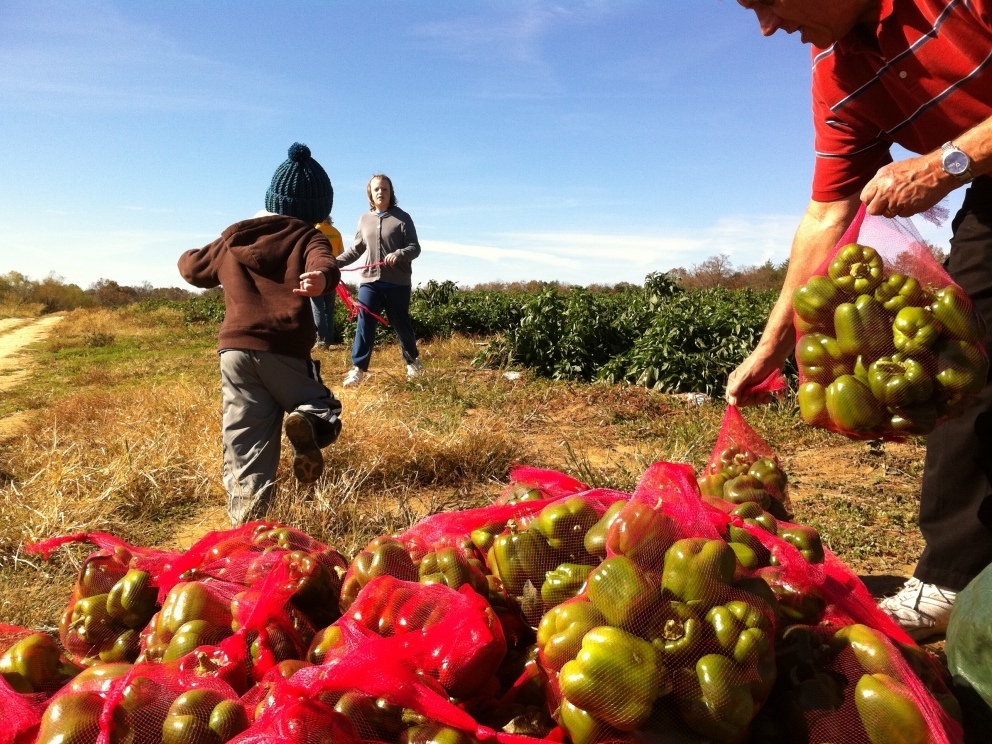 Nathaniel Smart, 5, drops a bag of bell peppers on a growing pile and runs off to pick more. 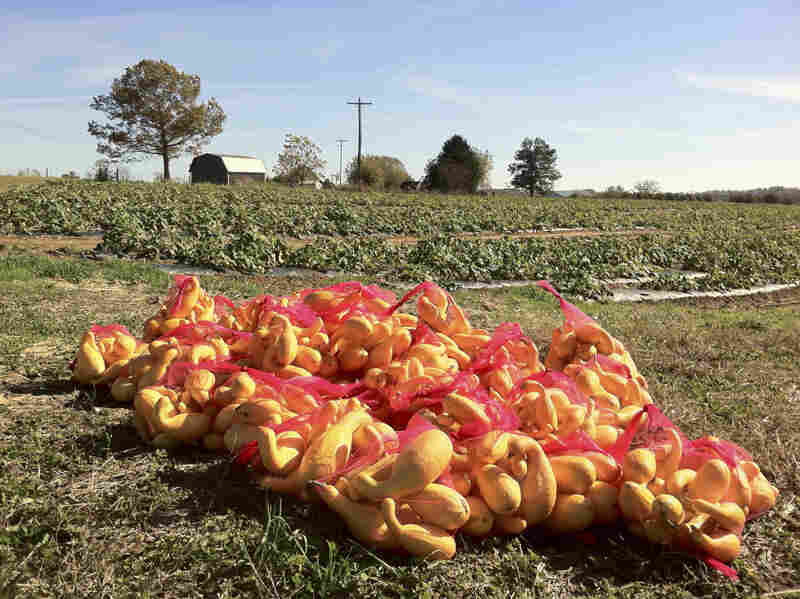 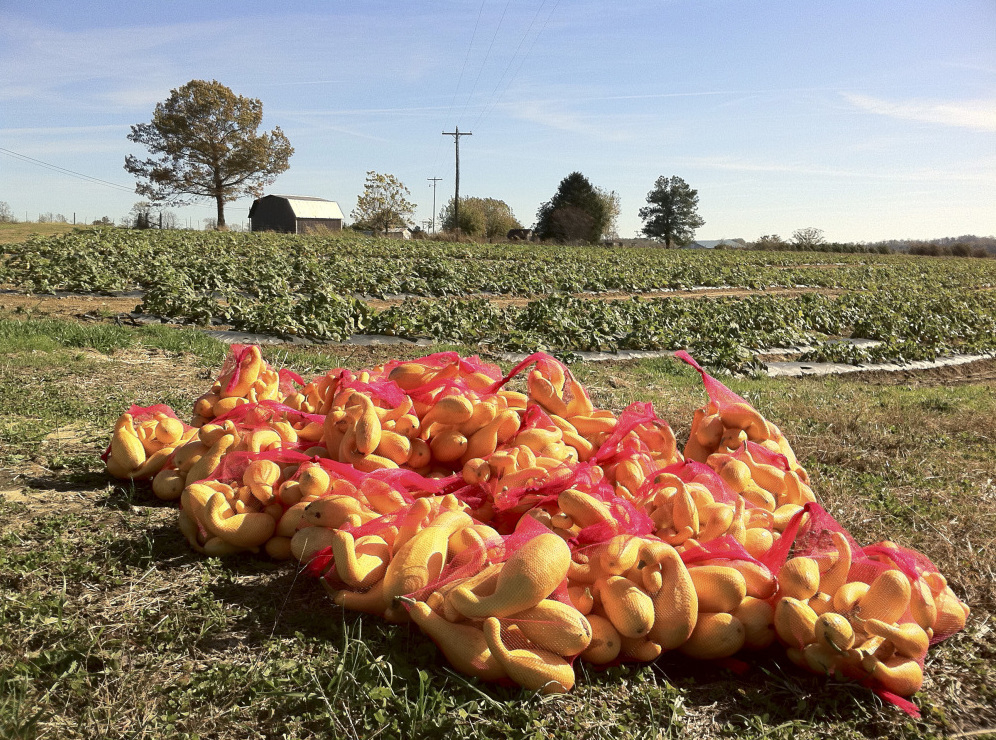 Volunteers from the Society of St. Andrew gleaned 350 pounds of squash at Jackson Farms.

On U.S. farms, gleaning is making a comeback, as a national anti-hunger organization has turned to the ancient practice to help feed the poor. And it also gives farmers a way to use produce that would otherwise be wasted.

In the Old Testament, farmers are told not to pick their fields and vineyards clean, but instead to leave the edges for orphans, widows and travelers. In the modern day, gleaning is more about preventing would-be waste.

Food gets left in the field for all kinds of reasons. Two big ones are that mechanical harvesting misses a lot — and sometimes the crops aren't pretty enough for supermarket shelves.

"The statistics are that 96 billion pounds of food are left — this is pre-consumer food — goes to waste in this country," says Linda Tozer of the Society of St. Andrew, an organization that coordinates farmers around the Southeast and out West.

And that food-waste estimate, from the U.S. Department of Agriculture, is going up, not down.

"What we are trying to do is build a network that will take food that would not make it to market for a variety of reasons," Tozer says, "and get it to agencies that are feeding the hungry."

The Society of St. Andrew recently added an office in Tennessee. At Jackson Farms in Pikeville, volunteer Nathaniel Smart, 5, heaved a mesh bag of red and green bell peppers from a scale and dropped it on a growing pile.

Volunteers like Smart and his dad are key to what makes gleaning work — free labor. They went down rows of plants, picking ripe vegetables.

There's nothing wrong with these peppers, but they're not worth farmer Johnny Jackson's time. He says he already has more than he knows what to do with in a chock-full storehouse.

"Supply and demand is the first rule of the deal," Jackson says. "And if you got more supply than you have got demand for it, then it's going to go to waste."

Jackson has nothing to lose. The motivation, he says, has little to do with a biblical command, though he is happy to feed the hungry. He'll also pocket a tax deduction worth the value of what he gives away.

But Jackson also says it's hard to plan for gleaning. He has just a few days between when he has decided that he has sold all he can, and when the produce goes bad.

On short notice, the Society of St. Andrew gathered a preacher, a Girl Scout troop and a few neighbors, like Mary Beth Sanders.

"I just got an e-mail, some farmer friends passing around word of this activity," she says.

Sanders' frayed straw hat gives her away as a part-time farmer. But even she is surprised by how much goes to waste.

"I mean, you pass farms up here all the time, just peppers rotting on the ground or on the vine," she says. "It's not cool."

On this day, the scales have measured more than a thousand pounds of produce. Volunteers pack the rescued rations in a church van and a pickup truck, bound for a food pantry and the sheriff's office.

Tozer says her gleaners could spend all weekend here picking several thousand pounds more, but she has her own logistics problem. No one else is lined up to take the vegetables.

"Isn't that horrible?" she says. "But we have done this much, and that's more than if we hadn't shown up, so that's the way we've got to look at it."

Tozer's organization gleaned more produce than ever last year — 18 million pounds. But that's still small potatoes compared with how much will never make it to the dinner table.