Accessibility links
Larynx Transplant On Calif. Woman Successful Surgeons in California are reporting that they have transplanted a woman's voicebox and restored her ability to speak and breathe. The 52-year-old woman from Modesto had been without her voice for more than a decade.

A surgical team in California on Thursday announced they had done something spectacular: They replaced the larynx of a 52-year-old woman who hadn't been able to speak or breathe on her own for more than a decade. Brenda Jensen's larynx had been severely damaged when, under heavy sedation during a previous hospital stay, she pulled out a ventilation tube.

Jensen, of Modesto, Calif., is believed to be only the second person in the world to get a larynx transplant. 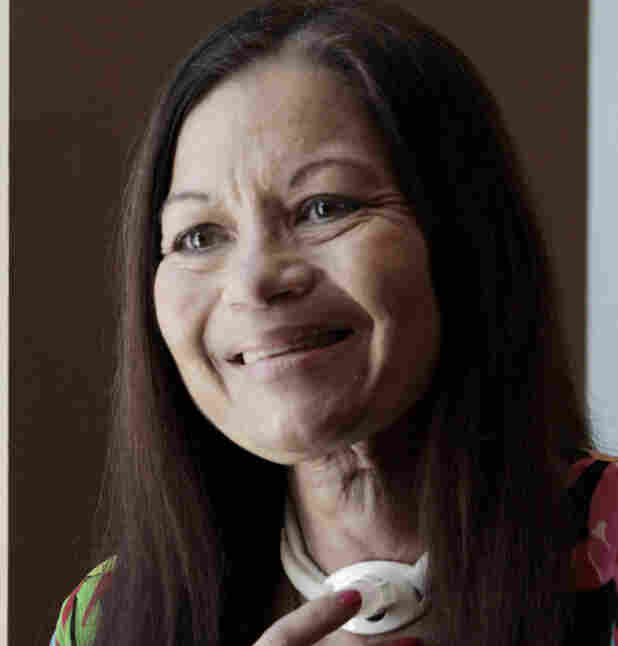 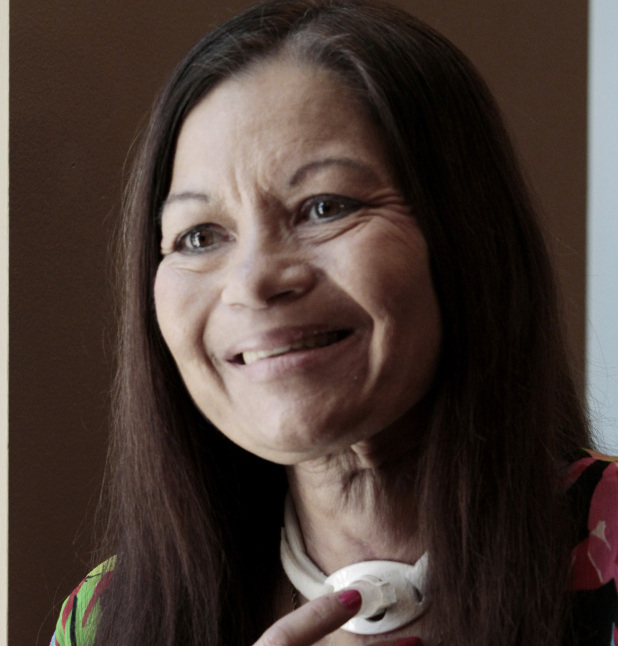 Brenda Jensen demonstrates her transplanted larynx at the University of California, Davis MIND Institute on Thursday.

A few months ago, before her surgery, Jensen says, her kids used to laugh at her because she sounded like a robot.

"My 12-year-old granddaughter, Samara, she never heard my voice before cause it was 12 years ago since I spoke," Jensen said at a news conference Thursday. "She only knew me as talking with my mechanical robot voice, and she called my machine the talkie-talkie machine."

During an 18-hour surgery last October at the University of California, Davis, Medical Center, doctors removed Jensen's voice box, her thyroid gland and her trachea. Then, they put a donated organ — from an anonymous accident victim — back into her throat, reconnecting the intricate nerves and muscles needed to bring Jensen's voice back to life.

Suture Smaller Than A Human Hair

UC Davis surgeon Gregory Farwell led the operation. He says much of the surgery was done looking through a high-powered microscope.

"The neck is an unbelievably complex structure," he said. "The blood vessels are small. The nerves are incredibly small and there's a lot of them."

For Jensen, Farwell and his team put together five different nerves. These nerves, on average, are 1 to 2 millimeters, and the suture used is smaller than a human hair, he said.

Larynx transplants almost never occur, say physicians, because they're rarely a life-saving procedure. Doctors are reluctant to put a patient on powerful drugs needed to prevent the body from rejecting a transplanted organ.

But Jensen was the ideal candidate: She was already taking the drugs after a kidney and pancreas transplant five years ago.

An international team of surgeons came together for the operation. Dr. Paolo Macchiarini from Stockholm was in charge of removing the donated organ from the accident victim.

He says he practiced on animals every day for years to prepare for the surgery.

"Brenda was the first human being where I did it," Macchiarini said. "I was very much afraid. When we released the cramps from the artery, we saw these beautiful organs just flushing full of blood and working properly."

Jensen is still breathing and eating through a tube. But she does swallowing exercises every day and is beginning to feel sensation back in her throat. But perhaps the most delightful discovery, she says, is that she can smell for the first time in years because air can finally pass through her nose.

"I've been smelling food like crazy," she said. "I go to the store to buy cleaning supplies and everywhere you go you smell food. It's just been a really, really unbelievable experience, smelling freshly cut grass, the air, breathing the air, taking your garbage out, that's a real good smell."

Depending on how Jensen's recovery goes, doctors hope to eventually remove her breathing tube.