Accessibility links
Elaborate Nest Decorations Show Bird's Vitality A black kite nest decorated with bits of white plastic may mean it's the home of one tough bird, says a new study. The white plastic somehow signals "keep away from my eggs" — and only the strongest birds threw down these warnings. 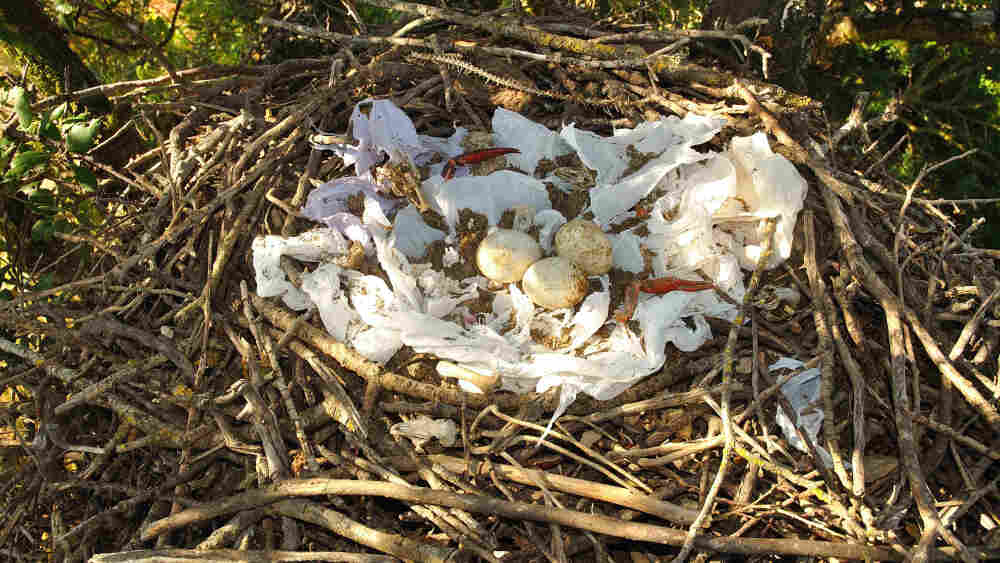 The animal world is a noisy one with a vast vocabulary. A lot of what animals are saying is about sex, as in, "Hey, I'm here and available." 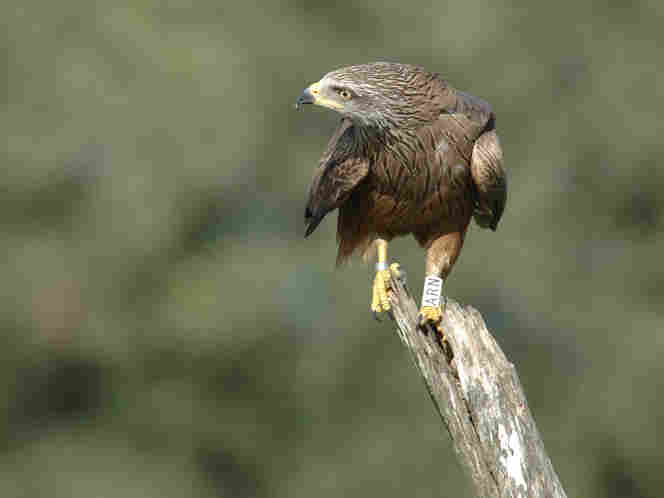 An eight-year-old black kite watches an intruding individual from its perch. Since the 1980s, researchers have been tagging birds in a population to track them through their life spans. F. Sergio/AAAS/Science hide caption 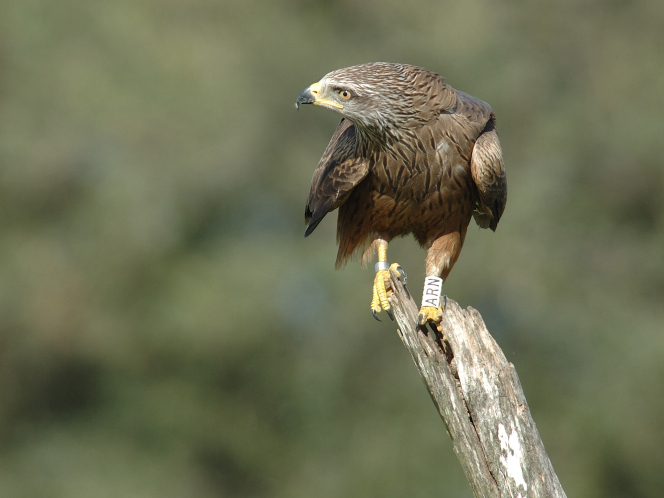 An eight-year-old black kite watches an intruding individual from its perch. Since the 1980s, researchers have been tagging birds in a population to track them through their life spans.

But scientists in Spain have discovered a very different kind of signaling by birds called black kites. The raptors decorate their nests with plastic — apparently to scare other birds off.

It's not just any kind of plastic that works, though — it's only white plastic; bits and pieces the birds scavenge and lay inside their nests alongside their eggs.

Biologists wondered for years why these big predatory birds do this. So a research team set up in a national park in Spain and recorded and videoed kites in 127 nests for five years. Slowly, this decorating habit started to make sense: It was a signal by the strongest birds that they were tough and could protect their nests.

Backing Up The Bravado

Lots of animals do things to show either toughness or sexual allure — they'll dance or bellow or display some overgrown body part. But Fabrizio Sergio of the Spanish High Council for Scientific Research says this is a pose of a different color.

"The most funny thing is probably that it's done in this case not through some parts of the body such as the plumage or a very pretty song," he says, "but it's made through some objects which are collected and constructed through the nest."

A male who is in his prime is going to put more decoration on because he can back up his signal. It's not bluff.

Sergio and his team think it's a construction that signals bravado. Think Harley-Davidsons and tattoos.

But the bravado is real because only the stronger, tougher nesting pairs decorate this way. The weaker birds — the youngest and the oldest — do not. In fact they actually rejected the plastic when scientists added it to their nests.

"Some of the individuals actually did not want it at all; they immediately removed it," Sergio says. "And this was very extraordinary. That requires some capacity to self-assess, realize that the signal that you find on your nest is off and then adjust it," he says.

One reason could be that when the kites add plastic, their nest immediately draws attention and attacks by other birds looking for food or a new nest. The tougher birds fight them off, and after that, they're pretty much left alone. But weaker birds don't have the wherewithal to fight a lot.

"The young males or the older, more senescent males do it less because they're just less able to be successful if there is an aggressive contest that follows," Nowicki says.

Apparently they know it. That's why the weaker birds threw out plastic they didn't place there — they realized it was false advertising that could lead to trouble. Nowicki says that's no small feat. He explains that this signaling behavior works because the attacks keep weaker birds from bluffing. It means in scientific terms that the white plastic signal — "I'm tough" — is honest.

"A male who is in his prime is going to put more decoration on because he can back up his signal," says Stephen Nowicki, an evolutionary biologist at Duke University. "It's not bluff."

Why Advertise The Nest?

But is it really wise to advertise where a bird's eggs are? One bird biologist, Gerald Borgia at the University of Maryland, says he doesn't buy the toughness signal idea.

He thinks the kites may be doing something quite different with the plastic — camouflaging the eggs. He says this might be an alternative explanation. After all, the eggs are white, and the kites choose white plastic. Maybe an array of white plastic in a nest is simply there to confuse predators that eat eggs.

The kite study was published in the journal Science, and it may take a few more studies to confirm what's going on here. But for biologists, this is more than just bird weirdness — it's a clue to how evolution winnows out winners from losers.